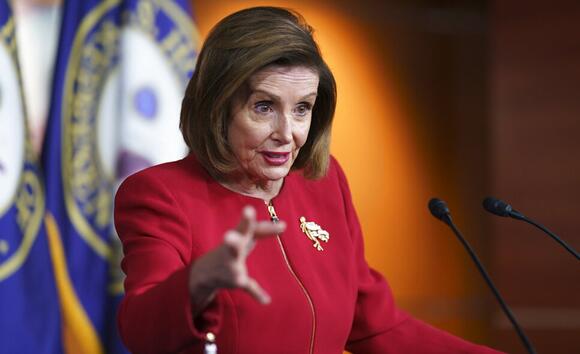 D emocrats and Republicans are in a standoff over raising the debt ceiling and passing a $3.5 trillion infrastructure bill, widening the path toward a government shutdown and an unprecedented default on the national debt.

The House passed a bill on Tuesday that would fund the government until December and suspend the debt limit until 2022, but GOP senators have been adamant that they will not support any bill that increases the debt. Republican Senate leadership said that it will block the 10 votes needed to bypass a filibuster on the bill.

If it doesn’t pass, the government will shut down on Oct. 1.

The only backup plan for the Democrats is to include the raised debt ceiling within the $3.5 trillion infrastructure deal championed by President Joe Biden. But Speaker of the House Nancy Pelosi signaled to colleagues in a letter on Monday that she will not move to vote on the bill in the House if her party cannot secure the votes of centrist Democrats in the Senate.

Sens. Kyrsten Sinema of Arizona and Joe Manchin of West Virginia have both publicly said they won’t vote for $3.5 trillion in spending but haven’t named a price they would support. House liberals, meanwhile, are pressuring for a vote regardless of Senate viability. A similar situation regarding a 2009 climate change bill that passed the House but never came to the Senate floor skewered centrist Democrats in their home districts, resulting in a lost bill and a lost majority in the following midterm elections.

Without a deal on the debt ceiling, which governs the money the Treasury Department can pay out, the department first relies on “extraordinary measures” for payments including Social Security.

These measures are expected to run dry in mid-October, after which the government would default on such payments and launch into uncharted fiscal waters.

Upon her return to Capitol Hill from a meeting at the White House on Friday, House Speaker Nancy Pelosi told reporters that a deal was within reach on congressional Democrats’ sweeping social spending package.
POLITICS・4 HOURS AGO
WashingtonExaminer

House Majority Leader Steny Hoyer said that Democrats will aim to bring votes on the $1.2 trillion bipartisan infrastructure bill and a sweeping social programs package in the House next week.
PRESIDENTIAL ELECTION・30 MINUTES AGO
WashingtonExaminer

Democrats may end up nixing a plan to hike taxes in order to pay for a massive social welfare spending package.
CONGRESS & COURTS・1 DAY AGO
MarketWatch

As the party tries to reach agreement, here are key proposed categories for the spending.
CONGRESS & COURTS・1 DAY AGO

WASHINGTON, Oct 21 (Reuters) - U.S. Senator Joe Manchin said on Thursday that Democrats in Congress are not going to reach an agreement "anytime soon" on the broad outlines of President Joe Biden's ambitious expansion of social programs. The warning from the key centrist lawmaker indicated that Democrats are still...
CONGRESS & COURTS・20 HOURS AGO
Business Insider

Democrats are scrounging for new ways to pay for Biden's economic agenda, as the Arizona senator moves against tax increases on the wealthy.
PRESIDENTIAL ELECTION・1 DAY AGO
POLITICO

“I don’t know what the red lines are for one U.S. senator who has an amazing amount of power,” Rep. Veronica Escobar said of the Arizona centrist.
INCOME TAX・1 DAY AGO
POLITICO

Democrats weigh slashing $200B in housing aid from spending bill

Democrats are negotiating the cuts as they try to reconcile demands from centrists to slash the size of the bill with resistance from progressives.
CONGRESS & COURTS・1 DAY AGO

WASHINGTON — More than 70 days ago, the U.S. Senate handed President Biden his biggest bipartisan victory yet — an infrastructure bill providing $550 billion in new spending, and $1 trillion overall, for highways, transit, water and broadband. “This historic investment in infrastructure is what I believe you, the American...
CONGRESS & COURTS・1 DAY AGO
POLITICO

Centrists are getting down to brass tacks. Progressives are making concessions. Party leaders insist they're close to a deal this month.
CONGRESS & COURTS・2 DAYS AGO
Business Insider

All GOP Senators moved to block debate on a major voting rights bill that Democrats framed as the last chance to save American democracy.
CONGRESS & COURTS・2 DAYS AGO
Reuters

Factbox: Biden, Democrats $2 trillion spending plan: What is in, what is cut?

WASHINGTON, Oct 20 (Reuters) - U.S. President Joe Biden and Democrats in Congress rolled out an ambitious $3.5 trillion spending plan in August to support his economic policies. The measure is being whittled down to reach a compromise that all Democratic legislators will support. After a flurry of White House...
U.S. POLITICS・2 DAYS AGO

Manchin's $60,000 income threshold for Biden's expanded child tax credit could cause 37.4 million kids to lose out on federal aid

It amounts to 60% of eligible kids across the US facing sharp cuts, including many in West Virginia, according to a Niskanen Center analysis.
CONGRESS & COURTS・3 DAYS AGO
AFP

President Joe Biden has pledged to enact the toughest environmental policies in US history but his plans look dead on arrival thanks to one senator who has pocketed a fortune from fossil fuels. The $150 billion Clean Electricity Performance Program (CEPP) -- a cornerstone of Biden's sweeping domestic agenda -- would reward utilities that switch to renewable energy and penalize those that do not. Experts say the program would cut most greenhouse gas pollution tied to electricity generation, which accounts for roughly a quarter of US emissions. But Joe Manchin, a conservative Democrat from coal-rich West Virginia who heads the Senate's energy committee, argues that throwing cash at companies already moving away from fossil fuels is wasteful.
CONGRESS & COURTS・2 DAYS AGO
9&10 News

President Biden is going all in to push his legislative agendas through, meeting with lawmakers who could derail his proposals. Biden’s schedule Tuesday was blocked off virtually the entire day as he met with members of Congress behind closed doors. He met with several moderate Democrats that could hold the...
PRESIDENTIAL ELECTION・2 DAYS AGO
Washington Times

Congressional Democrats touted their uniform resolve to finally strike a deal on President Biden’s $3.5 trillion expansion of the federal welfare state on Tuesday, but despite the rhetoric and another attempt by the president to mediate, strong divisions remain over how to move forward. Senate Majority Leader Charles E. Schumer...
CONGRESS & COURTS・2 DAYS AGO

Some House and Senate Democrats are mulling a new carbon tax after Sen. Joe Manchin struck down the core of the Democrats' climate plan in the reconciliation bill. Manchin "doesn't see a formulation that might get past his reservations with regard to rewarding utilities for actions they're already taking." He advocates compensating utilities that transition away from fossil fuels and toward renewables such as wind, solar, and nuclear energy.
3 DAYS AGO
Shore News Network

WASHINGTON (Reuters) – Negotiators of a massive U.S. bill that would invest up to $3.5 trillion to expand social programs and attack climate change have made progress in recent days but have not yet brought a deal, U.S. Senate Majority Leader Chuck Schumer said on Monday. “Over the last weekend...
CONGRESS & COURTS・3 DAYS AGO
newstalkflorida.com

Here Are All The Green New Deal Handouts Democrats Wedged Into Their $3.5 Trillion Budget

Democrats have inserted numerous provisions and subsidy programs into their $3.5 trillion budget that would benefit green energy companies and speed the transition to renewables. “The whole thing is ridiculous,” Myron Ebell, the director of the Center for Energy and Environment at the Competitive Enterprise Institute, told the Daily Caller...
CONGRESS & COURTS・4 DAYS AGO
VTDigger