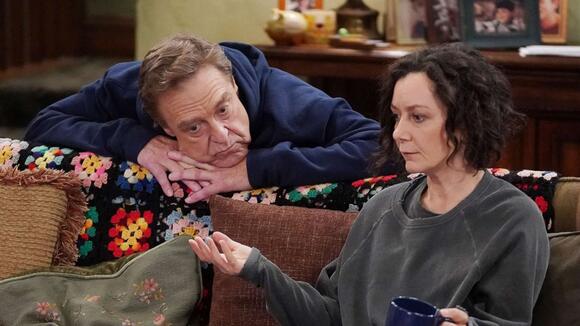 "The Conners" kicked off its fourth season with a live episode, ending with a touching tribute to comedian Norm Macdonald, who died last week at the age of 61 after a long, private battle with cancer.

"Wait, what?" Laurie Metcalf, appearing shocked while also breaking the fourth wall, responded before the two of them joined the opening scene, already in progress.

The episode ended with the cast, seated on the show's iconic sofa, holding up a sign that read, "Dedicated to the memory of our friend and colleague, Norm Macdonald."

The premiere continued one of last season's storylines, in which Darlene (Gilbert) tries to navigate hurdles in her relationship with Ben, played by Jay R. Ferguson.

Darlene, trying to salvage their relationship, proved her commitment to him by putting a deposit down on an apartment. This provided another opportunity to play up the fact that the episode was filmed live, when the camera followed Gilbert as she ran from one set to the other to find him.

"Better run, it's a lot further than you think," warned Metcalf. "It's the set opposite Wellman's Plastics."

Following a year filled with loss, 2021 has been marked by the deaths of multiple iconic actors, artists, sports legends, and other television personalities. These are the stars we've lost this year. 2 of 77 Getty Images. Melvin Van Peebles. Filmmaker Melvin Van Peebles has died at age 89. The...
CELEBRITIES・25 DAYS AGO
Popculture

'SNL': Norm Macdonald Honored on 'Weekend Update' After His Death

Comedy legend Norm MacDonald passed away on Sept. 14, and Saturday Night Live took time out of their premiere to honor the former host of The Weekend Update. Pete Davidson stopped by the famed desk to talk to hosts Colin Jost and Michael Che to talk about attending the Met Gala and during that scene, the comedian wore a tie-dye t-shirt featuring MacDonald's face.
TV & VIDEOS・13 DAYS AGO
959theriver.com

During Weekend Update on Saturday Night Live, the show paid tribute to the late Norm Macdonald. Pete Davidson wore a shirt with Norm Macdonald’s photo on it during one of his bits. Also, instead of closing the segment normally, Colin Jost and Michael Che played old clips of Norm from...
CELEBRITIES・13 DAYS AGO
ComicBook

Just over two weeks ago, news surfaced of Norm Macdonald's passing. The Saturday Night Live alumnus had been fighting a private battle with cancer for nearly a decade, and he passed away at 61 years of age. With the Season 47 premiere of SNL on October 2nd, current Weekend Update hosts Colin Jost and Michael Che closed their segment out by offering a tribute to the late comedian.
TV & VIDEOS・13 DAYS AGO

Being a stand-up comedian is hard enough without distractions. Add those in, and suddenly making people laugh becomes a lot less fun. Just ask Mike Wysocki, 48, of Brentwood, who couldn’t wait for the return of indoor shows after months of them being off limits due to the COVID-19 pandemic. Outdoor shows proved to be trickier than he expected, with audience members getting up mid-show to leave on their loud motorcycles or, on one occasion, doing poolside comedy with folks in the water barely paying attention.
PITTSBURGH, PA・13 DAYS AGO
Marconews.com

“Saturday Night Live” kicked off its 47th season with host Owen Wilson Saturday night, and the show did not disappoint. Wilson, an actor best known for comedic roles in movies like “Wedding Crashers,” allowed his humor and quirkiness to shine throughout each sketch. The 52-year-old even had support in the audience from his brothers, actors Luke and Andrew Wilson.
PUBLIC HEALTH・14 DAYS AGO
UPI News

Oct. 3 (UPI) -- Saturday Night Live paid tribute to its late cast member Norm Macdonald during its Season 47 premiere. Macdonald, who appeared on the show 1993-99, died of cancer last month. He was 61. "It is a bittersweet night for us tonight," Colin Jost said at the top...
CELEBRITIES・14 DAYS AGO

The most unlikely star in late night may now be Nick Bernstein, CBS’ senior vice president of late night programming, West Coast. Bernstein has become an almost nightly presence on “The Late Late Show With James Corden,” as the host and the show’s producers dream up new and elaborate ways to put their boss in weird and uncomfortable situations on camera. Bernstein began popping up on the program earlier this summer after he was vaccinated and cleared to return to the show’s studio. (Without an audience until recently, “Late Late Show” had started relying more on producers and crew members for...
TV & VIDEOS・2 DAYS AGO
Insider

Alan Ruck has a love-hate relationship with Ferris Bueller’s Day Off — which, for many years, was far more the latter emotion. A guest Thursday on the WTF With Marc Maron podcast, the Succession star talked about his tumultuous career before nabbing a series of solid projects, including Speed and Spin City. Before he landed the role of Connor Roy on the award-winning HBO hit series, Ruck was best known for playing lovable goof Cameron Frye in the 1986 classic Ferris Bueller’s Day Off. As much as he loved the role and making the John Hughes film with his real-life pal and star...
LOS ANGELES, CA・3 DAYS AGO
The Independent

Saturday Night Live is back with four first-time hosts. Kim Kardashian West and Owen Wilson have already hosted the first two episodes of the season but this week (October 16) Bohemian Rhapsody star and new Bond villain Rami Malek will host while Young Thug will appear as the musical guest.On 23 October, Jason Sudeikis will take over as host, with Brandi Carlile performing.Wilson, Kardashian West, Malek, and Sudeikis will all be first-time hosts.pic.twitter.com/5E6HS5YnrC— Saturday Night Live - SNL (@nbcsnl) September 22, 2021Saturday Night Live returned on 2 October on NBC in the US after a summer hiatus. This...
TV & VIDEOS・1 DAY AGO

John Cena strips once again to his skivvies as a homicidally misguided costume vigilante in the first trailer for the HBO Max series “Peacemaker,” which debuted on Saturday as part of the virtual fan event DC Fandome. “Peacemaker,” the spin-off series from the August feature film “The Suicide Squad,” will premiere on the streaming service on Jan. 13. It was created and written by the film’s director, James Gunn. The show follows Cena’s Christopher Smith after the events of “The Suicide Squad,” in which Smith, aka Peacemaker, was nearly killed after betraying his team for what he believed to be the greater...
TV & VIDEOS・1 DAY AGO
Outsider.com

Lucille Ball’s daughter, Lucie Arnaz, is paying her respects to a beloved cast member that once appeared on “The Lucy Show.”. While Ball was known for her hilarious antics on “I Love Lucy” with Desi Arnaz, she had other ventures after the still-loved sitcom. She starred in “The Lucy Show” from 1962 to 1968 alongside other icons like Gale Gordon and Vivian Vance. Amongst those stars was James (Jimmy) Garrett.
CELEBRITIES・27 DAYS AGO
Hello Magazine

Hoda Kotb sadly had to share some upsetting news with her social media followers on Friday when she announced she was mourning the loss of someone special. The Today show host took to Instagram with a photograph and a message which had her fans inundating her with prayers. Hoda revealed...
CELEBRITIES・9 DAYS AGO
People

R&B Singer Emani 22 Dead at 22: She 'Brightened up Any Room She Was in,' Producer J Maine Says

Emani 22, an R&B singer known for songs including "Feelings" and "Close," has died. She was 22. Emani died on Monday following a "tragic accident," her manager tells PEOPLE. "It is with heavy hearts that the family of Emani has confirmed her passing," a statement provided to PEOPLE reads. "They would like to share that although she fought courageously and the medical team went above and beyond doing everything in their power to aid in her recovery, on Monday, October 11th, Emani succumbed to the injuries she sustained after a tragic accident. At this time, Emani's family is asking for privacy to mourn and honor her life and memories."
MUSIC・3 DAYS AGO
Page Six

Alana Thomspon, also known as “Honey Boo Boo,” has finally gone Instagram-official with her boyfriend, Dralin Carswell, after six months of dating. “🎃🎃 spooky season 🎃🎃,” the reality star, 16, captioned a photo of herself and her 20-year-old beau at a pumpkin patch on Monday. The “Mama June: From Not...
CELEBRITIES・19 DAYS AGO
Fox News

She didn’t use her basic instinct. After Jonah Hill politely asked his followers on Instagram not to comment on his body — good or bad — actress Sharon Stone posted a comment, asking, "Can i say you look good cuz u do," with a fire emoji. The comment from Stone’s...
CELEBRITIES・2 DAYS AGO
HelloBeautiful

Jay Z and Kelly Rowland reconnected like old friends at "The Harder They Fall" premiere and Twitter is in their feelings over how pure the moment was!
CELEBRITIES・2 DAYS AGO