Nicklas Backstrom (hip) out for start of Washington Capitals’ camp 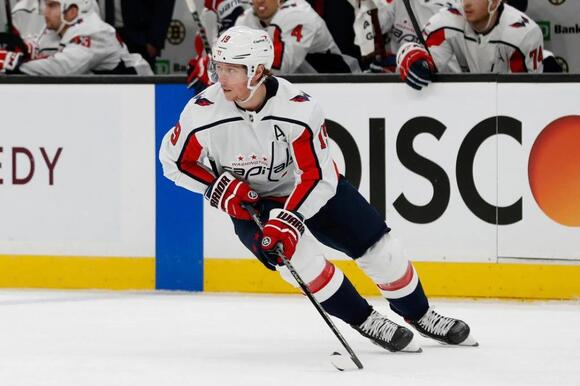 Backstrom, 33, is considered week-to-week as he continues rehab on the left hip, which he also had arthroscopic surgery on in 2015.

Despite the injury, Backstrom missed just one game last season and was on the ice for the Capitals’ first-round playoff loss to the Boston Bruins.

Backstrom finished last season, his 14th in the NHL, with 15 goals and 38 assists in 55 games.

“I think Nick had a great year,” said Washington general manager Brian MacLellan. “He led our team. Unfortunately, he got worn down at the end of the year.”

Over the summer, he turned down an invite from Sweden to play in the 2021 IIHF World Championship due to the injury.

Backstrom, who was taken fourth overall by the Capitals in the 2006 NHL Entry Draft, is entering the second year of a five-year, $46 million deal.

In 1,011 career games, all with Washington, Backstrom has accounted for 258 goals and 722 assists. He helped the Capitals win the 2018 Stanley Cup.

ARLINGTON, Va. -- Alex Ovechkin (lower-body) took part in Tuesday's optional practice for the Capitals, one day before Wednesday's opener against the New York Rangers. Nicklas Backstrom (hip) also skated prior to the practice for the first time since the start of camp. Ovechkin suffered a lower-body injury in Friday's...
NHL・8 DAYS AGO
NBC Sports

The Capitals made a flurry of roster moves on Monday prior to the NHL's 5 p.m. deadline as Nicklas Backstrom was designated as injured non-roster while Connor McMichael and Beck Malenstyn were assigned to the Hershey Bears. The team also announced additional moves and the opening night roster would be...
NHL・9 DAYS AGO
Sportsnet.ca

Washington Capitals star Nicklas Backstrom has been placed on long-term injured reserve as NHL teams finalize their initial 23-man rosters for the season. He will miss a minimum of 10 games. Backstrom did not take the ice during training camp with a lingering hip issue that was a carry-over from...
NHL・9 DAYS AGO
theScore

Washington Capitals center Nicklas Backstrom will begin the 2021-22 season on long-term injured reserve as he continues to recover from an offseason hip injury, the team announced Tuesday. The move means Backstrom will miss at least the first 10 games of the campaign. He's eligible to return on Nov. 6.
NHL・9 DAYS AGO

Many hands were thrown during Monday night’s game between the Philadelphia Flyers and Seattle Kraken. After earning their very first win of their existence on Oct. 14 against the Nashville Predators, the Seattle Kraken lost 2-1 in overtime to the Columbus Blue Jackets two nights later. The Kraken attempted to get back in the win column against the Philadelphia Flyers, head coach Dave Hakstol’s former team, on Monday night.
NHL・2 DAYS AGO
Bring Me The News

Marcus Foligno got into his second fight of the season on Tuesday night and he was not messing around as he went up against Brenden Dillon of the Winnipeg Jets. Tuesday's matchup got physical in the first period as the Jets attempted to get Kirill Kaprizov off his game. With the period winding down, Foligno finally had enough.
SPORTS・1 DAY AGO
hockeyinsiders.net

VIDEO: Brawl Breaks Out Between Kraken And Preds' Fans.

The Seattle Kraken got their first win in franchise history last night as they took down the Nashville Predators 4-3 in Nashville. Crazy eyes Brandon Tanev scored two goals which included the game winner in the third period to put things away. While the Kraken were taking care of things...
NHL・5 DAYS AGO
WPXI Pittsburgh

PITTSBURGH — After Vegas Golden Knights goaltender Robin Lehner accused multiple NHL teams of giving players pain medication without prescription, a former Penguins player also released his own experience on social media. The issue was raised after Lehner issued a controversial Twitter thread over the weekend. He said he wanted...
NHL・15 DAYS AGO

Hall of Fame forward Mike Bossy delivered some heartbreaking news on Tuesday evening, announcing that he will be taking some time off from his broadcasting job at TVA Sports after being diagnosed with lung cancer. The New York Islanders legend informed the public of his diagnosis in a self-penned letter...
HOCKEY・1 DAY AGO
the-rink.com

With the preseason complete, the Kraken got rolling with roster assignments, putting Kole Lind and Max McCormick on waivers. If both clear, they will be assigned to Charlotte. ⚓ Lind was drafted by the Vancouver Canucks in the second round of the 2017 NHL Entry Draft, after playing major junior with the Kelowna Rockets. He was selected from the Canucks at the 2021 NHL Expansion Draft by the Kraken.
NHL・15 DAYS AGO
USA TODAY Sports Media Group

The Washington Capitals are on the road to face the Boston Bruins on Wednesday night from the TD Garden. The Capitals are still looking for their first win of the preseason and haven’t had much luck after falling again to the Devils 4-1 in their last game. As for the Bruins, they will look to bounce back after an overtime loss to the Flyers’ last game and will look for an easy third win of the preseason tonight.
NHL・14 DAYS AGO

Washington Capitals: Breaking down all fan activities for start of season

Are you going to the Washington Capitals game tonight? If you are you should definitely get there early! There are a ton of activities leading up to the drop of the puck to celebrate the return of hockey and a somewhat return to normalcy with an 82 game season and a full capacity Capital One Arena.
NHL・8 DAYS AGO
NJ.com

The New York Rangers face the Washington Capitals in an NHL regular season game at Capital One Arena in Washington, D.C., on Wednesday, October 13, 2021 (10/13/21). Fans can watch the game with Sling. Here’s what you need to know:. What: NHL regular season. Who: Rangers vs. Capitals. When: Wednesday,...
NHL・7 DAYS AGO
prohockeyrumors.com

The Seattle Kraken have lost one of their expansion picks to waivers, as Dennis Cholowski has been claimed by the Washington Capitals according to Elliotte Friedman of Sportsnet. To make room on the roster, the team has loaned Beck Malenstyn back to the AHL. This is exactly the risk that...
NHL・7 DAYS AGO
ESPN

LAS VEGAS -- The Vegas Golden Knights lost two more players when forward Max Pacioretty and captain Mark Stone were injured Thursday against the Los Angeles Kings, adding two key names to the Golden Knights' long list of inactives. Pacioretty is week to week after he broke a foot during...
NHL・4 DAYS AGO

Fake vaccination cards have become an increasing issue with the enforcement of vaccine mandates and widespread misinformation about the efficacy of the COVID-19 vaccinations.
NHL・2 DAYS AGO
CBS 42

(NEXSTAR) – The National Hockey League first began sending its players to the Olympics in Nagano in 1998. And that continued for the next four winter Olympics through Sochi in 2014. “It was a great feeling to be in front of the fans,” said Zemgus Girgensons, a forward for the Buffalo Sabres who competed for […]
NHL・2 DAYS AGO
Sportsnaut

Hockey Hall of Famer Mike Bossy has been diagnosed with lung cancer. Bossy, 64, announced his illness on Tuesday in
HEALTH・1 DAY AGO