DeChambeau-Koepka storyline drives its own prop market at Ryder Cup 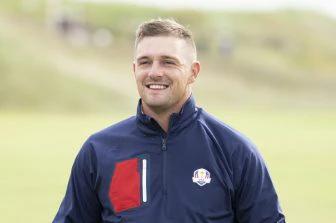 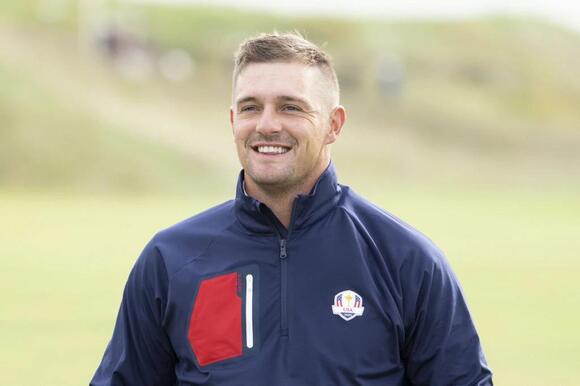 Bryson DeChambeau and Brooks Koepka have tabled their long-running feud for at least this week’s Ryder Cup.

The rivals-turned-teammates have spent countless hours together in meetings, on the course and even at dinner ahead of this week’s competition.

DeChambeau said things were “fine” between the two, and then teased everyone by saying “there may be something fun coming up here moving forward.”

What that “something” could be has created plenty of conjecture.

The PGA Tour has avoided pairing the two together as their two-year-old feud has escalated via social media over the past six months. But could Team USA captain Steve Stricker pair the two bombers together at Whistling Straits this week? 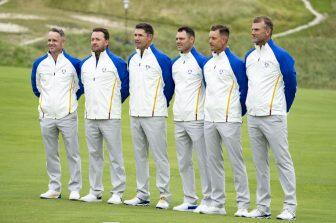 That possibility is being offered as a +800 longshot by MaximBet, compared to -1500 odds that DeChambeau and Koepka are not in the same pairing Friday or Saturday ahead of Sunday singles.

Among the sportsbook’s other prop bets driven by the DeChambeau-Koepka storyline:

Which player will finish with the most wins?
–Brooks Koepka +100
–Bryson DeChambeau -120

Which player will finish with the most points?
–Brooks Koepka +115
–Bryson DeChambeau -140

Will Bryson DeChambeau and Patrick Cantlay be paired together?
–Yes +500
–No -900

The two have traded jabs several times this year over social media, and DeChambeau readily admits he tries to engage fans with the various content he produces for TikTok, Instagram and Twitter. It has made him a very polarizing personality in the golf world, and it remains to be seen if he and Koepka have buried the hatchet for more than just this week. 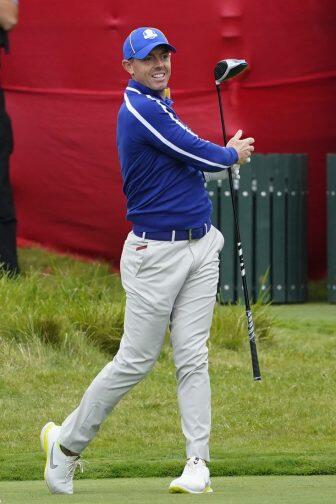 “A lot of this social media stuff has definitely been driven by a lot of external factors, not necessarily us two,” DeChambeau said. “We had some great conversations Tour Championship week when we had dinner, and then this week, as well. I sat down and had dinner with him (Monday) night, and it was fine.

“I think there may be something fun coming up here moving forward, but won’t speak too much more on that.”

And now the public can wager on what that “something” may be.

Bryson DeChambeau vs Brooks Koepka: How and when to watch The Match!

After the 2021 PGA Tour season, the last thing that we expected was to see a match between Bryson DeChambeau and Brooks Koepka. Their feud completely dominated the golf world throughout last season. Once Koepka rolled his eyes in that infamous interview at Kiawah Island, there was no coming back.
GOLF・10 DAYS AGO
thelines.com

Brooks Koepka, who won the 2018 THE CJ CUP @ NINE BRIDGES at Nine Bridges, will look for another victory this year at The Summit Club. He’s listed at +2800 to finish atop the leaderboard this time around. The betting insights in this article reflect betting data from DraftKings as...
GOLF・10 DAYS AGO
Golf.com

7 things to know about Wynn Golf Club, the host course for Brooks Koepka vs. Bryson DeChambeau

Let’s get ready to rumble! Another heavyweight golf bout is on its way to Las Vegas, but this time around, the venue won’t be Shadow Creek. When brawny rivals Brooks Koepka and Bryson DeChambeau go head-to-head the day after Thanksgiving in the fifth edition of The Match, they’ll do so at Wynn Golf Club, behind the casino hotel of the same name. Like Shadow Creek, which hosted the first iteration of The Match, a $9-million extravaganza starring Tiger Woods and Phil Mickelson, the Wynn is an impeccably manicured Tom Fazio design that commands a hefty price tag. But unlike Shadow, it hasn’t been the backdrop for any recent high-profile televised events. If you’re thinking of playing the course — or just watching the event — here are seven fun facts to stuff into your trivia bank.
GOLF・13 DAYS AGO
golfmagic.com

Brooks Koepka and Viktor Hovland may have had very different experiences at the Ryder Cup last month, but they had one thing in common in the first round of the CJ Cup. On the 12th hole at The Summit Club, both players took their drivers out with the intention of driving the green and they both passed the test with flying colours.
GOLF・8 DAYS AGO

Michael Jordan was one of the most fearsome competitors of all time and is widely regarded as one of the greatest basketball players ever. It would be a safe bet to assume that the six-time NBA champion would fear nobody, but there is one man on that list in the form of a British golfer and Arsenal fan, Ian Poulter.
NBA・2 DAYS AGO
golfmagic.com

Richard Mansell hit one of the shots of the year during the second round of the Mallorca Golf Open, on his way to carding the low score of the day. Mansell was eight shots adrift from the overnight leader Jeff Winther at the beginning of Friday, but he got to work early on with two birdies on his opening two holes.
GOLF・1 DAY AGO
golfmagic.com

Padraig Harrington: Parents were in TEARS and Rory McIlroy took on too much

Padraig Harrington has revealed some parents of the European Ryder Cup players were reduced to tears at Whistling Straits. In an exclusive interview with Rick Broadbent from the Times, Harrington has spoken in detail about what he thought of the week. His European side were dismantled 19-9 in one of...
GOLF・17 HOURS AGO
The Independent

Matt Fitzpatrick overcame his Ryder Cup heartbreak in his first event since Europe’s record-breaking defeat as he claimed a three-shot victory at the Andalucia Masters.The Englishman made it two Ryder Cup appearances without a point as Europe were defeated 19-9 at Whistling Straits, losing his singles match from one up with three to play to ensure the United States won by a record margin.But he showed no ill effects after a two-week break, carding a closing bogey-free 69 to finish at six under and hold off the challenge of Swede Sebastian Soderberg and Australia’s Min Woo LeeFitzpatrick started the day...
GOLF・6 DAYS AGO

Dustin Johnson has expressed a strong interest in becoming the US Ryder Cup captain one day and he is confident that he would be a successful leader. The former World No. 1 was the MVP for America at Whistling Straits. Steve Stricker chose him in all five matches and he delivered maximum points, becoming only the second American player to do so since 1979.
GOLF・9 DAYS AGO
Golf Channel

Justin Thomas has already earned more than $44 million in prize money over the course of his seven-year PGA Tour career, so it’s safe to say that his closet at home in South Florida is pretty sizable. It just doesn’t have room for any more Team USA gear. Thomas, who...
GOLF・11 DAYS AGO
golfmagic.com

The Ryder Cup may well and truly be over but there is still news filtering out from the aftermath. Justin Thomas is auctioning off his shoes, a signed headcover and a pin flag signed by the winning United States team. While it was also revealed that the motivational text message...
GOLF・8 DAYS AGO
SkySports

Ian Poulter, Paul Lawrie and Stephen Gallacher are among the golfers to have paid tribute to well-known golf broadcaster and journalist Renton Laidlaw, who died on Tuesday aged 82. The veteran journalist, a former recipient of the Jack Nicklaus Memorial Award for golfing journalism, passed away at Ninewells Hospital in...
GOLF・10 DAYS AGO

LAS VEGAS — Perhaps the best part of this past Ryder Cup, outside of the dominant American team win, was the way they celebrated it as a group afterward. The post-victory press conference was a treasure trove of great moments, none more out-of-the blue than Xander Schauffele puffing on a cigar, grinning from ear to ear and winking at somebody in the room.
GOLF・11 DAYS AGO
chatsports.com

It’s hard to call last season a disappointment for Xander Schauffele. He won an Olympic gold medal. He played a key role for the victorious U.S. Ryder Cup team at Whistling Straits. He notched seven top-5 finishes. However, he also didn’t win an official tournament. “It's an interesting feeling,” Schauffele...
GOLF・10 DAYS AGO
golfmagic.com

The Ryder Cup did not go particularly well for Padraig Harrington and Team Europe at Whistling Straits. They were humbled and lost 19-9 against a merciless United States team who were urged by Tiger Woods to "step on their necks". And while the immediate inquest into the defeat has seemingly...
GOLF・11 DAYS AGO
golf365.com

Rory McIlroy has vowed to reap the positives from his Ryder Cup meltdown as he prepares to return to action at the big-money CJ Cup in Las Vegas this week. McIlroy broke down in tears in a rare show of emotion after winning his singles match against Xander Schauffele in Europe’s ill-fated quest at Whistling Straits in Wisconsin.
GOLF・10 DAYS AGO
Golf Digest

Dustin Johnson put forth an all-time performance during Team USA's historic rout at the Ryder Cup last month. But despite clearly having a lot more great golf in him, he's already fielding questions about being captain someday as the young squad's oldest member. By far. "Yeah, I would love to...
GOLF・9 DAYS AGO
BBC

Rory McIlroy says he was "surprised" by his emotional reaction to his disappointing Ryder Cup performance. The four-time major winner broke down in tears after beating Xander Schauffele in his singles match. The Northern Irishman lost all three of his other matches as the United States regained the cup with...
GOLF・9 DAYS AGO
New York Post

Xander Schauffele’s hangover after Team USA’s Ryder Cup win was his worst in years. “My wife said she hadn’t seen me that bad since college,” said Schauffele, a San Diego State alum, while speaking at The Summit Club Tuesday ahead of the CJ Cup this weekend in Las Vegas. “I’m...
GOLF・8 DAYS AGO
CBS Sports

The greatest gifts have the broadest underbellies. This is more or less the story of Tiger Woods' career -- and life. The temptation that comes when everyone tells you that nobody has ever done it better is nearly impossible to stave off. I'm not talking about the temptation that ultimately...
GOLF・5 DAYS AGO