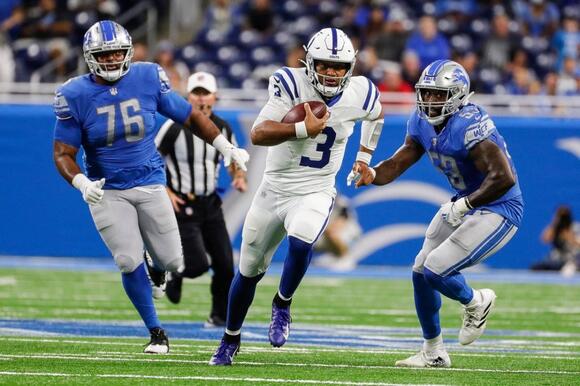 According to multiple reports, Hundley worked ahead of Eason as Wentz missed practice with two sprained ankles. Wentz left the Week 2 loss to the Los Angeles Rams in the fourth quarter and has “significant swelling,” head coach Frank Reich said.

Hundley and Eason are both being prepped with the expectation Wentz will miss the Week 3 game at Tennessee, Reich said.

Wentz wouldn’t count himself out and said he’ll “throw the kitchen sink” at the rehab and treatment process with a goal of facing the Titans.

The Colts are 0-2 with three consecutive road games ahead.

Wentz said he has never played in a game after not practicing the week prior, and Reich indicated the Colts prefer using Friday’s practice as a benchmark for determining if players will be ready for gameday.

Colts Give Up on Jacob Eason, Waive the Ex-UW Quarterback

He had all the size to be the NFL's next Ben Roethlisberger, but Jacob Eason didn't have that other guy's mental acumen, the ability to command the field. He won't be the next Johnny Unitas, Peyton Manning or Andrew Luck either.
NFL・6 DAYS AGO
chatsports.com

The Jacob Eason era, which began with plenty of hope in Indianapolis, might be over. The Colts waived their 2020 fourth-round pick Tuesday and activated quarterback Sam Ehlinger from the injured reserve list. Fans on Twitter reacted to the news. Follow IndyStar trending sports reporter Matthew VanTryon on Twitter @MVanTryon...
NFL・6 DAYS AGO
Yardbarker

A familiar face will soon be returning to the Pacific Northwest to join the Seahawks quarterback room. According to Mike Garafolo of NFL Network, Seattle has been awarded second-year quarterback Jacob Eason off of waivers. A former five-star recruit who threw 102 touchdowns starring at Lake Stevens High School, he was surprisingly cut by the Colts earlier this week.
NFL・5 DAYS AGO
cbs4indy.com

RENTON — A walk down the hallway at the VMAC when Jacob Eason arrived Thursday turned into a stroll down memory lane. Adorning the hallway are large pictures of many of the greatest moments of the Pete Carroll era — Jermaine Kearse’s TD catch to win the 2015 NFC title game, the trophy presentation following the Super Bowl win the year before, Richard Sherman’s tip, Kam Chancellor’s interception against Carolina in the 2015 playoffs and on and on.
NFL・3 DAYS AGO
Sports Illustrated

Check out odds, plays and more for the San Francisco 49ers vs. Indianapolis Colts NFL Week 7 matchup on October 24, 2021.
NFL・2 DAYS AGO
chatsports.com

BALTIMORE -- The Baltimore Ravens weren't able to set an NFL rushing record but all they will remember is how Lamar Jackson carried them with his arm. Rallying from 19 points down in the second half, Jackson led the Ravens to an improbable 31-25 comeback win over the Indianapolis Colts. Jackson's 5-yard touchdown pass to Marquise Brown in overtime lifted Baltimore to its fourth straight win.
NFL・14 DAYS AGO
Pro Football Rumors

Rodrigo Blankenship‘s hip injury played a role in the Colts’ collapse Monday night, and the team is looking into temporary replacements. Michael Badgley and Brett Maher are working out for the Colts on Wednesday, Ian Rapoport of NFL.com tweets. Indianapolis might not stop with just these two for workouts, Rapoport...
NFL・12 DAYS AGO

When it comes to quarterback Carson Wentz, it appears as though the Indianapolis Colts’ fanbase is somewhat divided—some think he’s an average starting NFL stopgap, while others truly believe that he can become the long-term answer at a critical position. What is clear though is that he’s coming off his...
NFL・11 DAYS AGO
Sportsnaut

Check-in here throughout the year for the NFL games today full weekly schedule. Including links to Sportsnaut’s season forecasts for
NFL・5 HOURS AGO
abc17news.com

INDIANAPOLIS (AP) — The Indianapolis Colts have activated quarterback Sam Ehlinger and put receiver Parris Campbell on injured reserve. They also waived Jacob Eason, their No. 2 quarterback for the first two weeks this season. Campbell injured his foot on a 51-yard TD reception in Sunday’s victory over Houston. Ehlinger had been on injured reserve since hurting his knee in the final preseason game. Indy also promoted kicker Michael Badgley from the practice squad to the active roster.
NFL・6 DAYS AGO
On3.com

The Indianapolis Colts are making some changes to their quarterback room this week. Quarterback Sam Ehlinger is expected to make his return to practice this week. The Colts had placed their rookie quarterback on IR back on Sept. 2 Following a knee injury. But in order for Ehlinger to join the main roster, room has to be made. So to make room for the former University of Texas star, the Colts have elected to cut fellow quarterback Jacob Eason.
NFL・6 DAYS AGO

When the Indianapolis Colts drafted Jacob Eason in the fourth round of the 2020 NFL Draft, many thought Chris Ballard got a steal. A former top recruit.
NFL・6 DAYS AGO
nfltraderumors.co

Georgia Football coverage presented by — Jacob Eason has already found a new team after beingwaived by the Indianapolis Colts on Tuesday. Eason made an appearance in one game for the Colts in the Week 2 loss to the Los Angeles Rams. Eason came into the game late to relieve the injured Carson Wentz for a few plays, throwing for 25 yards with an interception.
NFL・5 DAYS AGO

Colts News: Why did the Colts cut Jacob Eason?

Colts Wednesday Notebook: Why Did The Colts Cut Jacob Eason?. Indianapolis had expressed hope in getting Eason back on the practice squad, but the Seahawks took that decision away. The injury-plagued Indianapolis Colts are wondering if Julian Blackmon will be added to the list. Head coach Frank Reich on Wednesday...
NFL・4 DAYS AGO
Stampede Blue

Oct. 20—The Seahawks' shuffling at quarterback since Russell Wilson got hurt continues. Seattle claimed former University of Washington Jacob Eason off waivers from the Indianapolis Colts Wednesday. The 6-foot-6 Eason graduated from Lake Stevens High School then played at the University of Georgia in 2016 and '17. He transferred to...
NFL・5 DAYS AGO
NBC Sports

Colts quarterback Brett Hundley has been named this week’s Community MVP by the NFL Players Association. Hundley and his sister Paris, who was diagnosed with epilepsy as a child, founded The Hundley Foundation in 2019 to provide resources for children living with epilepsy and other disabilities. They hosted a Halloween party in Las Vegas for more than 250 kids and families who live with epilepsy.
NFL・3 DAYS AGO