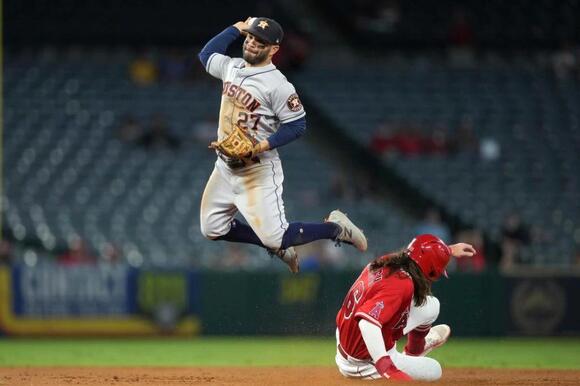 Jose Altuve hit a two-run double in a four-run 12th inning to help the visiting Houston Astros earn a 9-5 win against the Los Angeles Angels on Wednesday night.

The Astros, who have won seven of their past eight games, will attempt to complete a four-game series Thursday. Houston (91-61) trimmed its magic number to clinch the AL West to three.

Chas McCormick began the winning rally with his third hit of the game. He also made two diving catches in right field and threw out Shohei Ohtani at the plate to end the 10th inning.

Houston’s Yordan Alvarez had three hits, including his 32nd home run of the season, and drove in three runs to give him 101 RBIs on the season.

Jack Mayfield hit a three-run double in a five-run seventh inning to help the Angels rally from a 3-0 deficit.

Andrew Wantz blanked the Astros in the 10th and 11th innings. The Angels (72-80) had the bases loaded with no outs in the 10th, then had the winning run at third with one out in the 11th but failed to score each time.

Altuve then doubled down the left field line to plate two more, taking third on the throw. He scored on an Alex Bregman sacrifice fly to make it 9-5.

Luis Rengifo dropped a one-out RBI single into left field, and Kean Wong walked to force in another run and make it 3-2.

Kendall Graveman took over on the mound and gave up the two-out, three-run double to Mayfield as the Angels grabbed a 5-3 lead.

The Astros tied it 5-5 with two runs in the eighth, on an RBI double by Alvarez and a run-scoring single by Yuli Gurriel.

Angels starter Janson Junk gave up three runs in four-plus innings. The right-hander allowed four hits, including two home runs, struck out one and walked one.

Junk walked Altuve to start the game and fell behind Alvarez with one out before serving up a 456-foot home run that made it 2-0.

Junk retired 11 of the next 12 batters before Jason Castro led off the fifth with a home run to make it 3-0.

The Houston Astros shortstop teased signing with New York during a recent appearance on the La Garata podcast. However he didn’t specify if he was talking about the Yankees or Mets. Here’s what was said during the interview, which was conducted in Spanish, according to SNY:. In a separate interview,...
MLB・2 DAYS AGO
Larry Brown Sports

Justin Verlander may not be able to help the Houston Astros in their quest for another World Series title, but the star pitcher had some advice for the team during the first game of the ALCS. Carlos Correa helped the Houston Astros come from behind to beat the Boston Red...
MLB・1 DAY AGO
Sportsnaut

The Red Sox, thanks to J.D. Martinez and Rafael Devers, became the first team in MLB history to hit two grand slams during a single postseason game.
MLB・15 HOURS AGO

Houston Astros | Athletics vs. Astros Highlights - Astros homer four times in the 10-4 win over the A's

Mariners hang on to playoff hopes with win over LA Angels

SEATTLE — The Mariners beat the Los Angeles Angels six to four in front of a sold-out crowd Saturday in their bid to reach the MLB playoffs. Mitch Haniger drove in five runs and his two-out, two-run single in the eighth inning gave Seattle the lead as the Mariners took their playoff hopes to the final day of the regular season.
MLB・14 DAYS AGO
hawaiitelegraph.com

Yordan Alvarez slugged his club-leading 33rd home run but it was a two-run triple by Michael Brantley that helped the Houston Astros secure a 10-4 win over the visiting Oakland Athletics on Saturday. The Astros clinched home-field advantage for their American League Division Series matchup with the Chicago White Sox...
MLB・14 DAYS AGO
Reuters

Mitch Haniger had four hits, including a home run, and five RBIs as the Seattle Mariners kept their postseason hopes alive with a 6-4 victory against the visiting Los Angeles Angels on Saturday night. The Mariners (90-71), who have won 11 of their past 13 games, are tied with Toronto,...
MLB・14 DAYS AGO

Friday is packed with division series playoff games. The Astros added to their series lead and the Red Sox earned their first win of the series in style, while the Giants shutout win over the Dodgers capped the night.
MLB・8 DAYS AGO
Hinton News

The fly ball threatened to stop momentum and allow a starter to settle in, but “stacking pennies” took precedent. Kyle Tucker launched Lance Lynn’s first-pitch cutter into right center field. Two were on and one was out in the second inning, an ideal situation for Houston’s hottest hitter in a scoreless game.
MLB・9 DAYS AGO
USA TODAY

Dodgers manager Dave Roberts said it was an organizational decision to start Corey Knebel in Game 5, instead of Julio Urias against the Giants.
MLB・2 DAYS AGO

ALDS Game 4: How the Astros' series-clinching win played out

CHICAGO — The Astros defeated the White Sox 10-1 in Game 4 at Guaranteed Rate Field to win the American League Division Series in four games and will next play Boston in the AL Championship Series starting Friday at Minute Maid Park. Follow along here each game for breaking news, live updates and analysis from our team of writers.
MLB・5 DAYS AGO
WGN News

Astros rally, then pull away from the White Sox to win Game 2 of the ALDS

HOUSTON – There would be no quiet bats early on or struggles from the starter in this second game of the playoffs for the White Sox. The team was toe-to-toe with the Astros from the majority of the afternoon at Minute Maid Park, which was different from Game 1 where Tony La Russa’s team played from behind the entire game. Yet in the end, it was another decisive victory, for the bad times for the White Sox came in the final third of Game 2.
MLB・8 DAYS AGO
MLive

(Astros lead 2-1) When: Monday, October 11. Where: Guarantee Rate Field (Chicago, Ill.) Stream: FuboTV (7-day free trial), Sling, DirecTV Stream. The White Sox were not about to go quietly in their series with the Astros, especially in front of the home crowd on Sunday. Despite Houston going up 5-1 early in the ball game, the White Sox posted five runs in the bottom half of the third to take a 6-5 lead, thanks to a two-run homer from Yasmani Grandal, and a three-run shot by Leury Garcia. After the Astros scored to tie the game in the next inning, Chicago put up three more runs, to go up 9-6, and added some more insurance later on to stay alive after the 12-6 victory.
MLB・4 DAYS AGO
Bleacher Report

The Chicago White Sox avoided the brooms by discovering their bats. Facing the prospect of a three-game sweep, the White Sox offense woke up, leading the way in a 12-6 win over the Houston Astros on Sunday night. It wasn't looking good for Chicago after the Astros raced out to...
MLB・6 DAYS AGO
Sportsnaut

The 2021 regular season is in the books and the MLB playoffs have finally arrived. The American League Championship Series
NFL・10 HOURS AGO