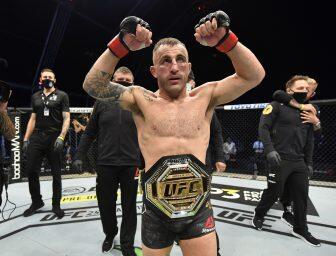 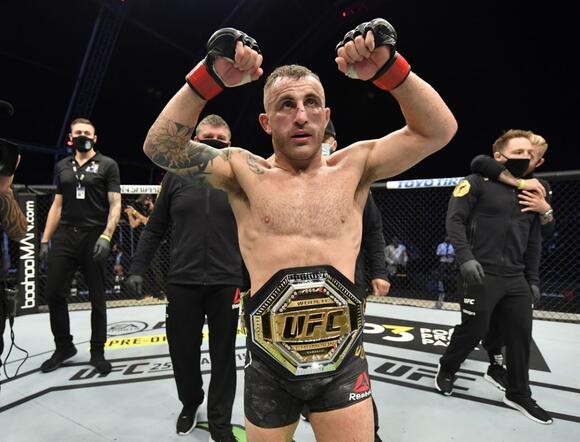 The UFC’s relentless expansion to near-weekly events can leave longtime fans yearning for the day when a mere handful of shows meant every card was deep in world-class talent.

UFC 266 is looking like one of those throwback nights.

Saturday night’s pay-per-view event at T-Mobile Arena in Las Vegas features not just a pair of title fights atop the bill, but one of the longest-anticipated rematches in mixed martial arts history.

The event is topped by a featherweight title fight, as Australia’s Alexander Volkanovski (22-1) puts his belt on the line against Torrance, Calif.’s Brian Ortega (15-1). 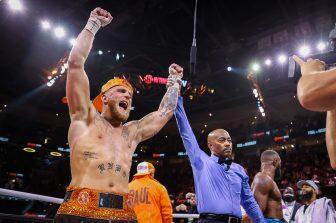 Volkanovski will make his second title defense and puts a 19-fight winning streak on the line as well. Ortega is 7-1 in the UFC, with his only blemish coming in a challenge against then-champ Max Holloway in December 2018.

With both preferring the hard-nosed, high-volume approach, this seems to come down to a battle of wills.

The co-feature bout is a women’s flyweight title matchup. Valentina Shevchenko (21-3), of Kyrgyzstan and Las Vegas, has reached the point in her career where her dominance is the draw, and it’s news if someone makes her sweat. Her opponent in her sixth title defense is Houston’s Lauren Murphy (15-4), a plucky underdog who rides a five-fight winning streak into her big opportunity.

Related: All the UFC news and rumors that are fit to print at MixedMartialArts.com

All of this is preceded by a bout 17 years in the making, as the legendary Nick Diaz (26-9) of Stockton, Calif., returns from a near-seven-year absence to take on former UFC welterweight champion Robbie Lawler (28-15) of Coconut Creek, Fla., in a middleweight fight.

At UFC 47 in 2004, Lawler was hyped as a future star, but the then-unheralded Diaz face-planted him with a memorable second-round knockout. Diaz went on to become one of the game’s biggest stars, while Lawler would wash out of the UFC before returning years later and finally becoming champion in 2014.

After starting his professional career with seven consecutive wins, five by knockout, Evan Holyfield was back in action on Saturday night, battling Charles Stanford on the undercard of the event headlined by Shakur Stevenson vs. Jamel Herring. It took Holyfield, son of legendary boxer Evander Holyfield, slightly more than one...
COMBAT SPORTS・3 DAYS AGO
stillrealtous.com

WWE has released a number of talents so far in 2021, and one of the names who happened to get released back in June was none other than former WWE Cruiserweight Champion Tony Nese. Tony Nese made an appearance during this week’s episode of AEW Dynamite, and on Sunday he...
WWE・2 DAYS AGO
bjpenndotcom

John McCarthy has ripped Daniel Cormier over his comments about Fedor Emelianenko. The former UFC light heavyweight and heavyweight champion, Cormier, recently said on his YouTube channel that he thought had Emelianenko signed with the UFC, he would’ve been average at best. Those comments took many by surprise, including John McCarthy, who proceeded to rip ‘DC’ for for his controversial take.
UFC・1 DAY AGO

The WBA on Wednesday, in a ruling obtained by ESPN, upheld its decision mandating Yordenis Ugas to immediately defend his welterweight title against Eimantas Stanionis. Ugas (27-4, 12 KOs) petitioned the WBA for a special permit to unify his title against two-belt champion Errol Spence Jr., but president Gilberto Mendoza ruled that the sides have 30 days to finalize a deal for an Ugas-Stanionis bout before a purse bid is ordered.
COMBAT SPORTS・6 DAYS AGO
worldboxingnews.net

“The brother of Miguel Cotto made Canelo Alvarez do the chicken dance!”

Caleb Plant has a theory that he can hurt Canelo Alvarez after looking back to the Mexican’s fight with the brother of Miguel Cotto in 2010. Canelo was 20 years old when he took a heavy shot from Jose Miguel Cotto during the first round of their MGM Grand battle on the Floyd Mayweather vs. Shane Mosley bill.
THEATER & DANCE・20 HOURS AGO
HipHopDX.com

Dana White responds to criticism from former UFC champ Junior dos Santos: “Move on to these other promotions and make crazy money”

Dana White has responded after former UFC heavyweight champion Junior dos Santos slammed the promotion for their lack of “professionalism”. Dos Santos (21-9 MMA) was cut by the Ultimate Fighting Championship shortly following his TKO loss to Ciryl Gane at UFC 256. That setback had marked the Brazilians fourth in a row, with all four losses coming by way of technical knockout.
UFC・1 DAY AGO

Dominic Cummings, one of the architects of Brexit, said Nate Diaz could make more money if he left the UFC.
UFC・9 DAYS AGO
chatsports.com

Eddie Hearn has overlooked Anthony Joshua's chances in his heavyweight rematch with Oleksandr Usyk, as the promoter accidentally let slip that he believes the Ukrainian will beat his star fighter next year. The British heavyweight activated his rematch clause over the weekend after losing his WBA, WBO, IBF and IBO...
COMBAT SPORTS・12 DAYS AGO
ESPN

EMOTIONALLY HIGH OFF a huge payday, Shakur Stevenson felt like it was time to get iced out. He had just claimed the WBO interim junior lightweight title after cruising past Jeremiah Nakathila. His 24th birthday was right around the corner. So, Stevenson decided to spoil himself with a gift: a chunky, diamond-encrusted chain with his initials, SS, as a flashy charm.
COMBAT SPORTS・5 DAYS AGO
FOX Sports Radio

WWE Women's champions Becky Lynch and Charlotte Flair were reportedly involved in a "backstage confrontation" after a segment on Friday Night SmackDown.
NFL・2 DAYS AGO

Floyd Mayweather Jr. Applauds NBA Star Kyrie Irving For Not Giving In To Be Vaccinated

Floyd Mayweather is backing NBA star Kyrie Irving’s choice to not get vaccinated. Mayweather posted a video on Thursday applauding Irving for standing his ground on being unvaccinated. Irving, who is the Brooklyn Nets point guard, is one of the few players in the professional basketball league who is unvaccinated. Because Irving plays in New York, as per the state mandate, he must be vaccinated against Covid-19 to participate in practices and games.
NBA・1 DAY AGO
BoxingNews24.com

By Scott Gilfoid: Dillian ‘The Body Snatcher’ Whyte says WBC heavyweight champion Tyson Fury is “slowing down” due to the Kronk Gym style of brawling that he’s now using for his fights, and he will be fighting him next after the WBC mandated the match-up. Whyte (28-2, 19 KOs) denies...
COMBAT SPORTS・2 DAYS AGO
Wrestling World

During the night, All Elite Wrestling (AEW) aired its latest installment of Dynamite, with Lance Archer and Eddie Kingston starring in a contest, which was part of the first round of the AWW World Title Eliminator Tournament. During the contest, however, Lance Archer suffered a very bad blow to the...
WWE・10 HOURS AGO
MMAmania.com

It’s been nearly a year since Mike Tyson stepped into the boxing ring against Roy Jones Jr. in a fight that made a whole lot of money for everyone involved. That didn’t stop Tyson and his then-promotional partner Triller from splitting and getting into a legal fracas that may be delaying “Iron Mike” from scheduling another ‘super exhibition’ bout.
COMBAT SPORTS・23 DAYS AGO
The Independent

Conor McGregor has threatened to kill rival Tony Ferguson in a typically ill-tempered online tirade as he seeks out a first UFC fight in over a year.In the since-deleted tweet the Irishman implied that a clash between the two is inevitable and that the money the fight would make means it should happen sooner rather than later. The 33-year-old also taunted Ferguson over his mental health after rumours that wife Cristina Ferguson had left him following an episode of mania, leading fans to respond negatively.“Me and you are fighting one day mate and I gonna end your life in there...
UFC・3 DAYS AGO
stillrealtous.com

WWE has released quite a few names this year, and you never know when a familiar face might pop up on AEW programming. Over the weekend fans saw former Cruiserweight Champion Tony Nese make an appearance on Dynamite, and Nese also made his in-ring debut with All Elite Wrestling at the AEW Dark tapings at Universal Studios.
WWE・18 HOURS AGO
chatsports.com

TGIFighting: The Hottest Title Picture in the UFC Right Now

Welcome back to TGIFighting, where we talk to top fighters, preview the weekend's combat sports action and make crotchety observations about the combat sports news of the day. Ready? Let's proceed. From now through next January, the UFC has scheduled no fewer than seven title fights. It's natural to take...
UFC・11 DAYS AGO
chatsports.com

UFC Vegas 39 was like a lot of Apex cards of late - many fights fell off at the last minute, leaving just nine bouts left on the card. And the only ranked fighters at all on the card came in the headliner and the flyweight fight between Matteus Nicolau and Tim Elliott.
UFC・14 DAYS AGO