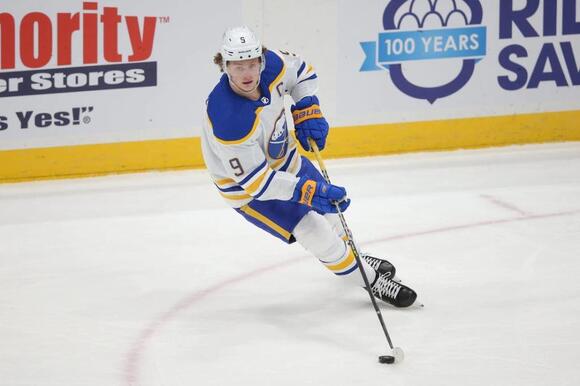 The Buffalo Sabres stripped Jack Eichel of his captaincy after he failed a physical following his arrival to camp on Wednesday.

Eichel, 24, was named captain in 2018 but has been at odds with the team over treatment for a herniated disk in his neck suffered in March.

Following a 12-week period of rest and rehabilitation, the Sabres and Eichel disagree on the type of surgery he should have to repair the issue. The team reportedly wants Eichel to have fusion surgery, while he prefers a cervical disk replacement.

“Unfortunately, yesterday, Jack did not pass his physical,” said Sabres general manager Kevyn Adams. “To this point, Jack is not willing to move forward with the fusion surgery that our doctors are suggesting. So we’re going to continue to work towards solutions.”

Either way, Eichel will start the season on the long-term injured reserve and won’t be with the team at training camp.

“From our perspective and my perspective, I feel the captain is the heartbeat of your team,” Adams said of the decision to remove Eichel as captain. “And we’re in a situation from where we were in the past and where we are now that we felt that we need to do to address that and make that decision here.”

Adams has been exploring trade options for Eichel since the summer, but has yet to find a deal that works.

If the Buffalo Sabres are going to trade Jack Eichel, they’ve now come to realize that they’ll have to agree to a certain condition. For teams interested in possibly acquiring Eichel, they know they’ll be asking for this condition or there’s no trade. In other words, it’s a deal-breaker. That...
NHL・8 DAYS AGO
Pro Hockey Rumors

Jack Eichel has been on the trade block for what seems like forever and has not been on the ice for the Buffalo Sabres this preseason as he continues to await neck surgery. Yet, his market is heating back up. As TSN’s Darren Dreger wrote earlier this week, the Sabres have been pushed by Eichel’s new agent, Pat Brisson, to share medical files with interested parties. The result has been more clarity regarding Eichel’s serious suitors, which could finally lead to a trade.
NHL・7 DAYS AGO
letsgobruins.net

A Big Clue Jack Eichel Being Traded To Bruins?

The Boston Bruins confirmed during the offseason that they're still in win now mode and they might have a blockbuster coming. We all know that Jack Eichel has played his final game in a Buffalo Sabres uniform as he's requested a trade and his captaincy was stripped away. There's been...
NHL・4 DAYS AGO
Yardbarker

After months of tension and drama, star forward Jack Eichel is still at odds with the Buffalo Sabres. Could recent developments finally lead to a trade?. According to TSN's Darren Dreger, other clubs are beginning to show interest in the former second-overall draft pick, who has been sidelined for six months with a herniated disk in his neck.
NHL・10 DAYS AGO

In the professional sports world, we very rarely get unfiltered, honest opinions from athletes. Think back to the most memorable press conferences of athletes and coaches. From Allen Iverson's "practice" tirade, to Jim Mora's repeated question of "playoffs?" to the media, there have been some moments of true honesty and emotion over the years. That being said, those moments are so memorable because they happen so rarely.
NHL・12 DAYS AGO
WGR550

The Sabres name Okposo and Girgensons to be their captains

Granato was looking for leadership last year when he became the head coach. He said, “That’s where Kyle was great last year. The older guys made it easy for me to be an incoming head coach and easier for that whole room
NHL・4 DAYS AGO
Sports Illustrated

Some Movement At Last in the Jack Eichel Saga?

Following months of speculation over Jack Eichel's trade status, there's been a bit of a breakthrough. TSN's Darren Dreger last week reported ongoing talks between the Buffalo Sabres and clubs with an interest in the 24-year-old center recently became more serious. Eichel and the Sabres remain at loggerheads over whether...
NHL・5 DAYS AGO
New York Post

The only way Rangers will pull trigger on Jack Eichel trade

So lo and behold there is renewed urgency to settle this Jack Eichel matter, and it is good to see that Slap Shots missed absolutely nothing during our annual late summer hiatus. And, also pretty much right where we left it, we are being told alternately by well-placed sources that...
NHL・7 DAYS AGO

This Buffalo Sabres Prospect Has Been Super Impressive So Far

The Buffalo Sabres have one preseason game left in 2021 -- this Saturday against the Detroit Red Wings at KeyBank Center. The Sabres final roster for the regular season has not been set yet, and it will be interesting to see how things shake out since Buffalo has a few young prospects that are making a serious push to make the opening night roster.
NHL・10 DAYS AGO
Buffalo News

The Buffalo Sabres continue their preseason action with a 7 p.m. game against the Pittsburgh Penguins in PPG Paints Arena. Get caught up for the game with Mike Harrington's game day notes. To see all of The News' Sabres coverage, visit buffalonews.com/sports/sabres/. Follow the action on the ice through reports...
NHL・11 DAYS AGO
Buffalo News

The Buffalo Sabres continue their preseason action with a 7 p.m. game against the Columbus Blue Jackets in KeyBank Center. Get caught up for the game with Mike Harrington's game day notes. To see all of The News' Sabres coverage, visit buffalonews.com/sports/sabres/. Follow the action on the ice through reports...
NHL・12 DAYS AGO

2021 record: 15-34-7 (8th, East) Players to watch: With cornerstone center Jack Eichel headed out the door, the focus shifts to young centers Dylan Cozens (seventh overall pick in 2019) and Casey Mittelstadt (eighth overall pick in 2017). Can they join defenseman Rasmus Dahlin in the long-term nucleus? Former Blues prospect Tage Thompson is due to finally break out as a power forward. Veteran winger Jeff Skinner if a four-time 30-goal scorer who needs to relocate his game.
NHL・9 DAYS AGO
wblk.com

The Buffalo Sabres kick off their regular season on Thursday, October 14th against the Montreal Canadiens at KeyBank Center. Most fans and analysts are predicting the Sabres to be one of the worst teams in the NHL, once again, and the situation with Sabres now former captain, Jack Eichel has not resolved itself.
NHL・13 DAYS AGO
The Hockey Writers

Calgary Flames fans are upset. There is no getting around that. Many wanted and expected change this offseason, and very little happened. However, that apparently wasn’t for lack of trying. Appearing on The Jeff Marek Show on Monday, Elliotte Friedman spoke on Jack Eichel and his situation with the Buffalo...
NHL・11 DAYS AGO
chatsports.com

The Top 25 Under 25 is a collaboration by members of the Die By The Blade community. It was a combination of six staff writers and over 485 fans that ranked players under the age of 25 as of August 10, 2021. Each participant used their own metric of current ability and production to rank each player.
NHL・12 DAYS AGO

NHL fans (almost everyone) keeping an eye on the Jack Eichel situation have probably grown frustrated with the fact there’s not been much movement on a potential trade in recent weeks. The two sides (Eichel and the Sabres) seemed steadfast in how they want to approach his injury situation and with every day that passes and with his neck in rougher shape the longer he leaves it unattended, it’s becoming clear that surgery, of some kind, needs to get completed.
NHL・10 DAYS AGO
Derrick

All eyes on Eichel and ongoing stalemate with Sabres

BUFFALO, N.Y. (AP) — Jack Eichel has switched agents, been stripped of his captaincy and likely played his final game for the Buffalo Sabres. Eichel's future, however, remains in limbo due to a stalemate over how to treat a herniated disk that has sidelined him since March.
NHL・8 DAYS AGO
Sportsnet.ca

Dr. Ali Rendely, physical medicine & rehabilitation physician at the University Health Network’s Toronto Rehabilitation Institute, weighs in on Jack Eichel's injury dilemma in Buffalo and the differentiating views between Eichel and the Sabres organization, why the Sabres may be hesitant to move forward with an artificial disk replacement, the other options potentially available for treating Eichel's injury, the various timelines to return, and the medical and ethical concerns involved with each.
NHL・12 DAYS AGO