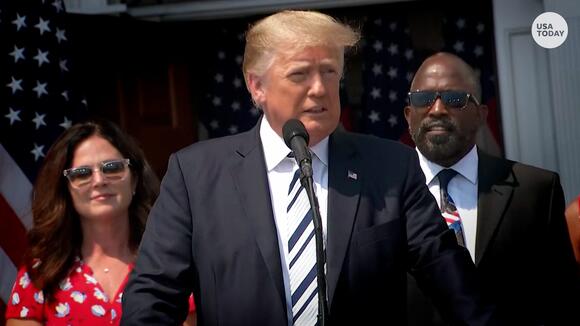 WASHINGTON – Donald Trump has renewed his feud with fellow former President George Bush , this time over Bush's support for anti-Trump congresswoman Liz Cheney – another front in the deeply personal battle over control of the Republican Party.

Trump, who is backing a Republican opponent of Cheney in Wyoming's GOP primary next year, attacked Bush over military policy after news broke that Bush is sponsoring an Oct. 18 campaign fundraiser for Cheney in Dallas.

"Bush is the one who got us into the quicksand of the Middle East," and "the Middle East was left in worse shape after 21 years than it was when he started his stupidity," Trump said in a statement late Wednesday.

The first sentence of the statement condemned Bush's support of the "warmongering and very low polling" Cheney.

It's the latest in the political war between Trump and members of the Republican establishment as he seeks to maintain his control of the party and perhaps mount another presidential campaign in 2024. Trump has also shunned the company of former presidents as he seeks his own path to recapturing political power.

Other Republicans, including Bush, Cheney, and Senate GOP leader Mitch McConnell , have criticized Trump for making false claims of voter fraud regarding his 2020 loss to President Joe Biden; they said his accusations incited the violence at the U.S. Capitol on Jan. 6.

More: 'Look to the skies and remember': Former President Bush reminds Americans of unity after 9/11

Bush, who made Dick Cheney his vice president and who has long supported his daughter Liz Cheney's political career, has also expressed opposition to the negative tone Trump has to public life.

During a ceremony to mark the 20th anniversary of the 9/11 terrorist attacks, Bush appeared to refer to Trump by saying that "so much of our politics has become a naked appeal to anger, fear and resentment."

The Texas-based former president in particular denounced the Jan. 6 insurrection by Trump supporters at the U.S. Capitol, as did other Republicans – including Liz Cheney, one of 10 House Republicans who voted to impeach then-President Trump over the incident.

Trump is trying to defeat those 10 House Republicans in next year's election, and has endorsed Wyoming attorney Harriet Hageman in the state's Republican primary to be held in August. (Trump has already claimed one victory in his campaign; U.S. Rep. Anthony Gonzalez of Ohio, another Republican who voted to impeach Trump, has announced he will not seek re-election next year.)

Cheney meanwhile has not backed down from her criticism of Trump, and repeatedly said the Republican Party should move past its divisive ex-president.

After Trump's endorsement of her opponent, Cheney said too many Republicans have abandoned their principles "out of fear and in favor of loyalty to a former president who deliberately misled the American people about the 2020 election, provoked an attack on the U.S. Capitol, and failed to perform his duties as president as the violence ensued.”

Cheney is expected to echo these comments on the campaign trail, including the Bush-sponsored fundraiser.

Trump and the Bush family, pillars of the Republican establishment for decades, have been fighting for years, especially since Trump's attacks on former Florida Gov. Jeb Bush during the 2016 elections.

I did not vote for GW, I am liberal, but he never disrespected the office of the president, never spewed hate against anyone who disagreed with him, he respected his wife & his daughters. He respected America and his people. I have respect for GW Bush and I stand with Liz Cheney.

lf the Republican party let someone like Trump divide the party they need to be shamed. The GOP used to be a very proud and respectable host of wonderful men working for the good of the people and our country. They need to pull themselves together and have some respect for themselves, their families, the people and the United States Of America.After Trump is gone their political careers will be damaged beyond repair if they don't grow some balls and backbone and tell Trump they don't need or want him dividing or lieing to the people and to tell the truth that the 2020 election was not stolen. This country will heal as soon as they lock Trump and his cronies up!

George W. Bush was a great man, a great President and is an awesome family man. sad little trump wished he could be GWB.

The Republican congressman suggested that the GOP House leader is only against "truth tellers."
CONGRESS & COURTS・1 DAY AGO
Newsweek

(CNN) Republican Rep. Liz Cheney blasted former President Donald Trump's ally Steve Bannon for refusing to cooperate with the House committee investigating the January 6 riot, saying that his claim of executive privilege is not only invalid, but suggests Trump was "personally involved" in the planning and execution of the events that day.
POTUS・3 DAYS AGO

The former president and other prominent figures paid their respects to the late secretary of state.
POTUS・5 DAYS AGO
Iola Register

Rep. Liz Cheney has long been one of the most conservative members of Congress, but her vote to impeach President Trump for his actions leading to the Jan. 6 riots at the U.S. Capitol have many of her fellow Republicans angry. Which begs the question: should Cheney follow her Constitutional oath while in Washington, or should she follow the wishes of her constituents.
CONGRESS & COURTS・9 DAYS AGO
Newsweek

George Clooney shared his cutting take on the former president as he discussed the challenges the Biden administration has faced.
NEW YORK CITY, NY・13 DAYS AGO

Liz Cheney, 9 other House Republicans voted to impeach Trump: Who do they face in 2022 midterms?

It’s time to forget about trying to shame Republicans into pursuing accountability for the elite perpetrators involved in Donald Trump’s effort to overthrow U.S. democracy. The ugly truth of the matter is that the great majority of them have made their decision on this matter already. And they aren’t going...
CONGRESS & COURTS・3 DAYS AGO
People

Divisive Georgia lawmaker Marjorie Taylor Greene is again raising eyebrows for her behavior after getting into a verbal sparring match with fellow Republican Liz Cheney on the floor of the House of Representatives on Thursday. CNN and The Hill report that the confrontation occurred during the vote to hold Trump...
CONGRESS & COURTS・1 DAY AGO

(CNN) — The House select committee investigating the US Capitol insurrection is planning for former Justice Department official Jeffrey Clark to testify -- teeing him up to be the first Trump administration official to comply with a subpoena for an interview with the panel, Rep. Jamie Raskin, a Maryland Democrat who serves on the committee, confirmed to CNN.
CONGRESS & COURTS・1 DAY AGO
WashingtonExaminer

Former President Donald Trump's new social media platform, TRUTH Social, has been given 30 days to comply with the software's terms of license before its access is terminated. If it fails to comply, the platform may face legal action or have to rebuild from scratch.
POTUS・1 DAY AGO
nickiswift.com

Pink, born Alecia Beth Moore, is known for saying what's on her mind and doesn't care who it offends. For instance, in 2006 Pink wrote a song called "Dear Mr. President," painting a very unflattering picture about the 43rd president of the United States, George W. Bush. "I hope the president is proud of the fact that we live in a country where we can do things like that, where we can have dissent, talk, communicate and share our opinions," Pink said in a 2006 MTV interview.
CELEBRITIES・2 DAYS AGO
USA TODAY

Condoleezza Rice says that while Jan. 6 Capitol riot was 'wrong,' it's time to move on

Former Secretary of State Condoleezza Rice says the Jan. 6 Capitol attack was "wrong," but she adds it's time for lawmakers to move on.
PROTESTS・2 DAYS AGO

The founder of Mastodon said it appears Truth Social is "absolutely is based on" his open-source social networking platform.
POTUS・2 DAYS AGO
Watauga Democrat

CNN's Jim Acosta confronts Georgia Republican Rep. Marjorie Taylor Greene about why she voted against the criminal contempt resolution against former Trump adviser Steve Bannon. Trusted local news has never been more important, but providing the information you need, information that can change sometimes minute-by-minute, requires a partnership with you,...
CONGRESS & COURTS・17 HOURS AGO
Newsweek

The St. Louis Post-Dispatch editorial board said the "shameful roster" is "once again running interference for a lawless ex-president."
PRESIDENTIAL ELECTION・17 HOURS AGO
Slate

I Was Wrong About Joe Manchin

Back in winter 2021, the media-industrial complex evaluating conservative Democratic West Virginia Sen. Joe Manchin was devoted to predicting the role he would play in the Biden administration. It was still a time when we weren’t sure what the most conservative Democrat in the caucus—the last major Dem standing in his deep-red state, one who’d voted with Republicans about 50 percent of the time during the Trump years—would do now that his party was in power. Longtime D.C. watchers, West Virginia experts, climate scientists, and Beltway journalists put forth theory after theory after theory. Some thought he’d be Democrat in name only and insisted he would halt the leftward progression of the party. Others predicted that he could maybe be good for the Dems, depending, or was perhaps even a political magician. I myself penned a profile of the senator whose headline—“Joe Manchin Is Not a Fossil”—could also be understood as its thesis statement. Manchin was indeed a conservative with staunch fossil fuel industry ties, I argued, but he wasn’t stuck. This was particularly true when it came to climate change, I thought, because he kept the welfare of West Virginians in mind, as demonstrated by his frequent town halls and engagement with his constituents. They are, after all, uniquely vulnerable to climate effects.
CONGRESS & COURTS・1 DAY AGO