By Paul Bedard
WashingtonExaminer
30 days ago 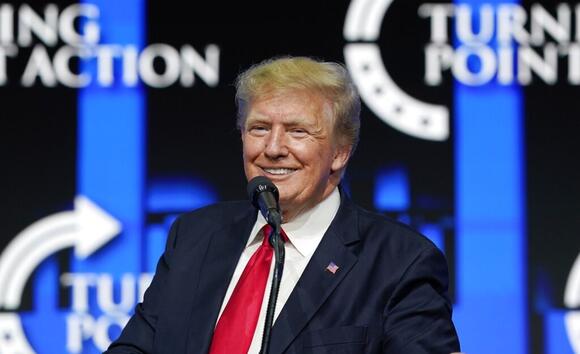 Just 247 days since President Joe Biden took the keys to the Oval Office, a majority of people appear to want him evicted and former President Donald Trump back.

In a stunning turnaround, likely voters today said that given a second chance at Election Day, they’d pick Trump over either Biden or Vice President Kamala Harris. And by a country mile.

The latest Rasmussen Reports survey set for release this morning said that in a Trump-Biden election, Trump would win 51%-41%. Independent voters would overwhelmingly choose the Republican, by 20 points, over the incumbent.

One-fifth of Democrats would also vote for Trump.

The survey is the latest of dozens that have shown Biden sinking like a stone. Many have turned south since the disastrous withdrawal of U.S. forces and diplomats from Afghanistan and the surge of illegal immigrants over the U.S.-Mexico border.

Others have shown that people are growing worried about Biden’s competence and ability to stay in office long enough to run for reelection.

At the same time, voters have been slow to warm to another Trump bid. But that appears to be over.

Rasmussen found that more likely voters than not want Trump to run again. By a 48%-44% margin, they told the pollster that running in 2024 is a good idea.

Trump, set to host a Georgia rally this weekend, has been hinting at another run, and his top advisers have suggested that a 2024 run is a lock.

The poll does not indicate why voters have warmed to Trump again. But others, notably one from McLaughlin & Associates, have shown that voters want Trump’s leadership style back.

For example, when asked about Trump’s “aggressive, controversial” style, voters now think that it “wasn’t so bad” by a 52%-44% margin.

And by a 56%-40% margin, voters told McLaughlin, “I’m coming to appreciate Trump more, and I’m thinking we need a bit more of Trump’s toughness right now.”

Some folks cannot handle the truth of the election. how many times does Trump needs to lose the election it a waste of time and money. enough is enough it over . Trump is done there's coming back we really don't need a repeat of history. America is not a Dictatorship country and we don't need or want Hitler or a MUSSOLINI all in one playbook.

The election process needs to be straightened out before 2024 otherwise it will be a repeat of 2020. Mail-in ballots, rigged voting machines etc. It worked then, it'll be used again.

The White House defended President Joe Biden's knowledge of the situation at the southwestern border during Friday's press briefing, which followed a town hall meeting in which he appeared to acknowledge he was due for another visit.
PRESIDENTIAL ELECTION・22 HOURS AGO
WashingtonExaminer

President Joe Biden made a number of false or misleading claims at a town hall event in Baltimore on Thursday as he attempted to sell his party's spending legislation.
BALTIMORE, MD・20 HOURS AGO
WashingtonExaminer

Sen. Susan Collins on Friday listed a handful of Republicans she would support over former President Donald Trump for the party’s 2024 presidential nomination. But she stopped short of saying she wouldn’t support Trump if he were the party’s nominee. “We have many Republicans that I think would be great...
PRESIDENTIAL ELECTION・23 HOURS AGO

Senate Democrats confirmed someone who is arguably President Joe Biden’s worst nominee. You can thank former President Donald Trump for it. Catherine Lhamon, Biden’s nominee for the Department of Education’s Office for Civil Rights, was confirmed by a 51-50 vote, with every Democratic senator voting to confirm her and Vice President Kamala Harris breaking the tie.
PRESIDENTIAL ELECTION・22 HOURS AGO
Fox News

White House press secretary Jen Psaki said President Biden's approval ratings are so low because people are "tired of fighting" the coronavirus pandemic, which Biden promised to "shut down" during the 2020 campaign. A reporter asked Psaki during the White House's Friday press conference why the president's approval ratings have...
PRESIDENTIAL ELECTION・20 HOURS AGO
Birmingham Star

Washington [US], October 22 (ANI/Sputnik): US Republican Representative Marjorie Taylor Greene on Friday introduced articles of impeachment against President Joe Biden to the House of Representatives for allegedly abusing his power to aid his son Hunter Biden. "I have introduced House Res. 57. These are articles of impeachment on President...
CONGRESS & COURTS・22 HOURS AGO
Newsweek

WASHINGTON – Ken Paxton, the Texas attorney general who as chair of “Lawyers for Trump” tried to overturn Joe Biden’s election in court, said Thursday that he not only still believes Trump won but that Biden’s presidency amounts to an “overthrow.”. He made the comment in El Paso, during a...
TEXAS STATE・1 DAY AGO
Fox News

News broke this week about the desperate attempts Democrats are making to try to eke out a victory for Terry McAuliffe, the Democratic candidate for governor of Virginia. Vice President Kamala Harris taped a video that reportedly is being shown for the next few Sundays in about 300 churches across the state.
PRESIDENTIAL ELECTION・22 HOURS AGO
Walton Tribune

Graham: Y'all Biden folks proud yet?

Immediately after President Joe Biden took office, he went about the business of turning back the clock on every policy his predecessor had put in place. From canceling the Keystone Pipeline to allowing men to participate in women’s sports to whatever else you can think of, the new president went about dismantling the previous administration’s version of our country with reckless abandon.
MONROE, GA・16 HOURS AGO
Business Insider

Republican voters show strong support for Trump as a potential presidential candidate in the 2024 election.
PRESIDENTIAL ELECTION・3 HOURS AGO

Jesse Watters revealed the purpose of Biden's town hall on CNN Friday on "Tucker Carlson Tonight," saying it was to make Americans "aware" of who is really in charge of the United States. JESSE WATTERS: Not many people were watching Joe Biden’s town hall last night. The ratings were absolutely...
PRESIDENTIAL ELECTION・16 HOURS AGO
Washington Examiner

Sitting a few feet from President Joe Biden during his speech to commemorate the Martin Luther King Jr. Memorial's 10th anniversary, Vice President Kamala Harris was well-positioned to issue a quick correction when the president needed it. Touting the size of the American Rescue Plan, a stimulus package passed in...
POTUS・1 DAY AGO
floridapolitics.com

With Trump, The numbers are different. If former President Donald Trump doesn’t run again in 2024, Gov. Ron DeSantis is the favorite. That’s one read of a poll dropped Friday. That 24% puts DeSantis ahead of Donald Trump Jr., who was preferred by 18% of those polled. Former Vice President...
PRESIDENTIAL ELECTION・1 DAY AGO
Fox News

Biden has lost more approval at start of term than any other president since World War II, poll finds

Polling shows that President Joe Biden has suffered a larger approval rating drop at the start of his term than any president since World War II. New polling from Gallup shows that Biden’s approval rating dropped from 56% in Q1 to 44.7% in Q3 which represents an 11.3% drop that has not been experienced by any president since World War II.
PRESIDENTIAL ELECTION・21 HOURS AGO

They called it the “command center,” a set of rooms and suites in the posh Willard hotel a block from the White House where some of President Donald Trump’s most loyal lieutenants were working day and night with one goal in mind: overturning the results of the 2020 election. The...
PRESIDENTIAL ELECTION・5 HOURS AGO
Business Insider

A member of the White House press corps called for President Biden to take more questions, as the White House claimed "he takes questions all the time." White House reporter Brian Karem, who became known during the Trump administration for his aggressive style when asking questions, asked to have the same opportunity with Biden.
PRESIDENTIAL ELECTION・1 DAY AGO
WOOD TV8

The White House said Friday that President Joe Biden would speak in the coming weeks about moving to “fundamentally alter" the filibuster or even eliminate the legislative roadblock that empowers the Senate minority as he aims to pass sweeping voting laws and secure the nation's credit.
PRESIDENTIAL ELECTION・21 HOURS AGO