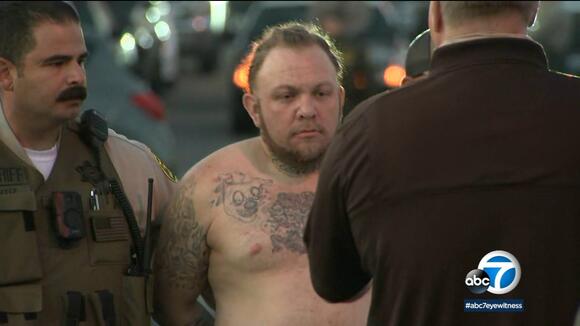 A man and his father were arrested early Thursday morning at a home in East Los Angeles in connection with three separate murders that date back as far as 2014, authorities said. A Los Angeles County Sheriff's Department SWAT team descended on a residence about 4:30 a.m. and took Anthony Velasquez, 31, into custody. His father, 51-year-old Manuel Velasquez, was arrested as a suspected accessory to the crimes. News video from the scene showed deputies placing a shirtless Anthony Velasquez into a patrol vehicle after he was apprehended. He was booked on suspicion of murder and was being held on $2 million bail, authorities said. Manuel Velasquez was in the process of being booked and charged. The arrests came after an $80,000 reward was offered in the case and investigators received multiple tips. The deceased victims were Jesse Avalos, 34, Eduardo Robles, 38, and Amanda "Nikki" Lopez, 27. Avalos was found shot to death on Feb. 11, 2014, at about 3:25 a.m. in the 4800 block of East Telegraph Road, sheriff's Capt. Joe Mendoza said at an August news conference. 'They will kill again': $80K reward to help catch suspects linked to 3 East LA murders

Two dangerous suspects are wanted for the murders of three innocent people in East L.A. between 2014 and 2018. Detectives say the "cold blooded" men are armed and extremely dangerous.

About four hours before he was killed, Avalos had received a call from an acquaintance asking him to go to the location to jump-start a vehicle, and he went there to help, Mendoza said. Avalos was found shot to death while seated in the driver's seat of his SUV. Two suspects were seen leaving the area. Robles was fatally shot on July 6, 2015, at about 7:30 p.m. after he got into a fight with a suspect in the driveway of a residence in the 4300 block of Eagle Street, according to investigators. About 15 to 20 people were at the location at the time, but none provided information leading to the arrest of the suspect. Lopez was fatally shot on April 22, 2018, at about 2:40 a.m., as she slept in a tent near a homeless encampment in the 200 block of Fetterly Avenue. The scene was located in front of the East Los Angeles field office of Los Angeles County Supervisor Hilda Solis. Security video showed the gunman, who wore a mask, exiting a light-colored Chrysler PT Cruiser and firing into the tent, authorities said. The suspect had gone to the encampment looking for Lopez. After the shooting, the gunman ran to the PT Cruiser, which was driven by another man, and it sped off. However, once he was inside the vehicle, the gunman took off his mask, and witnesses saw his face, Mendoza said. Composite drawings were later circulated of the two men, as was security video from the crime scene. According to Mendoza, ballistics evidence showed that the same gun was used in the first two killings. Investigators believe the driver accompanied the gunman in the second and third killings. Homicide detectives said Anthony Velasquez knew each of the victims in some capacity. "It's a big milestone," sheriff's Lt. Hugo Reynaga told ABC7 on Thursday, referring to the arrests. "I don't know at this point, but we may be able to tie these two to other local murders, also cold cases." "In addition, we're just happy to provide the families of these three victims some kind of assurance that justice is going to be served," the lieutenant said. Maria Orozco, Avalos' sister, said she and her family thought they would never receive the call from detectives that his killers were caught. "It meant relief and I thought of my brother, that's he's somewhere in heaven right now celebrating and that he's happy that justice was made and that they will not hurt anyone anymore," she said. Anyone with information about the killings or the suspects is urged to contact the sheriff's Homicide Bureau at (323) 890-5500. City News Service contributed to this report.

How sad a father teaching his son to be a criminal just like him! What kind of person parent does that? May these both demonic criminals get 💀 Death penalty being isolated nor able to

glad the police caught these two pieces of garbage. What would our society be like if we allowed The DemocRats and AntiFa/BLM to "Defund the Police" and "Dismantle the Prison Industrial Complex."

Glad these were removed from the streets. But thanks to George Gascon, they might not get what they deserve. Released early all crime enhancements removed. Gascon believes victims have no rights.

Gunman in custody after shootout with deputies in standoff at Palmdale home, authorities say

An armed man exchanged gunfire with Los Angeles County sheriff's deputies on Saturday during a standoff at a home in Palmdale, authorities said.
PALMDALE, CA・19 HOURS AGO
ABC7

An investigation is underway after Azusa police opened fire on a suspect, who then crashed into a drainage canal Friday evening.
AZUSA, CA・2 DAYS AGO

A woman was killed and seven people were injured when a speeding SUV crashed into a pop-up Halloween store near the Van Nuys Airport Sunday night, officials say.
LOS ANGELES, CA・8 HOURS AGO
ABC7

A standoff involving sheriff's deputies and an armed person in a recreational vehicle prompted the hourslong closure of Pacific Coast Highway.
MALIBU, CA・1 DAY AGO
ABC7

"He wanted to do so much in life, but that was cut short," said Diego Ortega-Reza's brother. "So I'm just here speaking, hoping that this gets out to the public, someone knows something and speaks up."
LOS ANGELES COUNTY, CA・3 DAYS AGO
ABC7

The incident happened in May. One man was killed and a second was injured after they were shot while driving through Fullerton, sending their car crashing into a house.
FULLERTON, CA・2 DAYS AGO

18-year-old shot and killed after fight breaks out during Halloween party in Ontario, police say

An 18-year-old was shot and killed after a fight broke out at a Halloween party in Ontario. Police say the fight broke when a group of people showed up uninvited.
ONTARIO, CA・1 DAY AGO
ABC7

Burglar caught on camera inside Costa Mesa home, taking over $4,000 in property

Police are searching for a suspect who was seen on camera stealing property from inside a Costa Mesa home.
COSTA MESA, CA・3 DAYS AGO
ABC7

A Marine vet took matters into his own hands when he disarmed a robber at a gas station in Arizona and even helped detain him until deputies got to the scene.
ARIZONA STATE・3 DAYS AGO
ABC7

A person was shot in South Los Angeles and then drove several blocks before being involved in a three-car crash at an intersection, where the wounded individual died, authorities said.
LOS ANGELES, CA・4 DAYS AGO

Aloe Blacc is among the artists scheduled to perform at the Roses from the Concrete concert on Saturday in honor of the man shot and killed by Anaheim Police last month.
ANAHEIM, CA・2 DAYS AGO
ABC7

A hit-and-run suspect was barricaded in a Huntington Park home Wednesday night after striking a bicyclist in the street, witnesses and officials say.
HUNTINGTON PARK, CA・4 DAYS AGO
ABC7

Dramatic video shows a dog breeder exchanging gunfire at her Florida home with three teens who stole a pair of micro bullies worth $4,000 each.
FLORIDA STATE・4 DAYS AGO
ABC7

One crew member died and another was hospitalized after an incident involving a prop firearm on the set of an Alec Baldwin Western being filmed in New Mexico.
ACCIDENTS・3 DAYS AGO

Wildfires don't just happen in the wild. They can happen in the middle of cities, too. And they are terrifying. Take a look back at the firestorm that tore through the East Bay Hills, streaming now on the ABC7 Los Angeles app.
ACCIDENTS・2 DAYS AGO
ABC7

18-year-old Daina Monroe was shot and killed while sitting in a car outside her mother's home in Inglewood.
INGLEWOOD, CA・3 DAYS AGO
ABC7

Actor Alec Baldwin has been identified as the person who fired a prop firearm that killed a crew member and left director Joel Souza hospitalized in an incident on the set of a Western being filmed in New Mexico.
PUBLIC SAFETY・3 DAYS AGO