By Ayomikun Adekaiyero
Insider
23 days ago 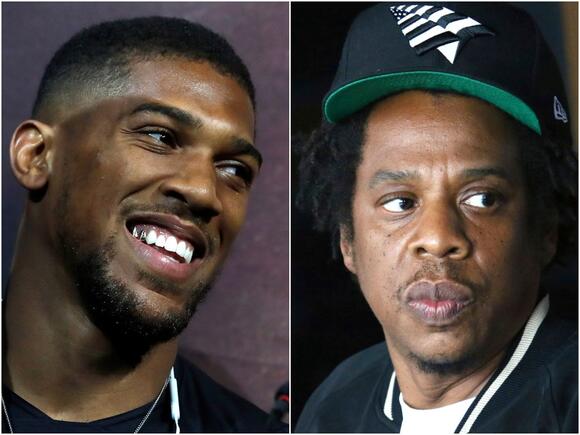 Anthony Joshua recalled a moment where he thought Grammy award-winning rapper Jay-Z was going to "bust" his head at a movie premiere.

The heavyweight champion appeared in a series of videos for William Hill as he prepares for his next fight against Ukrainian boxer Oleksandr Usyk on September 25.

The Daily Mail reported that Joshua told the gambling company about a premiere where he met Jay-Z, whose real name is Shawn Carter, for the first time.

"'Jay-Z was cool. I was at a Will Smith premiere once, years ago," the boxer began. " It was one of those big staircases and I was in the top left. And I saw Jay-Z walk in..."

He continued: "And in my head, I was like: 'Yo, there's Jay-Z.' Know what I mean? Ready to jump down the balcony. But I thought: 'Play it cool.' So I thought: 'What way is he gonna come up these stairs?' Because if I stand on the left and he goes on the right, there's too many people, it's a premiere. Thank God I stood at the right side. As he come up, I was kind of like [grabs his wrist]: 'Jay, do you mind if I get a picture?' And he kind of looked at my hand, yeah, like: 'Boy, I will bust your head if you don't get off my hand.'"

He added: "But it was just one of those things where I just gave the guy the camera, and in that picture - I think it's one of the first pictures on my Instagram - Jay-Z has just got a plain face. And there's me with a big smile."

The picture was posted in October 2013 and since then, Joshua has posted several photos of himself posing with other celebrities including Cara Delevigne, Dwayne Johnson, Idris Elba, and Dame Judy Dench.

Lot of rich people suffer from paranoia. They always thinking someone is out to get them for their money.

Gayy Z is Demonic and Satanic..Look up Spirit Cooking and his name

jay z would have gotten knocked out if he swung

Beyoncé and Jay-Z made a rare public appearance together at the premiere of The Harder They Fall at BFI’s London Film Festival. The singer posted pictures with her rapper husband in the back of a car on Instagram, along with shots from the red carpet at the event. The pair...
MOVIES・9 DAYS AGO
rolling out

The Carters took a trip across the Atlantic this week to the United Kingdom to support the upcoming film The Harder They Fall at the BFI London Film Festival. Jay-Z is one of the executive producers along with James Lassiter of the Black western which will stream on Netflix and will star Idris Elba, Zazie Beetz, Jonathan Majors, Regina King, LaKeith Stanfield and Delroy Lindo. Hov spoke to PA Media on Wednesday, Oct. 6, 2021, about the importance of having such a strong Black ensemble tell stories that depict the Western time frame.
MOVIES・9 DAYS AGO
HelloBeautiful

Jay Z and Kelly Rowland reconnected like old friends at "The Harder They Fall" premiere and Twitter is in their feelings over how pure the moment was!
CELEBRITIES・2 DAYS AGO
Complex

ComplexCon returns to Long Beach Nov. 6 - 7 with hosts J. Balvin and Kristen Noel Crawley, performances by A$AP Rocky and Turnstile, and more shopping and drops. Jay-Z and Beyoncé made a surprise appearance at the London Film Festival to support the upcoming Netflix film The Harder They Fall, starring Idris Elba, Regina King, Zazie Beetz, and tons more. While they were there, Hov gave a hilarious answer to one reporter’s question.
PETS・9 DAYS AGO

Venue: T-Mobile Arena, Las Vegas. Date: Saturday, 9 October (approx 04:00 BST on Sunday, 10 October). Coverage: Live text updates on BBC Sport website. British world heavyweight champion Tyson Fury says his achievements in the sport have already made him a boxing "great" and that his love of fighting is what motivates him to continue.
COMBAT SPORTS・11 DAYS AGO
New Haven Register

Where have all the Black cowboys gone? They are raging in the heart and mind of debut filmmaker Jeymes Samuel’s “The Harder They Fall,” an advantageous and stylistic western that could become one of the most popular flicks on Netflix and a populist selection in the major Oscar categories, which could include rapper Jay-Z.
MOVIES・10 DAYS AGO
easyreadernews.com

What now for Anthony Joshua?

There was a point a couple of years ago where Anthony Joshua was dubbed as one of the greatest British boxers of all time. The heavyweight was unbeaten and on top of the world, delivering knockouts with varying degrees of speed but scary levels of devastation. However, a surprise loss to Mexican Andy Ruiz in the summer of 2019 left so many questions to be answered — a first career obstacle for a boxer with a glistening CV.
COMBAT SPORTS・10 DAYS AGO
Yardbarker

Anthony Joshua is 32, he’ not a rookie says Frank Warren

Tyson Fury disappointed in Anthony Joshua loss, he was ‘probably looking at Oleksandr Usyk and thinking of Tyson Fury’

Before Tyson Fury signed a contract for his trilogy against Deontay Wilder, “The Gypsy King” was just days removed from promoting a planned showdown against Anthony Joshua. The British heavyweights have been on a collision course for several years but the fight had never been closer to reality only for...
COMBAT SPORTS・9 DAYS AGO
Boxing Insider

There is absolutely no love lost between Anthony Joshua and Tyson Fury. For years on end, the two have gone back and forth with one another. At one point, a matchup between them appeared to be on the horizon. However, things have failed to materialize. Despite Fury believing that Joshua...
COMBAT SPORTS・10 DAYS AGO
The Independent

Tyson Fury has vowed not to make the same mistake as Anthony Joshua when he fights Deontay Wilder for a third time this weekend.The WBC world heavyweight champion admitted he was “wounded” after seeing his rival drop his belts to Oleksandr Usyk at Tottenham Hotspur Stadium.The defeat for AJ saw hopes of an all-British undisputed fight go up in smoke, but Fury is adamant he will not suffer an upset against the American.“It was a disappointment to see Joshua lost his fight, but you have to give all credit to the other guy it was a superb gameplay,” Fury told...
COMBAT SPORTS・11 DAYS AGO

Tyson Fury’s promoter Frank Warren has said Anthony Joshua might have to change his entire coaching team in order to beat Oleksandr Usyk in a rematch.Ukrainian Usyk outpointed Joshua in London last month to take the Briton’s heavyweight titles, with a second bout between the pair expected to take place next spring.Warren has now claimed that Joshua must take drastic measures if he is to reverse the result in a rematch with the undefeated Usyk.Speaking to SecondsOut ahead of Fury’s trilogy fight with Deontay Wilder for the WBC heavyweight belt, Warren said: “Should [Joshua] fight [Usyk] again? If he does...
COMBAT SPORTS・9 DAYS AGO
Bleacher Report

Heavyweight star Anthony Joshua has exercised his contractual rematch clause with Oleksandr Usyk for the unified heavyweight championship after losing to Usyk in September, per ESPN's Mike Coppinger. "Back in the game and looking for him to become a three-time world champion," Joshua's promoter Eddie Hearn said Saturday. The 34-year-old...
COMBAT SPORTS・7 DAYS AGO
BoxingNews24.com

By Allan Fox: Tyson Fury doesn’t believe what former IBF/WBA/WBO heavyweight champion Anthony Joshua said recently about being willing to fight him now that he’s no longer holding any world titles. Joshua, 31, says he’d like to fight the winner of this Saturday’s fight between Fury and Deontay Wilder next...
COMBAT SPORTS・11 DAYS AGO
chatsports.com

Eddie Hearn has overlooked Anthony Joshua's chances in his heavyweight rematch with Oleksandr Usyk, as the promoter accidentally let slip that he believes the Ukrainian will beat his star fighter next year. The British heavyweight activated his rematch clause over the weekend after losing his WBA, WBO, IBF and IBO...
COMBAT SPORTS・1 DAY AGO
The Independent

Deontay Wilder is likely to return to the ring next spring, according to his co-manager Shelly Finkel, as the heavyweight recovers from his knockout loss to Tyson Fury.Wilder and Fury fought to a controversial split draw in December 2018, before the Briton stopped Wilder in the seventh round of their rematch 14 months later.Their rivalry ended in Las Vegas last weekend, when Fury knocked out the American in the 11th round to retain the WBC title he took from Wilder in their second fight.While some in the sport have speculated that Wilder, 35, could retire following these back-to-back losses...
COMBAT SPORTS・3 DAYS AGO
chatsports.com

Frank Warren insists Tyson Fury WOULD still be interested in a heavyweight 'Battle of Britain' showdown with Anthony Joshua... but insists the Gypsy King would emerge victorious 'in every department'

Frank Warren has insisted a heavyweight 'Battle of Britain' between Tyson Fury and Anthony Joshua could still happen, despite the differing fortunes of the two rivals in recent weeks. Joshua lost all of his belts when he was beaten by Oleksandr Usyk at the Tottenham Hostpur stadium last month before...
COMBAT SPORTS・4 DAYS AGO
internetshots.com

Simply two weeks in the past, Anthony Joshua’s second reign as a heavyweight world champion got here was ended. The Brit has already exercised his rematch clause and is anticipated to face new champion Oleksandr Usyk early in 2022. Most observers have prompt AJ ought to have been extra aggressive...
COMBAT SPORTS・7 DAYS AGO
The Independent

Trainer Teddy Atlas says Anthony Joshua needs to be less gracious in defeat after losing to Oleksandr Usyk.Usyk beat Joshua by unanimous decision in their heavyweight title bout in September and the British star was seen joking with Usyk afterwards. This was in direct contrast to how Deontay Wilder reacted to being knocked out by Tyson Fury in their fight on Saturday night.The ‘Bronze Bomber’ refused to shake Fury’s hand and Atlas has compared the reactions to the losses.“I’m not here to make excuses, but I will say that there’s something to be said about being a sore loser,”...
COMBAT SPORTS・2 DAYS AGO