US special envoy for Haiti resigns in protest over migrant removals 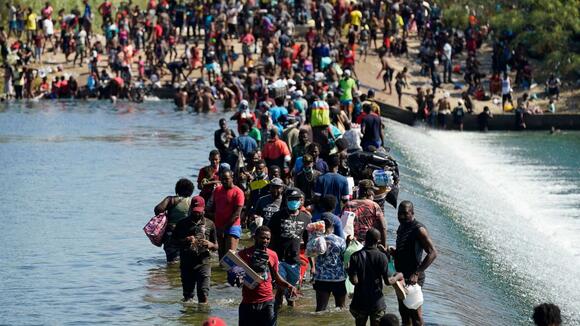 The U.S. special envoy for Haiti, Daniel Foote, has resigned in protest over the Biden administration removals of Haitians from the southern border, calling them "inhumane."

The White House pushed back strongly against Foote's criticisms, and the State Department accused him of not telling the truth about his involvement in the policy-making process.

MORE: Democrats lash out at Biden administration over handling of Haitian migrants

"I will not be associated with the United States inhumane, counterproductive decision to deport thousands of Haitian refugees and illegal immigrants to Haiti, a country where American officials are confined to secure compounds because of the danger posed by armed gangs in control of daily life," Foote wrote in the blistering letter obtained by ABC News. "Our policy approach to Haiti remains deeply flawed, and my recommendations have been ignored and dismissed, when not edited to project a narrative different from my own.”

"For him to say his proposals were ignored is simply false," Price said in a statement. "There have been multiple senior-level policy conversations on Haiti, where all proposals, including those led by Special Envoy Foote, were fully considered in a rigorous and transparent policy process. Some of those proposals were determined to be harmful to our commitment to the promotion of democracy in Haiti and were rejected during the policy process."

"It is unfortunate that, instead of participating in a solutions-oriented policy process, Special Envoy Foote has both resigned and mischaracterized the circumstances of his resignation," Price said.

"No ideas are ignored, but not all ideas are good ideas," he added. "This is a challenging moment that requires leadership. He failed to take advantage of ample opportunity to raise concerns about migration during his tenure and chose to resign instead."

"Special envoy Foote had ample opportunity to raise concerns about migration during his tenure," Psaki told ABC News White House Correspondent MaryAlice Parks on Thursday. "He never once did so. Now that wasn't his purview. His purview was, of course, being the special envoy on the ground. His positions were and his views were put forward. They were valued. They were heard. Different policy decisions were made in some circumstances."

Psaki said that the administration had, in fact, stopped using horse patrols against the Haitians in Del Rio. The Department of Homeland Security had announced the change earlier in the day, saying it was temporary.

“We have taken very specific actions as it relates to the horrific photos that we -- we’re not going to stand for in this administration,” Psaki told reporters. “I don't know if he was referring to that or something else.”

After thousands of Haitians and other migrants took shelter in an encampment under a bridge in the south Texas town of Del Rio, the Biden administration has been removing many back to Haiti and Mexico. It continued to do so Thursday despite demands from Congressional Black Caucus members and other Democrats that they be stopped.

The migrant surge comes after Haiti experienced a tumultuous summer.

In July, Haiti's president was assassinated, leaving the country politically unstable. A month later, the country was rocked by a devastating earthquake that left thousands dead. And the countries streets are still run by gangs, leaving much of the population vulnerable to daily violence.

As many as 12,000 Haitians and other migrants took shelter in an encampment under a bridge in the border town , the Biden administration has been removing many back to Haiti and Mexico.

Officials believe the 400 Mawozo gang is responsible for the recent surge in kidnappings in Hatiti.
PUBLIC SAFETY・3 DAYS AGO
NBC News

U.S. envoy to Afghanistan resigns in wake of Taliban takeover

The U.S. special representative for Afghanistan, Zalmay Khalilzad, announced he is stepping down from his role less than two months after the United States' chaotic withdrawal from the country. “Tomorrow, I step down from my position as the Special Representative for Afghanistan Reconciliation,” Khalilzad said in his Monday resignation letter...
U.S. POLITICS・2 DAYS AGO
Fox News

US special envoy for Afghanistan steps down after withdrawal

The U.S. special envoy for Afghanistan is stepping down following the chaotic American withdrawal from the country, the State Department said Monday. Zalmay Khalilzad will leave the post this week after more than three years on the job under both the Trump and Biden administrations. He had been criticized for not pressing the Taliban hard enough in peace talks begun while Trump was president but Secretary of State Antony Blinken thanked him for his work.
U.S. POLITICS・2 DAYS AGO
Washington Post

Zalmay Khalilzad, who negotiated the U.S. withdrawal agreement with the Taliban under Donald Trump, has resigned as special envoy to Afghanistan, effective Tuesday. The Biden administration, which kept Khalilzad in his job for another nine months, was expected to announce the resignation later Monday. “I decided that now is the right time,” Khalilzad said in a resignation letter to Secretary of State Antony Blinken, “at a juncture when we are entering a new phase in our Afghanistan policy.”
U.S. POLITICS・3 DAYS AGO

Activists gathered outside of P.S. 269 in Flatbush Sunday to raise awareness about the treatment of Haitian immigrants at the U.S. border.
IMMIGRATION・4 DAYS AGO
ABC7

Former President Trump made baseless remarks about Haitians trying to enter the United States, saying most of them "probably have AIDS" and letting them in is a "death wish."
POTUS・11 DAYS AGO
Reuters

Solution on migration from Haiti has to be led by U.S., Mexico - envoy

MEXICO CITY, Oct 9 (Reuters) - A solution on a new wave of migration from Haiti has to be led by both the United States and Mexico, the U.S. ambassador to Mexico, Ken Salazar, said on Saturday. "It is a very significant issue for both countries, it's a significant issue...
IMMIGRATION・12 DAYS AGO
NBC News

Daniel Foote, who resigned his position as special envoy to Haiti, spoke publicly for the first time this week and protested the deportation of thousands of Haitians on humanitarian grounds. In Port-au-Prince, a trauma surgeon tells NBC News' Jacob Soboroff that he estimates 90 percent of his patients would consider leaving, himself included, to flee poverty and violence.Oct. 8, 2021.
IMMIGRATION・13 DAYS AGO

Chorus of Voices Echo Former Haiti Special Envoy: “Deportation Back to Haiti is Not the Answer Right Now”

Democrats in Congress, Advocates, and Civil Rights Leaders Condemn Biden Administration’s Decision to Continue Deportations “It’s gonna be a stain on this administration”. Yesterday former special envoy to Haiti Daniel Foote testified in a briefing before the House Foreign Affairs Committee in his first public comments since resigning in protest...
FOREIGN POLICY・13 DAYS AGO
northwestgeorgianews.com

Former US envoy to Haiti tells Congress: ‘No one asked me about the deportations’

When the Biden administration last month decided to deport thousands of Haitian migrants living underneath a bridge in Del Rio, Texas, along the U.S.-Mexico border, the man who was supposed to be in charge of all U.S. things related to Haiti was not even consulted. “No one asked me about...
IMMIGRATION・13 DAYS AGO
swiowanewssource.com

The former U.S. Special Envoy to Haiti, Daniel Foote, told House lawmakers that deportation of Haitian migrants will not "make Haiti more stable. In fact, it's going to make it worse.” (Oct. 7) Subscribe for more Breaking News: http://smarturl.it/AssociatedPress. Website: https://apnews.com. Instagram: https://www.instagram.com/APNews/. ​. You can license this story through...
WORLD・14 DAYS AGO
kfgo.com

WASHINGTON (Reuters) – A former U.S. special envoy to Haiti who blasted the Biden administration as he resigned last month over the deportations of hundreds of migrants told U.S. lawmakers on Thursday that Washington must rethink its approach to the Caribbean nation. “Deportation in the short term is not going...
IMMIGRATION・14 DAYS AGO

US envoy who quit says Haiti PM not credible

The former US envoy on Haiti who resigned in protest last month testified Thursday that the United States made a mistake by backing Prime Minister Ariel Henry, saying he had no credibility. Foote said he had no personal grudge against Henry but believed the "consensus is nearly unanimous" among the public that the prime minister belonged to a ruling party that was to blame for Haiti's problems.
POLITICS・14 DAYS AGO
Vice

Want the best of VICE News straight to your inbox? Sign up here. Images of Border Patrol agents on horseback chasing down Haitian migrants as they sought refuge from the devastating conditions in their home country reopened old but familiar wounds for many Black Americans. “The first feeling is just...
LAW ENFORCEMENT・28 DAYS AGO
CBS 42

Negotiations drag on over 17 missionaries kidnapped in Haiti

PORT-AU-PRINCE, Haiti (AP) — Negotiations stretched into a fourth day seeking the return of 17 members of a U.S.-based missionary group kidnapped over the weekend by a violent gang that is demanding $1 million ransom per person. The group includes five children whose ages range from 8 months to 15 years, although authorities were not […]
PUBLIC SAFETY・1 DAY AGO
WTKR News 3

FBI agents and other U.S. officials are helping Haitian authorities hunt for 12 adults and five children linked to Christian Aid Ministries in Ohio, who were kidnapped Saturday during a trip to visit an orphanage.
PROTESTS・2 DAYS AGO

Top US Official to Visit Haiti

The United States Department of State says a top official will travel to Haiti on Tuesday to meet with officials on the ongoing political, economic and humanitarian crises in the French-speaking Caribbean country. It said Under Secretary of State for Civilian Security, Democracy and Human Rights Uzra Zeya will travel...
WORLD・10 DAYS AGO
albuquerquenews.net

Washington [US], October 22 (ANI): Indian envoy to the US, Taranjit Singh Sandhu, has said that there is "very strong and deep appreciation" in the United States as India achieved the one billion COVID-19 vaccinations milestone. Speaking at Public Affairs Forum of India's 8th National Forum 2021 on Thursday, Sandhu...
PUBLIC HEALTH・8 HOURS AGO
AFP

North Korea accuses US of 'double standards' over SLBM test

North Korea accused the United States of "double standards" over weapons testing, state media reported Thursday after an emergency UN Security Council meeting on the issue. The statement added Washington's criticism of the North for "developing and test-firing the same weapon system as the one the US possesses or is developing is a clear expression of double standards".
MILITARY・1 DAY AGO
Birmingham Star

Kabul [Afghanistan], October 19 (ANI/Sputnik): The Taliban expressed hopes to continue cooperation with the new US special envoy for Afghanistan, Thomas West, and looks forward to the full implementation of the Doha agreement, reported Sputnik. Abdul Kahar Balkhi, the Taliban's spokesperson, said in a tweet: "We saw good progress in...
POLITICS・2 DAYS AGO