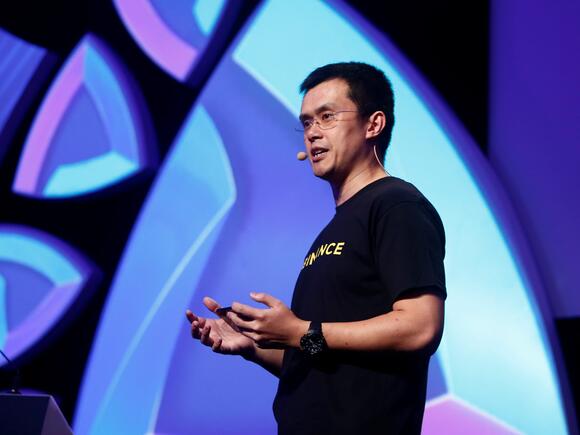 Suex on Tuesday was sanctioned by the Biden Administration for its role in laundering financial transactions for ransomware actors. This marked the first time the Treasury has ever blacklisted a cryptocurrency exchange.

The agency added Suex to its Specially Designated Nationals list, blacklisting 25 blockchain addresses the Czech Republic-based company used. The designation would generally ban all US citizens from engaging in transactions with them.

"We de-platformed these accounts based on internal safeguards," Binance said. "Information regarding the addresses in the announcement, as well as other information from our internal investigation, was shared with the appropriate authorities."

Binance added that several accounts related to the addresses that the Treasury flagged were identified by its investigative team earlier this year.

"Make no mistake - this is a positive development for the industry and the millions of innovators, consumers, and investors across the globe that contribute to blockchain's growth each day," Binance said.

An analysis of transactions of Suex showed that over 40% were associated with illicit actors, according to the Treasury's announcement , adding that the crypto exchange also facilitated illicit funds from at least eight ransomware variants.

Suex, according to Binance, is just the latest illicit entity it took action against. Most recently, its efforts included the Fancycat operation and Bulletproof Exchanger Project .

"At Binance, we recognize what it means to be the industry leader versus simply being the largest player in the industry," the company said. "As an industry, we must tackle this challenge head-on in partnership with law enforcement across the globe."

Binance itself has not been without controversy. It is being probed over possible insider trading and market manipulation by US regulators. It also recently announced shutting down cryptocurrency derivative products for existing customers in Australia by the end of the year to appease regulators.

But in September, Binance, which was founded in 2017 and does not have a formal headquarters, said it needs centralized headquarters to work well with regulators all over the world.

The admission comes after months of being slapped with multiple warnings , and in some jurisdictions, banned from operating due to its failure to register with local regulators.

An ethereum-based ETF may come as soon as this year, but other altcoin funds will have to wait, an expert says

For other altcoin-futures ETFs, the question is if the underlying coins will list on the CME, said Trey Griggs, US CEO of crypto trading firm GSR.
MARKETS・19 HOURS AGO
Markets Insider

More than a thousand issues related to the fintech operations of 14 internet platforms were identified by authorities.
CHINA・18 HOURS AGO
Markets Insider

The company's bitcoin futures ETF will start trading in the US on Friday, October 22, rivalling ProShares' own launch earlier this week, reports said.
MARKETS・21 HOURS AGO

A formal move to green-light crypto trading by banks would probably be met with resistance by advocates of tough financial rules.
POTUS・11 HOURS AGO
Markets Insider

"A lot of people have been asking for the ability to send and receive cryptocurrencies," Vlad Tenev told CNBC on Thursday.
MARKETS・17 HOURS AGO

Jones, the founder and chief investment officer of Tudor Investment Corporation, told CNBC he has crypto in single digits in his portfolio.
ECONOMY・2 DAYS AGO
Markets Insider

The cryptocurrency market is the "most honest market we have in the country," the venture capitalist Peter Thiel said, according to The Information.
MARKETS・2 DAYS AGO
Markets Insider

The investment was "a watershed moment for bitcoin and its place in public pensions," said NYDIG, which helped with the cryptocurrency purchases.
HOUSTON, TX・1 DAY AGO
CoinTelegraph

Wally Adeyemo, the Deputy Secretary of the United States Department of the Treasury, said the department would likely be enforcing more sanctions on companies involved in illicit transactions related to ransomware payments. Speaking at an online event hosted by the Center for a New American Security with former Treasury Secretary...
U.S. POLITICS・1 DAY AGO
Markets Insider

Bond giant Pimco says it's ready to embrace crypto, which it sees as a potential store of value and inflation hedge

Bitcoin is soaring because inflation fears are eating at investors - not because of crypto ETFs, JPMorgan says

"The perception of bitcoin as a better inflation hedge than gold is the main reason for the current upswing," JPMorgan said.
BUSINESS・1 DAY AGO
decrypt.co

After reaching an all-time high this week, the price of Bitcoin is down 5.5% in the last 24 hours. But traders on Binance US watched this morning as the price of the asset plunged quite a bit further: 87%. The American affiliate of the leading international cryptocurrency exchange now says the flash crash was caused by an error in a trading algorithm.
COMMODITIES & FUTURE・1 DAY AGO
MarketWatch

U.S. Securities and Exchange Commission Chairman Gary Gensler encouraged crypto entrepreneurs to seek to comply with U.S. financial and banking regulations, placing special emphasis on the need for oversight of stablecoins, or digital assets that seek to maintain a peg to the U.S. dollar.
MARKETS・1 DAY AGO
Markets Insider

The overall demand for BITO was likely from a combination of investment advisors, private banking clients, and funds shorting the ETF, Vanda said.
RETAIL・2 DAYS AGO
Markets Insider