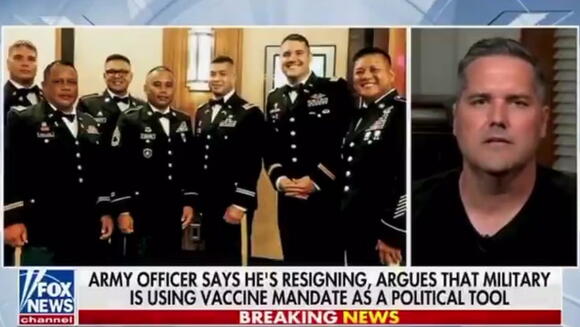 A US Army officer has explained on Fox News why he resigned over the Department of Defense vaccine mandate, but admitted he had agreed to all his other Army shots.

“First, and foremost, I am incapable of subjecting myself to the unlawful, unethical, immoral, and tyrannical to sit still and allow a serum to be injected into my flesh against my will and better judgment,” former Officer Paul Douglas Hague wrote in his resignation letter, which his wife posted on Twitter at the beginning of September.

He also cited a “complete lack of confidence in the presidential administration,” as a reason for quitting and forfeiting his pension after 18 years in the military.

“But I don’t want the Covid vaccine and I don’t plan on getting it. But I’ve had all the other army vaccines . I’ve had eight anthrax shots. I’ve had the smallpox vaccination. I’ve had ’em all. So it’s really not about whether or not I’ll get the shot ... it’s about principle.”

The Pentagon said that coronavirus vaccinations are mandatory for the US’s 1.3 million active-duty troops, and all must take the shot before  15 December or face suspension or dismissal.

“While soldiers who refuse the vaccine will first be counseled by their chain of command and medical providers,” the official Army guidelines explain, “continued failure to comply could result in administrative or nonjudicial punishment – to include relief of duties or discharge from the service.”

Despite agreeing to a number of other vaccinations required by the US Army, Mr Hague alleged in his resignation letter that he thought the recent Covid-19 vaccine mandate was part of a “Marxist takeover of the military and United States government at their upper echelons”.

This is not the first military personnel to speak out against the Biden Administration on social media in recent weeks. In late August, Marine Lt Col Stuart Scheller posted videos on social media criticising the government in its handling of the US military withdrawal from Afghanistan. He knew one of the 13 US service members killed in the Kabul suicide bomb attack. Scheller demanded accountability from those who were overseeing decisions in Afghanistan.

“I’m not saying we’ve got to be in Afghanistan forever, but I am saying: Did any of you throw your rank on the table and say ‘Hey, it’s a bad idea to evacuate Bagram Airfield, a strategic airbase, before we evacuate everyone.’”

After 17 years of service, and three years until he gets a pension, the US marine was relieved of command following the release of his video due to a “loss of trust and confidence in his ability to command”.

Mr Scheller stated on screen that he was “resigning my commission as a United States Marine, effective now … “I am forfeiting retirement, all entitlements,” Mr Scheller said.

He agreed to all the mandatory vaccinations because they were studied and developed over many years. By definition it is not a vaccine. It is experimental. No one can say what the long term effects could be. I agree with his statement that he doesn't want to be subjected to something against his will and better judgment. I had the vaccine by choice. MY CHOICE

ok, his right, it is a rather small point if a person is career in my thinking, but ok, there are many who do not mind the vaccine. he got his spot in the sun today and tomorrow who will remember this besides him?

my hats off to this officer. it takes courage to do what he has done. this vaccine is a lie by evil democrats. i know of perfectly healthy 30-40 years old had vaccine, now have numerous health problems. no thanks

Why the Pentagon suddenly removed thousands of Afghanistan War images

This story is excerpted from Task & Purpose. The Pentagon has quietly removed a massive collection of Afghanistan War footage totaling more than 120,000 photos and 17,000 videos from its official visual record. The images and videos, which date back more than a decade, were previously published to the Defense...
MILITARY・24 DAYS AGO
americanmilitarynews.com

Five U.S. Navy SEAL veterans, who are all Republican Congressional candidates in the 2022 mid-term elections, joined together on live television this week to call for accountability for the U.S. citizens still left in Afghanistan two months after the U.S. military concluded its civilian evacuation efforts and left the country.
MILITARY・29 DAYS AGO
Esquire

The New York Times reported on a special operation in Syria from 2019 in which an American F-15 dropped a 500-pound bomb on a crowd of women and children, despite the fact that there was a drone with eyes on the crowd at the time. “Who dropped that?” a confused...
MILITARY・11 DAYS AGO
americanmilitarynews.com

On Thursday, the U.S. Senate passed a resolution by Sen. Todd Young (R-IN) to honor the 13 U.S. service members killed in a suicide bombing in Kabul, Afghanistan in August with Congressional Gold Medals. The resolution already passed in the U.S. House of Representatives in October with unanimous approval and now goes to President Joe Biden, who is expected to sign.
CONGRESS & COURTS・4 DAYS AGO

Capt. Scott B. Curtis told The New York Times most people in the military agree "torture is wrong." Curtis wrote a letter condemning the torture a Guantanamo Bay detainee went through. The letter, signed by seven senior military officials, called it a "stain" on the US' "moral fiber." A Navy...
MILITARY・20 DAYS AGO
Fox News

The U.S. Air Force removed 23 recruits from boot camp last week after they refused to get the COVID-19 vaccine ahead of the Nov. 2 deadline, defense officials confirmed to Fox News. According to Pentagon officials, there is no military-wide punishment for those who refuse the vaccine, and each service...
AEROSPACE & DEFENSE・24 DAYS AGO
Telegraph

The Royal Marines were able to dominate US forces in a training exercise because the Pentagon is too focussed on culture wars rather than actual fighting, a prominent Republican senator said. Josh Hawley, who sits on the Senate armed services committee, lambasted the US defence secretary and America's top general...
MILITARY・21 DAYS AGO
Fortune

Subscribe to Fortune Daily to get essential business stories delivered straight to your inbox each morning. In 1965, Bob Dylan performed his first electric concert at the Newport Folk Festival and got booed off the stage. In 2021, Kathleen Hicks, the deputy secretary of the Department of Defense and highest-ranking woman in Pentagon history, made her own visit to Newport, R.I. And like the iconic folkie-turned-rocker, her mission was to go electric.
AEROSPACE & DEFENSE・14 DAYS AGO

On Tuesday, First Liberty Institute filed a federal lawsuit on behalf of more than three dozen U.S. Navy SEALs and other Naval Special Warfare personnel against President Joe Biden’s administration and the Department of Defense. The lawsuit alleges the U.S. government is infringing on troops’ First Amendment right to be free from governmental religious persecution by refusing to grant religious exemptions to the COVID-19 vaccine mandate.
PUBLIC HEALTH・16 DAYS AGO
americanmilitarynews.com

The Pentagon admitted last week that President Joe Biden has yet to retrieve dozens of immediate family members of U.S. troops and Defense Department civilian employees that the administration abandoned in Afghanistan during the disastrous withdrawal and evacuation from Kabul in late August. According to a November 4 memo issued...
MILITARY・16 DAYS AGO
Fox News

US Army Secretary: National Guard members who refuse vaccine will not ‘continue service’

U.S. Army Secretary Christine Wormuth this week warned members of the National Guard that they may be barred from "continued service" if they refuse to get vaccinated against COVID-19.
PUBLIC HEALTH・7 DAYS AGO

Members of US Military Troops, Veterans Barred From ReceivingTheir Benefits if They Remain Unvaccinated

The US Department of Defense (DOD) announced Wednesday that service personnel who refuse to be vaccinated against COVID-19 may lose their eligibility for veterans' benefits. The U.S. Troops Not To Receive Benefits If They Refuse To Get Vaccinated. In a recently published article in Newsweek, troops who reject the vaccination...
MILITARY・22 DAYS AGO
The Independent

Winsome Sears, who was recently elected lieutenant governor of Virginia, has declined to confirm if she has been vaccinated against Covid-19.Lt Governor Sears was asked by CNN host Dana Bash during an interview on Sunday morning whether she was vaccinated against Covid-19.The lieutenant governor-elect refused to answer directly. Instead, she went off on a bizarre tangent alleging that such questions were a “slippery slop[e]” leading to questions about her “DNA”. She said: “And so we understand this, this thing about slippery slopes. The minute that I start telling you about my vaccine status, we're gonna be down the bottom...
PUBLIC HEALTH・5 DAYS AGO
Fox News

This is the fourth part of a Fox News Digital Originals series about the fall of Kabul and the hectic and heroic 96-hour effort to evacuate Afghans fearing retribution from the Taliban. Part 1 Part 2 Part 3. President Biden’s top military advisers should have predicted Afghanistan’s imminent collapse –...
MILITARY・5 DAYS AGO
Newsweek

An Army surgeon testified this week that her warnings about the COVID-19 vaccine were ignored by United States military leaders, who later notified the doctor that she would no longer see sick patients. Army Lt. Col. Theresa Long, an Army flight surgeon and aviation safety officer stationed at Fort Rucker,...
MILITARY・21 DAYS AGO
FOX 11 and 41

YAKIMA, WA – A Navy Veteran in Yakima has been having a hard time getting health care after he was told he never went to war. Freshly out of High School 19-year-old Otto Von Kuehnert joined the US Navy in 1984 and was sent out to Libya in 1986 in a retaliation for the Libyan terrorism against American troops and citizens in 1985 where five American citizens were killed at airports in Rome and Vienna.
YAKIMA, WA・20 DAYS AGO
Daily Breeze

Marines and sailors who refuse the COVID shot will be discharged, will lose some benefits

Marines and sailors who choose not to get the COVID-19 vaccine by the end of November will be released from the service, in a general but honorable discharge, officials with those services have said, making them ineligible for some benefits from the GI Bill. An administrative order recently issued by...
MILITARY・8 DAYS AGO
Seattle Times

Up to 12,000 Air Force personnel have rejected orders to get fully vaccinated against the coronavirus despite a Pentagon mandate and officials say it is too late for them to do so by Tuesday’s deadline, posing a first major test for military leaders whose August directive has been met with defiance among a segment of the force.
AEROSPACE & DEFENSE・29 DAYS AGO