Elliott: Ryan Getzlaf isn't ready for retirement just yet. He's back for Year 17 with the Ducks 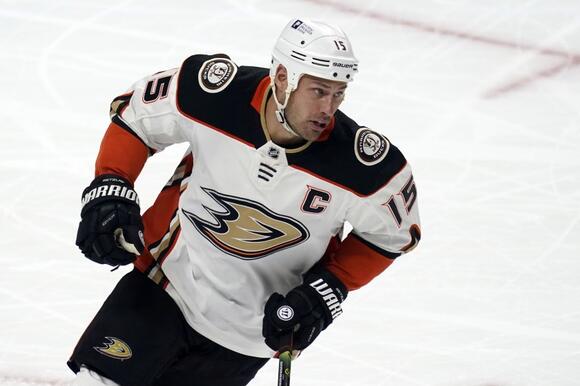 Drafted by the Ducks in 2003, a member of their Stanley Cup team in 2007 and their captain since 2010, Getzlaf was nearing the end of an eight-year contract. The Ducks were struggling — again — and he was soon to become an unrestricted free agent. Contenders eyed him as someone who might put them over the top, but he had never imagined playing anywhere else.

Getzlaf and his wife, Paige, an Orange County native, had discussed the best options for them and their four children. Getzlaf took their decision to general manager Bob Murray.

“I had a no-move clause, and I told him that if it came where he got offered something that could make this team better, he owed it to the team to bring it to me and at least ask what I would do,” Getzlaf said. Murray checked with him again the day of the deadline, before the team plane left for San Jose. “Ultimately I told Bob that if the deal’s right, then you’ve got to do it,” Getzlaf said.

Murray had something going but it fell through. Getzlaf was relieved. “There was so much back and forth,” he said, “where for 10 minutes I’d be so excited to have an opportunity to play for the Cup again, and then another 10 minutes would go by and I’d think of everything I’d be leaving behind with the fans, the experience I’ve had with the organization, all that stuff.”

Getzlaf stayed. He stayed again this summer when, at 36, he got his first chance to test the free-agent market. “Even at my age it was exciting to have phone calls that teams wanted you,” he said.

Getzlaf, who holds the Ducks’ franchise assists record with 703 and is six points from matching Teemu Selanne ’s franchise record of 988, signed a one-year deal worth $3 million plus up to $1.5 million in bonuses. It might be the last playing contract he signs.

The Saskatchewan native, a two-time Olympic gold medalist for Canada, had never thought much about his future until about a year and a half ago. His scoring had declined, which could be expected in a league fueled by youth and speed. Then his totals plunged last season to five goals and 17 points in 48 games while his ice time fell to an average of 16 minutes and 35 seconds per game, his lowest since his first full season in 2006-07.

Signing for one year allows him to see how much he has left — and to see how much better the Ducks will be after adding Jeff Solomon to their front office as vice president of hockey operations and hiring Geoff Ward, Newell Brown and Mike Stothers as assistants to coach Dallas Eakins. Maybe one of them will miraculously make over a power play that ranked last in the NHL last season.

The idea of retiring has floated through his mind but isn't at the forefront, Getzlaf said Tuesday, a day before players reported to training camp. “It’s really hard to make any kind of assumption based on how last year was, such a weird year, the unsuccess we had, that kind of stuff. It wasn’t a very fun season," he said during a chat outside the team's practice facility in Irvine.

"So, I’m hoping this year going in with the world somewhat getting back to normal, hopefully the fans are back in the building, all that kind of stuff, can create energy and we can really enjoy ourselves this season.”

He called the organizational changes “a good step forward” toward improving preparation and communication. “In our business you spend a lot of time at the rink. You spend a lot of time together. And if somebody is dictating what you do every day it gets a little monotonous. It gets old,” he said.

“I think there’s been a little bit more player input on how to make things more exciting at the rink, how to have fun while we’re here. Which is not an easy thing to do when you’re not winning. When you’re winning, everything’s easy. There’s nothing hard about managing or coaching a hockey team when you’re winning. Everybody’s happy and happy to be there every day, and we’re trying to create that again.”

The Ducks must turn the keys to the team over to their kids this season, but Getzlaf can still play a key role as a mentor and leader.

“He’s not going to go, ‘Way to go kid. You got me and I’m out.’ He’s going to fight for it. And I know that’s how teams get better, that push and that pull.”

Getzlaf said he’s not much of a stats guy but he’s honored to be within reach of Selanne’s team points record. He was more deeply touched by the suggestion his No. 15 surely will join Selanne’s 8, Paul Kariya’s 9 and Scott Niedermayer’s 27 among the team’s retired jerseys someday.

“That’s always been something I’d take a lot more pride in than any numbers, I think, is being here, being part of this organization forever,” he said.

For this season, at least, he's home where he belongs.

ANAHEIM — Trevor Zegras, a 20-year-old rookie center, stepped behind the lectern and in front of the klieg lights first Wednesday, taking off his cap and apologizing for his sweating mane of hair. He smiled broadly, laughed and spoke of his sense of anticipation hours before his first NHL opening night.
NHL・11 DAYS AGO
Sportsnaut

Kyle Connor had two goals and an assist to help the Winnipeg Jets win their home opener on Thursday night,
NHL・2 DAYS AGO
NHL

NEW YORK -- Anaheim Ducks forward Ryan Getzlaf has been fined $1,000 for a dangerous trip against Minnesota Wild forward Joel Eriksson Ek during NHL Game No. 75 in Minnesota on Saturday, Oct. 23, the National Hockey League's Department of Player Safety announced today. The incident occurred at 1:33 of...
NHL・4 HOURS AGO
Sportsnet.ca

Anaheim Ducks centre Ryan Getzlaf has been fined $1,000 for a dangerous trip on Minnesota Wild center Joel Eriksson Ek, the National Hockey League’s Department of Player Safety announced on Sunday. The incident happened at 1:33 of overtime when the two teams tangled Oct. 23. A penalty was not issued...
NHL・4 HOURS AGO

Major Update On When Sidney Crosby Will Return To Penguins

Ever since this started, we’ve known that the Sabres have wanted Peyton Krebs in any trade for Eichel with the Vegas Golden Knights. Krebs was the Golden Knights first pick in 2019
NHL・18 DAYS AGO
bleachernation.com

He’s Back: Blackhawks Sign Erik Gustafsson to a One-Year Deal

On Sunday afternoon, the Chicago Blackhawks decided to gas-up the ol’ Gus Bus once again, signing defenseman Erik Gustafsson to a one-year deal, worth $800,000. Gustafsson had been in training camp with the New York Islanders on a PTO deal, but had been released from camp without a deal. You’ll...
NHL・14 DAYS AGO

In today’s NHL rumors rundown, the Los Angeles Kings might be getting good news after what looked like a serious injury to defenseman Drew Doughty. Meanwhile, the status on a Vladimir Tarasenko trade seems to change weekly. How long will he be staying with the St. Louis Blues? The Ottawa Senators seemed to have dismissed rumors that they’re looking to add a top-nine center to their group and there were plenty of scouts at the Blackhawks game on Thursday, many of them likely checking in on Dylan Strome.
NHL・1 DAY AGO
NBC Chicago

The Chicago Blackhawks are aiming to get back into the playoffs after missing the postseason last year, but their two longest-tenured players could find themselves in elite company if they have big individual seasons. Patrick Kane is preparing for his 15th NHL season, which will see the puck drop on...
NHL・13 DAYS AGO
WGR550

The Sabres name Okposo and Girgensons to be their captains

Granato was looking for leadership last year when he became the head coach. He said, “That’s where Kyle was great last year. The older guys made it easy for me to be an incoming head coach and easier for that whole room
NHL・12 DAYS AGO
The Oregonian

EUGENE — More than ever before, Travis Dye is the focal point of Oregon’s running game for the rest of 2021. The fourth-year junior has split time with CJ Verdell throughout his career, but with Verdell going down with a season-ending left left injury the No. 9 Ducks (4-1, 1-1 Pac-12) will call on Dye with even greater regularity.
COLLEGE SPORTS・13 DAYS AGO

Enjoy Patrick Kane’s Most Incredible Moments from His 1,000 Games with the Blackhawks

Tonight, before their contest with the Vancouver Canucks, the Chicago Blackhawks will honor Patrick Kane for playing 1,000 games in the Chicago sweater. I don’t know about you, but I have never personally witnessed a more extraordinary Blackhawks player in my lifetime. I’m 31 now, I was 17 when Kane was drafted in June of 2007, so Kane’s career has spanned about half of my life (and all of my adult life). I can’t even think about the Blackhawks without 88 skating on the right-wing every night, so thinking about him playing over 1,000 games so far makes me sad that we’re in the twilight of one of the greatest players in franchise history’s career.
NHL・3 DAYS AGO
WNCT

MONTREAL (AP) — Jesperi Kotkaniemi scored his first goal for Carolina in his return to Montreal, helping the Hurricanes beat the winless Canadiens 4-1 on Thursday night. The 21-year-old Kotkaniemi left the Canadiens for the Hurricanes over the summer after signing a $6.1 million offer sheet. The Finn was booed every time he touched the […]
NHL・2 DAYS AGO
WGR550

The Buffalo Sabres lost their first game of the season thanks to the Boston Bruins. The blue and gold were defeated 4-1 on Friday night at KeyBank Center.
NHL・1 DAY AGO
93.7 The Fan

Rookie Drew O’Connor scored twice and Marcus Pettersson added a goal and two assists Saturday as the Pittsburgh Penguins, despite
NHL・20 HOURS AGO