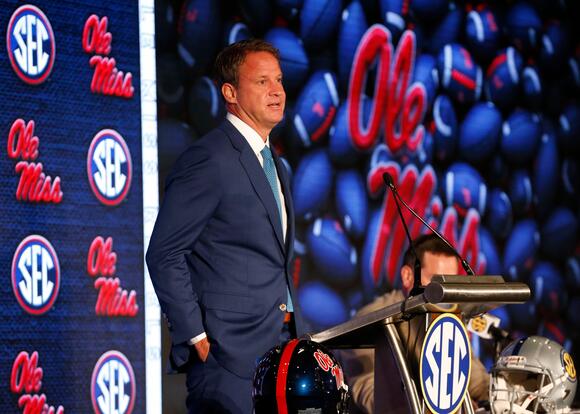 Ole Miss football coach Lane Kiffin spoke about the talent on the Alabama roster on the SEC teleconference Wednesday ahead of his team's matchup against the No. 1 Crimson Tide on Oct. 2.

Kiffin mentioned the talent Alabama brings in out of high school as well as the transfer portal. He marvels at how well coach Nick Saban recruits college players as well as high school players.

"For years now you’ve had the issue when you play Alabama, they have five-star players like an NFL team and better than some NFL teams at certain positions. Now they go cherry-pick players for any holes they may have like an Ohio State receiver or a Tennessee linebacker," Kiffin said.

When Kiffin mentions "cherry-picking" he is talking about the pull Alabama has to get top transfers.

Ole Miss has an open week this week before playing Alabama next Saturday.

Alabama hosts Southern Miss on Saturday at Bryant-Denny Stadium at 6:30 p.m. It will be televised on the SEC Network.

After the Alabama Crimson Tide defeated the Tennessee Volunteers 52-24 Saturday night at Bryant-Denny Stadium, head coach Nick Saban finished his last interview on the field, and as usual, walked toward the Alabama tunnel. But, Saban quickly realized he wasn't ready to go home just yet. The coach turned around...
ALABAMA STATE・1 DAY AGO
theadvocate.com

Ole Miss coach Lane Kiffin was asked about Ed Orgeron and LSU. Here's what he said.

The week that Ed Orgeron made public his intentions to step down as the LSU coach at the end of the season coincides with a game against a former boss and fellow USC staff member. LSU travels to take on Ole Miss and Lane Kiffin at 2:30 p.m. on Saturday...
COLLEGE SPORTS・7 DAYS AGO
Golf Digest

College football fans, particularly the diehards of the SEC, can sometimes forget that the players are humans. This is especially true for kickers, who are expected to do their job and are only remembered when they don't do it, which is usually on the biggest stage - the end of the game.
TEXAS STATE・14 DAYS AGO
FanBuzz

The Ed Orgeron era at LSU is over 643 days after winning a national championship. A new coach will head the Tigers in 2022. That’s college football for you. Orgeron will always be remembered for catching lighting in a bottle in 2019. His smartest move was bringing in wiz kid Joe Brady as his passing game coordinator. Brady’s scheme saw quarterback Joe Burrow produce one of the best seasons in college football history and a Heisman Trophy to go along with it. Throwing to future NFL stud wide receivers Justin Jefferson and Ja’Marr Chase certainly didn’t hurt. Neither did having running back Clyde Edwards-Helaire in the backfield. It was the perfect system for the perfect players at the perfect time.
NFL・6 DAYS AGO

Is there a new front runner for the LSU football coaching job?

There might be a new front-runner for the LSU football head coaching job. And his name is Lane Kiffin. On Saturday afternoon, it felt like Kiffin was auditioning to replace Ed Orgeron. Kiffin’s Ole Miss Rebels knocked off LSU 31-17, avenging their loss to the Tigers in 2020. One of...
COLLEGE SPORTS・2 DAYS AGO
Sportsnaut

Ed Orgeron is out after the 2021 season, creating the best opening in college football and opening the door to
NFL・3 DAYS AGO
Las Cruces Sun-News

OXFORD, Miss. – LSU athletics director Scott Woodward should have a couple rules for his football coaching search. If you lose to Illinois at home, you’re out. If you lose to LSU’s lame-duck coach Ed Orgeron, you’re out. Applying those standards, Woodward can shred James Franklin’s résumé after Penn State...
OXFORD, MS・2 DAYS AGO
Bleacher Report

The SEC has docked the University of Tennessee $250,000 after fans threw objects onto the field and at the opposing team during and after the Volunteers' 31-26 loss to Ole Miss at Knoxville's Neyland Stadium last Saturday. Tennessee's reprimand includes other requirements:. Of note, Tennessee is required to use all...
TENNESSEE STATE・7 DAYS AGO

AUBURN — When Auburn football returns to action from its off week, it will be back under the lights. The Tigers (5-2, 2-1 SEC) will host Ole Miss at 6 p.m. Oct. 30 in Jordan-Hare Stadium. The high-stakes showdown will be televised on ESPN. Auburn brings momentum into its off...
AUBURN, AL・7 DAYS AGO
Sporting News

The SEC has issued a statement condemning Tennessee fans who threw trash on the sidelines of Neyland Stadium late in Saturday's loss to No. 13 Ole Miss. Volunteers fans in the crowd — welcoming former one-time coach Lane Kiffin back to Knoxville for the first time as a head coach — were angry at officials who ruled Tennessee did not reach the line to gain on fourth-and-24 late in the game. They subsequently threw trash on the sideline, not only pelting Kiffin and his team but also forcing the evacuation of Tennessee's band, dance team and cheerleaders. That resulted in a 20-minute delay.
TENNESSEE STATE・8 DAYS AGO
On3.com

Lane Kiffin in just his second season at Ole Miss has constructed an offensive powerhouse — that much is clear. But the No. 13 Rebels are far from perfect, and if their 52-21 win over Arkansas last week proved anything, it’s that they need to fix their porous defense. Kiffin’s...
COLLEGE SPORTS・13 DAYS AGO
Houma Courier

OXFORD — Ed Orgeron will not be returning as LSU's football coach after 2021. Ole Miss coach Lane Kiffin has worked with Orgeron as long as anyone but will have to be the first coach to go against him following Sunday's announcement. Led by Kiffin, No. 12 Ole Miss (5-1,...
COLLEGE SPORTS・7 DAYS AGO

Tennessee coach Josh Heupel took the podium Monday to recap the Vols’ win over South Carolina and to discuss this weekend’s long-awaited matchup against Ole Miss. He gave an injury update, discussed Heisman candidate Matt Corral and even dug into how he’s preparing to face Lane Kiffin. All of that...
COLLEGE SPORTS・13 DAYS AGO
abc17news.com

OXFORD, Miss. (AP) — Mississippi coach Lane Kiffin isn’t optimistic about quarterback Matt Corral’s availability against LSU. Corral rushed 30 times for 195 yards in the 12th-ranked Rebels’ 31-26 win over Tennessee. Kiffin says the performance took a physical tollon Corral. On Monday the coach said: “Hopefully he’ll play but I’m not feeling really good about that right now.” Corral is a leading candidate for the Heisman Trophy. He said after the game he had rolled his ankle but that it felt fine.
MISSISSIPPI STATE・7 DAYS AGO
Washington Post

Kiffin's 1st game at Vols as head coach of No. 13 Ole Miss

College football fans have been cracking jokes all day over Ole Miss head football coach Lane Kiffin and his pre-game outfit. The Ole Miss Rebels retired the jersey of former quarterback Eli Manning on Saturday afternoon. And it goes without saying that Lane Kiffin was as ready for the occasion as anyone. Earlier on in the afternoon, Kiffin was seen getting off the team bus while wearing an Eli Manning jersey. Sure, it wasn’t Manning’s old Rebels jersey but it was still a cool honor to see him wearing the two-time Super Bowl winner’s New York Giants jersey.
COLLEGE SPORTS・2 DAYS AGO

Each week, Rocky Top Insider will take you behind the scenes with a question and answer with a media member who covers Tennessee’s opponent. This week, the Clarion Ledger’s Ole Miss beat writer Nick Suss discussed Ole Miss’ fantastic offense, Lane Kiffin’s fourth down aggression and more. What were the...
COLLEGE SPORTS・11 DAYS AGO
saturdaydownsouth.com

Lane Kiffin and the Ole Miss Rebels escaped Knoxville with a 31-26 win (and serious injury). Volunteers fans threw golf balls, bottles and other objects onto the field that caused a delay in the game with 54 seconds remaining in the 4th quarter. Kiffin was hit with a golf ball near the end of the game, and of course, the Ole Miss head coach is keeping it. He even took it with him to his postgame press conference.
TENNESSEE STATE・8 DAYS AGO
On3.com

Lane Kiffin is getting Ole Miss ready to play his former team, , using a familiar tune. At practice on Tuesday, the Rebels can be seen conducting practice with “Rocky Top” blaring in the background. Kiffin did the same thing over the summer, and Ole Miss reporter Brad Logan shared...
TENNESSEE STATE・13 DAYS AGO
Oxford Eagle

Lane Kiffin set for return to Knoxville as No. 13 Ole Miss travels to Tennessee

Yes, Lane Kiffin once was the head football coach at Tennessee. No, him returning to Knoxville this weekend is not a major event in his eyes. Kiffin’s tenure at Tennessee concluded on the night of Jan. 12, 2010 when he announced his resignation as head coach of the Volunteers to accept the same position at the University of Southern California. Kiffin’s time in Knoxville was just over 13 months, but it was his departure that was most memorable.
TENNESSEE STATE・13 DAYS AGO