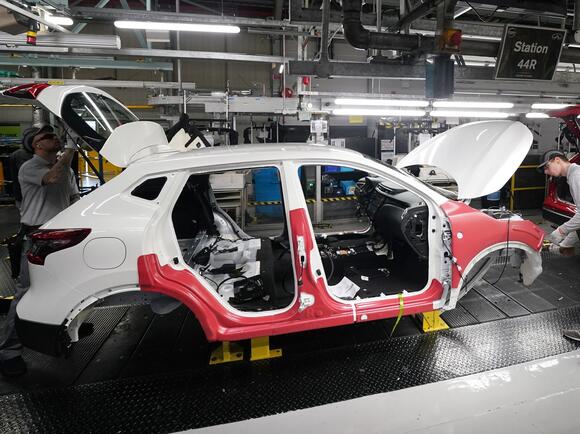 The new projection is nearly double AlixPartners' previous forecast in May, which estimated that automakers would lose $110 billion in revenue in 2021, the firm said in a press release.

The firm said that there could be 7.7 million fewer vehicles made this year, almost double its previous estimate in May of 3.9 million.

The new forecast comes as automakers and commercial truck manufacturers warned that semiconductor shortages and commodity price spikes have persisted, rather than eased, as the year comes to an end.

US dealer lots have about 20 days' supply of vehicles, less than half the normal levels, which has led to sluggish sales, Dan Hearsch, a managing director in Alixpartners auto practice, told Reuters.

"We had originally assumed we would get back to normal and claw back volume" in the fourth quarter, Hearsch told Reuters . "That is not going to happen."

Automakers could have tight inventories until late 2022 or early 2023, he added.

Semiconductor shortages are just part of the problem: Tight supplies of materials such as steel and plastic resin are driving up costs. Backlogs at major US ports are hampering auto manufacturers' efforts to import more of the materials, Hearsch told Reuters.

In response, automakers are committing to longer contracts to lock in supplies, buying as much as 40 to 50 weeks in advance, Hearsch said.

"They are signing up for things they would never have done a year ago," he told Reuters.

On Nov. 1, no GM plants will be closed due to chip shortage

The owner of a dog-walking company in Atlanta, Georgia, said she got, on average, four new enquiries a day, "and we have to turn all of them away."
SMALL BUSINESS・5 HOURS AGO
Business Insider

The following post was written and/or published as a collaboration between Benzinga’s in-house sponsored content team and a financial partner of Benzinga. The good news for oil investors is that the price of a barrel of oil has stabilized around the $35-$40 area, a far cry from the brief foray into negative territory in April.
ENERGY INDUSTRY・23 HOURS AGO
CarBuzz.com

Following a dismal 2020 when the world was locked in due to a global pandemic, the automotive industry continues to suffer through a semiconductor chip shortage in 2021, which Mercedes-Benz thinks will only be resolved in 2023. Bad things tend to happen in threes, which means something else might be on the way.
ECONOMY・2 DAYS AGO

Why Tesla Is Always Rushing to Make End-of-Quarter Deliveries

In the final week of Q3 2021, Tesla (NASDAQ:TSLA) CEO Elon Musk claimed it would be the "most intense delivery week ever" for the company. In a Motley Fool Live segment recorded on Sept. 28, Motley Fool contributor John Bromels explains to Motley Fool contributor Toby Bordelon why Tesla is always rushing to fulfill its end-of-quarter deliveries.
ECONOMY・1 DAY AGO
Business Insider

Why Tesla Is Potentially Disruptive For Legacy Players (A $15,000 EV Is One Of The Reasons)

Tesla, Inc. (NASDAQ:TSLA) reported Wednesday forecast-beating quarterly results, and an analyst at Morgan Stanley thinks the quarter is bearish for legacy automakers. The Tesla Analyst: Adam Jonas has an Overweight rating and $900 price target for Tesla shares. The Tesla Thesis: Tesla is the most valuable and highest margin major...
ECONOMY・1 DAY AGO
Business Insider

Tesla hiked the price on two models by $5000, weeks after price increases on its most popular vehicles

The large service sector of the U.S. economy sped up in October after hitting a bump caused by the coronavirus delta variant a month earlier and manufacturers also expanded activity rapidly, but ongoing labor shortages and supply bottlenecks acted as a drag on growth.
SCHAUMBURG, IL・1 DAY AGO

With propane prices almost doubling this year and supplies so scarce, the market prepares for a possible "Armageddon" heading into the winter months.
ENERGY INDUSTRY・3 DAYS AGO
Reuters

DETROIT, Oct 22 (Reuters) - General Motors Co is more than halfway through shipping newly assembly pickups that it had then parked due to a shortage of semiconductor chips that prevented the No. 1 U.S. automaker from shipping the trucks, a top executive said on Friday. “We’ve made great progress,”...
BUSINESS・2 DAYS AGO
Seattle Times

Why the supply chain is in crisis, spurring an 'everything shortage'

Americans seem to be facing shortages at every turn. Here's everything you need to know about what's causing the supply-chain crisis.
RETAIL・2 DAYS AGO
techgig.com

Intel CEO predicts when will the global chip shortage end

A shortage of semiconductors has sent shockwaves through the global economy, squeezing supplies of everything from cars to headphones. The ongoing global chip shortage is going to be a problem for a lot longer, according to. Intel. CEO. Pat Gelsinger. . Crisis to stay till 2023. “We’re in the worst...
TECHNOLOGY・2 DAYS AGO
gizmochina.com

Global chip shortage could continue until 2023 according to Intel CEO

Intel CEO Pat Gelsinger warned that the global chip shortage will likely linger for a lot longer. He said that he expects the shortage to extend at least until 2023. The statement was made to CNBC late on Thursday ahead of Intel’s third-quarter 2021 financial results. The CEO also revealed that the industry-wide component shortage affected its PC chip business during the third quarter which led to an 8% drop in Intel’s stocks.
TECHNOLOGY・2 DAYS AGO
MarketWatch

GlobalFoundries IPO: 5 things to know about the chip company going public in a semiconductor shortage

GlobalFoundries Inc. is billing itself as the largest silicon wafer supplier not dependent upon China and Taiwan in an initial public offering planned during a global semiconductor shortage, but that doesn't mean the business will be U.S.-controlled --- nor profitable.
BUSINESS・2 DAYS AGO
Markets Insider

Jones, the founder and chief investment officer of Tudor Investment Corporation, told CNBC he has crypto in single digits in his portfolio.
ECONOMY・4 DAYS AGO
theiet.org

Global 5G roll-out could be hampered by chip shortage

Connections to 5G networks worldwide remain on track to triple this year to 637 million, but continuing microchip shortages could dampen progress in the coming months, according to analyst firm CCS Insight. Telecom operators in Western Europe, North America, China and other advanced markets in Asia have continued to roll...
CELL PHONES・3 DAYS AGO
theiet.org

The ongoing global semiconductor shortage has forced the first-ever price rise for the Raspberry Pi computer, whilst also obliging automakers to scale back production of high-tech vehicles. The 2GB Raspberry Pi 4 will be increased in price from $35 to $45, having previously been reduced from $45 to $35 when...
COMPUTERS・3 DAYS AGO
techxplore.com

An California semiconductor company took its stock public Wednesday—straight into the maw of a global chip shortage that could pose either a threat or an opportunity. The company is Navitas, based in El Segundo. Its stock offering created a company with an enterprise value of about $1 billion and brought in $320 million in cash. Navitas will use the cash to expand its core business—selling chips made of gallium nitride to makers of phone and laptop chargers—and move into new markets.
CALIFORNIA STATE・3 DAYS AGO
gobankingrates.com

Tesla reported its third-quarter earnings yesterday, exceeding analysts’ expectations and despite global supply chain issues. The company reported earnings per share of $1.86 and revenue of $13.76 billion — rising 56.8% — according to a letter to shareholders, compared to analysts’ consensus estimates of EPS of $1.61, according to CFRA Research.
ECONOMY・3 DAYS AGO