By Carl Markham
The Independent
28 days ago Liverpool have “moved the conversation forward” when it comes to addressing homophobia in football, according to the man tasked with improving inclusivity at Anfield.

Rishi Jain, senior manager of equality, diversity and inclusion, admits there is no quick fix to problems of homophobia and racism in football. He believes, however, that the club have already made significant strides on the former with the help of manager Jurgen Klopp .

Twice within a fortnight in August, Reds fans were condemned by the club for alleged homophobic chants directed firstly at Norwich’s on-loan Chelsea midfielder Billy Gilmour and then during the home game with Thomas Tuchel’s European champions.

The offensive song has had regular airings in meetings with the Stamford Bridge side over the years, but this season Liverpool have moved to try to put a stop to it.

In an interview with Paul Amann, the founder of Liverpool’s LGBT + supporters group Kop Outs – which is backed by the club – Klopp urged fans not to sing the song again, saying: “It’s from no perspective the nicest song in the world, so it’s not necessary.”

Jain believes that interview and the support of players like club captain Jordan Henderson have elevated awareness of the problem to a new level.

“It is a wider problem, but are we going to shy away from it? No,” he told the PA news agency.

“This club has done a massive amount of work to address issues of homophobic chanting.

“The example of the Chelsea chant and the piece with Jurgen we have moved that conversation forward decades probably.

“And we will keep on doing that. It is not just: ‘Right, we’ve ticked a box, see you later.’ It is about how we continue to have that conversation and educate people in the right way and move the dial forward.”

Despite the work being done across the board by clubs, the Football Association and the Premier League there are currently no openly gay footballers in England’s top four divisions.

Earlier this month, former England and Manchester United defender Rio Ferdinand told a Parliamentary committee of MPs that a gay footballer was advised against publicly coming out by a lawyer over fears of the effect the media scrutiny would have on his mental health. 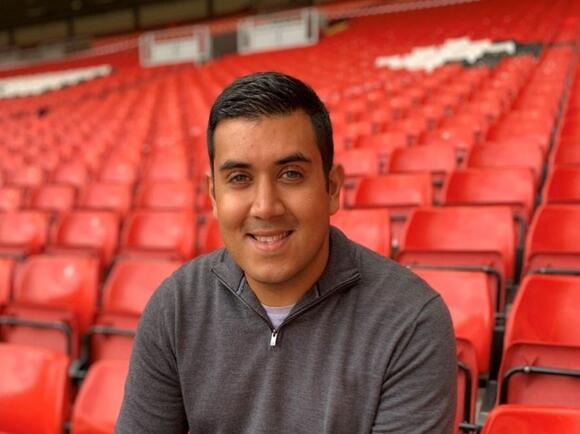 Jain, however, hopes the day is getting closer when it will no longer be an issue.

“I don’t feel like we are a million miles away from that now,” he added. “The work LGBGT+ supporters’ groups have done, work the football authorities have done, Stonewall and other charities in the space we are moving forward.

“I do think we will get there but that’s not the ultimate goal. For me it is having a football stadium, having an industry, our national sport, where you can be whoever you want without fear of discrimination.

“Their reasons to come out or not is personal to them. All we could ever promise is if anyone from our club or any player we are associated with chose to make that decision we would back them to the hilt.

“There are not many other industries you would need to come out and declare your sexuality, so why should you have to?

“But at the same time when that does happen we will be standing side-by-side with any player, showing support for them.

“When that happens it will be a landmark moment for the game but it will immediately become history. It should just become part and parcel.”

"Manchester United remain a team of individuals rather than a team. Cristiano Ronaldo has added to that rather than fixed it," said Jamie Carragher.
PREMIER LEAGUE・2 DAYS AGO
LFCTransferRoom

They may not be currently top of the league but Liverpool have had a fantastic start to the season despite not being very active in the transfer market. Although this is positive, the Reds are already beginning to suffer somewhat of a small injury crisis with integral players such as Thiago and Trent Alexander-Arnold missing games.
LIVERPOOL, NY・14 DAYS AGO
Yardbarker

With Steve Bruce looking likely to be moved aside, the new owners will be looking for a manager to start their adventure with. Since joining Rangers, the former Liverpool captain has done everything and more to replace Celtic at the top. Gerrard has not just done well in the league either. His cup and European runs have impressed the media and football fans.
PREMIER LEAGUE・6 DAYS AGO
LFCTransferRoom

Liverpool Amongst European Clubs Circling For Serie A Striker

There was a lot of concern around Liverpool in the summer when they didn't bring a new striker into the club during the transfer window. Whilst Mohamed Salah continued to score goals at his usual prolific rate, both Sadio Mane and Roberto Firmino suffered a loss of form during the 2020/21 season.
PREMIER LEAGUE・14 DAYS AGO

Liverpool management is delighted with the progress of 18 year-old striker Max Woltman. Woltman, who has been at the Academy since the age of seven, signed his first professional contract with the Reds in January after making considerable strides at youth level. "Max has done really well," Liverpool U18s boss...
PREMIER LEAGUE・11 DAYS AGO
SkySports

Liverpool manager Jurgen Klopp says Newcastle United are a new footballing "superpower" following their £305m Saudi Arabian-backed takeover. Newcastle have become one of the richest clubs in the world after the Premier League approved the takeover, which sees the Public Investment Fund provide 80 per cent of the funds for the deal, earlier this month.
PREMIER LEAGUE・6 DAYS AGO
BBC

As Sadio Mane reaches 100 Premier League goals, BBC Sport looks back at some of his best goals and the key stats of how the Liverpool forward reached the landmark. Watch Match of the Day on Saturday, 16 October at 22:30 BST on BBC One, BBC iPlayer and the BBC Sport website and app.
PREMIER LEAGUE・5 DAYS AGO
goal.com

The former Citizens midfielder was stunned to see the Catalan coach name a line-up for the showpiece game without a holding midfielder. Former Manchester City star Dietmar Hamann says Pep Guardiola has to shoulder a large portion of blame for the club’s Champions League final defeat to Chelsea. Man City,...
PREMIER LEAGUE・7 DAYS AGO

Jurgen Klopp was full of praise and admiration for his Liverpool team after the emphatic 5-0 win over Watford. After watching his side demolish Watford at Vicarage Road, Jurgen Klopp was overjoyed with his players, especially Mo Salah. Without Brazil's Fabinho and Alisson along with Thiago and Jones, Klopp had...
PREMIER LEAGUE・5 DAYS AGO
bjpenndotcom

Paddy Pimblett says “they treated us like criminals” after getting booted from Liverpool vs. Watford football match

UFC lightweight Paddy Pimblett says “they treated us like criminals” after getting booted from the Liverpool vs. Watford football match. Pimblett said that he was kicked out of Liverpool’s 5-0 win over Watford on Saturday in a video that he shared on social media. Not long after he added some extra context in a Twitter message. According to Pimblett, he was booted due to cheering his own team.
UFC・4 DAYS AGO
SkySports

Liverpool manager Jurgen Klopp says, on current form, Mohamed Salah is the best player in the world after the Egyptian shone in Saturday's 5-0 win over Watford. After scoring one of the most memorable goals of recent years in the draw with Manchester City two weeks ago, Salah was at it again at Vicarage Road, scoring a breathtaking effort and setting up two other goals in the 5-0 win over Watford.
PREMIER LEAGUE・5 DAYS AGO
CBS Sports

The UEFA Champions League returned on Tuesday this week with eight Matchday 3 games and Wednesday has another eight matches. There are plenty of enticing showdowns as always, with Manchester United vs. Atalanta, leading the way as Barcelona and Chelsea are also in action. Following this week's games, the 32 remaining teams will be at the halfway point of the group stage with just nine more points up for grabs ahead of the knockout stage.
UEFA・2 DAYS AGO

Soccer-Liverpool will make things difficult for us, says Atletico’s Simeone

MADRID (Reuters) -Atletico Madrid manager Diego Simeone said his team expect a tough challenge in Tuesday’s Champions League Group B game at home to Liverpool and praised the Premier League team for their style of play. Atletico have won three of their last four games against Liverpool, including a 3-2...
PREMIER LEAGUE・3 DAYS AGO
The Independent

Is Atletico Madrid vs Liverpool on TV tonight? Kick-off time, channel and how to watch Champions League fixture

Liverpool will attempt to take a significant step towards the Champions League knockout stages when they take on Atletico Madrid on Tuesday evening. Jurgen Klopp’s side have enjoyed a terrific start to the season, with Liverpool top of Group B and unbeaten in the Premier League. Last time out in Europe, Mohamed Salah led Liverpool’s comprehensive thrashing of Porto and it was the Egyptian who starred once again in a 5-0 victory over Watford at the weekend. Follow Atletico vs Liverpool LIVELa Liga champions Atletico will provide a far trickier test, though, and sit just two points back in...
PREMIER LEAGUE・2 DAYS AGO
LFCTransferRoom

Liverpool beat Atletico Madrid 3-2 on Tuesday evening in another enthralling UEFA Champions League contest. Diego Simeone ran off at full time without the cursory handshake with his opposite number Jurgen Klopp in a poor show of sportsmanship. It's not the first time that the two manager's have had issues...
PREMIER LEAGUE・2 DAYS AGO
The Guardian

Liverpool Continues to Play as Advertised—for Better or Worse

Liverpool's attack was still firing vs. Atlético Madrid, but its inconsistency elsewhere is leaving plenty to be desired in its quest to lift trophies once again.
PREMIER LEAGUE・2 DAYS AGO
fourfourtwo.com

For some, the Champions League is the yardstick for how good you are as a footballer. Doing it across 38 matches is one thing - but try doing it under the lights against the best in Europe. Plenty of tried, too. Champions League masterclasses are reserved for only the finest...
UEFA・2 DAYS AGO
Yardbarker

Watch: Liverpool stars confront the difficult topics of diversity and racism head on

With football players up and down the country continuing to take the knee, the issue of racism in football is clearly still a hot-potato topic. It’s vital that discussion and debate surrounding it, and the issue of diversity, also continues to be placed front and centre. Until such time as...
SOCCER・12 DAYS AGO
firstsportz.com

Newcastle United have started a new phase in their journey after the club changed ownership in a massive deal which has now seen the Magpies become the richest club in the world. A Saudi-led consortium having Prince Mohammed bin Salman at the helm has bought 80 percent of the club from previous English owner, Mike Ashley after a year of much deliberation and controversy.
PREMIER LEAGUE・13 DAYS AGO