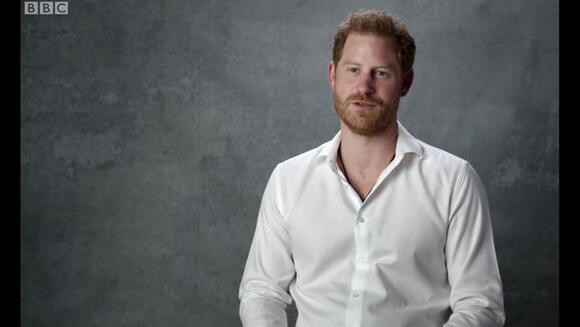 The Duke of Sussex has honoured the work of his grandparents, the Queen and the late Duke of Edinburgh, in a new documentary.

In BBC One’s Prince Philip: The Family Remembers , a documentary filmed earlier this year originally intended to mark Prince Philip’s 100th birthday, Prince Harry shed light on the relationship between the monarch and his grandfather.

“From my grandmother ’s perspective, to have someone like that on your shoulder for 73 years of marriage it doesn’t get better than that,” he said.

“The two of them together were just the most adorable couple. I don’t know if anyone has ever described them as ‘adorable’.

“But for me knowing the cheekiness of him, and that behind what the world sees you have two individuals who were very much in love and both at a very young age dedicated their life to service.”

The 37-year-old added: “The things that they saw and places they travelled and experiences they went through - that is an incredible bond between two people.”

Speaking specifically about Philip, he described his grandfather as “unapologetically him at all times”.

“What you see is what you got with my grandfather and that’s what I loved more than anything else,” he added.

Prince Harry went on to explain how reaching the age of 100 was not all that important to Prince Philip.

The Duke of Sussex concluded his segment in the documentary by explaining the things he misses about Prince Philip.

“More than anything I miss his humour but I miss him more for my grandmother because I know how incredibly strong she was with him there,” he said. “I also know she’s going to be ok without him.”

Prince Harry and Meghan Markle welcomed their daughter, Lilibet Diana, back in June. Over the past few months, many have wondered when the baby will be christened — and where. There have been all kinds of rumors about what the Duke and Duchess of Sussex are planning to do when it comes to christening their little one. In July, a source told the Daily Mail that Harry really wanted to have Lili christened at Windsor like her older brother, Archie. In the weeks that followed, speculation that Lili would end up being christened in California grew. There was even a report that Harry's brother, Prince William, didn't want Lili christened in the UK, which would have undoubtedly caused even more of a rift between the royal family and the duke and duchess, according to Express.
CELEBRITIES・8 DAYS AGO
Cosmopolitan

Prince Harry and Meghan Markle's tour of New York has been quite the whirlwind, with the couple making appearances at the likes of large-scale events, such as Global Citizen Live, to more intimate settings like a school in Harlem, where the Duchess of Sussex dropped in to read her best-selling book, The Bench.
WORLD・27 DAYS AGO
nickiswift.com

In August 1997, the world came to a screeching halt following Princess Diana's tragic and untimely death. Diana, who was widely revered by the public, was known for her undeniable beauty and charming personality — but beyond the surface, what really put her over with the public was her enduring charity work. According to TIME, Diana was, at one point, linked to more than 100 charities and even risked her life by visiting Angolan minefields to help de-mine the African country.
CELEBRITIES・15 DAYS AGO
Daily Beast

Now that it has been revealed—24 hours after the event—that Queen Elizabeth II has spent a night in hospital and was not, as the palace press corps were informed, “resting” at Windsor Castle, there are complaints that, once again, the messaging is bad and making the situation worse. For sure,...
CELEBRITIES・1 DAY AGO

Prince Harry and Prince William's shared experience of Princess Diana's death will bring them back together, their mother's biographer told Newsweek.
CELEBRITIES・12 DAYS AGO
Cosmopolitan

We all know just how passionate Prince William is when it comes to climate change and protecting the environment. And as it turns out, his eldest son, Prince George, is already following in his footsteps. How sweet!. Speaking on BBC's Newscast series, the Duke of Cambridge revealed that Prince George...
CELEBRITIES・9 DAYS AGO
nickiswift.com

Which Divorced Couple Does Queen Elizabeth Have A Photo Of In Her Home?

If there's one thing fans love when it comes to the royals, it's getting a sneaky peek inside their palaces. Queen Elizabeth II has given fans a look inside her royal residences on multiple occasions, even showing off personal items such as irreplaceable royal artefacts and personal photos of her famous family.
RELATIONSHIPS・10 DAYS AGO
Cosmopolitan

It only feels like two minutes since Meghan Markle and Prince Harry's daughter Lilibet 'Lili' Diana Mountbatten-Windsor was born, but already - it seems - thoughts are starting to turn to the little one's christening. While no firm details have been released by the Sussex family just yet, The Telegraph...
WORLD・10 DAYS AGO

Prince William, Not Prince Charles, Is the 'New Leader' of the Monarchy—Royal Author

Prince William is "under pressure" after a year in which the royal family was gripped by crisis—but the monarchy has survived worse, according to a historian.
U.K.・24 DAYS AGO
Fox News

Snoop Dogg says Prince Harry, Prince William ‘are my boys’ after learning the royals were fans

Snoop Dogg has friends in high places. The American rapper revealed that he is pals with Prince William and Prince Harry after he learned the royals were fans. "Harry and William are my boys," the 49-year-old recently told U.K.’s Mirror. "As soon as I knew they were fans I reached out to them and we’ve been cool ever since. I look out for them and they can reach out to me whenever they want – they know that."
CELEBRITIES・19 DAYS AGO
goodhousekeeping.com

Prince William and Kate Middleton Are Coming to America

The Cambridges are making the trip across the pond come 2022. In a new interview with People, Prince William revealed that his environmental initiative, The Earthshot Prize, will be making its way to America for its second annual awards ceremony next year. The Duke of Cambridge kicked off the sustainability competition last weekend, bringing together experts to conceptualize concrete plans to tackle our world's most pressing environmental matters.
WORLD・2 DAYS AGO
SheKnows

Despite the hopefulness of the timeless proverb “absence makes the heart grow fonder,” Prince Harry and Prince William’s brotherly bond still seems to be at a standstill. The two royals don’t appear to have worked on mending their relationship quite yet, despite optimistic reports to the contrary. And a recent report that Prince Harry is not going to attend a tribute to the brothers’ late mother, Princess Diana, might indicate that the rift is deeper than it was just a few months ago. This week, Kensington Palace and Prince William will host donors and VIP attendees who helped fund Princess Diana’s...
CELEBRITIES・13 DAYS AGO

On Thursday, Her Majesty The Queen was accompanied by her son the Prince of Wales and her daughter-in-law the Duchess of Cornwall, at the Opening Ceremony of the Sixth Session of the Senedd in Cardiff. The Queen wore a Stewart Parvin outfit which consisted of a rose cashmere double breasted...
CELEBRITIES・10 DAYS AGO
fox40jackson.com

For Andrew Morton, there’s no doubt in his mind that Prince William contributed to Prince Harry and Meghan Markle’s exit from the royal family. In 2018, Princess Diana’s biographer wrote a book on the Duchess of Sussex titled “Meghan: A Hollywood Princess,” which explored the former “Suits” star’s rise to stardom and whirlwind marriage to Harry, 37. On Tuesday, the British author re-released his book, titling it “Meghan and the Unmasking of the Monarchy.”
CELEBRITIES・5 DAYS AGO
nickiswift.com

Queen Elizabeth was forced to cancel a trip to Northern Ireland the week of October 18 after her doctors advised her to rest for a "few days," according to NBC News. Buckingham Palace has not been forthcoming with information about the queen's health, but maintains that she is in "good spirits," despite taking some time off. On October 20, the queen was taken to the hospital to undergo some tests. "Following medical advice to rest for a few days, the Queen attended hospital on Wednesday afternoon for some preliminary investigations, returning to Windsor Castle at lunchtime today, and remains in good spirits," the palace said in a statement, according to BBC News. The report indicates that the queen traveled to King Edward VII's Hospital by car "where she was seen by specialists." Further details about her health were not made available.
CELEBRITIES・2 DAYS AGO
Us Weekly

Sitting this one out. Prince Harry and Meghan Markle will not be traveling overseas for an event set to honor Princess Diana later this month, Us Weekly can confirm. The party, hosted by Prince William, was originally set for July when both brothers attended a statue unveiling that paid tribute to their mother. A source tells Us that the Duke and Duchess of Sussex “will not be in attendance” at the private get-together, celebrating donors who helped fund the statue and close friends and family of Diana, including Elton John.
CELEBRITIES・13 DAYS AGO
romper.com

Prince William’s recent television appearance had at least one member of his family tuning in. His perpetually proud grandmother Queen Elizabeth watched her grandson “on the telly,” and it was a sweet reminder that he isn’t simply her heir to the throne — he’s a beloved grandson out in the world doing good work.
CELEBRITIES・4 DAYS AGO
People

The songstress was the latest celebrity to take on Vogue's 73 Questions challenge while sharing a peek of her Los Angeles home. As she headed inside, Adele was asked to participate in a British-themed round of "This or That." After choosing Blur over Oasis and Liam Gallagher over his brother...
LOS ANGELES, CA・2 DAYS AGO
epicstream.com

Kdrama & Kpop Editor Jastine has a degree in journalism and took classes in international law and business communication. Prince George is, without a doubt, being raised like a normal kid. As a matter of fact, not only is he obsessed with playing soccer as he also loves hunting for insects in the garden with Princess Charlotte and Prince Louis.
WORLD・13 DAYS AGO
Woman's World

Is Prince William Planning a Reunion with Prince Harry and Meghan Markle?

Prince William has sparked rumors of a reunion between him and Prince Harry next year! On Sunday, the future king attended the inaugural Earthshot Prize Awards with wife Kate Middleton where they handed out the first prizes for William’s landmark project. During the event, which saw finalists and winners present...
CELEBRITIES・6 DAYS AGO