By Sarah Rendell
The Independent
29 days ago 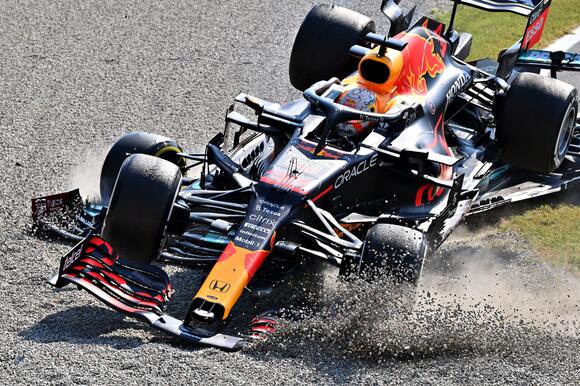 Sebastian Vettel has poured cold water on claims Lewis Hamilton and Max Verstappen will crash again as the title race starts to heat up.

The rivals have crashed twice this season, at Silverstone and Monza, and with eight races left of the season the Dutchman holds a five point lead over the British star .

“I don’t think any of us has the intention to crash going into a gap or going for a move,” he told Sky Sports . “Obviously, as it turns out when things go wrong, there is someone to blame or sometimes there is not - it is normal.

“It is then for the stewards and the people to decide if there was somebody to blame which I don’t think is always an easy call because every situation is different. As long as you are not involved, it is not that important.”

The pair will go head to head again at the Russian Grand Prix on 26 September but Verstappen has a three-place grid penalty at the race due to his involvement in their crash at Monza.

And while Vettel has assured another crash won’t happen, tempers may flare as another driver has said Verstappen holds anger towards his rival due to their collision at Silverstone.

Daniel Ricciardo, the 2021 Italian Grand Prix winner, told the Pardon My Take podcast: “I guess he still maybe was carrying a bit of anger or a little bit of frustration from Silverstone.

“Maybe that’s why he just said ‘stuff this’ and walked away. I saw him go over his head but then stopped a bit more forward.

“I think there were things where Lewis was trying to reverse and get out, look I’ve probably already got too involved but maybe Max saw that and thought, ‘okay Lewis is fine,’ but I don’t know.”

Hamilton will take a 10-place grid penalty for Sunday's race after Mercedes opted to fit a new engine (ICE) to better serve him in his championship fight against Verstappen over the last seven rounds of the season. But as that news filtered in off the track, Hamilton was dominating on...
MOTORSPORTS・14 DAYS AGO
Outsider.com

It’s all settled. Daniel Ricciardo will get to drive the 1984 Wrangler Chevrolet Monte Carlo of NASCAR legend Dale Earnhardt Sr. For those who might be wondering at home, Daniel Ricciardo is an Italian-Australian driver who currently competes for McLaren in Formula One. He made his debut back at the 2011 British Grand Prix. And since then he’s won eight Grand Prix victories in Formula One. He won his first race as a driver for McLaren at the 2021 Italian Grand Prix and in doing so he also won a bet with his boss.
MOTORSPORTS・7 DAYS AGO
The Independent

Mercedes team principal Tofo Wolff has admitted that Lewis Hamilton could face a second engine penalty this season, in what would be a major blow to the defending champion’s chances in his Formula 1 title race with Max Verstappen.Hamilton served a 10-place grid penalty at last weekend’s Turkish Grand Prix after he was forced to use his fourth engine this season – one more than the permitted number.The Briton was fastest in qualifying but had to start from 11th on the grid in Istanbul, ultimately finishing fifth after climbing as high as third.Meanwhile, title rival Max Verstappen came second...
MOTORSPORTS・9 DAYS AGO
The Independent

How does Formula 1 move cars between races?

It’s one of the biggest logistical challenges in sport, but how do Formula 1 teams move hundreds of tons of equipment across the world, from week to week? While it’s the two-hour race on the Sunday that grabs the attention, the business of moving cars, vital parts and personnel around the globe is a full-time, non-stop operation. And it’s a challenge that ultimately sustains the title challenges of drivers such as Lewis Hamilton, Max Verstappen and the rest of the F1 grid, who will arrive at the track location on the Thursday of race week to find that the paddock...
MOTORSPORTS・1 DAY AGO

Jos Verstappen Hits Out at Lewis Hamilton: “Threatened by My Son”

Max Verstappen attempt to end Mercedes and Lewis Hamilton tenure in the turbo hybrid era has been handed a boost as Lewis Hamilton has taken a 10-grid penalty. With just 2 points separating the two, the Turkish GP could hand Max Verstappen by lead by more than 5 points (as of writing per the current scenario). However Max Verstappen’s father Jos Verstappen has fired shots at the seven-time world champion.
MOTORSPORTS・12 DAYS AGO
SkySports

Bottas led almost every lap of a gripping race in difficult conditions and sealed his first win of the season with an overtake on Charles Leclerc, before finishing comfortably ahead of Verstappen at the chequered flag. "From my side, it was one of the best races I've had, ever," said...
MOTORSPORTS・12 DAYS AGO
The Independent

A furious Lewis Hamilton surrendered the world championship lead to Max Verstappen after finishing fifth at the Turkish Grand Prix.Valtteri Bottas took the chequered flag at a damp Istanbul Park ahead of Verstappen and Sergio Perez with Ferrari’s Charles Leclerc fourth.But Hamilton, who started only 11th after an engine penalty, pointed the finger at his Mercedes team for putting him on to new tyres in the closing stages.Hamilton was on course to finish third with the same rubber he started the race on, before Mercedes’ safety-first approach.Hamilton questioned the decision to stop and snapped “leave me alone” when race...
MOTORSPORTS・12 DAYS AGO
SkySports

The championship contenders had contrasting Fridays for different reasons in Istanbul - Hamilton started the day with confirmation of a new Mercedes engine and a 10-place penalty but went on to secure back-to-back fastest practice times, and Verstappen, although boosted by his rival's grid drop, simply wasn't comfortable, or quick, on track.
MOTORSPORTS・14 DAYS AGO

Yuki Tsunoda is one of the four Honda drivers present in the 2021 Formula 1 grid. Havign already been looked upon by the major official at Red Bull, Tsunoda has been under raider of both Horner and Marko. However, during the Turkish GP, when Lewis Hamilton had to start from P11, it was AlphaTauri’s Yuki Tsunoda was managed to keep the reigning world champion at bay for 8 laps.
MOTORSPORTS・11 DAYS AGO
internetshots.com

Lewis Hamilton and Mercedes workforce principal Toto Wolff have disagreed over a disastrous late pit cease that allowed Max Verstappen to extend his championship lead. Hamilton was certainly one of quite a few drivers who tried to complete the race with out stopping for contemporary tyres, because the damp Istanbul Park circuit ripped aside the intermediate rubber.
MOTORSPORTS・11 DAYS AGO
Motor1.com

F1 driver Sebastian Vettel has a unique opinion about Germany’s lack of speed limits on the famous autobahn. You’d expect an F1 driver to have a more well-rounded opinion of speed and Vettel’s commentary does not disappoint. Vettel states that a speed limit is a no-brainer if it reduces carbon emissions and makes the roads of Germany a little safer.
MOTORSPORTS・12 DAYS AGO
Telegraph

Lewis Hamilton promised to take a “balanced” approach at Sunday's Turkish Grand Prix, rather than get too gung-ho, as he looks to limit his losses to title rival Max Verstappen. A brilliant performance beneath leaden skies at the Istanbul Park Circuit on Saturday ensured the seven-time world champion qualified fastest...
MOTORSPORTS・13 DAYS AGO

Max Verstappen’s incredible drive at the Russian Grand Prix has made Lewis Hamilton “nervous”, according to former Formula 1 driver Ralf Schumacher.Verstappen started at the back of the grid in Sochi but drove arguably the race of his career to end on the podium. It means he remains in touching distance of title rival Hamilton who is only two points ahead of him with six races to go.“Both are driving at an incredibly high level,” Schumacher said per Motorsport.com. “I think Max Verstappen has taken an incredible step. He is driving much more intelligently. He still takes risks, but not...
MOTORSPORTS・14 DAYS AGO
ClutchPoints

Alpine’s Fernando Alonso gets brutally honest on helping Formula 1 title contender Max Verstappen beat his rival, Lewis Hamilton. Red Bull’s Verstappen currently has a slim lead of six points over Mercedes’ Hamilton with just six races to go. This year’s battle between the two can be considered one of the most intense rivalries in the sport.
MOTORSPORTS・10 DAYS AGO
Daily Mail

Lewis Hamilton could face another grid penalty this season due to reliability concerns over the Mercedes engine. The seven-time world champion took on a new Internal Combustion Engine (ICE) at the Turkish Grand Prix which cost him pole position, as he was relegated to 11th on the grid after setting the fastest time in qualifying.
MOTORSPORTS・9 DAYS AGO
The Independent

As the floor of Max Verstappen’s Red Bull perched itself along the halo of Lewis Hamilton’s Mercedes car at Monza three Formula One races ago, another tantalising opportunity to watch two of the fastest men to ever compete in the top tier of motorsport was lost.Verstappen saw Hamilton exiting the pit lane in Italy and decided that, by hook or by crook, Hamilton was not leaving the Prima Variante chicane ahead of him. The two came together as they attempted to round the first turn, and the Dutchman’s RB16 was launched up off the sausage kerb and onto the top...
MOTORSPORTS・11 DAYS AGO
The Independent

Max Verstappen has said Red Bull teammate Sergio Perez should be rewarded with tequila for holding off Lewis Hamilton at the Turkish Grand Prix.Verstappen finished second in Istanbul as title rival Hamilton came fifth after starting 11th on the grid, while Perez crossed the line third. Hamilton’s Mercedes teammate Valtteri Bottas claimed his first win of the season, meanwhile.As a result of those finishes, Verstappen erased Hamilton’s two-point lead at the top of the Formula One drivers’ standings, and the 24-year-old is now six points clear of the seven-time champion with six races left this season.As Sky F1 interviewed Verstappen...
MOTORSPORTS・11 DAYS AGO
The Independent

Lewis Hamilton admits he is “incredibly proud” of his relationship with Sebastien Vettel and has hinted at a future partnership with the German.The defending Formula 1 world champion is delighted at the four-time world champion’s work to campaign for social and environmental change.The Aston Martin driver has thrown his weight behind the LGBTQ+ community, while also discussing climate change.Moreover, the German driver’s helmet encourages sustainable water sourcing, with Hamilton praising his efforts.“I’ve been incredibly proud of Sebastian for doing him,” Hamilton said, according to Autosport, with Vettel also seen at Silverstone picking up litter.“He has discovered things that he is...
MOTORSPORTS・2 DAYS AGO
firstsportz.com

Lewis Hamilton is Better than Michael Schumacher; Max Verstappen Will be Even Better: Johnny Herbert

It seemed impossible at one stage to even imagine any race driver to even match up to Michael Schumacher’s record of seven world titles. Yet now it is a reality, courtesy to Lewis Hamilton’s glorifying stint in the sport. However the 24-years-old Dutchman, Max Verstappen has taken the seven-time Brit world champion with surprise and has rightfully challenged him for 2021 title. Which has left former F1 driver Johnny Herbert praising him for all the right reasons.
MOTORSPORTS・6 DAYS AGO