David Cassidy was an actor best known for starring in "The Partridge Family." He wasn't the only heartthrob in their house, though, as his younger brother Shaun also stole the hearts of many.

David Cassidy was born in New York City in 1950, rising to fame on the musical TV series "The Partridge Family." He was not the only one to join the entertainment industry, as his brothers followed suit.

When his teenage fanbase started to move on, he started performing in theater. He toured the US and abroad before appearing on "Ruby and the Rockits," a show produced by Shaun and co-starring their brother Patrick in 2009. 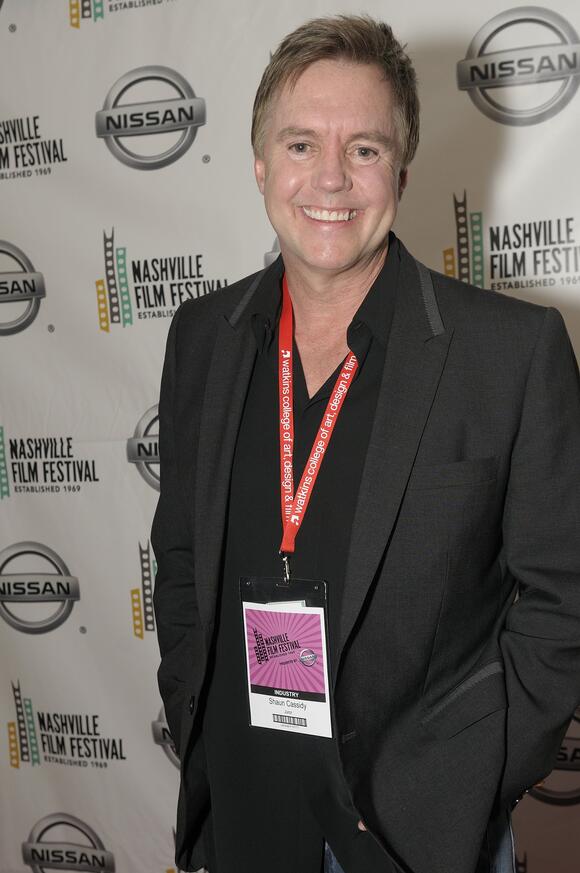 While David got a head start into the industry earlier than Shaun, the latter went on to become a well-loved singer, writer, producer, and actor. He is the eldest son of actress Shirley Jones and Tony Award-winning actor Jack Cassidy. He is the half-brother of David and has two other brothers, Patrick and Ryan.

Shaun was married three times, first to Ann Pennington, before marrying Susan Diol, and finally, staying in a long-lasting marriage to Tracey Lynne Turner. He has a total of seven children from his three marriages.

He is also a writer and renowned producer, known for creating and producing many television series, including "American Gothic," "Roar," and "Invasion." Before becoming a producer, he stole millions of hearts with his pitch-perfect love songs, gorgeous locks, and tight satin pants in the 1970s.

However, even when he started to lay low, fans would still follow him around and ask him for autographs. While in North Carolina, Shaun was once surprised when two women in their 30s handed him pens and paper scraps for him to sign.

Shaun found fame of his own about five years after his half-brother’s popularity began to wane. He played the role of Joe Hardy in the “Hardy Boys” TV show and, like his brother, went into the record-making business.

Though his music career lasted less than a year, he had a considerably large fan base and is still fondly remembered. His first hit came in 1977 from his remake of “Da Do Ron Ron.” The remake was followed promptly by two more major hits with only a few months in between.

RETIRING FROM THE SPOTLIGHT

Later on, Shaun eventually decided to take a step back from the stage before finding fulfillment in producing; he had this to say about that goal of his:

"I look at old interviews and things, and they say, 'What do you want to do when you grow up?' I say, 'I want to be a producer.' And I'm really fortunate that I was able to do it."

In the end, Shaun credits his family for keeping him grounded despite his fame. He acknowledged that acting was second nature in their family, but despite this, they never pressured him unless it was the path he wanted to follow – and it was.

Actor James Michael Tyler who played coffee shop manager Gunther on the hit sitcom "Friends" died Sunday at age 59, US media reported. "The world knew him as Gunther (the seventh 'Friend'), from the hit series Friends, but Michael's loved ones knew him as an actor, musician, cancer-awareness advocate, and loving husband," representative Toni Benson said in a statement to US media.
LOS ANGELES, CA・1 DAY AGO
WJW FOX 8 News Cleveland

(WJW) — Child actor Matthew Mindler committed suicide using a product purchased on Amazon, TMZ reports. TMZ reports Mindler’s cause of death was sodium nitrate toxicity. His death was ruled a suicide. Mindler, who was a student at Millersville University in Pennsylvania, was found dead near campus in August. Mindler, a first-year student at Millersville, […]
CELEBRITIES・11 DAYS AGO
International Business Times

Mayim Bialik has finally revealed why she and Neil Patrick Harris are no longer friends, and according to the "Big Bang Theory" star, it has a lot to do with her lack of interest in musicals. The 45-year-old actress confessed that in 1997, she watched "Rent," in which Harris played...
CELEBRITIES・26 DAYS AGO
extratv

Ravil Isyanov, an actor known for a longtime part on "NCIS: Los Angeles," died at his L.A. home on September 29 following "a long illness," Deadline reports. Born in the former Soviet Union on August 20, 1962, Isyanov often played Russian heavies on TV. Isyanov had played Kirkin on the...
LOS ANGELES, CA・12 DAYS AGO

(WJW) – Actor, rapper and comedian Ricarlo Flanagan has died at age 40. Flanagan’s agent confirmed the news to Deadline. His cause of death has not been confirmed. Flanagan recently posted to Twitter about contracting COVID-19. “This covid is no joke. I don’t wish this on anybody,” he wrote. Flanagan had a recurring role on […]
CELEBRITIES・13 DAYS AGO
rollingout.com

It appears that Ray J and Princess Love are serious about ending their marriage this time. Ray J, 40, has listed off his requests to the judge, according to court documents obtained by TMZ. The rapper-turned-reality TV star and businessman wants joint custody of the couple’s two children. Ray also...
RELATIONSHIPS・5 DAYS AGO
Primetimer

Couric, who anchored CBS Evening News from 2006 to 2011, calls out former CBS boss Les Moonves in her book Going There for trying to push her back to mornings after sagging ratings in the evenings. “Absolutely not … I didn’t leave the morning show I helped make number one so I could go to the third-place morning show," Couric wrote, according to the New York Post, adding: “I had come here to accomplish something, and if it didn’t work, it didn’t work. I’d rather leave the network than retreat to the morning show, which at the time was a cheap imitation of the other two.” The Post reports Couric had been scheduled to promote her book with Gayle King on CBS This Morning. That is, until CBS News bosses read Going There.
BOOKS & LITERATURE・21 DAYS AGO
pvtimes.com

It’s uncertain how many locals knew that a legendary and famed singer was a resident of Pahrump for over two decades. Sue Thompson, born Eva Sue McKee, an American pop and country music singer that started her rise to fame in the late 1940s, died on Sept. 23. She was 96.
PAHRUMP, NV・3 DAYS AGO

Vernell Varnado is best known as the father of hugely popular American rapper and hip-hop artist Snoop Dogg. Following the recent passing of his mother, Beverly Tate, fans are curious to know more about Snoop Dogg’s loved ones. Here we get to know Varnado and his wider family. Explore the...
MUSIC・1 DAY AGO
musictimes.com

Snoop Dogg's mother, Beverly Tate has passed away at the age of 70. The rapper recently confirmed the tragic news on his Instagram account by posting a picture of him and Tate with the caption, "Thank u god for giving me an angel, for a mother, TWMA." The "Drop It...
CELEBRITIES・1 DAY AGO
Slipped Disc

A formidable Lulu has died

The American-born soprano Karan Armstrong has died at 79 in Marbella, Spain. Married to the hyperactive German opera director Götz Friedrich she enjoyed many leading roles in modern operas on the Continent and at Covent Garden. She was the first Lulu I ever saw, a dominant stage persona in Friedrich’s 1970s production, albeit lacking the delicate vocal qualities that others brought to the role.
CELEBRITIES・26 DAYS AGO
Daily Mail

The Conners star Sara Gilbert and ex Linda Perry finalized their divorce and custody agreement Friday, nearly two years after ending their six-year marriage. Gilbert, 46, and Perry, 56, agreed to joint legal custody of son Rhodes, six, according to court docs viewed by Us Weekly. Neither Gilbert or Perry...
TROUBLE RELATIONSHIP・6 DAYS AGO

’90 Day Fiance: Happily Ever After?’: The Mystery Of JoJo’s and Angela’s Broken Friendship

Shocking fans everywhere, 90 Day Fiance: Happily Ever After? co-star Jojo shared that she is no longer friends with Angela Deem. After that, Jojo shared a cryptic message on Instagram. That mysterious message got fans talking. JoJo posted how she had “stop[ped] talking to some people.” She posted this with...
TV SERIES・1 DAY AGO
GOBankingRates

Paul Stanley, best known as rhythm guitarist and co-lead vocalist along with Gene Simmons for the rock band Kiss, has a net worth of $200 million, Celebrity Net Worth reported. Rock Celebrities notes...
SMALL BUSINESS・6 DAYS AGO
AceShowbiz

The former member of Destiny's Child and the 'Empire State of Mind' hitmaker come across each other when they attend 'The Harder They Fall' premiere in Los Angeles. AceShowbiz - Kelly Rowland was left baffled after her recent interaction with Jay-Z at "The Harder They Fall" premiere went viral. When addressing the matter, the former Destiny's Child member admitted that she will "never understand" what's the big deal about it.
CELEBRITIES・6 DAYS AGO
TheDailyBeast

Katie Couric Texted Serial Creep Matt Lauer Post-Firing to Say ‘I Am Crushed. I Love You’

In her new memoir, veteran TV anchor Katie Couric said she had conflicted emotions after her Today show co-host Matt Lauer was ousted over bombshell allegations that he preyed upon and sexually harassed young women. According to the Daily Mail, she wrote that despite the “awful things” Lauer had done, her “heart sank” at his firing. She sent supportive text messages when he was fired in 2017, writing that it felt “heartless” to abandon someone she spent so many years sitting beside. “I am crushed. I love you and care about you deeply. I am here. Please let me know if you want to talk. There will be better days ahead,” she wrote. Lauer sent a kissy-face emoji in response. However, Couric admits that she had “heard whispers” from around the studio about Lauer. Still, she insists that he was a “decent” man.
CELEBRITIES・25 DAYS AGO

Bow Wow got good news over the weekend. According to reports, courts declared Stone Moss as Bow’s biological son- which was once in questioning. Last month, during a Q&A on Twitter, it was implied that Bow was denying Stone as his child, allegedly because he didn’t want to pay Stone’s mother any child support.
CELEBRITIES・2 DAYS AGO
Hello Magazine

Bruno Tonioli left his fellow Dancing with the Stars judges and fans at home in stitches after a candid video from the judging panel was posted on social media. The official DWTS Instagram page shared a fun backstage clip showing Carrie Ann Inaba and Len Goodman reacting as Bruno fell off his chair.
CELEBRITIES・16 DAYS AGO
ComicBook

Married with Children actress Katey Sagal was hit by a car while crossing the street in Los Angeles. The incident was reported by TMZ today and an ambulance was on-hand to transport her to the hospital for the injuries. Luckily for Sagal, they don't seem to be life-threatening. But, it is still a scary situation. Reports indicate that she should be released before the weekend is over. The driver in question actually stopped to assist her after the accident. A lot of fans are relieved to hear it wasn't anything series. Married with Children is a beloved show from the 1990s. Sagal has also been huge on Sons of Anarchy as Gemma Teller. She's even made a return to broadcast television with her presence on The Conners over at ABC. So, a wild moment leads to not much more than a bump in the road for a television fan-favorite.
TV & VIDEOS・10 DAYS AGO
The Hollywood Gossip

The contentious mess that has played out on recent episodes of 90 Day Fiance: The Other Way is just part of the story. On social media, Evelin Villegas revealed that she demanded a divorce from Corey Rathgeber, but he refused. Now, after the mess with Jenny from Peru has played...
TV SERIES・17 HOURS AGO