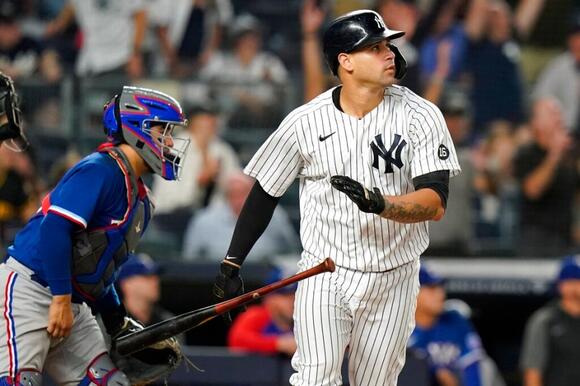 NEW YORK (AP) — Gleyber Torres doubled home Joey Gallo for the tiebreaking run in the eighth inning, Gary Sánchez followed with a two-run homer and the New York Yankees rallied past the Texas Rangers 7-3 to cap a three-game sweep before beginning a season-ending divisional gauntlet that will decide their postseason fate.

That’s followed with three games at Toronto and a season-ending, three-game homestand against Tampa Bay.

New York is half a game ahead of Toronto for the second and final AL wild card.

Braves second baseman Ozzie Albies swiped second base during the first inning of game one of the World Series.
RESTAURANTS・5 HOURS AGO
NJ.com

The 2021 World Series begins on Tuesday with Game 1 between the Houston Astros and Atlanta Braves at Minute Maid Park. Read our comprehensive how to bet on baseball guide. Over the weekend, Major League Baseball released the broadcast schedule for the Fall Classic:. Game 1: ATL @ HOU; Tues.,...
MLB・2 DAYS AGO
NJ.com

The internet never forgets. Former New York Yankees slugger Alex Rodriguez has been covering the 2021 MLB playoffs by resuming his role as a studio analyst for FOX Sports. Last week, Rodriguez was analyzing the American League Division Series between the Boston Red Sox and Tampa Bay Rays with David Ortiz, Frank Thomas and Kevin Burkhardt. The gang was discussing a video clip from Game 1, when the Rays were seen eating popcorn in the dugout during the seventh inning of their 5-0 win.
MLB・14 DAYS AGO
New York Post

Joey Gallo’s girlfriend is happy to have his undivided attention after his season ended on Tuesday night. Following the wild-card game — which ended in a 6-2 Yankees loss to the Red Sox — Claire Danko shared a PDA snap from the past of her with the Yankees outfielder. “I...
MLB・20 DAYS AGO

The New York Yankees face an interesting off-season as general manager Brian Cashman tries to navigate his future team. With a number of players on long-term contracts, is unlikely he’s able to find any trade partners that would give them a bit of financial relief. However, the Bombers added more high-priced players last season at the trade deadline than sent away, which has presented an interesting conversation, especially regarding lefty slugger Joey Gallo.
MLB・10 DAYS AGO
FanSided

It’s going to take a while for us to know who will be in the New York Yankees‘ 2022 Opening Day lineup due to the expiring Collective Bargaining Agreement, which is expected to derail the offseason. The silver lining? General manager Brian Cashman will have more time to see this...
MLB・4 HOURS AGO
NJ.com

Carlos Correa is going to get paid. It’s just a matter of how much the two-time All-Star will be offered. Correa headlines a bumper crop of free-agent shortstops, which also includes the Los Angeles Dodgers’ Corey Seager, Colorado Rockies’ Trevor Story and New York Mets’ Javier Baez. So what will...
MLB・13 DAYS AGO
NJ.com

‘A-Rod sucks!’ Red Sox fans troll ex-Yankees star outside Fenway Park after ALCS Game 3 ... and he loved every minute of it

The New York Yankees aren’t playing in the American League Championship Series. But you wouldn’t know it based on the Boston Red Sox fans Monday at Fenway Park. During Game 3 of the ALCS against the Houston Astros, Red Sox fans repeatedly started “Yankees suck” cheers. Of course, that’s nothing new when it comes to Boston’s long-time rival. The Red Sox, as you may remember, eliminated the Yankees from the playoffs with a 6-2 win in the American League Wild Card Game.
MLB・8 DAYS AGO

Rangers History Today: Evening The Score Against The Yankees in 2010 ALCS

On this date in franchise history, the Texas Rangers won Game 2 of the 2010 American League Championship Series, defeating the New York Yankees, 7-2. The game, played on Oct. 16, 2010, marked the first time the Rangers had defeated the Yankees in a postseason contest since Game 1 of the American League Division Series in 1996.
BASEBALL・10 DAYS AGO
NJ.com

That time ex-Yankees star Alex Rodriguez got cursed out at Fenway Park ... by an 85-year-old grandma

Time now for the latest on the budding bromance between Alex Rodriguez and David Ortiz. The once-mortal enemies have become best buds in retirement as analysts on FOX Sports’ MLB coverage. The former New York Yankees star and ex-Boston Red Sox slugger were in Beantown this week for the American...
MLB・5 DAYS AGO
Larry Brown Sports

To quote a recent GEICO ad, if you cover New York sports, you criticize. It’s what you do. But one New York Yankees slugger thinks that the criticism has gotten a little out of hand. Yankees outfielder Joey Gallo responded this week to a recent article by Bob Klapisch of...
MLB・1 DAY AGO
WFAN Sports Radio

The Los Angeles Dodgers were in a load of trouble long before star third baseman Justin Turner collapsed in a heap, but the optics of his late-game injury certainly didn’t help matters in NLCS Game 4. After all, it’s difficult to muster up one more rallying cry when your de...
MLB・4 DAYS AGO
FanSided

The Los Angeles Dodgers’ 2021 season ended with a thud. They had the highest of expectations coming into this year and, somehow, so many things went wrong. From Clayton Kershaw and Max Muncy going down right before the postseason to Trevor Bauer and Dustin May missing more than half the year to the San Francisco Giants coming out of nowhere to win 107 games, the Dodgers did their best to keep pace, but it wasn’t enough.
MLB・3 DAYS AGO
The Spun

Justin Fields and the Chicago Bears had a pretty rough Sunday. Chicago was thumped by Tampa Bay, 38-3, at Raymond James Stadium. The Buccaneers improved to 6-1 on the season with the win, while the Bears dropped to 3-4. Fields, the rookie quarterback out of Ohio State, had his most-frustrating...
NFL・2 DAYS AGO
FanSided

Los Angeles Dodgers manager Dave Roberts is having to try to come back in the NLCS without a healthy Max Scherzer. In retrospect, he’s confident the difficult spot he’s in was preventable. Roberts said Saturday that the decision to use Scherzer to close out the NLDS against San Francisco has...
MLB・3 DAYS AGO
USA TODAY

The Chicago White Sox were eliminated from the playoffs on Tuesday after losing Game 4 of their American League Division Series, 10-1, to the Houston Astros. The White Sox, specifically manager Tony La Russa, did not go quietly into the winter, however. Rather, La Russa made it clear that he...
MLB・14 DAYS AGO
ClutchPoints

Shohei Ohtani recently put doubts on his future with the Los Angeles Angels after expressing his desire to win at the highest level. However, perhaps in a bid to stop the speculations from further spreading, he reiterated his love for the team. Per the Associated Press, Ohtani shared that he...
LOS ANGELES, CA・23 DAYS AGO