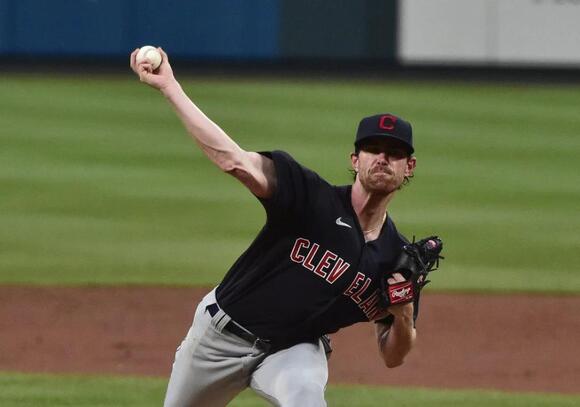 Bieber’s shoulder felt good during a 57-pitch rehab start for Double-A Akron on Sunday despite serving up two homers and allowing three runs in 3 1/3 innings. He followed up with a bullpen session on Tuesday.

“He felt pretty good, so we’re comfortable with starting him Friday,” Indians acting manager DeMarlo Hale told reporters on Wednesday. “We’ll definitely put a pitch count on him. We haven’t established that yet, but it won’t be too big of a jump from a rehab game in the minors.”

Cleveland has Last Game as the Indians

This past weekend, Ohio’s baseball team, the Cleveland Indians, won their home game against the Kansas City Royals 8 to 3. But this game is not any ordinary game, nor is it like the games the team has played before in their long history as a team beginning in 1915. Cleveland’s home game against the Kansas City Royals is their last game as the Indians, and will continue next season as a team- but under a new name and identity: the Cleveland Guardians. This last game ended a long 106-year run as a team under the name Cleveland Indians, as the team announced the name change in the wake of controversy rocking the American sports league regarding racist names and symbols. Opinions continue to vary on the name change and symbol. Some believe the change was long since overdue, while others still aren’t ready to say goodbye to the team’s long history as the Indians.
COLUMBUS, OH・13 DAYS AGO
chatsports.com

MLB Trade Rumors has released their annual estimates for salary arbitration, and they have Cleveland on the hook for around $30 million between nine arbitration-eligible players. This comes with a few caveats, however. But before that, head over there if you want to see the full projections for the league...
MLB・8 DAYS AGO
Cleveland.com

CLEVELAND, Ohio -- Since we’re talking about the hitters’ report card for the 2021 MLB season, let’s avoid the confusion and just call the Cleveland Guardians the Cleveland Indians for this exercise. What the numbers show is probably what you already know. The Indians didn’t do a whole lot to...
MLB・7 DAYS AGO

CLEVELAND, Ohio -- For a time during the 2021 season the Indians’ pitching factory seemed to run out of nuts, bolts, widgets and arms. The assembly line had trouble keeping pace with the injuries on the big-league staff. Starters Zach Plesac, Shane Bieber and Aaron Civale all missed significant time...
MLB・6 DAYS AGO
chatsports.com

CHICAGO -- Carter Hawkins was part of Cleveland's front office when the Indians lost to the Chicago Cubs in the 2016 World Series. He vividly remembers being on the team bus for the trip to the airport after Game 5. "We're just inching along, just barely going anywhere. There's people...
MLB・1 DAY AGO
New York Post

The biggest winner of the 2021 major league season is … the 2017 Houston Astros. Settle down. I have not come to exonerate or forgive the sign stealers. I would not argue with anyone who feels the players got off easy by not facing suspension, and the bans on, say, Alex Cora and A.J. Hinch should have been longer than one year considering their one-year expulsions came in the one year the major league season was 60 regular-season games.
MLB・25 DAYS AGO

Boston Red Sox fans let Kyle Schwarber have it for letting a pop-up land on the infield, and he probably had it coming. If you let Schwarber play first base long enough, something like this was bound to happen. The Sox knew this when they acquired him from the Washington Nationals, and they sure as hell didn’t trade for him because of his defensive ability.
MLB・25 DAYS AGO
USA TODAY

"When you are doing (an interview) live something usually always happens," Dusty Baker said explaining his on-air reaction to Kiké Hernandez's homer.
MLB・4 DAYS AGO
NJ.com

Carlos Correa is going to get paid. It’s just a matter of how much the two-time All-Star will be offered. Correa headlines a bumper crop of free-agent shortstops, which also includes the Los Angeles Dodgers’ Corey Seager, Colorado Rockies’ Trevor Story and New York Mets’ Javier Baez. So what will...
MLB・6 DAYS AGO
CBS Sports

The Chicago White Sox were eliminated from the playoffs on Tuesday after losing Game 4 of their American League Division Series, 10-1, to the Houston Astros. The White Sox, specifically manager Tony La Russa, did not go quietly into the winter, however. Rather, La Russa made it clear that he...
MLB・7 DAYS AGO

Remember during the AL Wild Card Game a few years back between the New York Yankees and Oakland Athletics? A matchup that resulted in a 7-2 victory for the Bombers was overshadowed by the baseball community whining about an innocent A’s fan getting three ounces of beer dumped on his head during a home run celebration.
MLB・12 DAYS AGO
The Spun

Max Scherzer started the Wild Card game for the Los Angeles Dodgers tonight. He did not make it through the fifth inning. While Scherzer gave up just one run, Dodgers manager Dave Roberts pulled his ace with one out and two men on in the top of the fifth inning.
MLB・13 DAYS AGO
Bleacher Report

Three of our six experts think the NL Central champions will go on to win the World Series.
MLB・13 DAYS AGO
FanSided

While there are sure to be some free agent signings and wheeling and dealing by Jed Hoyer this offseason, it’s a good bet that a few of your favorite September (and October) Chicago Cubs will still be playing with the team in 2022. We know that won’t be the case for all 67 of the guys the Cubs have used this season, but there’s reason for hope for a few of the bright spots amongst the new-look end of summer North Siders.
MLB・17 DAYS AGO
MLB Trade Rumors

By Michael Hurley, CBS Boston BOSTON (CBS) — Alex Cora was certainly guilty of participating in a sign-stealing scheme executed by the 2017 Houston Astros en route to their World Series championship. Then the bench coach of the Astros, Cora has admitted as much numerous times since MLB handed out punishment last April. Yet, the punishment was certainly distributed disproportionately. Despite MLB determining the operation was “player-driven and player-executed,” there were no players punished. Only Cora, then-manager A.J. Hinch, and then-GM Jeff Luhnow, were suspended after the investigation. The only player to suffer any consequences was Carlos Beltran, who had been named the...
MLB・4 DAYS AGO