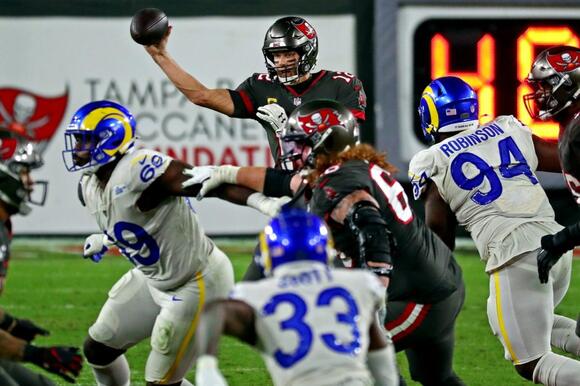 The Tampa Bay Buccaneers could be without dynamic receiver Antonio Brown when they face the Los Angeles Rams at SoFi Stadium on Sunday in a rematch from last season.

However, the Brady-led Bucs went on to win the Super Bowl while the Rams lost on the road to the Green Bay Packers in the divisional round of the playoffs.

The Bucs (2-0) placed Brown on the reserve/COVID-19 list on Wednesday, making it likely he will miss Sunday’s game in L.A. Brown is the third Tampa Bay player placed on the COVID list this week, joining linebacker Kevin Minter and practice squad receiver Travis Jonsen.

Because he’s vaccinated, Brown is eligible to return to the active roster with two negative COVID-19 tests, 24 hours apart, as long as he’s asymptomatic. 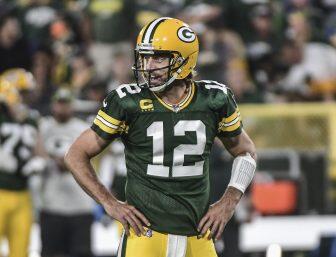 Edge rusher Jason Pierre-Paul (hand/shoulder) and kick returner Jaydon Mickens (abdomen) did not practice on Wednesday for the Bucs. With Brown and Mickens possibly unavailable, Tampa Bay rookie Jaelon Darden could get some meaningful snaps on Sunday.

For the Rams, edge rusher Leonard Floyd (ankle) and running back Darrell Henderson Jr. (ribs) did not practice on Wednesday.

Also, McVay missed practice with a stomach bug. According to the team, McVay tested negative for COVID-19 .

The Rams lead the all-time series 17-9 (including playoffs) and have won six of the past seven games. However, the Bucs won the last game played in L.A., taking home a 55-40 victory on Sept. 29, 2019 — a game in which quarterback Jared Goff threw for 517 yards but turned it over four times.

Goff, of course, is no longer on the roster after a trade to the Detroit Lions during the offseason. His replacement, Matthew Stafford has completed nearly 70 percent of his passes for 599 yards, with five touchdowns and just one interception.

“They’re probably pushing it down the field a bit more,” Tampa Bay coach Bruce Arians said , when asked about the difference in L.A.’s offense with Stafford under center. “The rest of it looks just like Sean’s offense. There’s some balls that go way down the field with his arm off play-action that we have to be ready for.”

Brady has completed 65.1 percent of his passes for 655 passing yards, with nine touchdowns and just two interceptions through two games. The Bucs average a league-leading 39.5 points a contest.

Brady last played a game in Los Angeles during the 1998 Rose Bowl as a backup quarterback for the University of Michigan.

“I’m scared to death,” joked Rams defensive coordinator Raheem Morris when asked about going up against Brady. “No, Tom is the ultimate competitor. He’s one of those quarterbacks where you can say what you want to say but you know he’s coming, when he’s on the opposing team.” 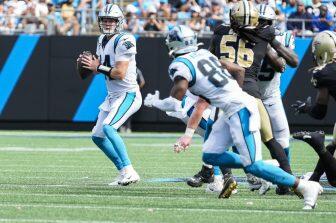 The All-Pro David has 59 tackles (8.4 per game) and 11 tackles for loss in seven career games against the Rams.

The Buccaneers wild win over the Patriots on Sunday didn't just allow Tom Brady to get revenge on his old team, the victory also allowed Brady to enter a very exclusive club. Thanks to the victory, Brady is now just the fourth quarterback in NFL history to defeat all 32 teams, joining Peyton Manning, Drew Brees and Brett Favre.
NFL・18 DAYS AGO
USA TODAY

The Buccaneers' defensive back situation got more precarious when Richard Sherman was ruled out of Thursday night's game against the Eagles.
NFL・8 DAYS AGO
987theshark.com

Bruce Arians Says Running Back is on Thin Ice

Bruce Arians is not happy with Runnin Back Gio Bernard after the Bucs defeat of Miami last Sunday. Arians was happy with Bernards’s total scoring but his pass defense was not up to standards. “I was pleased with it at the end, I didn’t like when he got run over...
NFL・5 DAYS AGO
Los Angeles Times

The Arizona Cardinals are the last undefeated team in the NFL, and have finally reached the top of our Power Ranking.
NFL・1 DAY AGO
Sports Illustrated

Check out odds, plays and more for the Tampa Bay Buccaneers vs. Miami Dolphins NFL Week 5 matchup on October 10, 2021.
NFL・13 DAYS AGO
FanSided

The LA Rams are 4-1 and are back on the road this Sunday after a long restful weekend following a pretty significant win in Seattle on Thursday against the Seahawks. At 4-1, the LA Rams are among the most successful teams in the NFL and are just one game against the Arizona Cardinals.
NFL・11 DAYS AGO

Super Bowl champion, meet basement dweller. The ready and rowdy Philadelphia Eagles host the defending champion Tampa Bay Buccaneers in this NFL Week 6 Thursday Night Football battle. In this prime-time matchup, let’s dive into the Buccaneers vs. Eagles game and determine the best side for this NFL betting prediction and pick for Thursday Night Football in Week 6.
NFL・8 DAYS AGO

What time is the NFL game tonight? TV schedule, channel for Buccaneers vs. Eagles in Week 6

The time for "Thursday Night Football" will be the same in Week 6 as it is all season. Tom Brady and the Buccaneers will kick off against the Eagles at 8:20 p.m. ET. There will be plenty of pregame coverage for the event beginning at 7:30 p.m. ET, but kickoff will take place at 8:20.
NFL・9 DAYS AGO
Sports Illustrated

Which players will find the end zone during Thursday's Eagles-Buccaneers game? Here are the player prop bets to target.
NFL・10 DAYS AGO
sportsgamblingpodcast.com

Once again, the reigning Super Bowl champions grace primetime television and set up these Week 6 NFL Thursday Night Football DraftKings picks. The Bucs enter the game 6.5 point favorites with an implied total of 29 points. On the other hand, the Eagles are only expected to score 22 points in this game. This all should lead to a fair amount of fantasy points up for grabs. Of course, we have seen Tampa Bay explode offensively so pretty much anything is to be expected as we enter this weekday showdown matchup.
NFL・10 DAYS AGO
profootballnetwork.com

The NFL continues to put out a product that is as intoxicated as many of the fans on the couch at home are. Our NFL Power Rankings heading into Week 7 are an extension of the wacky season we’ve seen thus far. There are a lot of teams that are struggling with injuries, poor coaching, or a combination of the two. Currently, there are very few legitimate contenders in the NFL. Did your favorite team make that cut?
NFL・5 DAYS AGO

(CBS Chicago) — The Green Bay Packers have once again jumped out to an early lead in the NFC North race. Aaron Rodgers is in his usual elite form leading a balanced Packers attack. Most recently they disposed of the Bears, who are still finding their way with Justin Fields. Elsewhere in the division, Kirk Cousins is making plays and generally giving the Minnesota Vikings a chance to win. Jared Goff, like the rest of the Detroit Lions, are stuck in football purgatory. Rolling into Week 7, the Packers face another favorable matchup, when the Washington Football Team comes to town....
NFL・2 DAYS AGO
Sportsnaut

The 2021 NFL season is officially underway and Week 6 delivered some surprising performances across the league. With high-scoring games
NFL・1 DAY AGO