Chargers' Asante Samuel Jr. had it covered against Cowboys 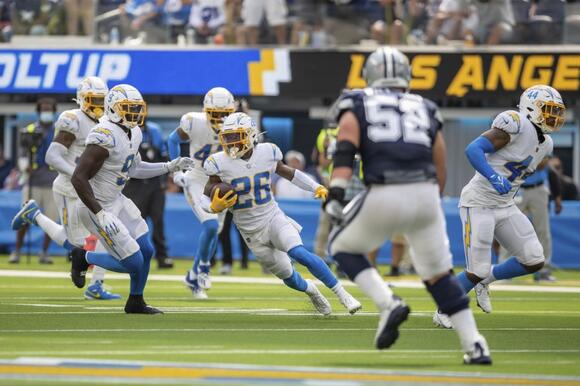 Coach Brandon Staley praised the Chargers ’ rookie cornerback for the play but said there were better ways to gauge Samuel’s performance to date.

“You can really measure him when he's going nose to nose with somebody really good,” Staley said Wednesday. “You can measure Asante less on his interception — which is fantastic — but more on a nose-to-nose play.”

Samuel broke up a second-down pass intended for Cooper in the end zone in the first quarter. He then blanketed Cooper to force an incompletion on fourth down shortly before halftime.

“When you’re nose to nose with a premium player, with a $100-million receiver, how are you playing?” Staley said. “He’s shown that he can go nose to nose.”

Staley also applauded Samuel, a second-round pick, for bouncing back after he permitted a completion Sunday to CeeDee Lamb, a receiver Staley called “one of the elite players in the league.”

“What happened after that 14-yard play is he got right back in the huddle and kept playing,” Staley said. “That's what we need from him. We really like coaching the guy. He's got real toughness, real instincts.

The challenge elevates this week for Samuel, who enters his first career matchup against quarterback Patrick Mahomes and a Kansas City offense that features blurring speed in receivers Tyreek Hill and Mecole Hardman.

Hill, especially, has burned the Chargers in recent seasons — both catching passes and returning kicks. He is coming off a three-catch, 14-yard performance at Baltimore after totaling 197 yards receiving against Cleveland.

Third-year safety Nasir Adderley said Wednesday he is dealing with a dislocated finger that he originally hurt in college. Adderley said the problem is impacting his ability to catch the ball.

He clearly missed a potential interception in the Chargers’ 20-16 win at Washington in Week 1. On Sunday, he was unable to secure a Prescott pass in the end zone intended for tight end Blake Jarwin.

“I’ve never had a problem coming down with interceptions and stuff like that,” Adderley said, adding that those are “plays I’ve made all my life.”

Regarding the play against Jarwin, Staley said: “Yeah, we want to finish that play. But he climbed a ladder. He was up, up and away on that.”

Washington ran a similar route against Adderley with tight end Logan Thomas in the opener. In that case, the result was an 11-yard touchdown because Adderley was out of position.

This time, even without producing the pickoff, he used much better technique.

“I think he took a big step forward ...” Staley said. “I felt like he tackled really well. He was really active from a communication standpoint. I really felt like he played a good game. I felt him. I saw him.”

Defensive back Chris Harris Jr. remained out Wednesday because of a shoulder injury. He was hurt in the Chargers’ opener and sat out the game against Dallas.

Defensive lineman Justin Jones (calf) also did not practice after not playing against the Cowboys.

Edge rusher Joey Bosa (ankle) and safety Derwin James Jr. (toe) were the only other players to miss practice. Those two situations are thought to be more precautionary.

Could the 4-1 Dallas Cowboys find a way to use Trevon Diggs as a receiver? Definitely. But quarterback Dak Prescott isn’t chomping at the bit for the star corner to switch sides of the ball. Prescott told Diggs to “relax,” after the second-year corner out of Alabama requested some offensive...
NFL・6 DAYS AGO
Sportsnaut

Officials blasted for robbing Dallas Cowboys of an obvious TD

Dallas Cowboys fans aren’t very happy with Tony Romo on Sunday afternoon. Romo, who starred for the Cowboys before retiring from football, is on the call of Sunday afternoon’s game between Dallas and New England. Throughout the season, Romo has been hyping up offensive coordinator Kellen Moore, claiming he’ll be...
NFL・16 HOURS AGO
The Spun

Legendary NFL quarterback Brett Favre had some pretty lofty praise for Dallas Cowboys quarterback Dak Prescott earlier this week. Favre, one of the greatest quarterbacks in NFL history, is a big fan of what he’s seeing from the Cowboys quarterback. Dallas is 2-1 on the season, coming off back-to-back wins...
NFL・15 DAYS AGO

The Dallas Cowboys are off to a 3-1 start, and the electric and efficient performance of quarterback Dak Prescott is the pivotal reason why. And Jimmy Johnson has taken notice. Some of this is about the numbers. Through four games, Prescott is completing 75 percent of his passes for 1,066...
NFL・13 DAYS AGO
USA TODAY

Jerry Jones said Tuesday that Jon Gruden's resignation as Raiders coach reminded the Cowboys owner "we are all accountable."
NFL・5 DAYS AGO
The Spun

Baker Mayfield’s wife had a blunt message for Cleveland Browns fans – and the rest of the NFL – following last weekend’s crushing loss to the Los Angeles Chargers. The Browns lost a heartbreaker to the Chargers in Los Angeles, falling 47-42. While Mayfield played well in that game, he couldn’t get it done late, leading to a larger conversation about his ability to lead a team to a Super Bowl.
NFL・20 HOURS AGO
Dallas News

The Dallas Cowboys snapped their losing streak against the New England Patriots on Sunday in Foxborough. After a back-and-fourth affair that saw multiple momentum swings in the fourth quarter, wide receiver CeeDee Lamb caught a 35-yard touchdown reception from quarterback Dak Prescott in overtime to give Dallas its fifth straight win. The Cowboys now have as many wins as the rest of the NFC East, combined.
NFL・14 HOURS AGO

ARLINGTON - Dallas Cowboys quarterback is on stage today here at AT&T Stadium to play the New York Giants on national TV. But on Friday, he appeared in court to testify against accusations of bribery made against friend and teammate La’el Collins, who is fighting a five-game suspension for allegedly violating the NFL’s substance-abuse policy.
NFL・7 DAYS AGO
kslsports.com

Missed Facemask Call In Overtime Has Patriots Fans In Uproar

FOXBORO (CBS) — The Dallas Cowboys were responsible for a lot of laundry being tossed on the field throughout Sunday’s overtime win over the Patriots in Foxboro. But it was one penalty flag that wasn’t thrown that has New England in an uproar. At least virtually, that is. Because everyone airs their grievances on Twitter, about everything. But they do have a case, and a strong one a that. The missed call was a big one, as it came early in overtime on New England’s only possession of the extra frame. Nelson Agholor went out for a pass on a third-and-3 play,...
NFL・13 HOURS AGO

Odell Beckham Jr. hasn’t quite made an impact worthy of his superstar status on the Cleveland Browns this season, and it appears that his role on the team isn’t getting any better. Even without Jarvis Landry, who is sidelined with an injury, Beckham continues to struggle for production downfield. Baker Mayfield targeted Beckham Jr. just three times in the Browns’ 47-42 road loss in Week 5 against Justin Herbert and the Los Angeles Chargers.
NFL・6 DAYS AGO
Los Angeles Times

The Chargers announced that linebacker Kenneth Murray Jr. will not play Monday night against the Las Vegas Raiders.
NFL・14 DAYS AGO
abc17news.com

It’s Week 5, and the cream is starting to rise to the top in fantasy football. These players are my best bets to score at the running back and wide receiver positions.
NFL・11 DAYS AGO
dallassun.com

ENGLEWOOD — Any chances McMinn Central had at a rally tumbled away in the first four minutes of the fourth quarter. Kingston scored three touchdowns over that stretch, taking advantage of two turnovers the Chargers committed in their own territory, to send Central free-falling to a 41-14 defeat in Region 3-3A play on Friday at Charger Field.
KINGSTON, TN・14 DAYS AGO
Daily Breeze

COSTA MESA — Chargers quarterback Justin Herbert often recites three names when asked why the offense is playing well this season. The mismatches that tight end Jared Cook and wide receivers Keenan Allen and Mike Williams have created have made life easier for Herbert and the second-year quarterback makes sure they get their share of the credit for the team’s 3-1 start.
NFL・11 DAYS AGO
Bolts From The Blue

Chargers open as 1-point favorites at home against the Browns

With their 28-14 primetime victory over the Raiders now behind them, the Chargers will look to this coming Sunday as they host the 3-1 Browns inside SoFi Stadium. It’s AFC West vs. AFC North which pits two of the best teams in two of the divisions in football against each other. What’s not to love?
NFL・12 DAYS AGO
Manteca Bulletin