‘The Masked Singer’ spoilers: Who is Mother Nature? 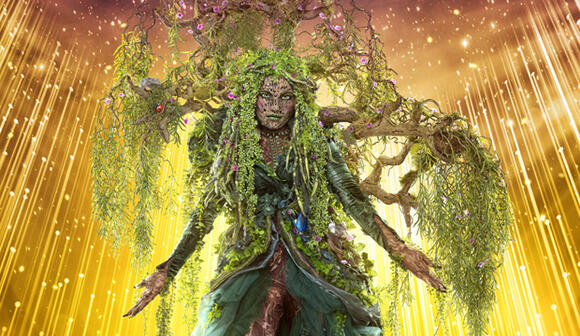 “ The Masked Singer ” kicked off season 6 with a two-part premiere that showcases Group A. During the show’s regular Wednesday time slot on September 22, we met the first five famous folk competing to win the Golden Mask. They are disguised as the Bull, Mother Nature, Octopus, Pufferfish and Skunk. Before each of them performed for the four judges ( Ken Jeong , Jenny McCarthy , Nicole Scherzinger, Robin Thicke ), we were teased with clues as to their true identities. Keep reading for “The Masked Singer” spoilers, including the real name of Mother Nature.

We think that Mother Nature is Niecy Nash . This versatile talent has a strong connection to the “The Masked Singer.” She served as a guest judge on the season 4 Group A finals. She then pinch hit for host Nick Cannon when he came down with COVID last season. She fronted the first five episodes of season 5 before Nick made his return disguised as a Wild Card entry, the Bulldog. Niecy, who was in on the joke, tapped him for elimination.

SEE Everything to know about ‘The Masked Singer’ Season 6

Niecy’s appearance would be a great way to promote her upcoming stint as the host of a new version of the game show “Don’t Forget the Lyrics!” This reboot of the show originally hosted by Wayne Brady (who won season 2 of “The Masked Singer”), is set to air on FOX later this season.

While Nash is best-known for her comedy, she is also a well-regarded dramatic actress. She earned an Emmy nomination in 2019 for her heartbreaking performance on the Netflix limited series “When They See Us.” As a group, this season’s contestants on “The Masked Singer” have contended for TV’s top honor a dozen times.

We will only find out if we are right that Niecy Nash is Mother Nature when she is unmasked. That will happen when she loses a vote or wins the show. Do you think we are right about the true identity of Mother Nature? Sound off in the comments section with your best guesses.

SEE exclusive predictions: Who will win ‘The Masked Singer’?

Be sure to make your predictions to influence our reality TV racetrack odds. You can keep changing your predictions until just before the next episode airs on Fox. You’ll compete to win eternal bragging rights and a spot on our “The Masked Singer” Season 6 leaderboard. See our contest rules and sound off with other fans in our reality TV forum . Read more Gold Derby entertainment news .

Who Is Jester on 'The Masked Singer'? Fans Are Intrigued by This Nightmarish Costume

Everyone is hooked on the guessing game where celebrities dress up in costumes and make audiences question how well they know their favorite stars. The Masked Singer may be in its sixth season, but that doesn't mean it's any less fun! Audience members were recently introduced to the Wildcard character Jester, and he's already causing quite a stir.
BEAUTY & FASHION・11 DAYS AGO
CinemaBlend

Who Are The Masked Singer's Banana Split Duo? Here's Our Best Guess

Warning! The following contains spoilers for The Masked Singer Season 6 episode “Date Night.” Read at your own risk!. The Masked Singer’s “Date Night” gave fans more clues than ever on the identities of contestants. Despite that, it’s been a challenge to guess all the contestants of Season 6, especially Cupcake, who was unmasked this week and revealed to be legendary singer Ruth Pointer. While I wasn’t quick enough to the draw to figure out her identity, I do think I have a solid guess on who the latest duo to grace the Fox series, Banana Split, may be.
TV & VIDEOS・11 DAYS AGO
The Independent

Who left Dancing with the Stars on Monday night?

Bling Empire star Christine Chiu and her pro partner Pasha Pashkov were eliminated in the third episode of Dancing with the Stars as season 30 saw teams performing Britney Spears’ biggest hits.Chiu and Pashkov were placed in the bottom two alongside Real Housewives of Atlanta star Kenya Moore and her pro partner Brandon Armstrong.Last week, contestants Cody Risby and Cheryl Burke announced that they had tested positive for Covid-19, so instead of performing on the DWTS stage, they delivered a virtual performance from their homes. American professional Latin and ballroom dancer Derek Hough was absent from Monday’s (4...
TV SHOWS・20 DAYS AGO
Vulture

This week’s clue package for The Masked Singer: Despite the national coin shortage, The Masked Singer invites you to invest in coins. If you somehow guessed that the competition show straight out of a sitcom is going to be selling NFTs, then please buy a lottery ticket ASAP. Fox Entertainment launched MaskVerse, an NFT marketplace, for its hit series The Masked Singer. Fox describes the site as “a new experience for The Masked Singer (TMS) fans and crypto enthusiasts to buy, sell, and trade unique digital collectibles — Mask NFTs — for their own collections and/or to unlock a variety of benefits. Masks are Non-Fungible Tokens, or ‘NFTs,’ meaning they are scarce and unique digital assets for which there is no copy or substitute and where your ownership is recorded on the blockchain in perpetuity.”
LOTTERY・11 DAYS AGO

The Hamster reveal on ‘The Masked Singer’ will blow you away

LOS ANGELES - The sixth season of "The Masked Singer" continues to throw wild card reveals at the fans — and Wednesday night it came with another memorable reveal. Legendary comedian Rob Schneider was revealed as The Hamster and it turns out he was a real "hamateur." "I always wanted...
TV SERIES・4 DAYS AGO
Popculture

Who Is Pepper in 'The Masked Singer' Season 6?

Throughout Season 6 of The Masked Singer, Wildcard contenders have entered the fray. During Episode 4, the show introduced fans to the latest Wildcard contestant, the Pepper. Who is the Pepper? Check out all of the clues that you need to know about the mystery singer. Additionally, if you want to catch The Masked Singer live for yourself, you can check out FuboTV, which is offering a free trial to new subscribers.
TV SHOWS・14 DAYS AGO
Parade

A Sweet Reveal! Who Was Eliminated from The Masked Singer Tonight?

Group B came back for “Date Night” on The Masked Singer. It was an episode full of new suitors entering the picture, some building love, and ultimately one mask stood up and being forced to reveal themselves. Check more information about tonight’s episode below. Who got unmasked on the The...
TV SHOWS・11 DAYS AGO
New Haven Register

'The Masked Singer' Reveals Identity of the Cupcake: Here's the Star Under the Mask

Ruth Pointer was so excited to be on “The Masked Singer,” but a victory wasn’t automatic — and in the end, she had to jump off the stage, as the Pointer Sisters member was unmasked at the end of the fifth episode of Season 6, “Date Night.”. More from Variety.
TV & VIDEOS・11 DAYS AGO

Wednesday night on “The Masked Singer,” Group B returned, a wildcard entered the competition, and fans finally discovered who was behind the Cupcake mask. Ruth Pointer, a member of the three-time Grammy award-winning Group The Pointer Sisters, joined FOX40 to share details about her experience on the show.
TV & VIDEOS・11 DAYS AGO
Distractify

When it comes to The Masked Singer, we can't always guess who's behind the mask correctly. Some of the contestants change their voices and some aren't known for their vocal talent, so it's hard to be sure every time. Season 6 of the show is no different. But that hasn't stopped fans from making their best predictions.
TV & VIDEOS・11 DAYS AGO
E! News

The Masked Singer Reveals the Celebrity Behind the Cupcake

Watch: Nicole Scherzinger Goes Full Detective Mode for "Masked Singer" Love was in the air on the latest installment of The Masked Singer. On Wednesday, Oct. 13, season six continued with the affection-themed "Date Night" episode. The performances included duo Banana Split doing "Cry Me a River" by Michael Bublé, Cupcake keeping it funky with "Finesse" by Bruno Mars, Queen of Hearts getting sultry thanks to "La Vie en Rose" by Édith Piaf, Mallard bringing the energy back up with "My House" by Flo Rida and Caterpillar belting out "If I Were a Boy" by Beyoncé.
TV & VIDEOS・11 DAYS AGO
talentrecap.com

‘The Masked Singer’ Recap: Cupcake Revealed to Be a Music Legend

On Wednesday night, The Masked Singer Season 6 returned for a date night episode, as Group B performed for a second time, along with a new wildcard performer. The singers shared clues about their love lives and chose which judges they would date. At the end of the night, Cupcake...
ENTERTAINMENT・11 DAYS AGO

It’s not every day a three-time Grammy Award winner is sent home on The Masked Singer. But that happened Wednesday night (Oct. 13), when Cupcake got tossed. The latest episode of Fox’s unlikely hit returned to Group B, and its lineup of Banana Split, Queen of Hearts, Mallard and Cupcake, who tackled Bruno Mars' "Finesse".
CELEBRITIES・11 DAYS AGO
goodhousekeeping.com

Who Is Caterpillar on 'The Masked Singer'? Season 6's Latest Wildcard Has Everyone In Their Feels

The Masked Singer’s latest wildcard is pulling at judges’ heartstrings with his moving story and incredible voice. The Fox singing competition show welcomed Caterpillar on to the stage as the first wildcard for Group B and the vibrant contestant instantly sparked everyone’s curiosity. Judge Nicole Scherzinger couldn’t help but shed...
TV & VIDEOS・11 DAYS AGO
talentrecap.com

Who is the Caterpillar? ‘The Masked Singer’ Prediction + Clues Decoded!

The Caterpillar on 'The Masked Singer' Is Definitely a Swiftie

OK Taylor Swift fans, gather round, 'cause one of us is on The Masked Singer this season. The Caterpillar is a new contestant making their debut tonight on Fox, but a clue for whomever chose to don a bug costume on national television has dropped! Sure, knowing the person under the mask is a Swiftie fan might only narrow options down to about half the planet, but you best believe I'll be out here trying to figure out who it is until I'm 100 percent sure.
TV & VIDEOS・11 DAYS AGO
Popculture

'The Masked Singer': Hamster Is a Major Comedic Actor

Another The Masked Singer contestant bites the dust. On Wednesday night's episode, another one of Season 6's crowd-pleasing talents was knocked out. Group A was back in action, featuring The Bull, Skunk, Hamster, Pepper and a new Wildcard singer, Jester. Comedic crooner Hamster ended up having to unmask at the end of the night. Scroll through to learn Hamster's identity (if you weren't already watching via FuboTV or another live service). Spoilers ahead!
CELEBRITIES・4 DAYS AGO
realitytitbit.com

The Masked Singer has banned these costumes for their controversy

Amid the incredible outfits masking one’s identity, The Masked Singer reportedly banned a certain costume from entering the FOX stage. Celebrities, actors and singers are on the judges’ radar, as they basically become detectives by trying to figure out who’s behind the mask. Recent shocking news has it that some...
CELEBRITIES・11 DAYS AGO