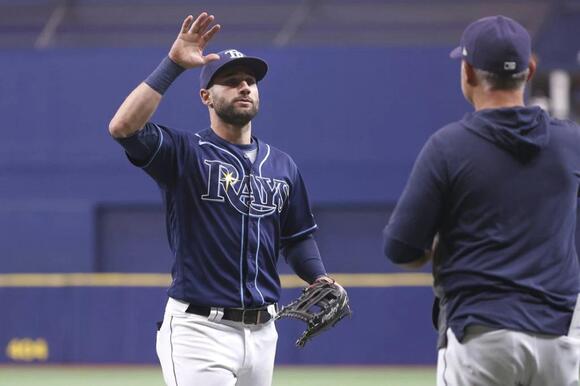 Tampa Bay Rays center fielder Kevin Kiermaier said prior to Wednesday’s game against Toronto that he is stunned by the reaction to him walking off the field with a scouting card belonging to Blue Jays catcher Alejandro Kirk on Monday night.

He probably wasn’t quite as surprised to be plunked in the back with a pitch during Wednesday’s 7-1 victory over Toronto.

The odd incident began with Kiermaier being tagged out at the plate during the sixth inning of Tampa Bay’s 6-4 home win over the Blue Jays on Monday.

As Kirk made the tag, the card fell from Kirk’s wristband and landed right next to Kiermaier. Kirk walked toward the Toronto dugout while Kiermaier looked down at the card for a second before picking it up and heading to the Rays’ dugout.

Meanwhile, Kiermaier has been the subject of criticism for his actions.

“Shocked to see what has transpired,” Kiermaier said Wednesday, adding the reaction is “just hard to believe.”

Prior to Tuesday’s game, he told Canada-based Sportsnet, “I never even looked at it, I’ll say that. But at the same time, I’m not going to drop it or hand it back.”

On Wednesday, Kiermaier insisted he did nothing wrong.

“We’re making this way too complex,” Kiermaier said. “I saw a few words on it, just knowing it wasn’t mine I didn’t look at it, still haven’t looked at it. Don’t even know what the heck is on it.

“A couple seconds after I realized it wasn’t ours and at that point, I’m not giving it back. I’m not going to walk to the other dugout or find another way. They can think whatever they want over there, they’re entitled to an opinion. I’m over it, though.”

However, the Blue Jays weren’t over it as left-hander Ryan Borucki nailed Kiermaier in the middle of the back with a 93-mph pitch in the bottom of the eighth inning.

Both benches emptied without incident but Borucki and Blue Jays pitching coach Pete Walker were ejected.

Borucki told reporters that the pitch got away from him.

“I accidentally hit him,” Borucki said. “They can think what they want over there.”

Wednesday’s game was the final regular-season matchup of the two American League East rivals. The Rays won two of three games in the final series and 11 of 19 overall.

The internet never forgets. Former New York Yankees slugger Alex Rodriguez has been covering the 2021 MLB playoffs by resuming his role as a studio analyst for FOX Sports. Last week, Rodriguez was analyzing the American League Division Series between the Boston Red Sox and Tampa Bay Rays with David Ortiz, Frank Thomas and Kevin Burkhardt. The gang was discussing a video clip from Game 1, when the Rays were seen eating popcorn in the dugout during the seventh inning of their 5-0 win.
MLB・13 DAYS AGO
USA TODAY

Three of our six experts think the NL Central champions will go on to win the World Series.
MLB・18 DAYS AGO
providencejournal.com

Red Sox go all in on Game 4 vs. Tampa Bay Rays in ALDS

BOSTON — Being in possession of two chances to close out their American League Division Series mattered little to Alex Cora on Monday. The Red Sox manager was prepared to go all-in again in Game 4 with the Rays. Nick Pivetta sacrificed a potential start to earn the victory in relief the previous night, a 13-inning classic that featured a walk-off home run from Christian Vazquez.
MLB・14 DAYS AGO
Sportsnaut

The Tampa Bay Rays will throw the kitchen sink at the Boston Red Sox on Monday, tabbing Collin McHugh to
MLB・14 DAYS AGO

David Hess, a pitcher within the Tampa Bay Rays organization, announced via Twitter on Wednesday that he has been diagnosed with a cancerous germ cell tumor in his chest. >> Subscribe to Sports Spectrum Magazine for more stories where sports and faith connect <<. “Life has a way of throwing...
BASEBALL・10 DAYS AGO
FanSided

There is much consolation when looking at the Tamp Bay Rays‘ ouster from the American League playoffs. Sure, they were beaten three games to one by the Boston Red Sox, but it took everything the Red Sox had to earn the victories. After splitting the first two games, the Rays battled the Red Sox through 13 innings in Game Three.
MLB・13 DAYS AGO
myq105.com

It’s do or die for our Tampa Bay Rays tonight. A loss means the season is over. A win means a Game 5 in St. Pete Wednesday night at Tropicana Field to decide who moves on. Kevin Kiermaier #39 of the Tampa Bay Rays reacts after Alex Verdugo #99 of the Boston Red Sox was called out at third in the eighth inning during Game 4 of the American League Division Series at Fenway Park on October 11, 2021 in Boston, Massachusetts. (Photo by Winslow Townson/Getty Images)
MLB・14 DAYS AGO

Tampa Bay Rays minor league pitcher David Hess announced that he is starting chemotherapy to treat a cancerous tumor in his chest. The 28-year-old pitcher broke the news in a tweet titled 'Life update' accompanied by a note that said he discovered the diagnosis a week ago when he went to an emergency room after experiencing chest tightness and shortness of breath.
MLB・12 DAYS AGO
ESPN

The Tampa Bay Rays won't represent the Junior Circuit in the World Series this year: The team's defense of its 2020 American League championship is over. In the 2021 MLB playoffs, the Rays couldn't get past their division series showdown against the Boston Red Sox, an AL East rival they had managed to beat by eight games in the division standings during the regular season. No excuses losing to a wild-card team, although a particularly controversial call in Game 3 certainly didn't help Tampa Bay's cause before a tough Game 4 loss ended the series.
MLB・14 DAYS AGO
chatsports.com

BOSTON — Kiké Hernandez delivered Boston’s second straight walk-off win, scoring pinch-runner Danny Santana with a sacrifice fly in the ninth inning to send the Red Sox to the AL Championship Series with a 6-5 win over the Tampa Bay Rays on Monday night. After winning Game 3 of their...
MLB・13 DAYS AGO
positivelyosceola.com

As the baseball sports information director at Florida State, I worked more than 400 college baseball games in my career. Working in minor league baseball, I was the official scorer for at least 500 games. As a fan, I probably have watched another 1500 games in my lifetime. And after all that, I can honestly say that I have never seen a play where a batted ball caromed off a wall, hit an outfielder, and exited the field. The Rays fan in me is mad, but I’m guessing it never happened in a major league game before. Why do I say that? Because I promise you they are going to announce a new rule on it during the off-season…
ALABAMA STATE・14 DAYS AGO

The Tampa Bay Rays have long been dissatisfied with Tropicana Field, their home ballpark. Built in the late 1980s to try to lure a MLB team (and the White Sox nearly moved there), it’s outdated and in probably the worst possible location in the Tampa Bay area for a ballpark — in a corner of St. Petersburg, across Tampa Bay from the bulk of the fanbase.
MLB・14 DAYS AGO
draysbay.com

Evil is triumphing over good all over the place in the LDS. The Braves knocked off the Brewers yesterday while Astros dispatched the White Sox. Meanwhile, late last night the Dodgers forced Game Five against the Giants. Game Five will be Thursday at 9:07 PM. “This is what baseball wants.”
MLB・13 DAYS AGO
NJ.com

The Tampa Bay Rays, led by outfielder Randy Arozarena, face the Boston Red Sox, led by the versatile Kyle Schwarber, in Game 4 of their best-of-five ALDS tie on Monday, October 11, 2021 (10/11/21) at Fenway Park in Boston, Massachusetts. Fans can watch the game for free via a trial...
MLB・14 DAYS AGO
The Big Lead

The Boston Red Sox benefitted from a wacky carom late Sunday night to take control of their divisional series against the Tampa Bay Rays, two games to one. It was a freakish play but was appropriately adjudicated. A walk-off homer in the bottom of the 13th proved, once again, that baseball is a game of inches and even a full team of Billy Zanes cannot make all their own luck.
MLB・14 DAYS AGO

"We're not going to let them use our wallets as an open bar," the Canadian Taxpayers Federation said.
MLB・15 HOURS AGO
CBS Sports

The Chicago White Sox were eliminated from the playoffs on Tuesday after losing Game 4 of their American League Division Series, 10-1, to the Houston Astros. The White Sox, specifically manager Tony La Russa, did not go quietly into the winter, however. Rather, La Russa made it clear that he...
MLB・12 DAYS AGO