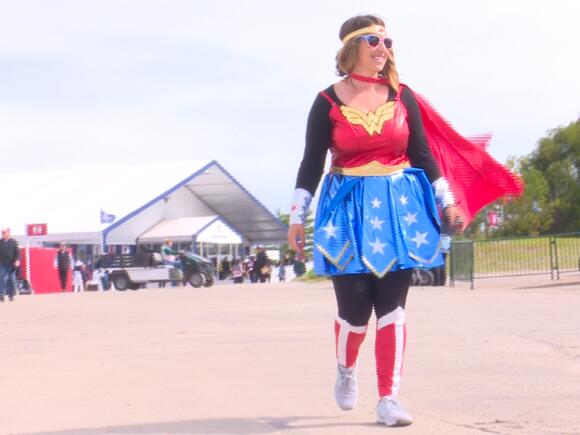 Even though the Ryder Cup features 24 of the best male golfers in the world, it hasn't stopped the women from coming out to cheer for Team USA.

Among the thousands of fans at Whistling Straits are women decked out in the red, white, and blue of Team USA and a few sporting the blue and yellow of Team Europe.

And these fans know their stuff, one woman NBC 26 spoke with said she wouldn't be surprised if she knew more about golf than the boys.

Jenn Harris has been playing golf since she was just a little girl.

Through the years, this male-dominant sport hasn’t stopped her from hitting the golf course.

On Wednesday, she arrived at the Ryder Cup sporting a Wonder Woman costume and other America-themed gear.

She explains the reason for her outfit choice is to represent all the ladies who also love golf.

“Wanted to do a tribute for women, powerful women and be out here and show, just be here for the younger girls and women everywhere. Show them we can be strong and have fun, and support golf,” Harris said.

She also shares what it’s like to be a woman involved with golfing.

“When I was seven in Atlanta, Georgia, so there was probably just me right on the driving range and that was probably it. And fast forward 30 years and there are definitely more women, I think they’re feeling more scared, a little nervous, and not as included as they should but there are more women out there, so the biggest thing we have to do as females to get women out there is to engage and bring more women out one by one bring someone out,” Harris said.

Harris who traveled all the way from San Diego, California for the Ryder Cup shares who she is most excited to watch.

“I love Schauffele, I think he’s great for the game”, Harris said.

Throughout the years, Harris has been so passionate about making the sport more welcoming for women that she even created a business named, High Heel Golfer .

“To help more women get into the game of golf for business, empower them to lean in and join the conversation right here on the golf course,” Harris said.

For another woman attending the Ryder Cup, she played golf throughout college.

She explains she first picked up her club in eighth grade and before she knew it she was recruited to golf for UW-Whitewater.

“Got a few lessons and my swing coach finally said you have too good of a natural swing to not play. We were four times back-to-back champions in our conference so that was four times qualifying for the national tournaments”, said Kelly Storti, Madison.

Both of these ladies and many more in attendance were passionate about playing and watching the game.

And while it's Storti's first time at a big golf event like this, for Harris this is her second Ryder Cup.

A few years ago she traveled overseas for her first one.

Paige Spiranac made a hole-in-one on Monday and not only had a handful of witnesses, but one was Gary Player. Spiranac aced the 148-yard, par-3 14th at GlenArbor Golf Club in Bedford Hills, New York at the Berenberg Invitational, a charity event to raise money for pancreatic cancer research. Player’s wife, Vivienne, died from the disease earlier this year.
BEDFORD HILLS, NY・19 DAYS AGO
FanSided

The Braves are doing anything but sticking to sports with their Game 6 National Anthem singer. Travis Tritt has made his COVID-19 vaccine stance very clear. Tritt is against COVID-19 vaccine mandates, so much so that he’s canceled dates on his own music tour for it. As a lifelong Braves fan and native of nearby Marietta, Georgia, Tritt was an easy choice for national anthem signer based on pure musical talent alone.
MLB・1 DAY AGO
St. Louis Post-Dispatch

Dustin Johnson has expressed a strong interest in becoming the US Ryder Cup captain one day and he is confident that he would be a successful leader. The former World No. 1 was the MVP for America at Whistling Straits. Steve Stricker chose him in all five matches and he delivered maximum points, becoming only the second American player to do so since 1979.
GOLF・10 DAYS AGO
NBC Sports

Bradie Tennell has withdrawn from this week’s Skate America due to a foot injury, U.S. Figure Skating announced Monday morning. Tennell, 23, who won the U.S. Figure Skating Championships in January – reclaiming the title after three years – was set to make her season debut this weekend in Las Vegas. The women’s short program is Saturday and the free skate Sunday at the Orleans Arena.
LAS VEGAS, NV・6 DAYS AGO
Santa Maria Times

KITAKYUSHU, Japan (AP) — Angelina Melnikova of Russia won the women’s all-around final on Thursday to claim the first gold medal of the gymnastics world championships. Melnikova, the 2020 Olympic all-around bronze medalist, built up a solid lead with high scores on the vault and uneven bars and finished with 56.632 points.
SPORTS・3 DAYS AGO
chimesnewspaper.com

On Oct. 7-9, women’s golf competed in the Westminster Wasatch Invitational in South Jordan, Utah. Leading the Eagles, sophomore Brady Turnquist placed first in the individual leaderboard for the second time this season. Despite a hailstorm and low temperatures at tee time, the women played an excellent game, placing second...
SOUTH JORDAN, UT・14 DAYS AGO

ALLENTOWN – The East Stroudsburg University women's golf team finished fifth in the team standings at the Muhlenberg Invitational on Monday at Lehigh Country Club. Junior Mariah Minter led the way for the Warriors with 97 (+27) on the par 70, 5,702-yard layout. Minter finished tied for 12th in the individual standings.
GOLF・13 DAYS AGO
KHON2

The Hawaii High School girls volleyball season is in full swing and so is the state’s most dynamic talent. Two weeks ago, Kamehameha senior Devin Kahahawai returned to the Warriors after winning a bronze medal with Team USA’s U18 squad at the FIVB World Championships in Mexico. “It was honestly...
HONOLULU, HI・6 DAYS AGO
aicyellowjackets.com

Leanne Wong and Kayla DiCello brought home silver and bronze medals in the all-around while Stephen Nedoroscik became the first American to win a world title on pommel horse.
SPORTS・11 HOURS AGO
nbcsportsedge.com

This week's CJ CUP @ SUMMIT is being hosted by a new course. One that we've never seen in competition. Without any course history to lean on, how do we find any standout value plays for DFS? I think the two most obvious routes is to look at some course-fit stats or look through a closer lens and dive into the recent stats. See who is playing well over the last few months.
GOLF・11 DAYS AGO
gozags.com

Women’s Golf in Fifth after Day 1

LAKEWOOD, Wash. — The Gonzaga women's golf team is in fifth place following the first two rounds of the Pat Lesser-Harbottle SeattleU Invitational at the Tacoma Country and Golf Club. The Bulldogs are 29-over (605) entering the third and final round. GU was 17-over (305) in the first round and...
LAKEWOOD, WA・13 DAYS AGO
numberfire.com

By now, you've probably dabbled in daily fantasy sports, but if not, don't worry. Now is a great time to start, especially with FanDuel's daily fantasy golf offering. Golf can be one of the most exciting DFS sports to follow, as tournaments span four days and allow ample time to prepare each week. It's a great balance between time to research and time spent tracking your team.
GOLF・12 DAYS AGO
Yale Daily News

The Yale women’s golf team tied for second at the Yale Invitational over the weekend with two players placing within the top ten. The Bulldogs hosted 10 other teams at the historic Yale Golf Course on Saturday and Sunday. Boston College finished first with a team score of 14 strokes over par, while Yale and Boston University tied for second place with final scores of 25 over par. Yale led the five Ivy League teams present and Elis Ami Gianchandani ’23 and Kaitlyn Lee ’23 ranked fourth and tenth individually, respectively.
GOLF・12 DAYS AGO
chatsports.com

SAN MARCOS, Texas – A second straight tournament in the state of Oklahoma is on tap for the Texas State women's golf team. The Bobcats head to Broken Arrow, Okla. to compete in the Dale McNamara Invitational at the Golf Club of Oklahoma on Monday and Tuesday. The Tulsa-hosted tournament...
OKLAHOMA STATE・14 DAYS AGO
LSUSports.net

BATON ROUGE – The LSU women’s golf team, after being off for almost a month, now begins a busy stretch to conclude the fall season when they play in the two-day Illini Women’s Invitational at Medinah. The 15-team event will take place at Medinah Country Club, one of the most...
MEDINAH, IL・14 DAYS AGO
dordt.edu