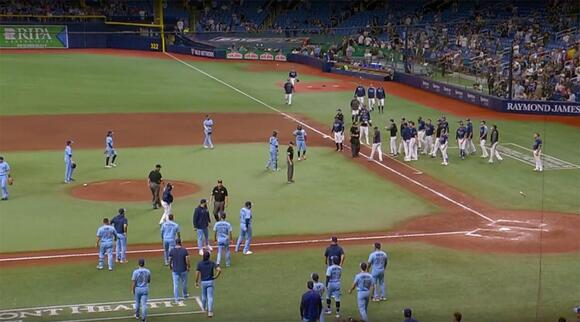 The drama between the Rays and Blue Jays continued Wednesday when reliever Ryan Borucki hit Kevin Kiermaier with a pitch, causing the benches to clear.

Borucki and Blue Jays pitching coach Pete Walker were both ejected from the game.

During Tampa Bay's 6–4 win on Monday, Kiermaier tried to score in the sixth inning but was tagged out by Blue Jays catcher Alejandro Kirk, ending the inning. After Kirk retreated to Toronto's dugout, Kiermaier noticed a piece of paper had fallen out of Kirk's wristband and took it back to his dugout.

The Rays then discovered the card contained Toronto's game plan for Rays hitters. The next day, Kiermaier said he hadn't initially known what it was and that he had handed it to team personnel and didn't know what happened to the card after that.

“Everything was so quick and after I did it I was like, ‘Dang, their scouting reports or whatever it was, was on the ground and I grabbed it.’ Like I said, it got to the point that I’m not going to return it or do that," he said. "It’s September, whatever. I didn’t know what was going on.”

BACCELLIERI: Don't Blame the Rays for Taking the Jays' Notecard

The Blue Jays were reportedly livid when they realized what happened and even sent a bat boy to Tampa Bay's dugout for it to be returned, which was rebuffed, per Sportsnet's Arash Madani . On Wednesday, Rays manager Kevin Cash and Blue Jays manager Charlie Montoyo reportedly settled the debacle and Cash returned the card, per MLB Network's John Heyman .

The Rays eventually went on to win 7–1 Wednesday night to become the first AL team of the season to clinch a playoff berth .

The internet never forgets. Former New York Yankees slugger Alex Rodriguez has been covering the 2021 MLB playoffs by resuming his role as a studio analyst for FOX Sports. Last week, Rodriguez was analyzing the American League Division Series between the Boston Red Sox and Tampa Bay Rays with David Ortiz, Frank Thomas and Kevin Burkhardt. The gang was discussing a video clip from Game 1, when the Rays were seen eating popcorn in the dugout during the seventh inning of their 5-0 win.
MLB・13 DAYS AGO
USA TODAY

Three of our six experts think the NL Central champions will go on to win the World Series.
MLB・19 DAYS AGO
MLB Trade Rumors

Rays backstop Mike Zunino had the best season of his career in 2021, and his durability and strong production behind the dish have upped the price it’ll cost Tampa Bay to retain him in 2022. Zunino re-signed with the Rays on a one-year deal with a $4M club option this past offseason, but as Marc Topkin of the Tampa Bay Times points out, it was reported at the time of the deal that Zunino’s option would increase from $4M to $7M if he appeared in 100 or more games this season.
MLB・14 DAYS AGO
The Spun

If the Boston Red Sox are going to take down the New York Yankees in the American League Wild Card Game tonight, they’ll need to do it without star slugger J.D. Martinez. Martinez was not included on Boston’s roster for the AL Wild Card Game due to a sprained left ankle. He suffered the injury in the fifth inning of Boston’s regular-season finale on Sunday.
MLB・21 DAYS AGO

The Chicago White Sox were eliminated from the playoffs on Tuesday after losing Game 4 of their American League Division Series, 10-1, to the Houston Astros. The White Sox, specifically manager Tony La Russa, did not go quietly into the winter, however. Rather, La Russa made it clear that he...
MLB・13 DAYS AGO
FanSided

The Los Angeles Dodgers were in a load of trouble long before star third baseman Justin Turner collapsed in a heap, but the optics of his late-game injury certainly didn’t help matters in NLCS Game 4. After all, it’s difficult to muster up one more rallying cry when your de...
MLB・3 DAYS AGO
Larry Brown Sports

Baseball fans are about to see more of Joc Pederson over the next week as his Atlanta Braves get set to face the Milwaukee Brewers in the NLDS. There is something fans should know about him: he just started wearing a pearl necklace during games. Yes, beginning last week, Pederson...
MLB・20 DAYS AGO
FanSided

The Los Angeles Dodgers’ 2021 season ended with a thud. They had the highest of expectations coming into this year and, somehow, so many things went wrong. From Clayton Kershaw and Max Muncy going down right before the postseason to Trevor Bauer and Dustin May missing more than half the year to the San Francisco Giants coming out of nowhere to win 107 games, the Dodgers did their best to keep pace, but it wasn’t enough.
MLB・2 DAYS AGO

The opportunity was there. The Los Angeles Dodgers found a window despite swimming upstream throughout Game 6 of the NLCS. In the top of the seventh inning trailing 4-1, LA’s offense came to life. The first three batters reached base, they scored a run, and there were runners on second and third for Albert Pujols.
MLB・2 DAYS AGO
USA TODAY

The New York Yankees flamed out of the 2021 MLB postseason after getting wrecked by the Boston Red Sox in a 6-2 American League wild-card game loss at Fenway Park on Tuesday. The Yankees crashing and burning against their fiercest rival and despite a luxurious payroll only add fuel to an offseason that’s going to have them answering plenty of questions, including whether the team’s future would still include veteran outfielder Brett Gardner — at least until the end of the 2022 MLB season.
MLB・20 DAYS AGO
ClutchPoints

Shohei Ohtani recently put doubts on his future with the Los Angeles Angels after expressing his desire to win at the highest level. However, perhaps in a bid to stop the speculations from further spreading, he reiterated his love for the team. Per the Associated Press, Ohtani shared that he...
LOS ANGELES, CA・22 DAYS AGO

The Los Angeles Dodgers’ dramatic 2-1 victory over the San Francisco Giants in Game 5 of the National League Division
MLB・11 DAYS AGO
papercitymag.com

CHICAGO — Jose Altuve does not need a champagne bath. Or a big clubhouse party Right now, the man who powers baseball’s most underrated modern dynasty just wants a hug from his wife, So that is what Altuve looks for when he gets back onto the field after a spirited, but brief and anything but over-the-top Astros clubhouse celebration.
MLB・13 DAYS AGO
MassLive.com

A play made by Red Sox ball girl Camille Desrochers impressed Fenway fans and Houston Astros alike during during Game 5 of the ALCS. “There was a righty on the bat and I was like, ‘Well if it comes this way, I’m going to be ready to get it,” Desrochers told 7News. “And I just saw it, saw the umpire call foul, of course, wouldn’t want to touch a fair ball.”
MLB・4 DAYS AGO
NJ.com

Carlos Correa is going to get paid. It’s just a matter of how much the two-time All-Star will be offered. Correa headlines a bumper crop of free-agent shortstops, which also includes the Los Angeles Dodgers’ Corey Seager, Colorado Rockies’ Trevor Story and New York Mets’ Javier Baez. So what will...
MLB・12 DAYS AGO
New York Post

Just days after pulling off a clutch run in the ninth, the Los Angeles Dodgers were now victims of the same late-inning misfortune that they had previously benefitted from. After yet another late-inning base hit from Cody Bellinger, the Dodgers were set to have a runner in scoring position and Mookie Betts coming to the plate. Instead, Chris Taylor tried to go from first to third and got caught up in a rundown before being tagged as the inning-ending out.
MLB・9 DAYS AGO
The Spun

Justin Fields and the Chicago Bears had a pretty rough Sunday. Chicago was thumped by Tampa Bay, 38-3, at Raymond James Stadium. The Buccaneers improved to 6-1 on the season with the win, while the Bears dropped to 3-4. Fields, the rookie quarterback out of Ohio State, had his most-frustrating...
NFL・1 DAY AGO
WXIA 11 Alive

ATLANTA — The Atlanta Braves are headed to the World Series after finishing off the Los Angeles Dodgers on Saturday night with a 4-2 win to win the NLCS 4-2, as well. It's the first time in 22 years the Braves will appear in the Fall Classic. The last time...
MLB・2 DAYS AGO