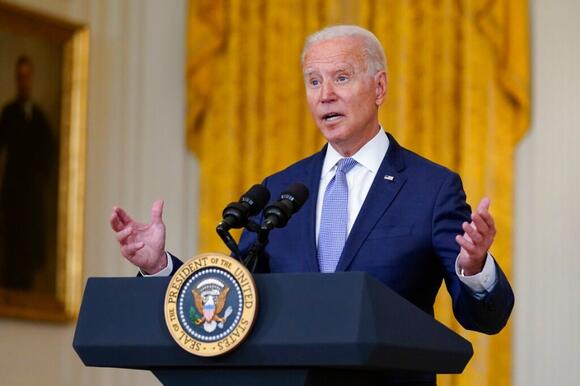 Gibbs, of Ohio’s Seventh Congressional District, said Biden is not fit for the job and is willfully violating the separation of powers.

“It’s clear with Nancy Pelosi as Speaker, the House will not hold President Biden accountable for his egregious violations of his constitutional duties. That shouldn’t stop Republicans from calling them out,” Gibbs said on his Facebook page.

“Between his willful negligence of the border crisis, his intentional actions on the unlawful eviction moratorium, and his shameful conduct in the Afghanistan withdrawal, it’s clear Biden is falling woefully short of his oath of office.”

The resolution is cosponsored by Republican Reps. Brian Babin and Randy Wester Sr., both of Texas, and Andy Biggs, of Arizona.

In early August, Gibbs wrote a letter urging the GOP to consider impeachment.

This is the second effort to unseat the president after Georgia Congresswoman Marjorie Taylor Greene filed articles of impeachment a day after Biden was sworn into office . That effort went nowhere in the Democrat-controlled House, and the same outcome seems likely this time.

Two people who helped plan the pro-Trump rallies that took place in Washington ahead of the Capitol riot on Jan. 6 say members of Congress and the White House helped plan the protest that turned violent.
WASHINGTON, DC・1 DAY AGO
KFOR

A government watchdog group said Friday that it had filed an ethics complaint against White House press secretary Jen Psaki for a comment she made about former Virginia Gov. Terry McAuliffe, a Democrat who is running for election to his old post.
U.S. POLITICS・9 DAYS AGO
KFOR

A couple has been arrested in connection to a case where an infant's remains were found in the trash 30 years ago in North Carolina.
OKLAHOMA COUNTY, OK・15 HOURS AGO
NBC News

WASHINGTON — The Senate confirmed two Republicans nominated by President Joe Biden to top diplomatic posts Tuesday. Former Arizona Sen. Jeff Flake was confirmed as U.S. ambassador to Turkey, and Cindy McCain, the widow of GOP Sen. John McCain of Arizona, will be the country's representative at the United Nations Agencies for Food and Agriculture.
CONGRESS & COURTS・9 HOURS AGO

WASHINGTON — A Republican secretary of state who challenged former President Donald Trump's false claims of election fraud in 2020 is the front-runner for a job heading the Biden administration's effort to protect future elections, according to people familiar with the discussions. Kim Wyman, 59, has led elections in Washington...
PRESIDENTIAL ELECTION・19 HOURS AGO
Newsweek

"This makes my blood boil," Representative Grace Meng said of a report that her Republican colleagues helped plan the protest before the January 6 insurrection.
NEW YORK CITY, NY・1 DAY AGO
The Independent

This week, there has been a lot of discussion about whether politicians might have helped to plan the January 6 rally that led to a violent insurrection at the Capitol, following the publication of an explosive article by Rolling Stone. The article claimed that people who organized the protest had participated in “dozens” of planning meetings “with members of Congress and White House staff”. And the way in which lawmakers have responded to such allegations is particularly telling.Alabama Representative Mo Brooks denied involvement, but then went on to say, “I don’t know if my staff did [help plan the rally].....
CONGRESS & COURTS・11 HOURS AGO
The Independent

Republican Alabama Congressman Mo Brooks has denied reports that he participated in the planning of the 6 January rally-turned-riot at the US Capitol – but also said he would be “proud” if his staffers had helped.Mr Brooks’ comments come after a devastating report by Rolling Stone alleged that right-wing lawmakers and White House staff helped to organise the events of 6 January in advance, meeting with grassroots planners who helped bring rioters to the building to stop the certification of Joe Biden’s victory.Citing two sources who are apparently communicating with the select committee investigating the insurrection, the magazine claims...
CONGRESS & COURTS・17 HOURS AGO

In their first two months in the White House, President Joe Biden and Vice President Kamala Harris were practically inseparable — Harris traveled with Biden to the Pentagon, sat in the Roosevelt Room when he met virtually with a foreign leader and delivered her own remarks on the administration’s priorities.
PRESIDENTIAL ELECTION・19 HOURS AGO
bpr.org

At the North Carolina State Fair this week, the state Republican P arty sold magnets with an unusual catchphrase: “Let’s go , Brandon ! ”. “I mean , they were just flying off the table,” said Sarah Newby, the N .C. GOP’s state finance chair. “And it was really cool to me to see how it was like ages from like 13 to like 90-year-old elderly women.”
PRESIDENTIAL ELECTION・1 DAY AGO
POLITICO

Rather than distance himself from a down-ballot race, the president has tied himself increasingly to it.
VIRGINIA STATE・18 HOURS AGO
POLITICO

It cites earlier rationale for rejecting claims in turning these new ones down. Here's the deal: President Joe Biden has rejected two additional requests by former President Donald Trump to shield sets of documents from the panel investigating the Jan. 6 insurrection, according to a new letter obtained by POLITICO.
PRESIDENTIAL ELECTION・1 DAY AGO

Democratic Speaker of the House of Representatives, Nancy Pelosi, He said Sunday that lawmakers from his party could compromise next week on the broader reforms that US President Joe Biden wants. “We are almost therePelosi told the CNN channel. Asked if an agreement would be reached in a week, he...
PRESIDENTIAL ELECTION・2 DAYS AGO
CNN

Joe Biden's presidency may be transformed by a week

(CNN) — Joe Biden is tantalizingly close to fulfilling what supporters see as the historic promise of his presidency in the coming days, at a critical moment for his social policy transformation at home and his hopes of reclaiming US leadership overseas. After weeks of feuding between moderate and progressive...
PRESIDENTIAL ELECTION・2 DAYS AGO
POLITICO

The president is scheduled to attend a United Nations conference on climate change on Monday and Tuesday of next week.
WHITE HOUSE, TN・6 HOURS AGO
CNBC

President Joe Biden will designate FCC acting Chair Jessica Rosenworcel as permanent chair and nominate her to another term on the commission, the White House said Tuesday. He also plans to name former FCC official Gigi Sohn to fill the agency's fifth commissioner slot and Alan Davidson of Mozilla as assistant secretary for communications and information at the NTIA.
PRESIDENTIAL ELECTION・14 HOURS AGO

"There's no off-ramp for Donald Trump that is gracious and empowers other Republicans behind him," David Jolly said Sunday.
PRESIDENTIAL ELECTION・2 DAYS AGO
AFP

President Joe Biden said Monday he hopes Democrats will strike a deal on two massive spending packages this week and make America the "most advanced country in the world" again. Speaking at the start of a crucial period for his presidency and the Democratic Party's wider fortunes, Biden urged a deal on a social spending bill expected to weigh in at a little less than $2 trillion and an infrastructure bill worth $1.2 trillion. He said he wanted a deal by the end of this week, when he flies to two summits in Europe. "That's my hope," he told reporters, adding that talks on Sunday with one of the main obstacles to agreement, moderate Democratic Senator Joe Manchin, "went well."
PRESIDENTIAL ELECTION・1 DAY AGO
Newsweek

(CNN) — President Joe Biden has once again refused to assert executive privilege over more documents that former President Donald Trump has sought to keep out of the hands of the committee investigating the January 6 attack on the US Capitol. According to a letter obtained by CNN, White House...
POTUS・1 DAY AGO