By Nathan Place
The Independent
25 days ago 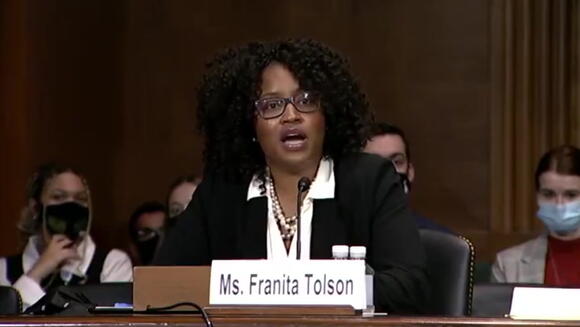 A bit of grandstanding by senator Ted Cruz appeared to backfire on Wednesday as three election experts flatly told him his state’s laws are racist.

“In your judgement, are voter ID laws racist?” the Texas Republican asked.

“It depends,” responded Franita Tolson, a professor at the USC Gould School of Law. “One thing we have to stop doing is treating all voter ID laws as the same.”

Mr Cruz did not let her elaborate, citing his limited time. Instead, he asked her which voter ID laws are racist.

“OK, so you think the entire state of Texas is racist?” the senator shot back.

Mr Cruz cut her off again.

“You tell me, what about the Texas voter ID law is racist?” he asked.

“The fact that the voter ID law was put into place to diminish the political power of Latinos, with racist intent,” she answered.

“You’re asserting that,” Mr Cruz said, cutting her off again. “What’s your evidence of that?”

“The federal district court that first resolved the constitutionality of Texas’ voter ID law,” she replied without missing a beat.

In 2017, Judge Nelva Gonzales Ramos of the US District Court for the Southern District of Texas ruled that Texas’ voter ID law – which requires voters to present a driver’s license or other identification to cast a ballot – violated the Voting Rights Act of 1965.

Texas’ voting rules are considered some of the strictest in the country, and the state recently passed a new law to make them even stricter. Experts, including the ones Mr Cruz faced off with, have said the rules have a disproportionate impact on voters of colour.

After his questioning of Ms Tolson, Mr Cruz appeared eager to move on to the next panelist. In quick succession, the next two gave him the same answer.

“There are some voter ID laws that are racially discriminatory in intent,” answered Thomas Saenz, president of the Mexican American Legal Defense and Educational Fund.

“How about in practice?” Mr Cruz asked.

“Yes,” Mr Saenz answered. “In effect, I think that there are discriminatory effects from a number of voter ID laws.”

The next two experts, however, gave Mr Cruz the opposite answer when asked if such laws are racist.

“No,” answered Hans von Spakovsky, manager of the Heritage Foundation's Election Law Reform Initiative, “particularly because every single state that has passed an ID law has put in a provision to provide a free ID to anyone who doesn't have one. The turnout numbers show it has no effect.”

Update, 23 September 2021: An earlier version of this article said the ‘entire’ panel Senator Cruz was addressing described Texas voter ID laws as racist. While three described the laws as racist, two other members of the panel disagreed.

Ted is a tool, how this guy continues to get people to drink his kool-aid in beyond anything I can comprehend. He's a minority and treats minorities like second rate citizens.... The canun the debacle says it all

Ted Cruz has been put on blast. If he were smart, he would've asked his two supporters this question first to save face. Don't care much for any turn coat.

Would have been more impressed with her argument if she had actually cited something more than "intent". Is it really much different than laws requiring people to show ID to buy alcohol? Is that discrimination against minorities? Is it racist?

Jimmy Kimmel on Wednesday managed to combine his two biggest comedic targets in a single joke: Halloween and Sen. Ted Cruz (R-Texas). “I hate Halloween,” Kimmel admitted, which might explain why he takes so much pleasure in one of the holiday’s longest-running pranks. Kimmel’s also not a fan of Cruz,...
CONGRESS & COURTS・5 DAYS AGO
San Antonio Current

For as busy as Sen. Ted Cruz keeps his thumbs, he just can't seem to catch a break on Twitter. When he's not getting his chops busted by celebrities he picks fights with, the Texas Republican is getting blowback from potential allies for, well, twisting the truth to fit his bullshit narrative.
WORLD・17 HOURS AGO
The Independent

An Australian state governor has lashed out at Texas senator Ted Cruz for his opposition to a strict new vaccine mandate, telling him: “You know nothing about us.”Michael Gunner, the chief minister of Australia’s Northern Territory, excoriated Texas’s record on protecting people from Covid-19 and and told him to keep his lectures to himself.The controversy-happy Republican had attacked Northern Territory’s uncompromising requirement that all workers who regularly deal with the public in person must get a first vaccine dose by 13 November or be barred from work and fined $5,000 Australian dollars (£2,700).Mr Cruz said last week: “I love...
PUBLIC HEALTH・10 HOURS AGO
Battalion Texas AM

The Oct. 14 Verdict podcast with Sen. Ted Cruz, Michael Knowles and Liz Wheeler, hosted at Rudder Theater, was a lot of things. It was a pep rally; it was a two-hour hate; it was a call to arms against an enemy. This adversary is all-deceiving yet completely see-through, both collective and individual, powerful and weak. It’s everyone’s favorite villain — the media. From the beginning of the podcast to its end, a wide variety of topics garnered a cacophony of hisses, even turning Aggie against Aggie.
U.S. POLITICS・1 DAY AGO

Ted Cruz, an individual constantly surrounded by controversy, has a job in Washington D.C. representing the people of Texas, but he is also trying to work as a recruiter of players for the Houston Rockets, unsurprisingly, he’s not so good at it…. Sean Marks, the general manager of the Brooklyn...
NBA・4 DAYS AGO
WISN

MADISON, Wis. — Texas Republican Sen. Ted Cruz is no stranger to controversy. And controversy is what his Wednesday night event in Madison produced. The event, sponsored by Young America’s Foundation where former Wisconsin Gov. Scott Walker is president, abruptly moved from the UW-Madison campus to the Masonic Center after the university denied an exception for Cruz and his co-host to be maskless during the event.
MADISON, WI・5 DAYS AGO
Newsweek

Senator Ted Cruz (R-TX) appeared to support a Republican attack on President Joe Biden's decision to go on vacation by bringing up his own controversy-hit Cancun trip. The firebrand Republican shared an official GOP tweet on Saturday that lashed out at President Biden for taking a weekend trip to Delaware for the Columbus Day weekend.
CONGRESS & COURTS・8 DAYS AGO
MSNBC

Southwest Airlines did not have a good weekend. A combination of some weather disruptions and air-traffic-control issues in Florida cascaded into hundreds of delayed and canceled flights. Ordinarily, this wouldn't be especially notable. By Tuesday, the mess was largely resolved; stranded passengers were rebooked; Southwest's CEO issued an apology; and...
CONGRESS & COURTS・5 DAYS AGO

Comedian Aidy Bryant mocked Texas Senator Ted Cruz again in the latest episode of Saturday Night Live. In the opening skit for its October 9 episode, the SNL cast recreated the Facebook whistleblower hearing last Tuesday when Frances Haugen testified before a Senate panel on October 6. She told lawmakers they must intervene to solve the "crisis" created by her former employer's products, according to the New York Times.
CONGRESS & COURTS・7 DAYS AGO
Insider

Sen. Ted Cruz shamelessly mocked Biden for going on 'vacation' by dredging up controversial Cancun trip, which he took during Texas crisis

"Cancun is lovely this time of year," Sen. Cruz responded to a tweet from Republicans about President Biden going "on vacation" to his home state Delaware.
TEXAS STATE・8 DAYS AGO
HuffingtonPost

Sen. Ted Cruz (R-Texas) was slammed by critics over the weekend for cracking a joke about his controversial Cancun getaway to attack President Joe Biden for taking a weekend trip to Delaware. Biden often returns to his home state for weekends, an observation that the GOP Twitter page criticized as...
CONGRESS & COURTS・8 DAYS AGO

US Senator, Ted Cruz, has proposed using natural gas to mine bitcoin instead of this energy going to waste. The senator stated that crypto-mining could help to monetise energy generated through oil and gas mining activities. The senator was giving a speech during the Texas Blockchain Summit held on October...
CONGRESS & COURTS・7 DAYS AGO
Business Insider

"Abolish the police" is an activist slogan, not a policy embraced by elected Democrats. In New York City, for example, the police budget is once again on the rise. Police reform is popular. Activist slogans are not. Some Republicans want to conflate the two. At a hearing last month, Sen....
CONGRESS & COURTS・11 DAYS AGO
WashingtonExaminer

Ted Cruz thanks 'God' after reports that Zodiac Killer identified

The senator from Texas is off the hook, and he's thanking God.
CONGRESS & COURTS・11 DAYS AGO
themissouritimes.com

Texas Senator Ted Cruz endorsed Sen. Eric Burlison in his bid for Missouri’s 7th congressional district this week. “For Missouri’s Seventh Congressional District, I am proud to offer my endorsement and support to Eric Burlison, and I am asking you to join me in supporting him,” Cruz, a 2016 Republican presidential contender, said in an email to supporters Tuesday. “Eric will take on the DC swamp and fight for our conservative values.”
CONGRESS & COURTS・13 DAYS AGO

COLLEGE STATION, Texas — On October 14, Senator Ted Cruz will be speaking at the Rudder building on the Texas A&M University campus. The last time Cruz was at Texas A&M was on September 8 when he traveled to the Bush School of Government and Public Service. Now, the Young Americans for Freedom Chapter at Texas A&M will be hosting the politician that evening on campus.
COLLEGE STATION, TX・14 DAYS AGO
Washington Examiner

Democrats have found their “anti-Rubio warrior” in Florida’s Senate race, according to Politico. But in Rep. Val Demings, what they have actually found is yet another money furnace that will deliver a disappointing loss when the votes are counted. Politico’s piece details that Demings, the Democratic challenger to Sen. Marco...
FLORIDA STATE・13 HOURS AGO
mediaite.com

On Sunday night Sen. Ted Cruz (R-TX) baselessly blamed the hundreds of canceled Southwest Airlines flights on the company’s imposition of a Covid-19 vaccine mandate on its employees. The company’s CEO has said he is personally opposed to the mandate, but that his hand has been forced by the Biden administration policy requiring companies such as Southwest that do business with the federal government vaccinate their employees.
CONGRESS & COURTS・6 DAYS AGO