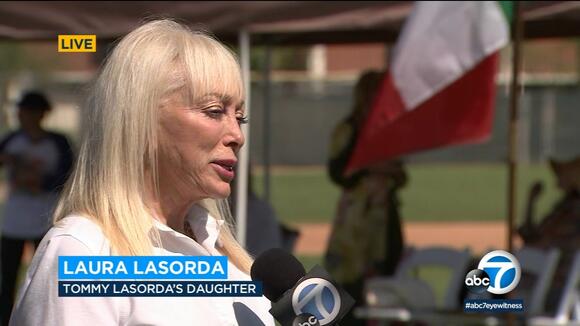 Tommy Lasorda's daughter Laura spoke to ABC7 about the love her parents shared as she celebrated Tommy Lasorda Day in Fullerton. Jo Lasorda, widow of the former Los Angeles Dodgers manager, died Monday night at her Fullerton home at the age of 91. Tommy Lasorda died in January at the age of 93. The two had been married for 70 years. "The eight or nine months they were apart, I think that this is the best birthday present that my father could get, is having my mother by his side in heaven," she said. "The two of them really did walk hand in hand all those years, never in front, never behind, always together."

The late Tommy Lasorda would have turned 94 on Wednesday. He spent nearly 70 years living in Fullerton with his wife, Jo, who passed away Monday night. The city honored the legendary Dodgers manager by declaring the day Tommy Lasorda Day.

Third baseman Justin Turner is not in the Dodgers' lineup for Game 2 of the NL Championship Series because of a stinger on the right side of his neck.
MLB・13 HOURS AGO
ABC7

The Dodgers fell into a 0-2 hole against the Braves in the NLCS after a heartbreaking 5-4 loss in Sunday's Game 2.
MLB・7 HOURS AGO
ABC7

He sided with the Giants ahead of Thursday night's game in a friendly Twitter bet with Sen. Alex Padilla. Here's what the loser has to do next.
LOS ANGELES, CA・2 DAYS AGO
ABC7

It was a 130-year rivalry that came to a head in a nail-biter of a game, as the Dodgers beat the Giants 2-1 Thursday night to advance to the NLCS.
MLB・3 DAYS AGO