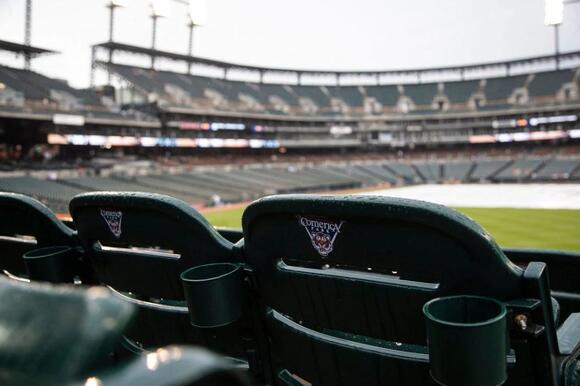 Wednesday afternoon’s scheduled series finale in Detroit between the Tigers and Chicago White Sox has been postponed due to inclement weather.

The game will be made up Monday at 1:10 p.m. ET, a previously scheduled day off for both teams. The Tigers won the first two games of the series.

The postponement means the White Sox (85-66) will have to wait at least one more day to clinch the American League Central division. Their magic number is two over the Cleveland Indians (74-76), who play the Kansas City Royals (69-83) on Wednesday.

The White Sox will head to Cleveland to open a five-game series on Thursday. The Tigers (74-78) host the Royals in a three-game series beginning Thursday.

The Chicago White Sox were eliminated from the playoffs on Tuesday after losing Game 4 of their American League Division Series, 10-1, to the Houston Astros. The White Sox, specifically manager Tony La Russa, did not go quietly into the winter, however. Rather, La Russa made it clear that he...
MLB・13 DAYS AGO
FanSided

The Chicago White Sox had a very good season with all things considered. They went in with mixed expectations after being a playoff team in the short (60 games) COVID-19 season. After a 93-69 season, they went into the playoffs as the American League Central Division champions. All of that happened with many different injuries hurting them throughout the season.
MLB・12 DAYS AGO
FanSided

On this week’s Tigers Tidbits, MLB Insider Jon Heyman makes his prediction on who the Detroit Tigers will land this off-season and a recap of this week’s AFL action. As the World Series is set to start this week, the hot stove is already cooking up predictions on what free agent will land where including one that seems pretty clear to Detroit Tigers fans. We will also take a look at the AFL action over the weekend as one position player had a solid weekend. Here is this week’s Tigers “Spooky Tidbits”.
MLB・2 DAYS AGO
FanSided

Chicago White Sox: Nick Castellanos would be perfect in 2022

Outside of being a part of one of the funniest baseball memes on the internet, Nick Castellanos is also a very good baseball player. He has spent time with the Cincinnati Reds, Chicago Cubs, and Detroit Tigers in his MLB career. Now, there is a good chance that he searches for a new home and the Chicago White Sox would be a perfect fit.
MLB・5 DAYS AGO

Jose Altuve had an epic slide into home plate for the Houston Astros in Game 1 of the ALDS. The Houston Astros and the Chicago White Sox are battling in Game 1 of the ALDS at Minute Maid Park, except right now it’s not much of a battle. The game is unraveling quickly for the White Sox, while everything is going right for the Astros. Houston’s second baseman Jose Altuve had an incredible slide into home plate that resulted in him completely avoiding Chicago’s catcher Yasmani Grandal.
MLB・19 DAYS AGO
houstonianonline.com

Game 4 of the ALDS goes down between the Astros and the White Sox on Tuesday at a guaranteed rate field in Chicago. The match was originally scheduled for Monday. But the stormy weather postponed it for a day. The Astros lead the best of five series 2-1, which means this is an elimination game for the White Sox. If the Astros win on Tuesday, they will advance to face the Red Sox in the ALCS. If the White Sox takes it, the two teams will play a crucial Match 5 again in Houston on Wednesday night. The basics of this:
MLB・14 DAYS AGO
ABC 7 Chicago

One White Sox gan has followed through on a permanent promise after the team's Game 3 victory over the Houston Astros.
MLB・14 DAYS AGO
ABC 7 Chicago

One White Sox super fan credited for maybe working his magic to help keep the team alive in the ALDS against the Houston Astros.
MLB・14 DAYS AGO

The Chicago White Sox went in 2021 with mixed expectations. They made the postseason in 2020 but they weren’t division champions. It was also only a 60 game season due to COVID-19 so nobody knew what to expect from them in a full year. Well, after going 93-69, they won the American League Central Division with relative ease. It was a big step towards the ultimate goal of winning the World Series with this core.
MLB・14 DAYS AGO
USA TODAY Sports Media Group

The Houston Astros and Chicago White Sox continue their best-of-five AL Division Series Tuesday with a 2:07 p.m. ET first pitch at Guaranteed Rate Field. Let’s analyze the lines around the Astros vs. White Sox odds with MLB picks and predictions. RHP Lance McCullers Jr. is the projected starter for...
MLB・15 DAYS AGO
937theeagle.com

The Houston Astros advanced to their fifth consecutive American League Championship Series on Tuesday by beating the Chicago White Sox 10-1 in Game 4 of their best-of-five division series matchup. The Astros are the third team ever to appear in five straight league championship series, and first to do so...
MLB・14 DAYS AGO
ABC13 Houston

Houston and Chicago's "Southsiders" now have more on the line as the ALDS resumes today to make up the rained out Game 4 from Monday.
MLB・14 DAYS AGO
NBC Chicago

Sox fail own World Series mission, end '21 in disappointment originally appeared on NBC Sports Chicago. From the start of spring training, it was "World Series or bust." The Chicago White Sox were eliminated from the postseason Tuesday afternoon, their stay there this fall just one game longer than it was a year ago. The Houston Astros continued their streak of reaching the American League Championship Series, while the White Sox looked the part of a team still trying to catch up with the big boys in a 10-1 blowout defeat in Game 4 of the AL Division Series.
MLB・14 DAYS AGO
vavel.com

The Chicago White Sox have cut the Houston Astros lead in the American League Division Series to 2-1 with a 12-6 victory at Guaranteed Rate Field. Dylan Cease was knocked out after 1 2/3 innings, allowing three runs. Tyler Kopech also allowed three runs, but picked up the win. Astros...
MLB・13 DAYS AGO
670 The Score

In a memorable season, White Sox fail to meet their World Series standard

CHICAGO (670 The Score) -- When the final out was recorded and the World Series dream had died, the collective energy once carried by more than 40,000 strong at Guaranteed Rate Field was reduced to just the visitors celebrating on the field. After embracing championship expectations, the White Sox saw...
MLB・14 DAYS AGO
Newsweek

The crowd at Guaranteed Rate Field in Chicago was estimated to be at least 40,000 strong.
MLB・14 DAYS AGO
ESPN

The Houston Astros advanced to their fifth consecutive American League Championship Series on Tuesday by beating the Chicago White Sox 10-1 in Game 4 of their best-of-five division series matchup. The Astros are the third team to appear in five straight league championship series and the first to do so...
MLB・14 DAYS AGO
Simplemost

A White Sox fan and her friends used her prosthetic leg to catch a ball while attending a game in Chicago earlier this month. Shannon Frendreis shared a video of the incredible catch on social media, including TikTok, where it quickly went viral. Five beers in, and taking my leg...
MLB・13 DAYS AGO
fox32chicago.com

A White Sox fan aptly sums up the mood after a season ending 10-1 loss to the Astros. For a team that brought so much joy this season, there was a funereal feel as White Sox fans filed out of Guaranteed Rate Field Tuesday evening. "I was hoping they would...
MLB・14 DAYS AGO
FanSided

Tim Anderson of the Chicago White Sox may not have a vast amount of postseason experience, but numbers show that he is making an impact at the plate in every playoff appearance. Heading into Tuesday’s Game 4 of the American League Division Series between the Chicago White Sox and Houston...
MLB・15 DAYS AGO