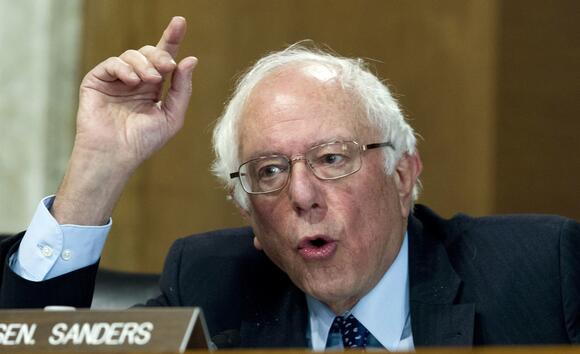 “The House of Representatives should wait to pass the bipartisan infrastructure bill,” Senate Budget Committee Chairman Bernie Sanders and 10 other liberal Democrats said in a statement Wednesday.

COVID CLUSTER OUTBREAKS COULD SIGNAL PANDEMIC IS NEARING THE END

The House plans to take up the infrastructure package next week. The $1.2 trillion measure provides funding for roads, bridges, water projects, and expanded broadband. It passed the Senate with bipartisan support earlier this summer.

President Biden is eager to sign it into law, and doing so would provide a much-needed legislative victory for the party and his administration. Polls indicate that infrastructure spending enjoys significant public support.

But Sanders and other liberal Democrats say the move would undercut a deal to consider the infrastructure bill on a dual track with a $3.5 trillion social welfare spending package that is struggling to win the backing of party centrists.

House liberals are now threatening to block the infrastructure package from passing next week. Sanders and his liberal Senate colleagues encouraged them to vote against it.

“This is what we agreed to, it’s what the American people want and it’s the only path forward for this congress,” the group said in a statement.

Sanders was among a group of centrist and liberal Senators slated to meet with Biden Wednesday to try to broker a deal on the social welfare spending package. Centrists want to lower the cost and make changes to plans to raise taxes and negotiate prescription drug prices.

Democratic leaders could not provide a time frame for when the legislation might be ready for consideration.

The Senate Democrats said in the statement the party must stick together to ensure both bills pass, not just the infrastructure bill.

“We voted for the bipartisan bill with the clear commitment that the two pieces of the package would move together along a dual track,” the senators said in the statement. “Abandoning the $3.5 trillion Build Back Better Act and passing the infrastructure bill first would be in violation of that agreement.”

The United States doesn't need anymore social welfare. It is already out of control. Expel those illegals trespassing in the United States. They are owed nothing.

College shouldn't be free, as long as government funding it, the price will skyrocket.we have enough welfare programs and child tax credit, I raise mine without any.The only thing they need to do with Medicare, is help with cost of medication. Senior deserve Medicare, because we have been paying into it for years. Free health care isn't going to work, people need to decide what more important health care insurance or other things.

Washington in recent weeks failed to enact a bipartisan infrastructure bill, and it came up with only short-term fixes to avoid a U.S. default and prevent a partial government shutdown. So Congress and the White House will have to tackle all of those topics again in the weeks ahead, along with other issues.
WASHINGTON STATE・23 HOURS AGO
POLITICO

In a letter to House Speaker Nancy Pelosi, the lawmakers say they first want to see how other countries implement a new agreement to create a global minimum tax on multinationals.
WASHINGTON, DC・17 HOURS AGO
Business Insider

The poll also found that Sinema would lose overwhelmingly to a variety of potential Democratic challengers, including Rep. Ruben Gallego.
PRESIDENTIAL ELECTION・1 DAY AGO
Markets Insider

Progressives revolted the last time Nancy Pelosi tried to hold a vote on the roads-and-bridges bill, but Sinema seems determined for it to pass first.
CONGRESS & COURTS・1 DAY AGO

Progressive Caucus Chair Congresswoman Pramila Jayapal maintains that child care, Medicare expansion, prescription drug price limits, climate change, immigration, and affordable housing will remain in the slimmed-down social spending bill being negotiated between the White House and congressional Democrats. But she concedes some programs may have to be altered. "Those...
CONGRESS & COURTS・1 DAY AGO
CBS News

House Majority Whip Jim Clyburn says Democrats are modifying the Build Back Better Act, Democrats' massive social spending bill with care, as they try to forge a compromise acceptable to both moderates and progressives in the party. "We'll trim it down very very carefully — and with a whole lot...
CONGRESS & COURTS・1 DAY AGO
Markets Insider

Sinema is fundraising abroad while talks around President Joe Biden's spending plan stall in part over her opposition to tax hikes.
PRESIDENTIAL ELECTION・1 DAY AGO
Newsweek

A top-ranking House Democrat is giving the Office of Management and Budget an extra nudge to make demographic data collection within the federal government more of an urgent government priority. Without better data on the members of the public using government services, agencies can’t make much progress on a January...
CONGRESS & COURTS・20 HOURS AGO
WEHT/WTVW

Progressives press for climate reforms to stay in spending package

Democrats are going toe-to-toe to try and get their policies inside President Joe Biden's final Build Back Better plan.
U.S. POLITICS・21 HOURS AGO
Reuters

WASHINGTON, Oct 14 (Reuters) - U.S. Senator Kyrsten Sinema, a key moderate, told fellow Democrats in the House of Representatives this week that she will not vote for a multitrillion-dollar package that is a top priority for President Joe Biden before Congress approves a $1 trillion infrastructure bill, according to a source briefed on the meeting.
PRESIDENTIAL ELECTION・1 DAY AGO
NPR

Senate Majority Leader Chuck Schumer, D-N.Y., is calling on Democrats to work together to pass a major spending package before the end of this month as part of a broader push to advance major elements of President Biden's domestic agenda. In a letter sent Thursday to Senate Democrats, Schumer says...
PRESIDENTIAL ELECTION・1 DAY AGO

Senate Democrats are set to try again to advance a sweeping elections and voting overhaul bill, testing objections from Republicans with a vote planned for next week, Majority Leader Chuck Schumer announced Thursday.In a letter to colleagues, Schumer, D-N.Y., said Republicans “must come to the table” to at least open debate on the bill. Weeks in the making, the new version was drafted in hopes of winning over support at a time when states continue mounting obstacles to voting.If the Republican senators have ideas “on how to improve the legislation, we are prepared to hear them, debate them, and...
CONGRESS & COURTS・1 DAY AGO
CNN

(CNN) — The two leading Democratic moderates made clear to their colleagues this week that a deal on the party's sweeping economic package is far from secured, raising new questions about the fate of President Joe Biden's first-term agenda, according to sources familiar with the matter. Among the red flags:...
PRESIDENTIAL ELECTION・1 DAY AGO
Markets Insider

Democrats are fuming at harsh cuts Manchin and Sinema want in Biden's social-spending bill. Some are floating another Democratic-only bill next year.
CONGRESS & COURTS・2 DAYS AGO
HuffingtonPost

Senate Democrats are planning a test vote on their revamped voting rights legislation next week, setting up a clash over the future of the filibuster. In a letter sent Thursday to his colleagues, Senate Majority Leader Chuck Schumer (D-N.Y.) said he plans to bring up the Freedom to Vote Act for a vote on Wednesday. The legislation was crafted in part by Sen. Joe Manchin (D-W.Va.), who opposed a previous, broader version of the bill.
CONGRESS & COURTS・1 DAY AGO

Congressional Democrats, concerned over lukewarm public enthusiasm for their massive social welfare spending package, may be forced to modify a tax-raising provision that has prompted significant backlash.
CONGRESS & COURTS・2 DAYS AGO
Connecticut Mirror

House, Senate Democrats at odds over whether to slash paid leave plan

The Senate and House committees with jurisdiction have been at odds over spending $300 billion or $494 billion, respectively, on the program for a while, a source familiar with the conversations said.
CONGRESS & COURTS・2 DAYS AGO
WOOD TV8

Progressive leaders in Congress are warning colleagues against a “false choice” over what to keep or cut as Democrats scale back President Joe Biden's now-$2 trillion package of social services and climate change strategies.
INCOME TAX・2 DAYS AGO