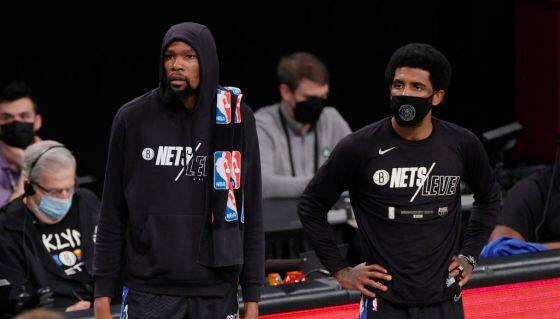 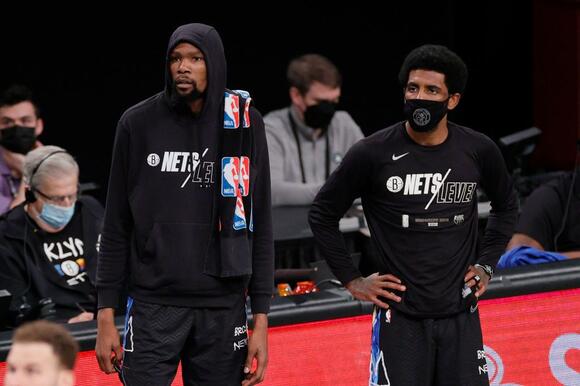 The 2021-2022 NBA Season is quickly approaching and we have some important questions left unanswered. Ben Simmons has reportedly gone on record stating that he will not play another game as a Sixer and wants to be traded elsewhere. The problem with that is…who wants to take Ben after his horrible showcase of skills in his last season? While he has the people’s agent Rich Paul , this solution may not be something that pleases all parties.

Shortly after, a rumor started circulating on Twitter claiming Kyrie Irving would reportedly retire if he was traded from the Brooklyn Nets. Many fans were left confused because Brooklyn had a great year and no one can understand the thought process of trading Kyrie after one full season with Kevin Durant . According to Stephen A Smith, the trade between Ben Simmons and Kyrie Irving was a done deal–but one person wasn’t having that trade go down: Kevin Durant.

Stephen A says with all confidence that if not for KD, Kyrie would be in Philly as we speak. You can listen to Stephen A Smith break it down for Kendrick Perkins below.

Blake Griffin and Isaiah Stewart fight was one of the most looked upon moments from the Nets vs Pistons most recent clash. With game being as tight and as compact as it was, Nets’ big man Blake Griffin and Pistons’ Center Isaiah Stewart were almost on the verge of throwing hands at one another, but it seemed like after the initial contact the former player decided to pull out of the action, giving more importance of his presence on the court.
NBA・25 DAYS AGO
Larry Brown Sports

The brief glimmer of hope for Kyrie Irving to return to the court for the Brooklyn Nets this season seems to be fading away. New York City mayor-elect Eric Adams appeared Friday on CNN and was asked specifically about Irving, who remains ineligible to play due to the city’s COVID-19 vaccine mandate.
NBA・25 DAYS AGO
Sports Illustrated

The Golden State Warriors crushed the Brooklyn Nets 117-99 on Tuesday night to improve to a 12-2 record, which is the best in the NBA. Meanwhile, the Nets fell to 10-5, (but they did rebound on Wednesday night beating the Cleveland Cavaliers 109-99 to improve to 11-5). Kevin Durant was...
NBA・12 DAYS AGO
NBA Analysis Network

This Clippers-Nets Trade Is Headlined By Kyrie Irving To L.A.

After some shaky performances at the beginning of the 2021-22 NBA season, the Brooklyn Nets have started finding their footing. The team is now 12-5, tied with the Chicago Bulls for the best record in the Eastern Conference, after winning 10 out of their last 12 games. Kevin Durant is...
NBA・8 DAYS AGO

The Philadelphia 76ers continue to deal with drama surrounding Ben Simmons and there does not appear to be an end in sight. Daryl Morey and the Sixers’ front-office have not changed their minds on the fact that they want an All-Star-level player for Simmons in a trade, but no team in the NBA has been willing to pay their price to this point.
NBA・13 DAYS AGO
fadeawayworld.net

In the NBA there is a lot of player movement. We see players switch teams relatively often, with them choosing new destinations for free agency, or perhaps getting traded by their franchise. In particular, star players enjoy a lot of mobility and freedom of movement, and we've seen many stars force their way out of franchises before.
NBA・26 DAYS AGO
FastBreak on FanNation

Steve Nash spoke about Kyrie Irving before the Nets lost to the Golden State Warriors in Brooklyn on Tuesday night.
NBA・13 DAYS AGO
fadeawayworld.net

Stephen A. Smith Says Kevin Durant Should Request A Trade Because Kyrie Irving Has Betrayed Him

It is no secret that the Brooklyn Nets have had a rather disappointing start to their 2021-22 campaign without Kyrie Irving. Kevin Durant has been exceptional for the Nets, but his efforts alone will not be enough if they hope to contend for the 2022 title. Stephen A. Smith has...
NBA・8 DAYS AGO

The Boston Celtics are reportedly interested in a major NBA trade, according to The Athletic. The Philadelphia 76ers continue to hold onto Ben Simmons, though the former No. 1 overall NBA Draft pick has yet to suit up in a game this season. Simmons is reportedly not mentally ready to...
NBA・22 DAYS AGO
The Big Lead

The Golden State Warriors came into Brooklyn and clowned the Nets last night. Stephen Curry laced up his sneakers and delighted in draining nine three-pointers in the blowout. Kyrie Irving was, once again, not present due to Reasons. A growing conversation about Kevin Durant having buyer's remorse in the running mate department grew a bit louder because how could it not? One elite guard is slightly less complicated and mercurial than the other. One elite guard is always available while the other can be off on a personal vision quest at any given moment.
NBA・13 DAYS AGO
ClutchPoints

Currently at 10-4, the Brooklyn Nets have been relatively impressive to start the 2021-22 campaign. However, you can also argue that this powerhouse team has yet to live up to the lofty expectations many had on them before the start of the season. What cannot be denied right now is...
NBA・14 DAYS AGO
fadeawayworld.net

Kevin Durant And James Harden Comment After The Nets-Warriors Game: "It's Only Going To Get Better From Here."

The Brooklyn Nets have recently lost to the Golden State Warriors by getting beat 117-99. There's no doubt that the Brooklyn Nets have to improve, and while they are obviously a good team, there's clearly work that needs to be done. Kevin Durant spoke after the game and claimed that...
NBA・13 DAYS AGO

Black don’t crack unless you’re Kevin Durant who doesn’t appear to have ever used lotion (ever) based on his disrespectfully ashy legs that sparked hilarious chaos across the internet. Known for his disinterest in hair grooming, it wasn’t shocking that the Brooklyn Nets power forward was caught with the most...
NBA・7 DAYS AGO
Sportsnaut

Bookmark. Save. Do your thing. We will be providing constant updates on this page as it relates to the biggest
NBA・1 DAY AGO
fadeawayworld.net

The Last 40 Scoring Champions: Michael Jordan Is The Best Scorer In NBA History

The scoring rate in the NBA these days is at an all-time high, as teams are focusing on efficient ways of scoring a ton of points. Of course, we have some of the most spectacular offensive players of all time including James Harden, Kevin Durant, and Stephen Curry playing at MVP levels every year. For the best scorers, winning scoring titles comes naturally to them because of how effortlessly they get buckets.
NBA・8 DAYS AGO
NBA Analysis Network

The Brooklyn Nets have begun the 2021-22 NBA season 10-4 and they look like one of the best teams in the league even though Kyrie Irving has not played at all. Irving is currently sitting out due to COVID-19 vaccine mandates in New York City and while he can practice with the team and play in road games, the Nets have made it clear that this will not be the case with their All-Star.
NBA・13 DAYS AGO
ClutchPoints

The Brooklyn Nets have raced out to an early 12-5 start, the best record in the Eastern Conference. This despite Kyrie Irving still having zero involvement with the team thus far after his offseason vaccination drama. Nets head coach Steve Nash was vocal on the team learning to play without...
NBA・11 DAYS AGO
libertyballers.com

Report: There are 30 players who would satisfy Sixers in potential Ben Simmons trade

In the latest Ben Simmons update from The Athletic’s Sam Amick, we’ve received one particularly interesting nugget of information regarding the number of players the Sixers would be happy to receive in a Simmons trade. After mentioning obvious stars we’ve already been talking about for months such as Damian Lillard,...
NBA・12 DAYS AGO
FastBreak on FanNation

Kyrie Irving of the Brooklyn Nets sent out three tweets on Monday.
NBA・8 DAYS AGO
FastBreak on FanNation

Stephen A. Smith Went Off On Kevin Durant, Kyrie Irving And The Broo Nets After Their Loss To The Warriors

ESPN's Stephen A. Smith had some strong words for Kevin Durant, Kyrie Irving and the Brooklyn Nets after they lost to the Golden State Warriors.
NBA・12 DAYS AGO