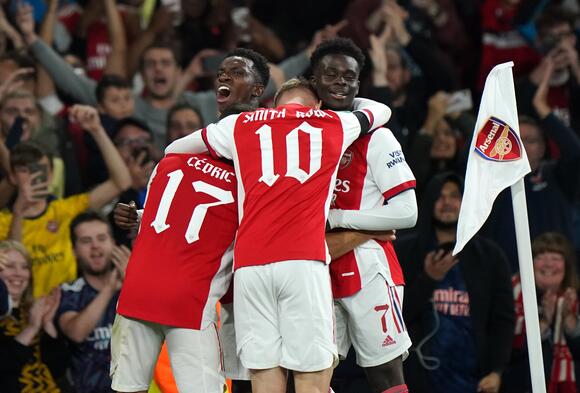 Arsenal eased into the fourth round of the Carabao Cup with a comfortable victory over spirited League One side AFC Wimbledon .

The Gunners have returned to winning ways of late and Mikel Arteta would have been pleased to see his side add goals to their recently-discovered guile with this 3-0 victory.

It took them until the latter stages to do so, however, with Alexandre Lacazette ’s early penalty not built on until the final 13 minutes when substitute Emile Smith Rowe and Eddie Nketiah wrapped up Arsenal’s place in the next round.

This was a chance to give much-needed game time to the likes of Lacazette, Nketiah and Gabriel Martinelli and, in the main, Arteta’s fringe players did well.

Arteta insists Lacazette can play a key role for Arsenal this season despite limited opportunities and his contract expiring next summer.

The Frenchman captained the side and was the man to make the breakthrough in the 11th minute, coolly slotting home from the penalty spot after Martinelli had been felled by Nesta Guinness-Walker.

If those inside the Emirates Stadium expected the floodgates to open at that point they would have been disappointed, Nik Tzanev in the Wimbledon goal going largely untroubled for the remainder of the first-half.

The visitors held their own without truly testing Bernd Leno , back in the Arsenal side having lost the gloves to summer signing Aaron Ramsdale.

The former Wimbledon goalkeeper was not even among the substitutes as Arteta made 10 changes, only Thomas Partey retained from the weekend win at Burnley as he continues to build up fitness ahead of the north London derby.

The Ghana midfielder came close to doubling Arsenal’s lead with a drive from the edge of the box which Tzanev pushed behind on the hour, with Partey making way shortly after.

Nuno Tavares saw a back-post header kept out by Tzanev as the hosts pushed for the goal to kill off the tie but Wimbledon were defending resolutely in numbers – repelling most balls in and around their box.

They could not set up a grandstand finish, however, Arteta throwing on Bukayo Saka for Martinelli with the England man immediately involved in the attack which saw Smith Rowe double the lead.

The result was put beyond doubt just three minutes later, Saka again involved as he worked the ball wide for Cedric Soares to cross and Nketiah to flick in with aplomb.

Ethan Chislett headed wide when he should have done better as the visitors chased a consolation before Saka arrowed a shot inches wide and drew a late save out of Tzanev as Arsenal progressed.

Former Arsenal shot stopper David Seaman is backing them to defeat Crystal Palace on Monday. The Gunners take on club legend Patrick Vieira, who is the Palace manager. Seaman may have a soft spot for Palace while they are managed by his former teammate, but he believes the Frenchman will have a hard time besting Mikel Arteta's Gunners on Monday.
PREMIER LEAGUE・8 DAYS AGO
newschain

Mikel Arteta praised the collective performance from his Arsenal side in their comfortable win over Aston Villa – insisting any player could have been named man of the match. The Gunners were the better side throughout and thoroughly deserved their 3-1 victory. Thomas Partey got the ball rolling with his...
PREMIER LEAGUE・3 DAYS AGO
Tribal Football

Arsenal manager Mikel Arteta believes his side showed their level in an impressive home win over Aston Villa. The Gunners were superb in an attacking sense, blitzing Villa and putting the result beyond doubt. Arteta was delighted with the result, especially after a poor home draw against Crystal Palace on...
PREMIER LEAGUE・1 DAY AGO
The Independent

Mikel Arteta has backed Eddie Nkeitah to become a “top, top player” and is hoping that will be at Arsenal after he struck in the Carabao Cup fourth-round win over LeedsThe Gunners secured a 2-0 victory as Calum Chambers scored just 21 seconds after coming off the bench before former Leeds loanee Nketiah tapped in.It was just the 22-year-old’s second appearance of the season, his first coming in the third-round success over AFC Wimbledon and he is out of contract in the summer.England’s all-time record goalscorer at Under-21 level saw a move to Crystal Palace break down in the...
PREMIER LEAGUE・26 MINUTES AGO

Rio Ferdinand has blasted Manchester United's lack of 'unity' and pressing ability after a hugely disappointing 4-2 defeat against Leicester on Saturday. The Red Devils were outclassed, outfought and outplayed as Brendan Rodgers' side took a fully deserved three points at the King Power. And iconic former defender Ferdinand declared...
PREMIER LEAGUE・8 DAYS AGO
newschain

A spirited fightback from AFC Wimbledon ensured the points were shared as Sheffield Wednesday squandered a two-goal lead in a 2-2 draw at Plough Lane. Despite the home side edging the early stages, it was the visitors who took the lead when Lee Gregory latched on to Barry Bannan’s ball before curling a left-footed shot past Nik Tzanev from just outside the area.
SOCCER・10 DAYS AGO
ESPN

USWNT star Tobin Heath was on target as Arsenal made light work of their Women's Champions League group-stage match against Hoffenheim, winning 4-0 at Meadow Park, Borehamwood. - Stream FC Daily on ESPN+. Heath, 33, joined Arsenal at the start of the Women's Super League season last month and finally...
SOCCER・11 DAYS AGO
The Independent

Manchester United have crashed to an embarrassing 5-0 defeat to Liverpool to pile the pressure on manager Ole Gunnar Solskjaer.Mohamed Salah scored a hat-trick at a shellshocked Old Trafford, with some home fans having already left before a miserable afternoon was made worse by the dismissal of half-time substitute Paul Pogba for a foul on Naby Keita.Here, the PA news agency charts eight other heavy losses United have suffered in the Premier League.Newcastle 5 Manchester United 0, October 20, 1996Philippe Albert’s stunning lob over Peter Schmeichel capped a thumping win as Kevin Keegan’s men gained some revenge having lost the...
PREMIER LEAGUE・2 DAYS AGO

AFC Wimbledon have decided against signing former Chelsea and Manchester City goalkeeper Willy Caballero. The veteran shot stopper was training with the club for the past month with a view to signing permanently. However, he will have to continue his search for a new team elsewhere, per London News Online.
PREMIER LEAGUE・11 DAYS AGO
ESPN

Manchester City were made to work for it but overcame Burnley 2-0 at the Etihad Stadium on Saturday. Bernardo Silva struck after 12 minutes to set City on their way to a win over a Burnley side that remain without a Premier League victory this season. Kevin De Bruyne added another in the second half to make the game safe.
PREMIER LEAGUE・10 DAYS AGO
newschain

Darren Moore rued Sheffield Wednesday’s lack of concentration after they threw away a two-goal lead to draw 2-2 at AFC Wimbledon. Lee Gregory’s double had seemingly put the Owls on course for an easy three points but Nesta Guinness-Walker halved the deficit midway through the second half. Wednesday had chances...
SOCCER・10 DAYS AGO
SkySports

A spirited fightback from AFC Wimbledon ensured the points were shared as Sheffield Wednesday squandered a two-goal lead in a 2-2 draw at Plough Lane. Despite the home side edging the early stages, it was the visitors who took the lead when Lee Gregory latched on to Barry Bannan's ball before curling a left-footed shot past Nik Tzanev from just outside the area.
SOCCER・10 DAYS AGO

Lacazette equalizes late for Arsenal in draw with Palace

LONDON (AP) — Arsenal substitute Alexandre Lacazette has scored a dramatic late equalizer against Crystal Palace to finish 2-2 in the English Premier League. The return of Patrick Vieira to Arsenal as Palace manager nearly haunted the home crowd at Emirates Stadium with the visitors leading deep into injury time on Monday night. But Lacazette managed to turn home a rebound in the fifth minute of added time before celebrating with Arsenal fans. Vieira’s return to the club where he brought glory to Arsenal as club captain ended in misery, with the Frenchman crouching down and pounding the turf.
PREMIER LEAGUE・8 DAYS AGO
chatsports.com

We came away with a point after late, late drama during our 2-2 draw with Crystal Palace on Monday night. Pierre-Emerick Aubameyang opened the scoring and ensured we were leading at the break, but the visitors fought back after the restart with goals from Christian Benteke and Odsonne Edouard. Alexandre...
PREMIER LEAGUE・7 DAYS AGO
IBTimes

Leicester City appears to be serious about making a strong case to becoming title contenders this season. After playing their first eight English Premier League matches, the Foxes have decided to continue bolstering the squad with youngsters who could possibly help the team in the future. The latest player to...
LEICESTER, NY・6 DAYS AGO
The Independent

Rio Ferdinand insists Ole Gunnar Solskjaer’s Manchester United lack an identity after their “embarrassing” 5-0 defeat to Liverpool.The Red Devils were humbled at Old Trafford on Sunday with the Norwegian now clinging onto his job after almost three years in charge.And speaking on his Five podcast, Ferdinand has opened up on what Solskjaer’s United are missing. “I’ve been there, we got beat 6-1 at home by Man City. But we had an identity to fall back on in a couple of weeks,” Ferdinand said. “This is the problem for this team, they’re struggling to find an identity and who they...
PREMIER LEAGUE・13 HOURS AGO
newschain

Wigan keep up away form with win at AFC Wimbledon

James McClean powered Wigan to their fifth straight away win in Sky Bet League One as they defeated AFC Wimbledon 2-0 at Plough Lane. Neither side got going in a slow first half but the visitors dominated the second and took a two-goal lead courtesy of a Paul Kalambayi deflection and McClean’s third in as many games.
SOCCER・3 DAYS AGO
newschain

Preston boss Frankie McAvoy urged his team to be aggressive and got exactly the response he was looking for as the Lilywhites came from behind to beat Coventry 2-1 and end their winless run. Not since late August had North End won a Championship game and that streak appeared to...
SOCCER・6 DAYS AGO
AFP

Lionel Messi was kept quiet as 10-man Paris Saint-Germain settled for a 0-0 draw with bitter rivals Marseille in a heated atmosphere in Ligue 1 on Sunday. The meeting of French football's biggest rivals was briefly held up on more than one occasion as objects were thrown from the stands when PSG players went to take corner kicks. There was another interruption in the second half when one young man invaded the pitch and approached Messi before being escorted off by a legion of security staff. It was that sort of night for PSG, who could not get into their stride and were reduced to 10 men when Achraf Hakimi was sent off in the second half following a VAR review for a last-man challenge on Cengiz Under just outside the box.
SOCCER・1 DAY AGO
The Independent

Chelsea boss Thomas Tuchel hopes Callum Hudson-Odoi can benefit from some tough love as the 20-year-old forward looks to deliver in front of goal again in the Carabao Cup.With Romelu Lukaku and Timo Werner on the sidelines, Hudson-Odoi was handed a chance to impress against Norwich on Saturday and scored in the first half of the 7-0 victory.It was Hudson-Odoi’s opening goal of the campaign and followed on from coming off the bench to replace Lukaku in the Champions League against Malmo.Tuchel feels Hudson-Odoi can benefit from an extra push to make the most of his opportunities, the next being...
PREMIER LEAGUE・1 DAY AGO