By Tanay Hudson
MadameNoire
24 days ago 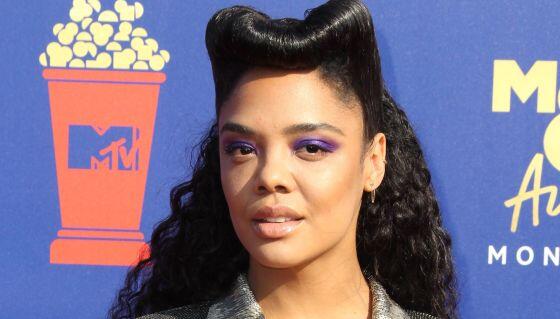 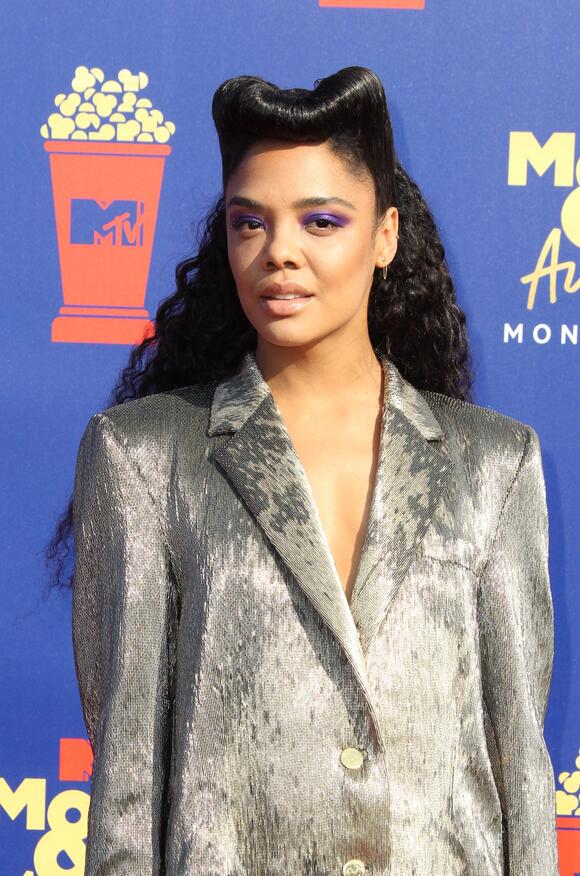 Director Rebecca Hall has brought a book from the 1920s to life to tell a story that still resonates almost a century after it was written. On November 10, Netflix will premiere Hall’s movie Passing starring Tessa Thompson and Ruth Negga.  Based on a 1929 novel by Nella Larson, Passing, which was shot in black and white , follows two childhood friends, Irene Redfield (Thompson) and Clare Kendry (Negga), who reunite in 1920s Harlem during the Harlem Renaissance. They both grew up as mixed race girls in Chicago, but what once connected them has led them down very different paths.

While Redfield lives her life as a Black woman with her Black husband and sons, Kendry passes for white and her white, racist husband has no clue about her mixed heritage . After Redfield and Kendry cross paths, Kendry becomes enmeshed in Redfield’s world trying to impress her friends and husband. Kendry turns Redfield’s life upside down as she becomes obsessed with her reality and weary of her world that’s based on a lie. While Kendry passes for white in order to get the life she dreamed of, she admires that Redfield didn’t have to lie in order to live a good life, which Kendry deemed as “perfect.”

Passing will be released in select theaters on October 27, before its Netflix debut on November 10. Watch the trailer below.

Idris Elba had his loved ones by his side as he attended the premiere of The Harder They Fall during the London Film Festival on Wednesday. For the special event, the English actor brought along his wife, Sabrina Dhowre Elba, and his 19-year-old daughter, Isan Elba, whom he shares with ex-wife Hanne Norgaard. The trio flashed smiles for the cameras as they walked the red carpet together holding hands. At one point, Isan shared a cute moment with Idris's costar Regina King as they snapped a photo together. This isn't the first time the group have graced us with a sweet family outing. They previously attended the 2019 Golden Globes, where Isan served as the Golden Globes Ambassador. See more pictures from their latest appearance ahead and be sure to check out Idris in The Harder They Fall when it hits Netflix on Nov. 3.
MOVIES・9 DAYS AGO
The Hollywood Reporter

After a pandemic-impacted year where the BFI London Film Festival was, like so many others, forced to scale back much of its offerings with very limited in-person events and almost zero international guests, Wednesday night saw the U.K.’s biggest cinema event roar back to life. The Royal Festival Hall, on the banks of the River Thames and a new setting after the festival shifted from its traditional base in Leicester Square, was the location for the grand 2021 revival and where Regina King, Idris Elba, Jonathan Majors, Regé-Jean Page, Ted Sarandos, Jay-Z and, according to reports (she ducked the photographers), Beyoncé,...
MOVIES・10 DAYS AGO
Variety

Jay-Z and Beyoncé Turn Heads at ‘The Harder They Fall’ LA Premiere with Jonathan Majors, Regina King and Jeymes Samuel

Variety cover star Jeymes Samuel could not have been more ready for his big moment. The writer, director, producer and composer was suited and booted as he stepped onto the bright blue carpet for the Los Angeles launch of his wild Western “The Harder They Fall” on Wednesday night at the Shrine Auditorium. Since the movie presents a fresh take on the dusty genre, the dress code was super fly. Samuel, stars Jonathan Majors, Regina King and Deon Cole, and the film’s producer Shawn ‘Jay-Z’ Carter went for an “all Black everything” moment, all showing up swagged-out in head to toe...
MOVIES・2 DAYS AGO
Us Weekly

Regina King! Tiffany Haddish! See What the Stars Wore to ‘The Harder They Fall’ Premiere

Red carpet ready! Stars slipped on their sequin mini dresses, draped themselves in jewels and headed over the Los Angeles premiere of The Harder They Fall on Wednesday, October 13. And even though the movie, which will be released on Netflix, has a western theme, cowboy boots and chaps were...
MOVIES・2 DAYS AGO

Filmmaker and author Melvin Van Peebles has died at the age of 89. The rebel director known for his groundbreaking "blaxploitation" films, passed on Sept. 21 surrounded by his family, the Criterion Collection announced. "Dad knew that Black images matter," his son Mario Van Peebles said in a statement released...
MOVIES・24 DAYS AGO
The Hollywood Reporter

Dorothy Steel, an actress in Black Panther, has died. She was 95. Steel’s agent Cindy Butler shared the news via an announcement on Facebook, writing that Steel died Friday morning at her home in Detroit. “Thank you Ms. Dorothy for giving me the opportunity to ride this wave with you,” wrote Butler. “Thank you for all the Casting Directors who hired Ms. Dorothy. Thank you to the world for loving on her from afar. I received calls from all over the world wanting to interview or do a Bio pic of her life. She was very selective.” Steel was born in 1926 and did...
CELEBRITIES・1 DAY AGO
iHeartRadio

EXCLUSIVE: Emmy winner Steve Buscemi (Trees Lounge, Boardwalk Empire) has wrapped production on his latest directorial effort, The Listener, starring Emmy nominee Tessa Thompson (Passing, Westworld), Deadline has learned. The contained film written by Oscar nominee Alessandro Camon (The Messenger) features only one on-screen role. It tells the story of Beth (Thompson), a helpline volunteer who is part of the small army that gets on the phone every night across America, fielding calls from all kinds of people feeling lonely, broken, hopeless, and worried. Over the last year, the tide has become a tsunami, and as Beth goes through her shift, the stakes rise: is this...
MOVIES・4 DAYS AGO
Variety

Oscar Isaac is one of the hottest actors working in Hollywood, showcased by his distinct and invigorating performances in films such as “The Card Counter” from Paul Schrader, “Dune” from Denis Villeneuve and “Scenes from a Marriage,” the limited series that just completed its run on HBO. Knowing firsthand about the hustle of making it in Hollywood, both as a Latino and wanting to “be seen” by his peers, he’s mindful of choosing projects and keeping his family first and foremost. On this edition of the Variety’s Awards Circuit Podcast, Isaac sits down to discuss various topics, including his chemistry with...
MOVIES・2 DAYS AGO
rolling out

The Carters took a trip across the Atlantic this week to the United Kingdom to support the upcoming film The Harder They Fall at the BFI London Film Festival. Jay-Z is one of the executive producers along with James Lassiter of the Black western which will stream on Netflix and will star Idris Elba, Zazie Beetz, Jonathan Majors, Regina King, LaKeith Stanfield and Delroy Lindo. Hov spoke to PA Media on Wednesday, Oct. 6, 2021, about the importance of having such a strong Black ensemble tell stories that depict the Western time frame.
MOVIES・9 DAYS AGO
iHeartRadio

Tessa Thompson is currently in New York working on the new season of ''Westworld'' and she is also promoting her new movie ''Passing.'' Her stylists Wayman + Micah posted her new promo look on instagram today(October 7th). She posed for the gram in a CHANEL RESORT 2022 white textured, knot...
CELEBRITIES・10 DAYS AGO
wmagazine.com

Tessa Thompson and Ruth Negga made a perfect pair at the premiere of their upcoming movie, Passing, at the New York Film Festival. The costars matched in black trench coats as they took the stage after a screening of the movie on Sunday night. Both were refined takes on a current moment for the leather (or in some cases, faux-leather) trench. We’ve seen Kim Kardashian West in one while wearing a gimp mask, and Cardi B recently wore a spiked version over in Paris.
DESIGNERS & COLLECTIONS・12 DAYS AGO
womenandhollywood.com

Tessa Thompson to Play a Helpline Volunteer in “The Listener”

Slated to hit theaters later this month, Rebecca Hall’s “Passing” sees Tessa Thompson sharing the screen with Ruth Negga in a period drama about old friends who reunite as adults. She’s set to take a solo outing in “The Listener,” a contained film that “features only one on-screen role.” Deadline confirmed that production just wrapped on the feature.
MOVIES・5 DAYS AGO
asapland.com

The casting for Selina Kyle / Catwoman in “The Batman” is getting closer and closer. As she has been saying for days now. So we have the list of the five actresses who sound like main candidates to take the role. The list of candidates includes Lupita Nyong’o ( “Black...
MOVIES・12 DAYS AGO
Deadline

EXCLUSIVE: Three Women and Hunters writer Tori Sampson will co-create HBO Max’s Tessa Thompson-produced adaptation of The Secret Lives of Church Ladies. Sampson will work with Deesha Philyaw, the author behind the book, and the pair will write and exec produce the drama series project, which is in development. It comes after Deadline revealed that that the Westworld star had set up her own production company Viva Maude, with a first-look deal at HBO and HBO Max and had set The Secret Lives of Church Ladies adaptation as one of the first projects that she has in the works with the streamer. The...
TV & VIDEOS・11 DAYS AGO
The Hollywood Reporter

Netflix released the first trailer for Halle Berry’s upcoming directorial debut Bruised on Thursday. Written by Michelle Rosenfarb and produced by, among others, Basil Iwanyk (John Wick, Sicario), the story follows Berry’s Jackie Justice, a mixed martial arts fighter who has a fall from grace and leaves the sport. Working as a cleaner and with a surprise — Manny (Danny Boyd Jr.), the son she gave up as an infant — on her doorstep, the down-on-her-luck Justice is still boiling with rage over her lost past life. But when she’s persuaded to participate in a brutal underground organized fight by her manager and...
MOVIES・2 DAYS AGO
fox7austin.com