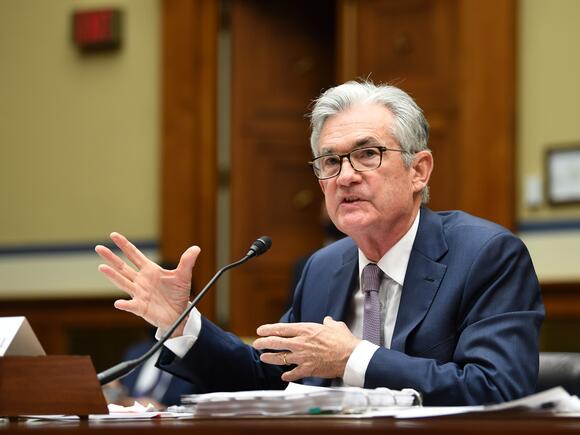 On Wednesday, the Federal Reserve inched closer to announcing its reversal of the pandemic-era support that's aided financial markets throughout the crisis, signaling the pullback could arrive before the end of the year.

The Federal Open Market Committee held interest rates near zero and maintained the size of its emergency asset purchases after meeting on Tuesday and Wednesday. The ruling extends the ultra-easy monetary policy set by the Fed in March 2020 to prop up the US economy.

The central bank has long indicated it will keep its support in place until "substantial further progress" toward stronger inflation and maximum employment were met. The recovery has since made progress toward both targets and officials could soon start the process of retracting the policy aid, the Fed said in a Wednesday statement .

"If progress continues broadly as expected, the Committee judges that a moderation in the pace of asset purchases may soon be warranted," the central bank said.

The Fed has been buying at least $80 billion in Treasurys and $40 billion in mortgage-backed securities each month to support financial markets and ease monetary conditions. The purchases are the first policies set to be normalized, with interest rate hikes set to follow.

That tapering process is no easy feat. Financial markets largely expect a tapering announcement after the FOMC's November meeting. Starting the process even later would suggest the economy isn't as healthy as expected. And shrinking the purchases before the anticipated date could shock investors and trigger panic selling.

Fed Chair Jerome Powell noted in a Wednesday press conference the tapering process could be swift if the recovery holds strong. FOMC members could start shrinking the purchases as soon as their November meeting, and the taper could be completed just months later, Powell said.

"Participants generally view that, so long as the recovery remains on track, a gradual tapering process that concludes around the middle of next year is likely to be appropriate," he said, adding the committee hasn't made a decision on the exact timing.

The criterion required for the Fed to consider rate hikes are much more stringent. The timing and pace of the upcoming taper won't hint at when rate lift-off will arrive, Powell said.

Economic projections updated by the Fed on Wednesday reveal the committee isn't united in its rate-hike timeline. Half of its 18 members expect the first rate hike to arrive next year, with three expecting rates to climb above 0.5%. The other nine see near-zero rates lasting through 2022.

The median projections practically ensure a rate hike will arrive by the end of 2023, with all but one member expecting higher rates that year.

WASHINGTON — The International Monetary Fund is warning of rising threats to the global economic recovery posed by the ongoing coronavirus pandemic and an outbreak of inflation. The lending agency called Thursday for greater efforts from wealthy nations to boost coronavirus vaccination rates in poorer countries, while also urging the...
BUSINESS・1 DAY AGO
Fox News

White House Chief of Staff Ron Klain, who was eviscerated by critics Thursday for endorsing a tweet that claimed inflation and supply chain issues affecting the country were "high class problems," once ripped the Trump administration for being out of touch on price increases. Klain, a prolific tweeter, made news...
PRESIDENTIAL ELECTION・2 DAYS AGO
MarketWatch

The University of Michigan's gauge of consumer sentiment fell to a preliminary October reading of 71.4 from a final September reading of 72.8. Economists polled by the Wall Street Journal expected a reading of 73.
BUSINESS・2 DAYS AGO
AFP

Fed officials lean towards stimulus pullback as soon as November

Unless the US economic situation changes dramatically, Federal Reserve officials are leaning towards cutting back on monetary stimulus as soon as November, according to a central bank document released Wednesday. The date when the Fed will pull back on its monthly bond purchases has been a closely watched topic for months, and the policy-setting Federal Open Market Committee (FOMC) last month indicated the time could come "soon." The minutes of the FOMC meeting released Wednesday showed officials speaking positively of plans to begin cutting back on the bond purchases as soon as after their next meeting scheduled for November and end it by mid-2022. Officials indicated that "provided that the economic recovery remained broadly on track, a gradual tapering process that concluded around the middle of next year would likely be appropriate," according to the minutes.
BUSINESS・4 DAYS AGO

Federal Reserve officials last month firmed up their plans to begin reducing their bond-buying stimulus program in November and to possibly end the asset purchases entirely by the middle of next year amid risks of more persistent inflation. Minutes of their Sept. 21-22 Fed meeting, released Wednesday, revealed a stronger...
BUSINESS・4 DAYS AGO
IBTimes

The U.S. Federal Reserve has signaled that it remains on track to begin tapering off its asset purchase program in November despite a recent poor job report for September. Speaking to the International Institute of Finance on Tuesday, the Fed’s Vice Chair Richard Clarida said that believes that "the ‘substantial further progress’ standard has more than been met", clearing the way for the beginning of a Fed taper. He suggested that the paring back of the asset purchase program that started in March 2020 to combat the COVID-19 pandemic may conclude in the middle of 2022.
BUSINESS・5 DAYS AGO
Axios

Fed governor Lael Brainard is filling in more blanks about how the central bank could weigh and limit financial institutions' exposure to climate risk. Driving the news: "I anticipate it will be helpful to provide supervisory guidance for large banking institutions in their efforts to appropriately measure, monitor, and manage material climate-related risks," she said in a speech Thursday.
ECONOMY・9 DAYS AGO
Markets Insider

Fed's Clarida made a multi-million dollar portfolio change the day before Jerome Powell hinted at policy action against COVID-19. He traded between $1 million - $5 million out of a bond fund into stock funds, financial disclosures show. The Fed's guide to conduct states that "the system should never be...
MARKETS・13 DAYS AGO

Fed officials should not be trading securities

The Federal Reserve is scrambling to deal with an urgent question: Should its officials be allowed to trade in the securities of companies and other issuers that their decisions might affect? The answer ought to be obvious. No, they shouldn’t. The central bank’s conflict-of-interest rules have come under scrutiny because...
U.S. POLITICS・13 DAYS AGO
Reuters

(Reuters) -The White House has been speaking with U.S. oil and gas producers in recent days about helping to bring down rising fuel costs, according to two sources familiar with the matter. Energy costs are rising worldwide, in some cases leading to shortages in major economies like China and India....
POTUS・4 DAYS AGO
CNN

New York (CNN Business) — The United States could be just weeks away from defaulting on its debt for the first time ever. The $28.4 trillion debt limit was reinstated August 1. Since then, Treasury Secretary Janet Yellen has been keeping the nation's finances afloat by using emergency accounting maneuvers. Known as "extraordinary measures," these steps allow the government to borrow additional funds without breaching the debt ceiling.
ECONOMY・16 DAYS AGO
itechpost.com

Government officials might feel reluctant about a fourth stimulus check. However, a recent study revealed that Americans desperately need the fourth payment wave in this time of pandemic. Due to COVID-19, Americans confront economic price inflation, slower job gains and crippled supply chains. Many are suffering from these changes, especially...
BUSINESS・1 DAY AGO

Global finance officials are worried about rising inflation pressures but there it is little fear that it will become a "runaway train," IMF chief Kristalina Georgieva said Sunday. However, in advanced economies "policymakers have the tools" to deal with inflation, she said, so "there is no significant concern that this would be a runaway train."
BUSINESS・13 HOURS AGO
Forbes

The U.S. Economy May Be Facing Another Recession, New Research Suggests

The U.S. economy may be heading for another downturn within the next six months if sagging consumer expectations are any guide, according to new research from ex-Bank of England member David Blanchflower. It’s a counterintuitive prediction given all the talk of recovery and inflation fears permeating the economic debate at...
BUSINESS・3 DAYS AGO
MarketRealist

What Happens to Social Security Payments if the U.S. Defaults on Its Debt

On Oct. 7, 2021, the U.S. Senate approved legislation to temporarily increase the debt ceiling to avoid a first-ever default. The Senate-passed bill now moves to the House of Representatives for approval before Joe Biden can sign it into law. Article continues below advertisement. Lawmakers have less than two weeks...
CONGRESS & COURTS・9 DAYS AGO
republicmonews.com

$1,400 Monthly Stimulus Payments Could Be Given To Selected Americans; IRS To Release Another Payments To Qualified Families

On October 15, 2021, new stimulus funds will be distributed. It is the most current installment of the federal Child Tax Credit expansion. That payout, as well as a large sum of money, was made available to citizens as part of the American Rescue Plan, which was signed into law by President Joe Biden in March, Fox45 Baltimore news reported.
U.S. POLITICS・18 HOURS AGO
leedaily.com

Since the United States is facing a continuous rise in inflation, less job surplus, and a weakened supply chain, new research shows that the citizen’s maximum requirement of a stimulus check at the starting of the covid-19 pandemic perpetuates to struggle utmost. Previous Three Stimulus Checks Critical for Lower Income...
INCOME TAX・22 HOURS AGO
Jano le Roux

Experts Say: The most obese state in America is also the most religious

Many individuals around the world, including those in the United States, identify as religious. Although there are many different religions, the majority of them are based on the belief in a higher power. Some parts of the world are extremely religious, while others are not. Some states in the United States are more religious than others.
13 HOURS AGO
BoardingArea

The USA sets 8th November as the magic date

A lot of people – including your writer and editor – have been waiting for the chance to return to the United States of America. Well, it seems the 8th November is the magic date, when the US will end its blanket travel bans, and base entry on vaccination status.
WORLD・1 DAY AGO
Fox News

A new book from an investigative Australian reporter dives into how Dr. Anthony Fauci reportedly misled the Trump administration on gain-of-function research in China. "Fauci’s public persona as a cautious, careful medical professional is contradicted by his central role in kickstarting exceptionally fraught gain-of-function research in the United States after the ban introduced in the Obama era, along with his role in funding coronavirus research in China in unsafe laboratories. Laboratories that intelligence agencies suspect may have sparked the pandemic," Sharri Markson details in her new book, "What Really Happened In Wuhan."
POTUS・15 HOURS AGO