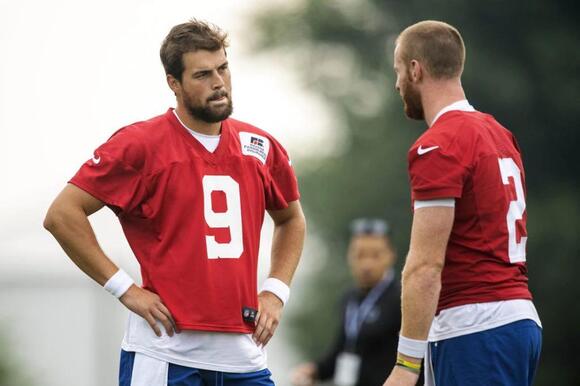 Carson Wentz confessed to not having one good foot to stand on Wednesday, but the Indianapolis Colts quarterback plans an all-out blitz to get ready for Sunday’s game at Nashville against the Titans.

Wentz said he sprained his left ankle and, more severely, his right ankle last week in the home loss to the Los Angeles Rams . He was forced from the game in the fourth quarter and instantly worried his right foot and ankle might be a long-term issue. The right ankle injury is officially a high-ankle sprain.

Jacob Eason, who replaced Wentz against the Rams, would start at Tennessee (1-1) and took all the first-team reps for the Colts (0-2) in Wednesday’s practice. Wentz did not participate.

Wentz said he spent the past 48 hours focused on getting his ankles ready to play and will focus on that goal the rest of the week.

“A lot of treatment. Throwing kitchen sink at it trying to get healthy,” Wentz said.

Eason was intercepted by Rams cornerback Jalen Ramsey, effectively ending the Colts’ chances. The Rams fumbled away an 11-point lead before their comeback. 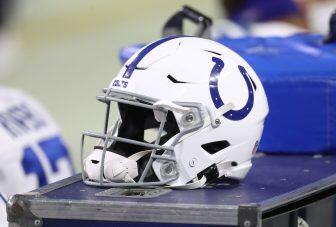 Wentz left his home debut with the Colts, who acquired the former No. 2 overall draft pick from the Philadelphia Eagles in the offseason, and has battled injuries throughout his career. He had foot surgery in August and missed the entire preseason.

Head coach Frank Reich said the team will prepare to start Eason while leaving open the possibility Wentz can play.

Wentz said Wednesday he is feeling betting by the hour.

Tony Dungy spent seven seasons as the head coach of the Indianapolis Colts and he won a Super Bowl with them thanks in large part to his relationship with quarterback Peyton Manning. So he knows a thing or two about what works to win with the Colts. On paper, he...
NFL・6 DAYS AGO
ClutchPoints

The Indianapolis Colts have won their last two contests and are showing signs of life after a 1-4 start to the season. A big reason behind that has been the consistent play from quarterback Carson Wentz. The Colts QB may not be lighting up the box score with eye-popping numbers,...
NFL・1 DAY AGO
Sports Illustrated

Check out odds, plays and more for the San Francisco 49ers vs. Indianapolis Colts NFL Week 7 matchup on October 24, 2021.
NFL・6 DAYS AGO
Sportsnaut

The visiting Detroit Lions battled but ultimately succumbed to a more complete team in the Los Angeles Rams, who won
NFL・1 DAY AGO

The Indianapolis Colts came to life last week against the Miami Dolphins. They continue to show a resurgence against the Baltimore Ravens on Monday Night Football. Carson Wentz looked for Michael Pittman Jr. in the third quarter with Indy up 10-3. The former USC wideout made a wonderful catch, kept...
NFL・14 DAYS AGO
cbs4indy.com

INDIANAPOLIS – In the aftermath of a crushing loss that for so long appeared to be a defining victory against a quality team in a hostile environment, Carson Wentz stood in front of his teammates in the locker room and stated the obvious. His Indianapolis Colts had just witnessed a...
NFL・14 DAYS AGO
kentsterling.com

Be honorable. That’s the only choice for Colts general manager Chris Ballard, and it’s the choice he will make. It can be argued that Ballard’s roster is imperfect, building from the inside out has left the Colts wanting on the exterior of both his offense and defense, and that his care in the quality of men he invite to be Colts has left the team with less dynamism. But Ballard is beyond reproach as an honorable and honest man.
NFL・12 DAYS AGO

Fantasy football Week 8 has arrived, so who should I start? Who should I sit? We have some answers right
NFL・23 HOURS AGO
chatsports.com

INDIANAPOLIS – The Indianapolis Colts were 18 minutes away Monday from the type of signature victory they needed to turn around what has been a tough season. Eighteen minutes. On national television. Against a playoff-caliber opponent. But then, more than missed field goals happened. The defense made Baltimore Ravens quarterback...
NFL・13 DAYS AGO
chatsports.com

BALTIMORE -- The Baltimore Ravens weren't able to set an NFL rushing record but all they will remember is how Lamar Jackson carried them with his arm. Rallying from 19 points down in the second half, Jackson led the Ravens to an improbable 31-25 comeback win over the Indianapolis Colts. Jackson's 5-yard touchdown pass to Marquise Brown in overtime lifted Baltimore to its fourth straight win.
NFL・14 DAYS AGO
USA TODAY Sports Media Group

Wentz Watch: How many snaps did Colts QB play in Week 5 loss to Ravens

Week 5 of the NFL season offered another opportunity to track former Eagles quarterback Carson Wentz and the Miami Dolphins as Philadelphia looks to snag three high first-round picks this spring. When the Eagles traded Wentz in the offseason, the team received a conditional second-round rounder in 2022 that would...
NFL・14 DAYS AGO

Thanks to the nflFastR project and NFL NextGen Stats for the timely sources of data. For those of you new to this, I will publish key QB stats each week judging how well the Colts passing game performed. Yes, O-Line, receivers and play-calling impact these numbers but they are primarily QB measures. I will probably modify the charts throughout the season. ﻿Commentary will be brief but feel free to let me know in the comments that stats aren’t everything. (click charts for larger view)
NFL・14 DAYS AGO
Sports Illustrated

Discover player props odds, plays, and insights for Carson Wentz in his Week 6 contest with the Indianapolis Colts against the Houston Texans.
NFL・11 DAYS AGO
chatsports.com

How many games does Carson Wentz need to miss for the Colts to keep first-round pick?

How much time does quarterback Carson Wentz need to miss for the Colts' trade compensation to the Philadelphia Eagles to be a second-round pick instead of a first?. Indianapolis dealt its 2021 third-round pick -- the Eagles traded that pick (Chauncey Golston) and the 12th pick in the draft (Micah Parsons) to the Dallas Cowboys for the 10th pick (DeVonta Smith) -- and a conditional 2022 pick:
NFL・13 DAYS AGO
crossingbroad.com

Carson Wentz threw for 400 yards and two touchdowns last night, and the Colts still lost. Hard to pin it on the former Eagles quarterback. Yeah, he did lose a fumble in the first half, but put his team up 22-3 before Lamar Jackson went into beast mode. Indy had a field goal blocked and then missed a second field goal, which would have won them the game.
NFL・14 DAYS AGO

BISMARCK, N.D. (KFYR) - Monday night, Carson Wentz threw for more than 400 yards for the first time in his N.F.L. career, but you’ll have to excuse him if he’s not rejoicing over it because the Colts lost to the Ravens in overtime. Carson completed 71 percent of his 35-passes...
NFL・13 DAYS AGO
INFORUM

BALTIMORE, Md. — Baltimore's Lamar Jackson led the Ravens to 16 fourth-quarter points and then a touchdown in overtime for a 31-25 victory over former NDSU quarterback Carson Wentz' Indianapolis Colts. The Colts, who led 25-9 entering the fourth quarter, still could have won the game, the Ravens' rally aside....
NFL・14 DAYS AGO