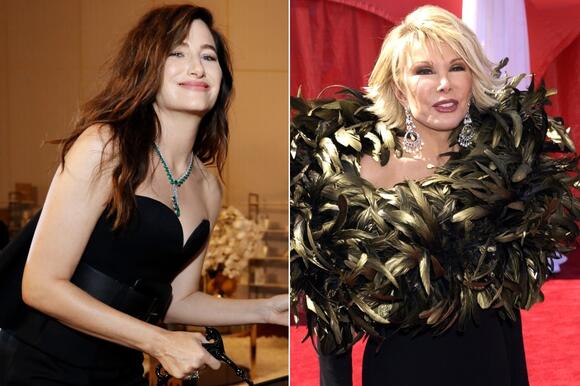 Actually, it's been Joan all along .

Kathryn Hahn has been cast as Joan Rivers in an upcoming series about the legendary comedian titled "The Comeback Girl."

The Emmy-nominated "WandaVision" star will also co-executive produce the limited series about the brash late-night fixture, which is in development for Showtime, according to a Wednesday statement from the premium cable channel.

The series is set after the cancellation of "The Late Show Starring Joan Rivers," Fox's late-1980s talker that made the stand-up comedian the first woman to host her own late-night talk show.

But the infamous series also made Rivers a bitter rival of longtime friend Johnny Carson, on whose 1960s "Tonight Show" she was a frequent guest, host and apparent successor. But she eventually became persona non grata after pitching her series to Fox without telling him.

Her "Late Show" was canceled after about 150 episodes and around the time her husband, Edgar Rosenberg, who was also the show's producer, died by suicide in 1987.

"Trailblazer. Adored. Cruel. Diva," the new series' logline reads. "Joan Rivers had a life like no other. At age 54, she was a superstar comedienne … and then it all fell apart. 'The Comeback Girl' is the awe-inspiring untold story of how Joan Rivers persevered through near suicide and professional abyss to rebuild herself and her career to become a global icon."

The star of E!'s "Fashion Police" died in 2014 at 81, days after undergoing a routine endoscopy at a New York City clinic. Her family settled a medical malpractice lawsuit against the facility in 2016.

Warner Bros. Television is producing "The Comeback Girl" with Atlas Entertainment and Berlanti Productions. "Riverdale" producer Greg Berlanti is set to direct the series, and "The Blacklist" writer Cosmo Carlson will write it. Both will also co-executive produce.

Before Hahn embodies Rivers, the "WandaVision" supervillain will next be seen in the Apple TV+ series "The Shrink Next Door" with Will Ferrell and Paul Rudd, as well as director Rian Johnson's "Knives Out" sequel.

Will Ferrell, Kathryn Hahn, Paul Rudd star in 'The Shrink Next Door' trailer

Paul Rudd incidentally became a therapeutic presence when the "Hey, look at us" clip from his Hot Ones interview went viral almost exactly two years ago. "The Shrink Next Door" makes it official. Apple TV Plus has shared its trailer for its forthcoming limited series, starring Rudd as Dr. Isaac...
MOVIES・14 DAYS AGO
toofab.com

She also showed off her best Joan impression. Melissa Rivers would be open to honoring Joan Rivers' memory by playing her late mother's character in any possible "Spaceballs" reboot. Appearing on the most recent episode of "Podsauce," hosts Dax Holt and Alesha Reneé brought up how popular reboots and sequels...
MOVIES・12 DAYS AGO
TVLine

A onetime Gotham citizen is returning to Fox, by way of The Resident‘s fifth season: Actress Kaley Ronayne has been tapped for a recurring role on the medical drama, TVLine has exclusively learned. Ronayne will appear as Cade, a badass emergency room doctor described as an “action heroine.” Strong and athletic, Cade takes no prisoners, but also has her own brand of no-nonsense empathy for her patients. She’s a rational problem-solver and, physically, a daredevil. As Resident co-showrunner Peter Elkoff tells TVLine, Cade will have a large presence in the second half of Season 5, where she’ll “help us do one of those thriller-y...
TV SERIES・7 DAYS AGO
justjaredjr.com

Joan Rivers’ estate is getting the last laugh. In this week’s “Well boy, we sure got worked up over nothing,” Variety is now reporting that the planned Joan Rivers Showtime series “The Comeback Girl,” the origin of the “Jewface” controversy that launched a thousand think pieces, will not move forward. Looks like the producers didn’t secure the life rights. Whoops.
CELEBRITIES・20 HOURS AGO
EW.com

As it turns out, Showtime's recently announced miniseries The Comeback Girl never even had a chance to make its debut. EW confirmed the show about Joan Rivers, which had Kathryn Hahn attached to play the legendary comedian, will not move forward since the project hasn't been authorized by Rivers' estate. Variety was the first to report the news.
TV SERIES・18 HOURS AGO
Rolling Stone

Production has been halted on the Showtime limited series The Comeback Girl after it was revealed that the show’s producers failed to secure Joan Rivers’ life rights, currently held by her daughter Melissa Rivers. (via Variety) The Comeback Girl was set to be produced by Warner Bros. Television, Atlas Entertainment, and Berlanti Productions with Kathryn Hahn as executive producer in addition to portraying Rivers in the leading role. Cosmo Carlson had been brought on to helm the script for the series with Greg Berlanti as director as well as executive producer. The show intended to home in on the events following the cancellation of The Late Show, the late comedian and actor’s late-night talk show which ran on Fox from 1986 through 1987. The short-lived run on the network ended with both Rivers and her husband Edgar Rosenberg –– Melissa’s father –– being fired from their respective positions, her as host and him as producer. Rosenberg committed suicide that following August. Without access to Rivers’ life rights, the show could go on, but it would be barred from incorporating the more specific identifiers of her person, including the catchphrases and well-known quotes that have come to define her.
TV SERIES・20 HOURS AGO
The Jewish Press

Showtime Suspends TV Series Based on the Life of Joan Rivers

The production of “The Comeback Girl,” a limited TV series based on the life of comedienne Joan Rivers (1933 –2014) was suspended on Tuesday, according to Variety. The project, starring Kathryn Hahn (WandaVision), had been in development at Showtime. The summary for “The Comeback Girl” reads: “Trailblazer. Adored. Cruel. Diva....
TV SERIES・2 HOURS AGO

In just about everything Kathryn Hahn has been a part of in her career, she's been a standout highlight, so let's all agree right up top that any project she joins automatically becomes an exciting one. Following her Emmy-nominated performance in Marvel's WandaVision, and her impending role opposite fellow MCU star Paul Rudd in Apple TV+'s The Shrink Next Door, Hahn was tapped to portray legendary comedian Joan Rivers for a biographical Showtime drama. But it looks like that project isn't happening anymore, so does this mean the actress could return to the role of Agatha Harkness sooner rather than later?
TV SERIES・18 HOURS AGO
WGNO

Peter Scolari, who starred alongside Tom Hanks in the 1980s sitcom "Bosom Buddies," has died at the age of 66, TMZ reported on Friday.
CELEBRITIES・2 DAYS AGO
Los Angeles Times

Kathryn Hahn will no longer be playing Joan Rivers in 'The Comeback Girl'. The 48-year-old actress was originally cast as the legendary stand-up comic - who died in 2014, aged 81 - in the limited series, but the production has now been scrapped amid intellectual property issues. Kathryn was actually...
MOVIES・10 HOURS AGO

During the late 1990s and early 2000s, Seann William Scott made a huge name for himself as one of the stars of the American Pie film franchise. His character, Steve Stifler, is arguably one of the most memorable of the era and he has carved out a special place in pop culture history. Throughout the mid-2000s, Seann continued to appear in some pretty popular comedies, but by the time the 2010s rolled around he had started to fade from the spotlight. In the years since he played Stifler, lots of people have wondered what Seann is up to. The good news is that he’s still around and you’ll probably be seeing him much sooner than you think. Keep reading to find out what happened to Seann William Scott.
CELEBRITIES・4 DAYS AGO
Variety

James Michael Tyler, an actor beloved for his portrayal of Gunther on “Friends,” died of prostate cancer on Sunday morning, his manager confirmed to Variety. He was 59. Tyler died peacefully in his Los Angeles home. The actor was diagnosed with advanced prostate cancer in September 2018. Tyler shared his story earlier this year on “Today.” He also worked as a campaigner for individuals with prostates to get a first blood test as early as 40 years old. “Michael’s loved ones knew him as an actor, musician, cancer-awareness advocate and loving husband,” his manager said in a statement. “Michael loved live music,...
CELEBRITIES・2 DAYS AGO
arcamax.com

Melissa Rivers: My mother, Joan Rivers, told me Thanksgiving was about pilgrims being 'bad guests'

Melissa Rivers says her mother, Joan Rivers, once told her Thanksgiving was just about the pilgrims being "bad guests". The 53-year-old actress has opened up on some of the white lies her late mother and comedy icon Joan - who passed away in 2014 - used to tell her as a child in her upcoming book, 'Lies My Mother Told Me: Tall Tales from a Short Woman'.
CELEBRITIES・12 DAYS AGO
Variety

Welcome to this week’s “Just for Variety.” Wonder Woman approves of Robert Pattinson as the new Batman and Zoë Kravitz as Catwoman! “Rob looks amazing,” Gal Gadot told me last night at Elle’s Women in Hollywood event at the Academy Museum when I asked if she had seen the new “The Batman” trailer. “I love his voice and I love the whole tone of everything. “And I love Zoë. She looks incredible. She’s a sweetheart. She’s a talented woman,” she continued. “And I’m so happy to have another female as a comrade.” So when does Gadot think we’ll see an all-female superhero movie with...
MOVIES・6 DAYS AGO

EXCLUSIVE: Leven Rambin (The Forever Purge), Jake McLaughlin (Quantico), Shane West (Gotham), Sohvi Rodriguez (Animal Kingdom) and Dee Wallace (E.T. the Extra-Terrestrial) will star in Homestead, a thriller from writer-director Marcos Efron (And Soon the Darkess), which is currently in production in Knoxville, Tennessee. The film from Conley Entertainment Group centers on a young couple (Rambin and McLaughlin) who have fled the city in search of peace and serenity in the mountains, but subsequently find that they must contend with myriad dangers—both close to home, as well as on a much larger scale. Brian Conley, Mark Heidelberger, Eric Bross and Stephen Israel...
KNOXVILLE, TN・1 DAY AGO
Variety

Julia Louis-Dreyfus and Nicole Holofcener will reunite on “Beth and Don,” a new comedy about a novelist whose marriage starts to deteriorate after she overhears her husband offering up a frank assessment of her work. The pair previously teamed to much acclaim on 2013’s “Enough Said.” Louis-Dreyfus will produce, as well as star in the picture, with Holofcener writing the script in addition to directing it. Likely Story’s Anthony Bregman and Stefanie Azpiazu, long-time collaborators of the writer and director, will produce the film. FilmNation Entertainment is launching international sales at the upcoming American Film Market. UTA Independent Film Group will...
MOVIES・23 HOURS AGO
Popculture

The Cosby Show star Keshia Knight-Pulliam is a married woman. Pulliam is most-known as Rudy Huxtable as the fictional daughter of "America's Favorite Dad" Bill Cosby on the highly successful NBC sitcom, which ran for eight seasons. Pulliam has had a rough few years. She famously married former Real Housewives of Atlanta star Ed Hartwell, a former NFL star who was married to Lisa Wu. Pulliam and Hartwell shocked fans by announcing their surprise New Year's Eve wedding in 2016. Months later, after announcing their pregnancy, Hartwell began denying the paternity of their unborn daughter, Ella Grace. A paternity test would prove otherwise but the battle ensued.
NFL・23 DAYS AGO
hotnewhiphop.com

The shooting on the set of Rust last week has been the non-stop talk of the industry as people attempt to piece together how such a brazen act of negligence could occur. We previously reported on Alec Baldwin firing a prop weapon on the set of his western film while on location in New Mexico. Halyna Hutchins, the director of photography, was fatally wounded. Director Joel Souza was shot but survived his injuries.
CELEBRITIES・1 DAY AGO