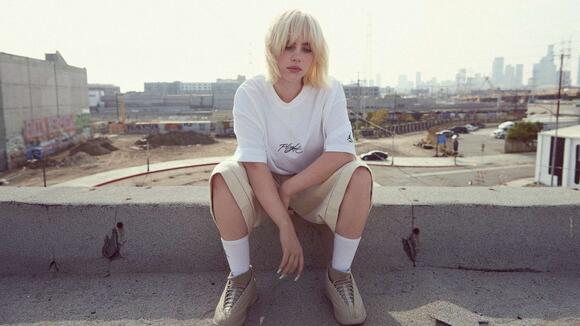 Billie Eilish is putting her stamp on one of Nike's upcoming Air Jordan shoes launches.

The singer has teamed up with Nike to design two exclusive pairs of Air Jordans that are 100% vegan and made from more than 20% recycled material.

One pair is a tan-colored Air Jordan 15, representing her new "Happier Than Ever" era, while the other is a lime-green Air Jordan 1 KO. The latter is an homage to her former signature hair color.

"I am SO excited to finally share my two air jordan silhouettes with you," Eilish captioned a duo of photos on social media of herself wearing the sneakers.

She continued: "I've always loved @jumpman23 and it was such an incredible and surreal experience getting to create these, especially in a sustainable fashion.

The "Lovely" singer opened up behind-the-scenes with Nike in a series of videos to share how her sustainable new shoes came to be.

“This color is such a classic, stupid, little 'old me' thing, I guess," she told Nike . "I really wanted to kind of have almost like an ode to myself … this was me, for a while."

"They're gender-neutral, which I really love," she added. "You can be whoever and whatever you want with these."

Both shoes launch on Sept. 27 on store.billieeilish.com and on Sept. 30 on the Nike SNKRS app.

She wore a glamourous vintage Hollywood-inspired dress by the designer and shared that moving forward, the label will be completely fur-free.

"I am beyond thrilled that @fernandogarciam1205 and @tokibunbun and the entire team heard me on this issue, and have now made a change that makes an impact for the greater good, not only for animals but also for our planet and environment too," Eilish said in a post about her work with Oscar de la Renta. "I'm honored to have been a catalyst and to have been heard on this matter. I urge all designers to do the same."

What Made the Air Jordan a Slam-Dunk Design

Michael Jordan's relationship with Nike started during his rookie season in 1984. But by 1987, the partnership was in trouble. For one thing, Jordan wanted more control over the designs of the shoes that bore his name. The young superstar was even thinking of parting ways with the company and following Air Jordan I and II designer Peter Moore to arch rival Adidas. Nike needed to do something big, so the company turned to Tinker Hatfield.
APPAREL・4 DAYS AGO
Footwear News

Nike has a new sneaker on the way that’s designed specifically for dancers. The sportswear giant revealed the Nike Air Sesh shoe this week and at the time of publication, only select Nike members are able to purchase a pair. The shoe was designed by the industry veteran Tinker Hatfield and was created in collaboration with Los Angeles-based dance crew and choreographers, the Kinjaz. The shoe features a mid-cut leather upper and incorporates a wider toe box to allow wearers more room for their toes while on the dance floor. Cushioning the underfoot is the Cushlon foam midsole in addition to the...
APPAREL・10 DAYS AGO
Footwear News

Issa Rae’s “Insecure” is coming to an end in its fifth season, and the HBO series kicked things off with its premiere on Oct. 21 in Los Angeles. Rae wowed in a caramel-colored dress with matching ostrich feather trim along the sleeves and hem. The dress was fresh off the runway from London fashion house Rokh’s spring 2022 collection. The form-fitting dress featured a daring crisscross design on the bust. Accessories were kept minimal as the actress opted for large rhinestone drop earrings. The director wore metallic ankle-strap sandals with a cutout detail on the heels. The gold heels were a modest 3 inches for comfort. Rae’s typical red carpet style is ultra-glamorous and includes a little sparkle. The entertainer’s choice for heels are usually Stuart Weitzman, Jimmy Choo or Schutz. Get glam and slip into a pair of gold metallic sandals for fall. Buy Now: Schutz Altina Metallic Lizard-Embossed Leather Sandals, $118 Buy Now: A New Day Women’s Gillie Heels, $28 Buy Now: Steve Madden Flamenco Ankle Strap Sandal, $100
LOS ANGELES, CA・1 DAY AGO
Footwear News

The women’s exclusive Air Jordan 1 Low “Bronze Eclipse” was one of the least talked about sneaker releases when it dropped this year but as time went on, the shoe started selling out. However, fans who are in search of the style can find a pair of the resale market and prices aren’t much higher than retail. For instance, the lowest asking price on StockX at the time of publication is at $133 for a women’s size 11.5 and as high as $177 for a women’s size 8.5. The same shoe is also available on both GOAT and Flight Club and the...
RETAIL・17 DAYS AGO

Kylie Jenner is prepping for Halloween with a brand new Kylie Cosmetics collection. Promoting the upcoming “A Nightmare on Elm Street” collaboration, the media personality continued to pay homage to the horror film series in another statement look. Yesterday’s outfit included a white high-neck bodysuit — resembling a design from her sister Kim Kardashian’s Skims line — and an unmissable pair of boots. The lipstick-colored pair featured a pointed toe and slick patent uppers, all atop an ultra-thin stiletto heel. From leather twists on the trend to edgy lace-up styles, you can find knee-high boots on everyone from Ciara to Lily Collins...
BEAUTY & FASHION・16 DAYS AGO
mymixfm.com

It’s considered a high honor to write a Bond song, but for Billie Eilish, it became a full-circle moment when she was tapped to compose the theme for the latest James Bond movie, No Time to Die. Appearing on Jimmy Kimmel Live! Wednesday, the “bad guy” singer revealed she had...
MUSIC・9 DAYS AGO
Footwear News

Kendall Jenner is getting in the Halloween spirit in a sneakerhead-approved way. The model served up a fall-themed photo dump on Instagram earlier this week, showing off her Jack-o-Lanterns, autumnal decorating and a pair of rare sneakers to tout. The recognizable Nike Dunk Lows pay homage to Freddy Kreuger of “A Nightmare on Elm Street” with blood-splattered overlays and striped uppers inspired by the character’s signature attire. With silver accents to portray Kreuger’s bladed hands, the sneaker also comes complete with insoles that echo the villain’s scarred figure. View this post on Instagram A post shared by Kendall (@kendalljenner) While Jenner modeled the...
DESIGNERS & COLLECTIONS・2 DAYS AGO
hotnewhiphop.com

One of the best Air Jordan 11 colorways of all time was the "72-10" model which was meant to commemorate the Chicago Bulls' historic season in the 90s. The shoe had a very basic look to it, although sneakerheads didn't seem to care as it was the perfect shoe for hardcore Michael Jordan fans. After all, MJ fans love shoes that are specific to his accomplishments, and these kicks were able to fit that bill. While the shoe hasn't been released in quite some time, it will be getting an interesting update next year.
BEAUTY & FASHION・13 DAYS AGO

Editor's Notes: When it comes to catching Ls on sneaker releases, few rappers or designers can boast a portfolio like Travis Scott. Under his Cactus Jack imprint, La Flame has delivered some of Nike's fasting selling, most desired, and most heartbreaking collaborative drops. 2021 was an especially tough year for...
APPAREL・6 DAYS AGO
Footwear News

Ciara continues to spotlight her own brand in style. The “Level Up” singer took to Instagram again yesterday to show off a chic head-to-toe look from her gender-neutral Human Nation line, which she founded with her husband, Seattle Seahawks quarterback Russell Wilson. The collection, sold at Kohl’s, consists of a range of tees, hoodies, joggers, leggings and more, plus sneakers. The snaps see the 35-year-old “Body Party” artist modeling an eye-catching highlighter yellow crewneck sweatshirt with a cropped hem and black drawstring sweatpants. On her feet, she wears a pair of the brand’s black high-top sneakers featuring hits of white throughout. The...
BEAUTY & FASHION・1 DAY AGO
Footwear News

Sophie Turner found the perfect way to style your oversize T-shirts for fall as she left her New York hotel with Joe Jonas this week. Stepping out on Thursday, the “Game of Thrones” actress opted for a casual grunge in an oversize black tee, turning the piece into a dress with a little help from legwear; the sheer tights act as coverage to balance out the shorter hem of her top, providing a versatile way to style pieces in your closet this season. When it came to footwear, the edgy appeal of Turner’s look continued with high-top sneakers from her most beloved...
BEAUTY & FASHION・1 DAY AGO
Billboard

Billie Eilish is getting ready to make her debut in the beauty industry. On Wednesday (Oct. 20), the "Happier Than Ever" singer sat down for an interview with Vogue, where she revealed she will be releasing her first-ever fragrance, titled Eilish, in November. “Perfumes have been one of my greatest...
CELEBRITIES・3 DAYS AGO

Travis Scott and Jordan Brand could soon deliver yet another coveted Air Jordan 1 collab. The Houston rapper shared a photo of him wearing an unreleased iteration of Michael Jordan’s signature basketball shoe on Instagram yesterday. The low-top shoe sports a gray-based upper that’s combined with white overlay panels while brown dresses the tongue and sock liner. This style also features a reverse Swoosh branding on the lateral side, which has been a signature design element for Scott’s Jordan 1 collabs. Completing the design is a white midsole and a brown outsole. Scott did not provide any release info for the shoe...
BEAUTY & FASHION・5 DAYS AGO
thewoodyshow.com

With the release of his debut solo album on the horizon, FINNEAS reveals he is content with his career. Optimist comes off the heels of Billie Eilish's sophomore record, Happier Than Ever, and arrives on October 15. Ahead of his solo debut, the producer, singer, and songwriter sat down with Irish Times to discuss his upcoming record, and reflect on how he and his sister rose to fame at such a young age.
MUSIC・14 DAYS AGO
hotnewhiphop.com

This past year, the Air Jordan 14 Low has received a plethora of new colorways, and fans have been enjoying them. The silhouette is an underrated one and with the current trends in mind, there is no doubt that the Air Jordan 14 Low fits in well with some of the more contemporary shoes on the market.
APPAREL・14 DAYS AGO
Cleveland Jewish News

American singer and songwriter Billie Eilish was targeted by anti-Israel bots on Instagram after promoting her new album in a video for MTV Israel, a new report by the entertainment industry group Creative Community for Peace (CCFP) revealed. In a clip shared on July 31, the 19-year-old singer told her...
WORLD・10 DAYS AGO
sneakernews.com

Nike Introduces The Air Sesh, A New Silhouette Designed For And By Dancers

Nike has made great strides to include all lifestyles, creating shoes for athletes of all kinds as well as the nurses on the frontlines every day. Here, their family only grows larger thanks to the newly debuted Air Sesh, a silhouette designed for and by dancers. The legendary Tinker Hatfield...
APPAREL・11 DAYS AGO
hypebeast.com

Following the sneak peek of the Air Max Terrascape Plus in a duo of colorways,. shaped up a new collection of its beloved Nike Air Max Plus dubbed the “Air Max Running Club.”. With the first variation named the “AMRC” as a nod to the collection, the design favors a...
APPAREL・10 DAYS AGO
ourcommunitynow.com

In terms of pop culture costumes, I have a feeling Billie Eilish will be on the top of the list, and it’s no surprise as to why. After the singer’s iconic Met Gala 2021 Marilyn Monroe-inspired gown, she’s been on everyone’s minds,
BEAUTY & FASHION・8 DAYS AGO