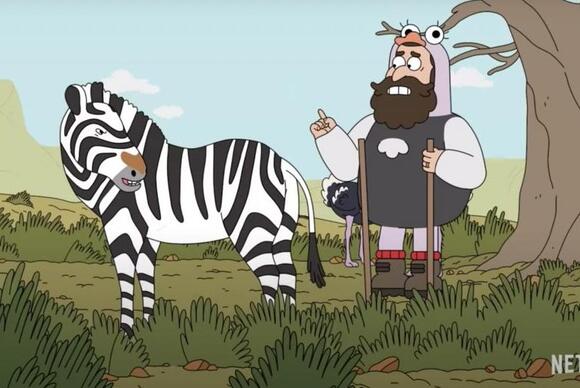 Sept. 22 (UPI) -- Netflix is giving a glimpse of the new series Adventure Beast.

The streaming service shared a trailer for the animated educational-comedy series Wednesday featuring Bradley Trevor Greive as a zoologist.

The preview shows Greive's character, his niece (Danice Cabanela) and assistant (Josh Zuckerman) explore the world while learning about and rescuing wild animals.

"Bradley takes on all kinds of questions about life in the animal kingdom, answering each with hilarious, unexpected facts that he knows like the back of his hand. In doing so, he provides plenty of human takeaway so we can live better lives," an official description reads.

Greive, who also co-created the show, is an Australian author and conservationist. He is known for the books The Blue Day Book and Tomorrow.

The dog was clearly scared when its collar mysteriously came off - and it's not the only strange thing to happen in the house.
ANIMALS・2 DAYS AGO
ComicBook

For as long as there have been animals, there have been animals that go extinct and disappear forever, but as audiences will see in the upcoming Mysterious Creatures with Forrest Gallante, there are a number of places where elusive animals can avoid detection, possibly proving that these species aren't so extinct after all. Sightings of these rare creatures will often result in reports of seemingly mythical beings, only for the truth to be much more exciting than fiction. Mysterious Creatures with Forrest Gallante debuts on Animal Planet on Sunday, October 17th and will be available on discovery+ on the same day.
ANIMALS・17 DAYS AGO
Anime News Network

Boneloaf has published a launch trailer (which also promotes the upcoming physical edition) for Gang Beasts, its multiplayer party game for Switch. The title landed on the system earlier today. Here’s an overview of the game:. Gang Beasts is a silly multiplayer party game with surly gelatinous characters, brutal slapstick...
VIDEO GAMES・10 DAYS AGO

Chakranadi returned to Disney's Animal Kingdom this past weekend, bringing live music back to the Asia land at the park. The 20 minute set features the impressive talents of the performer on the sitar and takes place most days - check My Disney Experience for the latest schedule. Watch the...
MUSIC・11 DAYS AGO
Siliconera

There’s a new Tales of Luminaria: The Fateful Crossroad anime trailer out. But it might look a little familiar. It is an extended version of the one released at the end of September 2021. This means people can learn more about Hugo and Leo and their relationship, as well as see the outcome of the fight.
COMICS・7 DAYS AGO
Decider

As autumn kicks into full swing, there’s nothing like a good period drama to watch with some warm tea under a blanket. We’re talking shows like The Last Kingdom, Alias Grace, etc. Hearty dramas that will keep you entertained as the daylight shrinks outside. The Last Kingdom is a fan-favorite, a British drama that originally premiered on BBC that was based on Bernard Cornwell’s The Saxon Stories. But if you’ve already watched all four seasons, you’re probably on the hunt for a new quest. We’ve got you covered.
TV SERIES・11 DAYS AGO
Anime News Network

Announced after 3rd series' finale with visual featuring Cheng Jiao. The 26th and final episode of the third Kingdom anime series ended on Sunday with an announcement that a fourth series will premiere next spring. A teaser visual featuring Sei Kyou (Cheng Jiao) also debuted with the tagline, "I'm next":
COMICS・5 DAYS AGO

It’s been over a year since we last heard about Cassette Beasts, a monster-fusing open-world RPG where players collect creatures to use in turn-based battles. The project has now resurfaced with the news that Raw Fury will be in charge of publishing. A new trailer has come in as well.
VIDEO GAMES・3 DAYS AGO
micechat.com

Seeking Adventure on Tom Sawyer Island at the Magic Kingdom

Is there anything more exciting than an adventure? In my eyes, the prospect of adventure is hard to beat. And that’s a big reason why Tom Sawyer Island is a classic Magic Kingdom attraction. While the version out at Disneyland has gone through significant changes over the years (Pirate’s Lair, and reductions to make room for Star Wars: Galaxy’s Edge), the Magic Kingdom attraction hasn’t had much change since its opening in 1973. With Walt Disney World celebrating its 50th anniversary, we figured this classic, but often overlooked, adventure should get a little love. Let’s go looking for treasure!
TRAVEL・7 DAYS AGO
orlandoparkstop.com

KiteTails at Animal Kingdom is a Delightfully Strange Little Show

If you spend a lot of time on social media, like myself, you may have seen some buzz about a new show that began running at Disney’s Animal Kingdom on October 1st. Disney KiteTails, as its name suggest, has large and impressive “kites” soaring around the water at the Discovery River Theater between Dinoland, U.S.A. and Asia. This 10-minute “activation” (as Disney calls it) is performed a half-dozen times a day, and is something cute that’s worth checking out if you happen to be in the area when it’s about to start.
LIFESTYLE・8 DAYS AGO
kennythepirate.com

We have missed our live entertainment shows since the parks reopened last year. Thankfully more are officially returning while others are still up in the air. We are hopeful new signs point to the return of this popular Magic Kingdom show!. Shows Returning. When Disney World reopened last July, entertainment...
LIFESTYLE・10 DAYS AGO

‘Back To The Outback’ Trailer: Aussies Isla Fisher, Eric Bana, Guy Pearce & More Star In A Down Under Animated Adventure

What is Australia, if not a hellish island desert of gorgeous people and insane deadly creatures, or oddball ones, most of which could kill you in a second? Australia and its colorful wildlife appear to be the focus of “Back To The Outback,” a new animated adventure comedy starring a who’s who of famous Aussie actors including Isla Fisher, Tim Minchin, Eric Bana, Guy Pearce, Miranda Tapsell, Angus Imrie, Keith Urban, and Jacki Weaver.
MOVIES・8 DAYS AGO
Flashbak

Beasts, Birds and Fishes : An Animal Alphabet for Boys & Girls

We love alphabets at Flashbak. And these are terrific illustrations from the 1855 book Beasts, Birds and Fishes : An Alphabet for boys & girls. Illustrated by British-born artist Charles Henry Bennett (1829-1867), the book was published on Philadelphia by Henry B. Ashmead. Bennett was a founder member of the...
BOOKS & LITERATURE・6 DAYS AGO
thrillgeek.com

We are so excited that one of our Walt Disney World holiday favorites is returning to Disney’s Animal Kingdom Theme Park. As a part of this year’s holiday entertainment, Discovery Island will spring to life once again with a Merry Menagerie of winter animals, realized in the form of life-size sculpted puppets. Reindeer, foxes, polar bears, penguins, and more interaction with guests, accompanied by serenading musicians as they create a cute display and playful atmosphere for guests. We absolutely love this holiday entertainment and are glad it will be returning this year.
TRAVEL・8 DAYS AGO
startattle.com

Today, Disney+ released the trailer for Diary of a Wimpy Kid, which begins streaming this holiday season. Can Greg Heffley survive middle school and achieve his dreams of being rich and famous? It looks like he's off to a rocky start? And not the Balboa kind. They captioned their post reminding everyone, "Diary of a Wimpy Kid: Official Disney+ Trailer. Here's what you need to know: don't get the cheese touch! Stream Diary of a #WimpyKid, an all-new Original Movie on December 3 on @disneyplus. ????"
MOVIES・3 DAYS AGO
GeekTyrant

A new trailer and two posters have been released for the action adventure fantasy film Alpha Rift. The film was written and directed by filmmaker Dan Lantz (Bloodlust Zombies, Bloodrunners), and it follows a Dungeons & Dragons fan who gets in over his head with a legacy he never could have dreamed of.
MOVIES・1 DAY AGO
NEWS CENTER Maine

PORTLAND, Maine — A new children's book follows along on an adventure through the forest, and helps readers better understand the importance of getting to know someone before you judge them. New England illustrator, Astrid Sheckels, is also the author of the Hector Fox series, starting with, Hector Fox and the Giant Quest.
PORTLAND, ME・1 DAY AGO
piratesandprincesses.net

What If … Iron Man was a Medieval Knight From Beast Kingdom?!

Tony Stark has been a lot of things. A hero, hologram, sorta-villain, mentor, icon, and now a medieval knight? We spotted a new action figure from Beast Kingdom today over at the Big Bad Toy Store. Yup, the company’s new Dynamic 8ction Heroes toy is Iron Man, envisioned as a knight from the days of yore.
MOVIES・2 DAYS AGO