By Rebecca Rubin
Variety
30 days ago 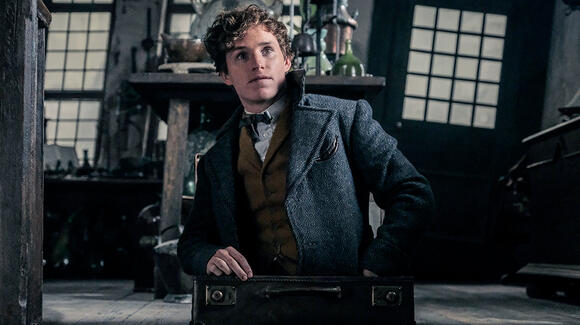 Warner Bros. is returning to its Wizarding World earlier than planned.

The next “Fantastic Beasts” installment, newly titled “The Secrets of Dumbledore,” will open in theaters on April 15, 2022. The third entry in the fantastical franchise was initially scheduled to release on July 15 of next year, but the studio opted to move its premiere up by three months.

Here’s the official logline: “Professor Albus Dumbledore knows the powerful Dark wizard Gellert Grindelwald is moving to seize control of the wizarding world. Unable to stop him alone, he entrusts Magizoologist Newt Scamander to lead an intrepid team of wizards, witches and one brave Muggle baker on a dangerous mission, where they encounter old and new beasts and clash with Grindelwald’s growing legion of followers.  But with the stakes so high, how long can Dumbledore remain on the sidelines?”

“Harry Potter” veteran David Yates is returning to direct the third movie. The prequel series — set decades before the adventures of Harry, Ron and Hermione — centers on magizoologist Newt Scamander (Eddie Redmayne), who becomes a confidant of a young Albus Dumbledore, portrayed by Jude Law, amid the rise of the Hitler-esque Grindelwald.

The third “Fantastic Beasts” movie made headlines last November when Johnny Depp exited the series, in which he portrayed the dark wizard Gellert Grindelwald, after Warner Bros. asked him to resign. Depp’s departure came shortly following the news he lost his libel case against The Sun, a British tabloid that published an article in 2018 alleging he was a “wife beater.”

J.K. Rowling, who has become a polarizing figure for her unsolicited comments against transgender people, wrote the scripts for the first two entries in the franchise: 2016’s “Fantastic Beasts and Where to Find Them” and 2018’s “Fantastic Beasts: The Crimes of Grindelwald.” Steve Kloves, who worked on many of the original “Harry Potter” movies, is co-writing the script for the third “Fantastic Beasts” film with Rowling.

The Scarlet Speedster is finally racing to movie theaters — and he’s bringing a couple of Dark Knights with him. Actor Ezra Miller debuted the first look at “The Flash,” director Andy Muschietti’s (“It”) feature adaptation of the fleet-footed DC Comics hero, during Saturday’s DC Fandome virtual fan event. (This is not to be confused with the ongoing CW series “The Flash” starring Grant Gustin, which was also featured during DC Fandome, and is certain to stymie search engine optimization experts across the internet.) “The Flash” movie will unlock the DC multiverse, as Miller’s Barry Allen moves with so much speed that he...
MOVIES・6 DAYS AGO
Variety

These five features alone net a box office gross well over $1 billion: “You, Me and Dupree” (2006) In one of her first efforts as a credited producer, Parent coached filmmakers Anthony and Joe Russo through the film that would become a commercial weigh station en route to their roles as directors of four entries in the Marvel Cinematic Universe. If it received only a lukewarm reception by Variety film critic Justin Chang, who called it “a middling third-wheel comedy elevated a couple of notches by the ineffably weird charms of Owen Wilson,” the film gave Parent a modest hit with $131...
MOVIES・2 DAYS AGO
Variety

Welcome to this week’s “Just for Variety.” Wonder Woman approves of Robert Pattinson as the new Batman and Zoë Kravitz as Catwoman! “Rob looks amazing,” Gal Gadot told me last night at Elle’s Women in Hollywood event at the Academy Museum when I asked if she had seen the new “The Batman” trailer. “I love his voice and I love the whole tone of everything. “And I love Zoë. She looks incredible. She’s a sweetheart. She’s a talented woman,” she continued. “And I’m so happy to have another female as a comrade.” So when does Gadot think we’ll see an all-female superhero movie with...
MOVIES・2 DAYS AGO
CNET

It's been 20 years since wrestler The Rock burst onto screens as the villainous Scorpion King, and now Dwayne Johnson is playing the bad guy again. In the first Black Adam footage, unveiled at DC Fandome on Saturday, Johnson takes on the power of Shazam as one of DC comics' baddest bad guys. "The truth is I was born to play Black Adam," Johnson said at the virtual fan event before the footage played, promising viewers huge action sequences and "breathtaking 'holy shit' scenes."
MOVIES・6 DAYS AGO

New Movies To Watch This Weekend On Amazon Prime, Netflix And In Theaters

Wondering what to watch over the weekend? Here's a list of newly released movies streaming online and in theaters. From horror to intense drama, we have got everything to suit your taste. The Manor. Directed by Axelle Carolyn, "The Manor" is a horror thriller streaming on Amazon Prime. The movie...
MOVIES・13 DAYS AGO
Insider

THEN AND NOW: The cast of 'The Lord of the Rings'

Whether they're action-film actors like Orlando Bloom or award-winning stars like Cate Blanchett, here's what the trilogy's cast has been up to.
MOVIES・2 DAYS AGO
UPI News

Getting a movie adaptation of a popular book right is a massive challenge: get it wrong, and a series' devoted following won't be happy. It's even more challenging if that book is especially complex, and hasn't historically made the leap to the big screen with much creative success or cohesive storytelling.
MOVIES・4 DAYS AGO

Emily Blunt is in talks to star in Universal’s “Oppenheimer,” an upcoming World War II movie from director Christopher Nolan. Though nothing is official, the casting would reunite Blunt with her “A Quiet Place Part II” co-star Cillian Murphy, who will portray the title role of J. Robert Oppenheimer in the film about the development of the atomic bomb. Blunt is expected to play the wife of Oppenheimer, the American physicist who was pivotal in the Manhattan Project. Universal Pictures and reps for Blunt didn’t respond to request for comment. Murphy and Nolan have worked together on several films, including “Batman Begins,” “Inception” and...
MOVIES・2 DAYS AGO
IGN

The Legend of Vox Machina – an animated show based on D&D webseries Critical Role – will be released for Amazon Prime Video on February 4, 2022. We also got a first look at the show's combat-heavy opening title sequence. Announced during New York Comic-Con, the cast of Critical Role...
TV SERIES・14 DAYS AGO
digitalspy.com

The latest trailer for the fourth season of Star Trek: Discovery has been unveiled by Paramount Plus, along with its release date. The trailer was unveiled today (October 9), by series star Sonequa Martin-Green during the series' New York Comic-Con panel. The upcoming season's official key art, featuring Martin-Green as Captain Michael Burnham, was also debuted during the panel.
TV SERIES・13 DAYS AGO
SPY

How to Watch Dune Online When It Hits Theatres This Week

The wait is almost over. Ever since the big-screen adaptation of Frank Herbert’s sci-fi masterpiece, Dune, was announced in 2018, fans have been counting down the days until the $165 million, Budapest-shot film hits theatres. Now, it’s only a matter of days. For those who need a refresher, the Dune novel originated in 1965 and is now considered one of the best-selling science fiction tomes in history. It takes place on the fictional planet of Dune in the year 10,191. An entire universe of characters, planets, and complex beings make up the action-packed story, which is said to be the inspiration...
MOVIES・2 DAYS AGO

Celebrating his birthday, Bruno Mars hopped on Twitter to offer a bit of good news. Along with Anderson .Paak, Bruno Mars announced that the highly-anticipated Silk Sonic album will arrive on November 12. Titled An Evening With Silk Sonic, the project will feature previously released singles like “Leave The Door Open” and “Skate.” The duo have not shared any features yet, but it appears that Bootsy Collins will have a hand in putting out this project as well.
MUSIC・12 DAYS AGO
/Film

our no-frills, zero B.S. guide to when and where you can watch upcoming movies and shows, and everything else you could possibly stand to know. Folks, the campaign to get Kristen Stewart an Oscar begins now. For those of us who haven't been living under a rock since the early 2000s, it's abundantly clear that the former "Twilight" punchline has gone above and beyond to prove her worth as an immensely talented actor in her own right. After starring in films like "Clouds of Sils Maria," "Personal Shopper," and "Seberg," Stewart has her eyes firmly set on Academy Award gold with the upcoming Princess Diana biopic titled "Spencer." With the film's release date ticking closer and closer by the day, we've compiled everything you need to know about what "Spencer" is about and when and where you can watch it.
MOVIES・9 DAYS AGO
GamesRadar+

M. Night Shyamalan's next movie gets a title and new release date

M. Night Shyamalan's next movie has a title and a new release date. The film will be called Knock at the Cabin, and will be released by Universal Pictures on February 3, 2023 (H/T Deadline). The film was previously set for release on February 17, 2023. Shyamalan posted a short...
MOVIES・8 DAYS AGO
d1softballnews.com

During the event DC FanDome, the highly anticipated event dedicated to the world, cinema, comics and not only of the DC house, we had the opportunity to discover some more information and details about Aquaman 2. The new film with Jason Momoa and directed by James Wan he was in fact the protagonist of a dedicated panel. In addition to a behind-the-scenes look, we were able to find out that the release date of Aquaman 2 and the December 16, 2022.
MOVIES・6 DAYS AGO
Variety

As India’s Viacom18 Studios completes “Laal Singh Chaddha,” its Aamir Khan and Kareena Kapoor Khan-starring Bollywood adaptation of “Forrest Gump,” plans are afoot to further mine Paramount’s IP. “There are a couple of other titles that we are evaluating closely, but of course a lot of our focus and bandwidth is currently consumed by ‘Laal Singh Chaddha’,” Ajit Andhare, COO, Viacom18 Studios told Variety. The film’s production was impacted by COVID-19. It needs some more time for the finishing touches and consequently, the release date has shifted from Christmas 2021 to Valentine’s Day 2022. Once it’s done, the team will consider the...
MOVIES・9 DAYS AGO
TVGuide.com

The Netflix Top 10 Movies list is the only way to see which films are the most popular on the streaming service, because Netflix still doesn't release viewership numbers. Why are you keeping all these secrets, Netflix? What are you hiding? The Netflix Top 10 Movies list for Thursday, Oct. 21 has a new No. 1, the just-released Night Teeth. It's a vampire flick about a human driver who chauffeurs a pair of partying bloodsuckers around Los Angeles, but finds out something bigger is going on. The only other new entry to the list is the 2018 action stinker Reprisal, starring Bruce Willis and Frank Grillo as a couple dudes hunting down a bank robber. Scary Movie 4 is riding the Halloween wave up to No. 4, but it still can't top the Dutch WWII movie The Forgotten Battle (No. 2) and grandpa bank robbers comedy Going in Style.
MOVIES・1 DAY AGO
Variety

The “John Wick” prequel series at Starz, “The Continental,” is rounding out its main cast with five new additions. Mishel Prada (“Vida”) will play KD; Hubert Point Du-Jour (“Blindspot,” “Madame Secretary”) will play Miles; Jessica Allain (“The Laundromat,” “Thriller”) has been cast as Lou; Nhung Kate (“Swapping Fate,” “The Better Man”) has been cast as Yen; and Ben Robson (“Animal Kingdom,” “Vikings”) has been cast as Frankie. The five join previously announced series lead Colin Woodell as well as cast member Mel Gibson. “The Continental” will explore the origin behind the titular hotel-for-assassins through the eyes and actions of Winston Scott (Woodell), who...
TV & VIDEOS・3 DAYS AGO