Conor McGregor delivers the 'most devastating first pitch ever seen' 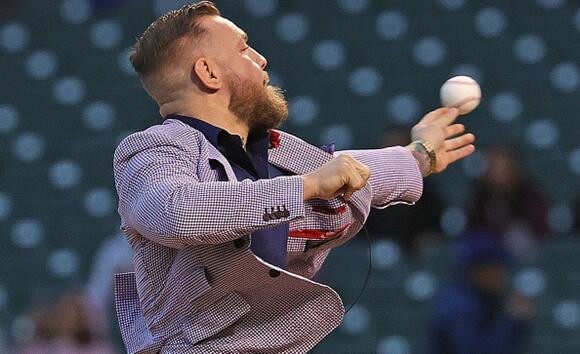 "The most devastating first pitch ever seen in the iconic Wrigley Field," McGregor called his throw. "The venom is there. The power is there. It's a little off accurate-wise."

He was dressed in a dapper suit when he stepped to the mound to make the throw.

After a short wind-up, the southpaw fighter launched his pitch far right of home plate and almost hit a fan.

McGregor attributed the lack of accuracy to a leg injury he suffered in a July loss to UFC Lightweight Dustin Poirier.

"You know, I'm on the one leg. You can see me base fully on the left leg that was just recently injured," he said. "I'm happy with that. I'll take that on board, yeah."

Despite the poor mechanics, McGregor felt he throws as hard as the Major League Baseball pitchers he saw during the game, he said.

"If you could measure the power, I don't think there was much power difference between mine and them out there. Just the accuracy is a little off," he said. "It was either lob it friendly or aim to take him off his feet, and if that was on target, we would have had a problem, I'd say."

Tuesday's appearance was McGregor's first baseball game, and the Dublin native said he felt at home at Wrigley Field.

"For me, it just feels like one big Irish pub," he said.

The former two-division champion admired the condition of the historic stadium and said he loved the experience.

"This stadium has been around, and it's seriously well kept. I love the red brick. I love the ivy," McGregor said. "[I'm] having a great time, I have to say, the kids are loving it as well."

Maybe if he didn’t wear such tight clothes he would of had room to throw straight. Embarrassing!

Not sure why this dude was ASKED to throw a baseball? What is going on with this GENERATION......

Trump expected to attend Game 4 of World Series in Atlanta

Former President Donald Trump is expected to attend Game 4 of the World Series in Atlanta on Saturday.
ATLANTA, GA・2 HOURS AGO
WashingtonExaminer

The MLB team in Cleveland, which recently announced it would change its name from the Indians to the Guardians after this season, was sued by a roller derby team for using the Guardians moniker.
MLB・6 HOURS AGO
SPORTbible

Dana White has shared his thoughts on Conor McGregor leaking an official UFC document which revealed the huge pay-per-view buys for his rematch against Dustin Poirier. McGregor took to social media to share a UFC receipt, confirming the buy-rate for UFC 257 in January 2021. Per the image, McGregor vs....
UFC・21 DAYS AGO
Bloody Elbow

Dustin Poirier might be bitter rivals with Conor McGregor but ‘The Diamond’ admits that ‘The Notorious’ is a ‘special individual’ in the world of combat sports. Poirier, who beat McGregor via first-round TKO (doctor’s stoppage) at UFC 264 to close out their trilogy 2-1, claims the Irishman is without a doubt the hardest puncher he’s ever faced.
UFC・15 DAYS AGO

Conor McGregor is enjoying some R&R down in Miami. The former two-division UFC champion was photographed Sunday looking relaxed in a Krusty the Clown T-shirt and butterfly shorts. The exclusive photos, obtained by The Post, show McGregor smoking what is described as a “hand-rolled cigarette.”. McGregor was also spotted with...
UFC・23 DAYS AGO
SPORTbible

Conor McGregor has finally broken his silence since he allegedly punched a well-known Italian DJ in the face while on a night out in Rome, breaking his nose in the process. But if you thought the wild Irishman was going to issue some sort of apology to Francesco Facchinetti, then you'd be wrong.
UFC・9 DAYS AGO
Yardbarker

Dana White’s net worth is quite ridiculous – and it dwarfs that of UFC superstar Conor McGregor, according to figures provided in a report by the Daily Star. There has been an ongoing debate over whether UFC fighters are paid as much as they’re worth. There is a clear disparity...
UFC・6 DAYS AGO
MMAmania.com

Conor McGregor hates the music industry. To be fair, he also hates the transportation department, wireless phone carriers, and members of AARP, which may explain his public meltdowns over the last few years. It’s a shame we no longer get that same energy inside the Octagon. McGregor was back in...
MUSIC・9 DAYS AGO

It’s all kicking off on social media this week as Tony Ferguson, Nate Diaz, and Conor McGregor all want to fight each other. Ferguson called out McGregor on Thursday, which prompted Diaz to call out Ferguson the following day. Then McGregor, who is tied 1-1 with Diaz, replied with the...
COMBAT SPORTS・5 DAYS AGO
MMAWeekly.com

Former UFC champ-champ, Conor McGregor, was busy in Italy having his children christened in the Vatican and then getting himself involved in yet another assault allegation. And it wouldn’t be a full-circle combate news day if Jake Paul didn’t insert himself into the conversation as well. Shortly after news broke...
PUBLIC SAFETY・9 DAYS AGO
thefocus.news

Who is DJ Francesco Facchinetti after alleged altercation with Conor McGregor?

This is a Sentiment Analysis of Conor McGregor's Twitter timeline from 2018 until now. Data points to a drastic change of sentiments in 2020. Some may Believe it was course that lead to Porrier fight incident! What do you think?
UFC・11 DAYS AGO

Conor McGregor is back in the news, and once again, it’s for an alleged incident that took place outside of the Octagon. The Italian DJ Francesco Facchinetti has reportedly accused McGregor of punching him this past weekend in Italy. According to reports, including one from Pro Sports Extra, Facchinetti claims he and his wife were spending time with McGregor and the latter’s fiancee, Dee Devlin.
PUBLIC SAFETY・10 DAYS AGO
MiddleEasy

Conor McGregor is in the headlines for the wrong reasons once again. This time, he’s reportedly assaulted an Italian DJ named Francesco Facchinetti. Facchinetti claimed he and his wife were handing out with McGregor and Dee Devlin until the Irishman attacked him without provocation at around 2:30am. As a result,...
PUBLIC SAFETY・10 DAYS AGO
hotnewhiphop.com

Conor McGregor is currently recovering from a leg injury, although that doesn't exactly mean he can't fight. According to TMZ, McGregor and his wife were in Rome this weekend, where he was hanging out with famous DJ Francesco Faccinetti and his wife. While the evening was going smoothly, Faccinetti claims that McGregor ended up striking the DJ in the face, pretty well unprovoked. It was a shocking turn of events for the DJ, who ended up getting his nose broken.
COMBAT SPORTS・10 DAYS AGO
MMAWeekly.com

Former two-division UFC champion Conor McGregor draws a crowd everywhere he goes while visiting Italy and walking the streets of Rome. “The Notorious” posted a video and phots on social media during his Italian visit showing scores of fans trying to take pictures and get a glimpse of the Irishman. He had a similar experience in California leading up to his UFC 264 trilogy bout against Dustin Poirier in July.
UFC・10 DAYS AGO

Conor McGregor is back on the offensive on Twitterland, taking aim at Khabib Nurmagomedov and Dagestani culture. Since 2016, there has been no love lost between Conor McGregor and Khabib Nurmagomedov. At one time, the tension between the two was mostly competitive in nature, but that would all change ahead of their UFC 229 bout two years later.
UFC・14 DAYS AGO
fightsports.tv

Conor McGregor Claims To Be Richer Than Entire UFC Roster

The “Notorious” Conor McGregor never spares a moment to showcase his wealth to the public. McGregor topped Forbes’ list of the highest paid athletes from May 2020 to this past May. He cashed out at $180 million, and he has achieved all this during a period of mere a decade.
UFC・14 DAYS AGO
firstsportz.com

5 times when Conor McGregor had a fight outside the octagon

UFC’s biggest superstar Conor McGregor has lived up to his name “The Notorious One” on several occasions. McGregor has managed to be on the wrong side of the law time and time again. In recent times, the number of times McGregor has made the headlines for doing something violent outside the octagon is countless.
UFC・6 DAYS AGO
miamilaker.com

Students at Mater Academy in Hialeah Gardens filled the Lion’s Den with screams to welcome UFC fighter and former champion Conor McGregor. McGregor visited the middle/high school at 7901 N.W. 103rd St. on Sept. 23 to honor six student-athletes for their scholarship and community service. The event was sponsored by the charity Buddy’s HELPERS in partnership with the PepsiCo Foundation, and TIDL Sport, an athletic performance product company which partners with McGregor.
UFC・14 DAYS AGO