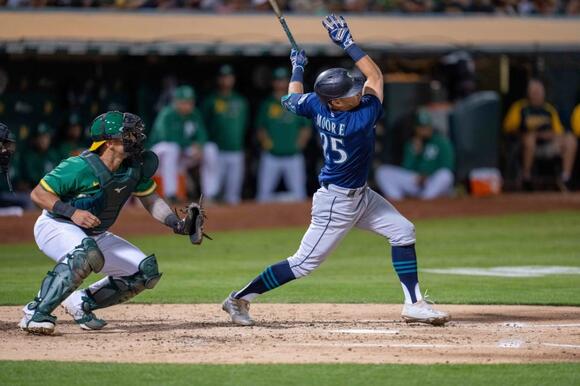 J.P. Crawford homered with one out in the ninth for the Mariners (82-69), who have won the first two games of the four-game series to pull even with the A’s (82-69) for second place in the American League’s West Division. Seattle and Oakland are three games back in the race for the AL’s second and final wild-card playoff berth.

Gonzales (9-5) went six innings and allowed two runs on four hits, with the runs coming via solo homers by Matt Olson and Starling Marte. The left-hander walked one and struck out three.

Right-hander Drew Steckenrider pitched the ninth for his 10th save of the season.

The Mariners tied it in the second as Jake Bauers was hit by a pitch with one out and Tom Murphy grounded a single into right field. Both runners advanced on a groundout by Jake Fraley and Bauers scored on Blackburn’s errant pickoff attempt. 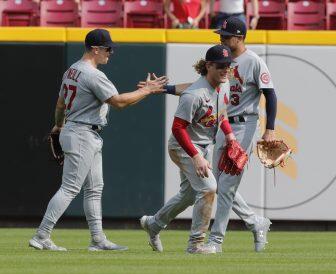 Seattle took the lead with a three-run fourth. Jarred Kelenic led off with a triple to center and Fraley drew a two-out walk. Dylan Moore hit a two-run triple to left-center and Crawford grounded a single to center to make it 4-1.

Marte led off the bottom of the inning with a homer to center on a 2-1 pitch.

Marte doubled with two outs in the eighth off right-hander Paul Sewald and the Mariners intentionally walked Olson to bring the go-ahead run to the plate, but Sewald struck out Matt Chapman to end the inning.

Seattle Mariners: Making a Trade with the Colorado Rockies

The Seattle Mariners had an outstanding year in 2021. Finishing with their first 90 win season since 2003, the Mariners find themselves approaching the most pivotal offseason in recent memory. With core pieces J.P. Crawford, Ty France, and Logan Gilbert already contributing to the major league ball club, the Mariners have a chance to make significant additions to the team in order to supplement an already stellar young core.
MLB・8 DAYS AGO
FanSided

There’s been a lot of talks starting up already about what the Mariners should do in the upcoming offseason. Most of it revolves around spending money and a lot of it. How much could we actually expect them to spend? In order to try and answer that, we need to look around the league to see how much others are spending and see what is actually going to be on the books for the Mariners in 2022.
MLB・13 DAYS AGO
Sportsnaut

The Major League Baseball world is without a true legend. The wife of All-Star catcher Ray Fosse announced on Wednesday
NFL・12 DAYS AGO
bainbridgereview.com

If you were one of the 44,164 folks who attended the Mariners final Saturday game of the season a couple of weeks ago, consider yourself among the lucky. The Seattle baseball club ultimately fell short of its admirable effort to reach the postseason for the first time since 2001, but its run of 11 wins in 13 games to reach the final weekend of the season with a chance to be a wild card made plenty of cynics into believers, even if just for a short time.
SEATTLE, WA・11 DAYS AGO

We are less than a month away from the biggest offseason in recent history for the Seattle Mariners. Coming off of an unexpected 90-win season, plus President of Baseball Operations Jerry Dipoto being given the green light to spend big in free agency, Mariners fans are brimming with excitement for what’s to come.
MLB・9 DAYS AGO
FanSided

You may not be able to watch the Seattle Mariners in the MLB postseason, but there’s a very good chance you could see a future Mariners player or two if you tune into the three series that remain to be played. Coming off Seattle’s first 90-win season since 2003, the...
MLB・10 DAYS AGO
bizjournals

Former Seattle Mariners outfielder Ken Griffey Jr. joined the ball club's partnership group, making him the first player to own a piece of the franchise. "As I said in my Hall of Fame speech, I’m very proud to be a Seattle Mariner," Griffey said Monday in a news release announcing the move. "I’m excited for this incredible opportunity to join John [Stanton] and the rest of the Mariners partnership group. This is a dream come true because of the relationship I’ve always had with the team, its fans, and the city of Seattle."
MLB・14 HOURS AGO

Why the Seattle Mariners Should Trade for Jose Ramirez

The Seattle Mariners are in the market for a third baseman this offseason, as Kyle Seager’s option is almost certainly not being picked up. This leaves a hole at third base for the first time in a decade for the Mariners. However, this is an exciting time for Mariners fans and there is a superstar third baseman out there who the Mariners should be interested in this offseason: his name is Jose Ramirez.
MLB・1 DAY AGO
papercitymag.com

CHICAGO — Jose Altuve does not need a champagne bath. Or a big clubhouse party Right now, the man who powers baseball’s most underrated modern dynasty just wants a hug from his wife, So that is what Altuve looks for when he gets back onto the field after a spirited, but brief and anything but over-the-top Astros clubhouse celebration.
MLB・13 DAYS AGO
News-Democrat

In a stunning move made eight days after the conclusion of their season, the St. Louis Cardinals dismissed manager Mike Shildt on Thursday, chairman Bill DeWitt Jr. and President of Baseball Operations John Mozeliak announced. “We have determined that we have a philosophical difference in the direction that our Major...
MLB・11 DAYS AGO
The Spun

Few Major League Baseball teams entered the 2021 regular season with more hype and expectations than the San Diego Padres. Unfortunately for the Padres, few teams – if any – were more disappointing over the course of the season than San Diego. San Diego is 78-82 on the season. The...
MLB・23 DAYS AGO

Chris Sale was called upon for the Boston Red Sox in Game 2 of the ALDS against the Tampa Bay Rays in what was his first postseason start since the 2018 World Series. Sale did not turn back the clock with a vintage performance but rather had an outing that he sure would like to forget.
MLB・16 DAYS AGO
MLB

MLB.com is keeping track of all the latest news and rumors surrounding three-time Cy Young Award winner Max Scherzer, who can become a free agent this offseason. Scherzer labored in his National League Wild Card Game start against the Cardinals on Wednesday, walking three batters and throwing 94 pitches over 4 1/3 innings, but he limited St. Louis to one run and the Dodgers advanced on Chris Taylor's walk-off homer.
MLB・18 DAYS AGO
New York Post

Joey Gallo’s girlfriend is happy to have his undivided attention after his season ended on Tuesday night. Following the wild-card game — which ended in a 6-2 Yankees loss to the Red Sox — Claire Danko shared a PDA snap from the past of her with the Yankees outfielder. “I...
MLB・19 DAYS AGO
scoopswithdannymac.com

Bernie On The Cardinals: Shildt Could Have Avoided Being Fired, But He Failed To Read The Room.

I wrote a book-length column on this topic on Friday, but there’s still plenty to discuss about the Cardinals’ decision to fire Mike Shildt. 1) On Monday Shildt displayed class, and nothing but class, in his first official public statement since his dismissal last Thursday. In his first post-Cardinal message, delivered through “invited media,” Shildt took the expected tone, one with grace and humility. He had no interest in stirring the pot.
MLB・7 DAYS AGO
FanSided

The Los Angeles Dodgers’ 2021 season ended with a thud. They had the highest of expectations coming into this year and, somehow, so many things went wrong. From Clayton Kershaw and Max Muncy going down right before the postseason to Trevor Bauer and Dustin May missing more than half the year to the San Francisco Giants coming out of nowhere to win 107 games, the Dodgers did their best to keep pace, but it wasn’t enough.
MLB・1 DAY AGO
Sportsnaut

The Los Angeles Dodgers were in a load of trouble long before star third baseman Justin Turner collapsed in a heap, but the optics of his late-game injury certainly didn’t help matters in NLCS Game 4. After all, it’s difficult to muster up one more rallying cry when your de...
MLB・3 DAYS AGO
Larry Brown Sports

Former St. Louis Cardinals manager Mike Shildt may not be down on his luck for long. Dennis Lin of The Athletic reported Sunday that the San Diego Padres are expected to interview Shildt for their managerial opening. The interview will be Shildt’s first since he was fired by the Cardinals last week.
MLB・8 DAYS AGO