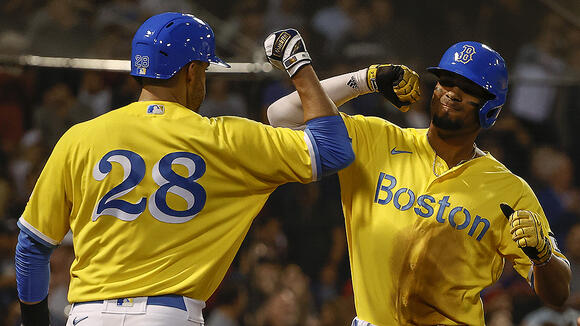 BOSTON (CBS) — The Red Sox are on a roll, though they haven’t exactly looked like the “Red” Sox for most of the team’s six-game win streak. And that will continue until this streak comes to an end.

Four of Boston’s six straight victories have come at home, and in each of those wins, the team has been wearing their yellow “City Connect” uniforms. The team hadn’t worn the special Boston Marathon-themed unis since Patriots’ Day weekend in April, but brought them back to start their final homestand of the 2021 regular season.

When the win streak kept going though, the team decided to stick with the yellow and blue threads. So there they were again, donning in the uniforms Tuesday night to start a two-game set against the New York Mets.

After erasing an early 2-0 deficit to earn a 6-3 comeback victory, you better believe the superstitious Sox will be wearing those uniforms again Wednesday evening. They’ve decided that they’ll continue to look like highlighters until this win streak comes to an end.

“Hey, we’re on a good run,” said shortstop Xander Bogaerts, who drove in four of Boston’s six runs on Tuesday. “As of now, I don’t anticipate us changing it for tomorrow. I don’t know about the next day, but hopefully tomorrow we have that thing on again.

“If we win tomorrow, you know, hopefully we see it the next day also,” added Bogaerts. “I know it’s not white and red. I know we’re not the ‘Yellow Sox.’ But we need wins right now. So if it’s yellow, it’s yellow.”

The uniforms were met with mixed reactions when they were unveiled earlier this season. But no one seems to mind the different look at the moment — as long as the team keeps picking up wins at the most important time of the year.

“In here, we have some smart people,” said Bogaerts. “I think they made the right choice of putting on the yellow, and hopefully tomorrow we wear the yellow again.”

This six-game win streak is Boston’s longest since an eight-game streak that stretched from the end of June to the start of July. The team shook off a 12-16 August to start September 12-6, and they’ve won 18 of their last 29 games overall. This home cooking likely would have come whether they were wearing their yellow uniforms or not, as the Sox are 38-18 at Fenway Park over their last 56 home games.

“It’s good. It’s fun. We had our good stretches, we had our rough stretches, but this is a good time to be winning ball games,” said Bogaerts. “Hopefully this will continue. We just have to maintain the way we’re playing with the effort level and the energy level.”

Boston has four games remaining on their current homestand, with one more against the Mets on Wednesday night before starting a three-game set against the New York Yankees on Friday. As long as the wins keep coming, the team will continue to take the field in those bright yellow unis.

If the Boston Red Sox are going to take down the New York Yankees in the American League Wild Card Game tonight, they’ll need to do it without star slugger J.D. Martinez. Martinez was not included on Boston’s roster for the AL Wild Card Game due to a sprained left ankle. He suffered the injury in the fifth inning of Boston’s regular-season finale on Sunday.
MLB・21 DAYS AGO
NJ.com

The internet never forgets. Former New York Yankees slugger Alex Rodriguez has been covering the 2021 MLB playoffs by resuming his role as a studio analyst for FOX Sports. Last week, Rodriguez was analyzing the American League Division Series between the Boston Red Sox and Tampa Bay Rays with David Ortiz, Frank Thomas and Kevin Burkhardt. The gang was discussing a video clip from Game 1, when the Rays were seen eating popcorn in the dugout during the seventh inning of their 5-0 win.
MLB・13 DAYS AGO
ClutchPoints

The New York Yankees flamed out of the 2021 MLB postseason after getting wrecked by the Boston Red Sox in a 6-2 American League wild-card game loss at Fenway Park on Tuesday. The Yankees crashing and burning against their fiercest rival and despite a luxurious payroll only add fuel to an offseason that’s going to have them answering plenty of questions, including whether the team’s future would still include veteran outfielder Brett Gardner — at least until the end of the 2022 MLB season.
MLB・20 DAYS AGO
Larry Brown Sports

Ex-MVP has message to haters about Jose Altuve

Jose Altuve has probably heard more boos during the MLB postseason than any other player in the league. The fan treatment stems from his role in the Houston Astros’ cheating scandal, but one former AL MVP thinks the critics need to pipe down. Minnesota Twins third baseman Josh Donaldson, who...
MLB・4 DAYS AGO

Jose Altuve was targeted by Boston Red Sox fans with a profane chant during Game 3 of the ALCS at Fenway Park on Monday night. Red Sox fans could be heard chanting, “f— Altuve” during Game 3. The chants began early in the game, according to reporters in attendance. The chants continued even in the third inning after Altuve was unable to pick a throw that bounced into second while covering the bag.
MLB・7 DAYS AGO
The Spun

Why There Was Such A Long Delay In Astros vs. Red Sox

A long delay took place during Saturday’s Game 2 of the ALCS between the Houston Astros and Boston Red Sox. Boston jumped out to a commanding 4-0 lead in the top of the first on a J.D. Martinez grand slam off of Astros SP Luis Garcia. It was almost just as ugly in the top of the second.
MLB・9 DAYS AGO
cw39.com

HOUSTON (KIAH) – The Houston Astros will be looking to bounce back from another big loss in the American League Championship Series as they will face the Boston Red Sox in Game 4 on Tuesday night. The Red Sox pounded the Astros 12-3 in Game 3 on Monday to take a...
HOUSTON, TX・7 DAYS AGO
CBS Boston

A Red Sox Jinx? Tickets For Potential World Series Games At Fenway Are On Sale

BOSTON (CBS) — As if it had a crystal ball, Major League Baseball is already offering tickets to potential World Series games at Fenway Park. They went on sale Friday at 10 a.m., before anyone could know which teams would be playing in the series. “I think that they should have waited until they figure out who’s going to play. That definitely could be some bad karma for sure,” said Damaseau Santiago-Danielli, a fan who was shopping in the souvenir store when the tickets went up for sale. “I know they have to sell the tickets, but let’s win it first,” said...
MLB・3 DAYS AGO

By now you've undoubtedly heard about the Tampa Bay Rays eating popcorn in the dugout while beating the Red Sox in Game 1 of the American League Division Series. Unsurprisingly, it did not sit well. But when it comes to the irritating consumption of celebratory foodstuffs, popcorn actually finished second...
MLB・14 DAYS AGO
whdh.com

BOSTON (WHDH) - According to Major League Baseball, there are less than 20 Puerto Rican players across the league — the Boston Red Sox has two stars and a manager from the island territory and the affection for their home shows. Red Sox Manager Alex Cora has always been proud...
MLB・10 DAYS AGO
NECN

Boston Red Sox fans flocked to Fenway Park Thursday to see off the team as they left for Houston and the American League Championship Series against the Astros. Manager Alex Cora and pitcher Tanner Houck stopped to sign a few autographs on the way out. Game 1 is Friday night...
MLB・11 DAYS AGO
NESN

How Do Red Sox Continually Overcome Adversity? ‘It’s Part Of The City’

The Boston Red Sox weren’t supposed to be celebrating a trip to the American League Championship Series — let alone celebrating on Marathon Monday in the middle of October. After all, sportsbooks had the Red Sox winning roughly 80 games in the regular season, and they were as high as...
MLB・14 DAYS AGO

BOSTON -- Enrique Hernandez hit a walk-off sacrifice fly in the ninth inning as the Boston Red Sox eliminated the Tampa Bay Rays with a 6-5 victory in Game 4 of the American League Division Series on Monday, punching their ticket to the AL Championship Series. Christian Vazquez led off...
MLB・14 DAYS AGO
FanSided

The Boston Red Sox clinched the ALDS on a pair of walk-offs. The Boston Red Sox are advancing to the American League Championship Series! After getting shut out to open the series, Boston broke out their big bats for a decisive victory in Game 2 to split the games in Tampa Bay. The Red Sox returned to Fenway Park where they clinched the series in dramatic fashion.
MLB・14 DAYS AGO
Empire Sports Media

The New York Yankees postseason ended with the loss in the wild card game against the Boston Red Sox. The Red Sox have conquered the Tampa Bay Rays in the ALDS and will face the winner of today’s Astros White Sox game. Going into the game the Houston Astros are ahead in the series two games to one. A win today would send the Astros to the ALCS. The Astros won the game 10-1, dominating their rivals from the north.
MLB・13 DAYS AGO
FanSided

Boston Red Sox: Rafael Devers is custom made for October

It was that one swing of the bat that electrified the Fenway Park crowd and that one smile that energized the Boston Red Sox as they did the unthinkable in eliminating the Tampa Bay Rays. In launching the 3-run blast that gave the Red Sox an early 3-0 lead in...
MLB・14 DAYS AGO

Who do the Red Sox want to play in the ALCS?

The Red Sox, by virtue of their second straight walk-off win on Monday, are guaranteed a spot in the ALCS, the first of four teams to punch their ticket to MLB’s semifinals. The only thing left to be determined is just who they’ll be playing in the series. That will come down to the ALDS between the White Sox and Astros, a series which Houston leads two games to one. That could end as soon as Tuesday afternoon as the two sides play Game Four at 2:07 PM ET after it was rained out on Monday. Boston will certainly be rooting for Chicago to win this game in order to force one extra game out of whoever they play, but beyond that, who should they be hoping to win the series? Let’s compare the two sides.
MLB・14 DAYS AGO
FanSided

No matter what the final outcome of this series against Tampa Bay or the season is, it’s time to realize that the 2021 Boston Red Sox is a throwback to the 2004 team and give credit. This version of the Sox has become a special one reminiscent of one not...
MLB・14 DAYS AGO
FanSided

Just like that, the Boston Red Sox are on to the American League Championship Series. On an electric night at Fenway Park, American League Divisional Series hero Kiké Hernández drove in the winning run as the Red Sox eliminated the Tampa Bay Rays on an exciting Marathon Monday in the city of Boston.
MLB・14 DAYS AGO
Boston

Hernández has dominated opposing pitching in the postseason thanks to tweaking his positioning in the batter's box, according to Red Sox hitting coach Tom Hyers. Red Sox center fielder Kiké Hernández is doing things no one has in the Major League Baseball postseason, which, mind you, has taken place for a few decades. And boy, has it been fun watching him do it.
MLB・8 DAYS AGO