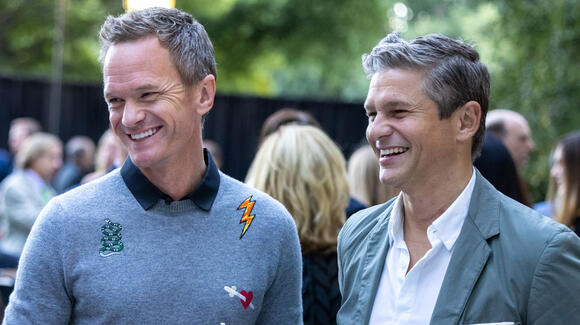 “Over the past year and a half, all of us have liked to say, ‘the Delacorte isn’t empty. It’s full of hope that we’ll all be together again,’” The Public’s board chair Arielle Tepper said before the final performance of this summer’s “Merry Wives” Monday evening. “I just love when hope becomes a reality.”

On Monday, to celebrate “ Merry Wives’” last bow and to fete the donors who keep the nonprofit breathing, the Public held its annual gala on the lawn of Central Park. Attended by guests like Neil Patrick Harris, David Burtka, Jesse Tyler Ferguson, Jane Krakowski, David Harbour, Rachel Dratch, Jenn Colella and Krysta Rodriguez, the gala marked The Public’s return to performances this summer.

Of course, exactly what Shakespeare that New Yorkers consume at the Delacorte — and whether that public offering meets the diversity and vibrancy of its city — is a constant charge levied on the New York institution: While gala attendees and donors lined up for the open bar and sat down to dinner served in picnic baskets fit for Central Park and COVID safety, the Shakespearean company preparing behind the scenes were set elsewhere, in a Senegalese and West African community in Harlem.

“Merry Wives,” an adaptation of Shakespeare’s “Merry Wives of Windsor” by playwright Jocelyn Bioh and the Public’s associate artistic and resident director Saheem Ali, sets the comedy amid the African diaspora, amending the script to include contemporary language and removing the play’s many xenophobic and racist jokes, fodder for a drunk Elizabethan audience.

“I’m just not interested in straight Shakespeare anymore, and that’s it,” Ali told Variety at the gala, reflecting on the choice to so liberally adapt the comedy. “If I see Shakespeare and there’s been no attempt to make it speak to the current world, I’m not interested. I’m bored. Today, it’s the adaptive process that makes Shakespeare feel alive.”

Oskar Eustis , the Public’s artistic director since 2003, told Variety that Ali’s insistence toward adaptation — enough, imaginably, to ruffle a few dramaturg’s feathers — wasn’t radical, but a necessary mission for the Public.

“Shakespeare has never been straight,” he said. “The script isn’t the art form. It’s the performance. When people say straight Shakespeare, they usually mean what the 1950s thought Shakespeare looked like. The theater is always and everywhere in a specific time and place, and so you’re always interpreting. The only question is how conscious are you going to be about it, and how inclusive?”

At the gala, Eustis, one of only three leaders to guide the Public after Papp, said that mission, larger than the plays themselves, has challenged the Public this past year.

“The Public has always proclaimed collectivist, inclusive, collaborative values,” he said , steps from the Delacorte’s doors. “Yet we’ve always been run like a dukedom. There’s always been the guy — whether that was Joe or George [C. Wolfe] or me. And so now, in the last phase of my career, the biggest thing I can do is find a different mode of leadership that gives diverse voices a seat at the table, regardless of the show.”

Inside the theater, where the gala’s guests gathered to take in the final performance after dinner, Gail Papp, the late founder’s wife and producing partner, who in many ways founded the field of dramaturgy, read from her husband’s writing in summary: “As William Shakespeare widely said, ‘The city is the people.’ And to that I say, Amen.”

Samara Joy knows how to command a room. After years of observing jazz champions like Sarah Vaughan and Ella Fitzgerald from behind her computer screen and through crackling records, the 23-year-old Bronx native has become a gem of her own in New York’s modern jazz scene. Her 2022 Verve Records debut, “Linger Awhile,” is up for best jazz vocal album at the upcoming Grammys, and is both classic and fresh — which is why it also garnered the singer recognition in the best new artist category. Having developed her vocals in echoey church choir halls, Joy’s performances have become intrinsic...
NEW YORK CITY, NY・23 HOURS AGO
Variety

Spanish-language TV giant TelevisaUnivision wants a bigger audience for its annual upfront presentation to advertisers. The company intends to expand its in-person event during TV’s Upfront Week to a bgigger venue. Executives felt the 2022 pitch drew more people than it could accommodate. On Tuesday, May 16, the company will hold an event at Pier 36 in New York City — with a streaming option for those who cannot attend. “The cultural firepower of U.S. Hispanics is indisputable, and more brands than ever are making the commitment to invest in this audience,” said Donna Speciale, president of U.S. advertising sales and marketing...
NEW YORK CITY, NY・2 HOURS AGO