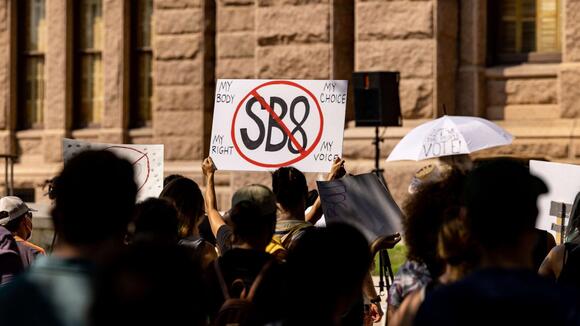 The first tests of Texas' unprecedented and highly controversial scheme for enforcing a ban on nearly all abortions have come from two non-Texans -- both former lawyers disbarred for alleged misconduct who are effectively inviting courts to invalidate the law on constitutional grounds.

Oscar Stilley, a former Arkansas attorney, brought one of the two civil suits filed Monday in Bexar County District Court against a San Antonio abortion provider who publicly admitted to performing an unlawful procedure. Stilley is in custody of the Federal Bureau of Prisons on a 15-year sentence for tax evasion and conspiracy, according to the complaint posted on his personal website .

Felipe N. Gomez, an Illinois attorney, brought the other suit; he is currently suspended from the state's bar over accusations of sending harassing and threatening emails, records show .

"In some ways the identity of these first plaintiffs highlights the absurdity of the law," said Kate Shaw, Cardozo School of Law professor and ABC News legal contributor.

Gomez is a self-described "pro choice plaintiff," according to the two-page complaint obtained by ABC affiliate KSAT , and explicitly asked the court to strike the law, SB8, down.

SB8 prohibits abortions after about 6 weeks of pregnancy in Texas and allows "any person, other than an officer or employee of state or local government," to bring a civil suit against someone believed to have "aided or abetted" an unlawful abortion.

"The statute says that anybody can file a suit. That doesn't mean that there's not some state constitutional limitation on who could file a suit," said Irving Gornstein, executive director of the Supreme Court Institute at Georgetown Law Center, "but this person seems to be somebody who has no objection to abortions, he just wants to earn a bounty."

Stilley, who is seeking to claim a minimum $10,000 reward, and Gomez, who says he is not seeking any financial damages, both sued Dr. Alan Braid, an OB-GYN based in San Antonio, who publicly acknowledged in an op-ed on Sept. 6 that he had performed a first-trimester abortion in express violation of state law.

"I acted because I had a duty of care to this patient, as I do for all patients, and because she has a fundamental right to receive this care," Braid wrote . "I fully understood that there could be legal consequences -- but I wanted to make sure that Texas didn't get away with its bid to prevent this blatantly unconstitutional law from being tested."

The U.S. Supreme Court voted 5-4 on Sept. 1 to allow SB8 to take effect on procedural grounds, despite what the majority acknowledged as "serious questions" about constitutionality. The justices did not address those questions.

Legal experts said the new civil cases are now "vehicles" for state and federal courts to examine the substance of SB8 itself -- the near total ban on abortions across the state -- and ultimately suspend enforcement of the measure as in violation of longstanding Supreme Court precedent.

"There will eventually be an appeal up from one of these civil judgments," said Paul M. Smith, a veteran Supreme Court litigator and vice president of the Campaign Legal Center, "and at that point it's hard to imagine what the jurisdictional problems would be that would prevent it from being decided. But that could take a while."

Smith cautioned that procedural quirks to SB8 in how it is enforced -- effectively deputizing the populace at large -- may continue to complicate the options judges have to block the law across the state rather than in limited instances.

"Dr. Braid is going to win," said University of Texas constitutional law professor Steve Vladeck in a post on Twitter. "The problem is that his victory won't bind anybody else, and won't prevent other plaintiffs from bringing the same claims over and over again. That's by design."

"That's why the real key here is relief that bars suits to enforce SB8 from even being brought -- whether by blocking the plaintiffs from bringing them or by blocking the courts from filing them," he added.

Over the last three weeks, there appears to be a concerted effort within the anti-abortion rights community to stop people from filing lawsuits under SB8 in order to preserve the status quo. Since the law took force, it has had a chilling effect on clinics across Texas and forced women seeking abortion care to consider extraordinary measures out of state.

"The main anti-abortion groups are ... telling people not to file suit until the Supreme Court decides (the major abortion rights case out of Mississippi)," said Gornstein. That case -- Dobbs v. Jackson Women's Health , set for argument in December -- asks the justices to squarely reconsider 50 years of abortion precedent since the 1973 decision in Roe v. Wade.

In the meantime, the Justice Department is suing Texas in federal district court , seeking a sweeping injunction against the law across the state, asserting the government's "profound sovereign interest" in ensuring Americans' constitutional rights "remain redeemable in federal court." A hearing is set for Oct. 1.

"These complaints that are being filed in Texas state courts are likely to proceed in parallel," said Shaw. "So I think sooner rather than later, perhaps both state and federal courts will be weighing in on the substantive constitutionality of this law, ultimately giving the US Supreme Court the chance to review one or more of these cases."

SANTA FE, N.M. (AP) — Actor Alec Baldwin fired a prop gun on the set of a Western and killed the cinematographer, officials said. The director of the movie was wounded, and authorities are investigating what happened. Halyna Hutchins, cinematographer on “Rust,” and director Joel Souza were shot Thursday in...
SANTA FE, NM・4 HOURS AGO
The Associated Press

ST. PETERSBURG, Fla. (AP) — The FBI on Thursday identified human remains found in a Florida nature preserve as those of Brian Laundrie, a person of interest in the death of girlfriend Gabby Petito while the couple was on a cross-country road trip. The remains, a backpack and notebook believed...
FLORIDA STATE・16 HOURS AGO
Reuters

Oct 21 (Reuters) - The U.S. Centers for Disease Control and Prevention (CDC) on Thursday recommended the COVID-19 vaccine boosters for recipients of the Moderna Inc (MRNA.O) and Johnson & Johnson (JNJ.N) shots, and said Americans can choose a different shot from their original inoculation as a booster. CDC director...
PUBLIC HEALTH・12 HOURS AGO
ABC News

Queen Elizabeth was hospitalized Wednesday night for "preliminary investigations," a Buckingham Palace spokesman confirmed to ABC News. The queen was back at her desk at Windsor Castle by Thursday afternoon and undertaking light duties. No other details about the queen's condition are currently available. "Following medical advice to rest for...
CELEBRITIES・16 HOURS AGO

The House has voted to hold Bannon in contempt. Here's what happens next.

The House of Representatives voted Thursday to find former adviser to President Trump Steve Bannon in criminal contempt for defying a subpoena from the House select committee investigating the January 6 attack on the U.S. Capitol. He was called to appear before the committee last week but failed to appear.
CONGRESS & COURTS・3 HOURS AGO
Reuters

NEW YORK, Oct 21 (Reuters) - The Pfizer (PFE.N)/BioNTech COVID-19 vaccine showed 90.7% efficacy against the coronavirus in a clinical trial of children 5 to 11 years old, the U.S. drugmaker said on Friday. Sixteen children in the trial who had received a placebo got COVID-19, compared with 3 who...
MEDICAL & BIOTECH・1 HOUR AGO
Reuters

WASHINGTON, Oct 22 (Reuters) - Americans can choose a COVID-19 booster shot that is different from their original inoculation but the recommendation is to stick with the vaccine they got first if it is available, White House chief medical adviser Dr. Anthony Fauci said on Friday. "It's generally recommended that...
PHARMACEUTICALS・2 HOURS AGO
CBS News

A Haitian gang leader has threatened to kill 17 members of a U.S. Christian missionary group being held hostage in the lawless Caribbean nation. In a video posted to social media on Thursday, a man believed to be the leader of the "400 Mazowo" gang says he'll shoot the 16 Americans and one Canadian, including five children, if his group's demand for $1 million in ransom for each hostage is not met.
PUBLIC SAFETY・2 HOURS AGO

The former president has been banned from several platforms.
POTUS・1 DAY AGO
CNN

After a pair of scandals, Fed bans officials from buying stocks

New York (CNN Business) — The Federal Reserve announced new trading rules on Thursday following a controversy over trades made by senior officials. The Fed said the new rules will ban policymakers and senior staff from buying individual stocks and bonds and will restrict active trading. The central bank pledged to also increase the frequency of reporting and public disclosures.
U.S. POLITICS・19 HOURS AGO