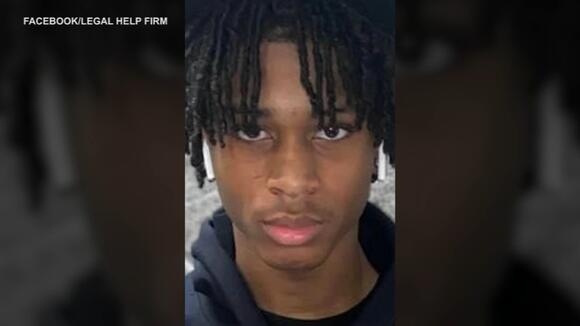 A shooting in Chicago's Chatham neighborhood killed a 15-year-old boy Tuesday afternoon, according to CPD. Chicago police said the teen was in front of a business in the 8300-block of South Holland, just down the street from Simeon High School, at about 2:40 p.m. when a black car approached and someone inside opened fire. The boy was struck in the chest and taken to University of Chicago Hospital in critical condition, where he later died, police said. "Growing up in Chicago, you hear about it, you see it all the time. For you to open fire in a crowd of students..." said Aie'rianna Williams, Simeon student. Simeon students identified the boy as Jamari Williams, a player on the junior varsity football team. They said the shooting happened during an afterschool gathering. A Simeon student said Tuesday is an early dismissal day, where students are let out at 2:20 p.m. The area where the shooting happened is frequented by students, she also said, who often hang out at the Potbelly and GameStop and other stores. "It's heartbreaking. They call it the Simeon curse because we lose a student every year. When is it going to stop? Because we all know when we graduate it's not going to stop. We're going to hear about it again, and again. It's tiring," Williams said, breaking into tears. "Just stop, like, just stop." Arguably Simeon's most famous and tragic shooting happened to Ben Wilson , the country's leading basketball player who was gunned down during lunch in 1984.

The brothers of slain Simeon High School basketball star Ben Wilson are turning to forgiveness after their brother's death.

The crime scene seemed to be concentrated in front of the BMO Harris Bank at the location, but police said the shooters sprayed the parking lot with multiple rounds. "We heard the sound and saw people running," said an employee at a GameStop store near the shooting who declined to be named. "Kids were leaving school and then it happened." The manager of a Potbelly was pulling into the restaurant parking lot when she heard gunshots and saw the teen lying on the ground in front of a bank. "I heard it but couldn't see it. He was on the ground," said the manager, who declined to provide her name. "Everyone knows that Simeon students come to JJs after school," Williams said. "We go to potbelly, Walmart. Everybody knows. So for you to sit there and fire 12 rounds, they could hit anybody, not just your target. It's heartbreaking. What if that was somebody you knew? That's not right at all." Chicago police said no one is in custody. Area Two detectives are investigating the shooting. The Sun-Times Media Wire contributed to this report.

I stopped watching the news a while ago and tried to keep from reading certain types of articles on this app. I started feeling a sense of sanity. Now I'm upset with myself for reading this. It is truly depressing what is going on in these streets. What's even sadder is that it's happening country wide. Be safe people and stay prayerful

now Lightfoot wants to spend 150 million dollars on improving bike lanes in the city to protect cyclist but what is the city spending to protect our children?

Stop hating! Hate Lightfoot for throwing cops under the bus. Hate that emptyheaded woman for releasing those over and over again criminals. Hate our open borders and cartels taking your kids cuz that is how Mexico, South America got in. Hate those machine Democrats for a change!

A carjacking in West Englewood resulted in a crash that seriously injured a young father who was simply an innocent bystander.
CHICAGO, IL・14 HOURS AGO
ABC 7 Chicago

Chicago carjacking: 1 in custody after SUV taken at gunpoint crashes on South Side

Officers with Chicago's carjacking task force arrested a suspect after a crash on the South Side Wednesday morning.
CHICAGO, IL・1 DAY AGO

Azul de la Garza was shot seven times while sitting inside their car last month in West Elsdon after a day spent with their mother.
CHICAGO, IL・2 DAYS AGO
ABC 7 Chicago

Chester Weger's attorney says DNA testing on hairs found on the victims could rule out his client as the killer.
CHICAGO, IL・1 HOUR AGO
ABC 7 Chicago

Paul Shiro's past as a cold-blooded Chicago Outfit killer is coming back to haunt him.
CHICAGO, IL・16 HOURS AGO
ABC 7 Chicago

A mother and her teenage son were both injured in a carjacking in Chicago's West Town neighborhood Monday evening shortly after a man was injured in a car theft nearby, police said.
CHICAGO, IL・2 DAYS AGO

A passerby captured the brave actions of South Loop Peet's Coffee customers, who tackled and held down a would-be tip jar thief who attacked an employee.
CHICAGO, IL・17 HOURS AGO
ABC 7 Chicago

All three locations of Parlor Pizza were shut down Wednesday afternoon for what appears to be a financial investigation.
CHICAGO, IL・20 HOURS AGO
ABC 7 Chicago

In the video, you can see the victims carrying a child to safety inside a fast-food restaurant.
CHICAGO, IL・2 DAYS AGO
ABC 7 Chicago

Police are involved in a standoff with a suspect at a Holiday Inn Express in northwest suburban Algonquin.
ALGONQUIN, IL・20 HOURS AGO

A man who spent three months living in a secured terminal at Chicago's O'Hare International Airport instead of flying home to India as he had planned has been acquitted on a felony trespassing charge.
CHICAGO, IL・5 HOURS AGO
ABC 7 Chicago

Siblings of the man identified as a victim of the notorious serial killer John Wayne Gacy say their family is shocked but grateful to police who used DNA to confirm his fate.
CHICAGO, IL・1 DAY AGO
ABC 7 Chicago

A man has died after he was shot and crashed into a building on Chicago's Northwest Side Monday morning, police said.
CHICAGO, IL・3 DAYS AGO
ABC 7 Chicago

Lemont Township barricade situation: 1 in custody after hours-long standoff in home with child

A man is in custody after an hours-long standoff in a barricaded home in Lemont Township that involved a child.
LEMONT, IL・1 DAY AGO
ABC 7 Chicago

John Wayne Gacy was convicted of killing 33 young men and boys in the Chicago area in the 1970s.
CHICAGO, IL・2 DAYS AGO
ABC 7 Chicago

A group of supporters, including his mother and Reverend Jesse Jackson, gathered in downstate Illinois to demand answers in light of the coroner report on Jelani Day's death.
PERU, IL・1 DAY AGO
ABC 7 Chicago

It's the first year in at least 30 years that the city has recorded more than 25 homicides, according to reports.
PEORIA, IL・3 DAYS AGO